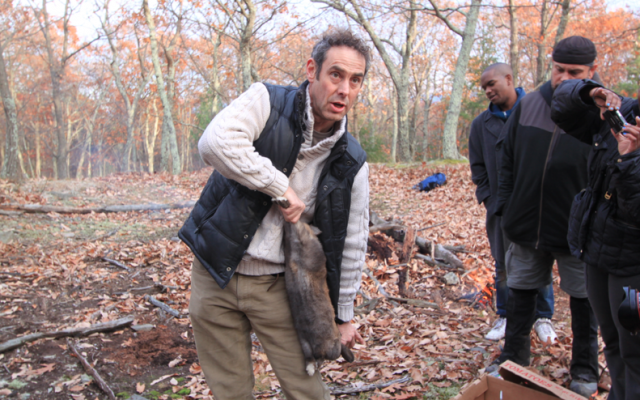 “Just slit the throat, cut the anus, and let it all fall out.”

Not exactly the first words you want to hear after walking into a cabin full of strangers you’ll be locked up with in the woods for the next 48 hours. What the hell did I sign up for?

Most single 20-something girls in New York City spend their Friday nights prowling the clubs in short skirts and high heels. But I started mine standing on a dark street corner in the Bronx, waiting to hitch a ride upstate with a complete stranger for a wilderness survival workshop. I wasn’t sure if I should expect to be dumped in the middle of nowhere Bear Grylls style or what. After all, I live in Manhattan where I’m used to getting anything I want at any time, and for the right price, there’s always someone to do my dirty work for me. The closest to “survival mode” I’ve ever come while living in the concrete jungle was hunting down mice in my apartment, or boiling a pan of water to wash my face when the hot water went out. So when I walked into this cabin to hear two guys discussing the gory details of how we’d be killing tomorrow night’s dinner, I began to question whether or not I was ready for it.

I pretended not to overhear them and went to introduce myself to Kay, the workshop organizer. She’s a natural leader with wild hair and an even wilder personality, who’s always the first one daring people to do something crazy. When I nervously tried to make myself seem like more of a badass by poking fun at her, I immediately regretted the words the second they came out of my mouth. She fired back by listing all of the injuries and surgeries she’s had thanks to her adventurous side—trumping them all and silencing the conversation with “and then my uterus fell out.” Then she told me who those two equally insane guys were who were discussing dinner details in the corner—Jamie, a retired British Army officer, and Wild Dog, a jack-of-all-trades survivalist who purposely gets lost all over the globe, scares off bears with his bare hands, and forgoes showers for weeks on end by the looks (and smells) of it. They were our instructors for the weekend.

When I’d read in the workshop description that a British Army Officer would be teaching us, I was expecting a drunken Churchill-esque man, showering us with spit as he shouted at us to use our teeth and tear the flesh off of live animals until blood spilled down our chins. Instead, Jamie was an ordinary looking suburban dad type with crazy grey hair, a charming smile, and flashy L.L. Bean style. His dainty accent made him seem anything but intimidating, and he even helped do the dishes every night after our group dinner. Mad Dog on the other hand looked like he’d just walked in from a week of roughing it in a pile of leaves outside the cabin, with his thick matted beard and thinning ponytail hiding most of his face.

Saturday morning came, and after a warm shower I joined the rest of the group to learn how to track and hunt animals by their footprints and scat trails. Since it’d take some time to actually track and kill an animal in the wild, Kay went to the market to buy a rabbit while the rest of us followed random piles of shit around the woods. We came across traces of deer scat and a questionable pile that I’m pretty sure was from Mad Dog. They were right, this was nowhere near as easy as tracking mouse droppings in my apartment. We’d probably starve to death before we ever found, trapped, and killed anything to eat. 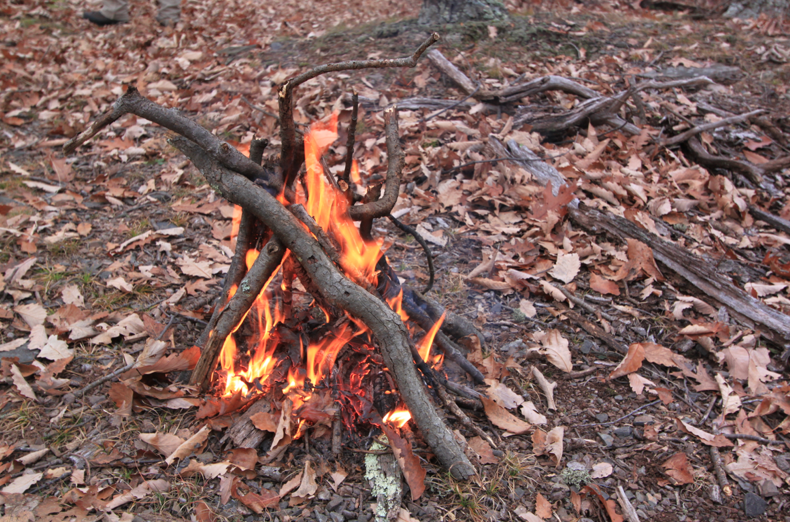 My first fire—which nearly burnt down the entire area since I forgot to clear the leaves.

I was off building my very first fire from sticks and dried leaves when Kay arrived with a box.

“Now I know we’re not supposed to play with our food, but does anyone want to see what’s for dinner tonight?” Kay said as she opened the box. Suddenly it all became real.

I was imagining one of those generic, rabid looking yard rabbits you shoo from eating vegetables in the garden. Instead she pulled out this huge floppy-eared bunny with a shiny, healthy coat of fur, whose only fault was putting his trust in us not to harm him. As people gathered around to hold the rabbit, I knew this was exactly what we weren’t supposed to do. Pet him. Become friends with him. Look into his big chocolatey eyes. Treat him like a pet. Name him Mr Floppy. And yet here we were, hugging Mr Floppy and assuring him everything would be okay. Good to know this group of strangers was full of liars. 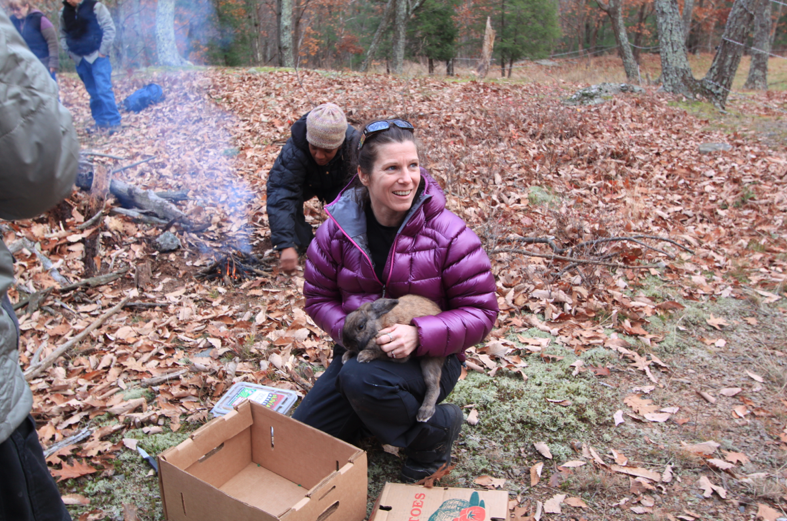 I made the mistake of making eye contact with Mr Floppy and immediately started planning how I could free him while making it seem like an accident. Seeing ten fires around him, he looked as though he knew what was about to happen. I could have looked away and continued working on my fire, ignoring the fact that an innocent bunny was about to be murdered 20 feet away. But instead I found myself pushing past everyone, and next thing you know I was front row with my camera. 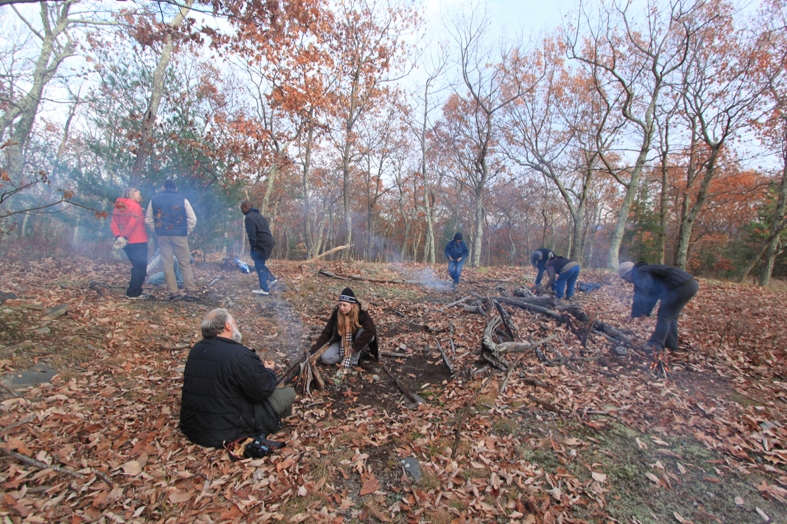 Now don’t get me wrong, I love meat. It tastes amazing, it’s fun to play with raw, and the marbleized cuts are worthy of framing and hanging on a wall. But as an animal loving child who couldn’t even throw away stuffed animals for fear of hurting their feelings, I’ve managed to continue loving meat by completely ignoring any stories of how animals are raised, treated, or killed before they make their way to my mouth. Thankfully once that slab of meat is unrecognizable as an animal, it was never a living creature as far as I’m concerned. But the thought of actually watching a cuddly living thing take its last breath as its heart stops beating, just for the sake of a delicious meal, is a bit much for me. It’s best if I leave that part to someone else.

As Jamie elaborated on how to catch a rabbit in the wild, my mind wandered back to that initial conversation I’d heard: “slit the throat, cut the anus, and let it all fall out.” Oh shit. Things were about to get messy. What would happen when he slit the throat? Would blood squirt from the aorta and hit my camera lens? What about everything that “falls out” after he cuts the anus? Is that going to spill out in a pool of red blood, like a warm liquid piñata?

Then he grabbed the rabbit from the box and I instinctively pressed record. Just as quickly, Mr Floppy was dead. It was uneventful, anti-climatic and almost humane. I had envisioned Jamie, with his tongue out Gene Simmons style, grabbing Mr Floppy by the ears and slitting his throat while he was still alive, his whole body spilling out organ by bloody organ onto the leaves below. But there was no blood at all, he just stretched the poor thing to death like a defective Stretch Armstrong doll.

Once Mr Floppy was proclaimed dead, we all watched in silence as his body twitched and convulsed on the ground atop the dead leaves. I wasn’t convinced he was dead, and I thought about pressing pause to try and resuscitate him. But I kept recording.

Emptying the organs wasn’t exactly the gushing outpour of crimson chunks that I was expecting either. Everything was neatly packed into the body like it had been elegantly gift wrapped. Though he never slit the throat, Jamie grabbed a knife and cut the underside, starting at the anus. Still, no blood came pouring out. He reached in and grabbed the bladder, which looked like a latex water balloon full of urine, and lay it on the ground. It was perfectly dry on the outside, no blood or liquid of any sort. Then he pulled the intestines out carefully like a string of used anal beads as his hands started to get covered in blood. The slimy strand dropped to the ground as he removed the kidneys, then the perfectly healthy lungs that suggested Mr Floppy was an admirable non-smoker, before finally reaching way up inside, almost turning Mr Floppy into a headless puppet, and pulling out the heart.

It was still beating. What. The. Fuck.

Mr Floppy was not dead, yet he just had his body cut open and all of his organs pulled out like a high school science project. I almost puked, but I kept recording.

Jamie insisted he was dead and proceeded to cut the meat out as everyone passed around the bloody beating heart. Well no shit he was dead now, his entire body was disassembled on the ground. The two wallflowers of the group snatched up the organs and disappeared somewhere off on their own to grill them up. Jaime tossed Mr Floppy’s signature ears into a hole along with other non-edible body parts and carried the rest back to the cabin to be prepared for dinner. I finally stopped recording and put out my fire. 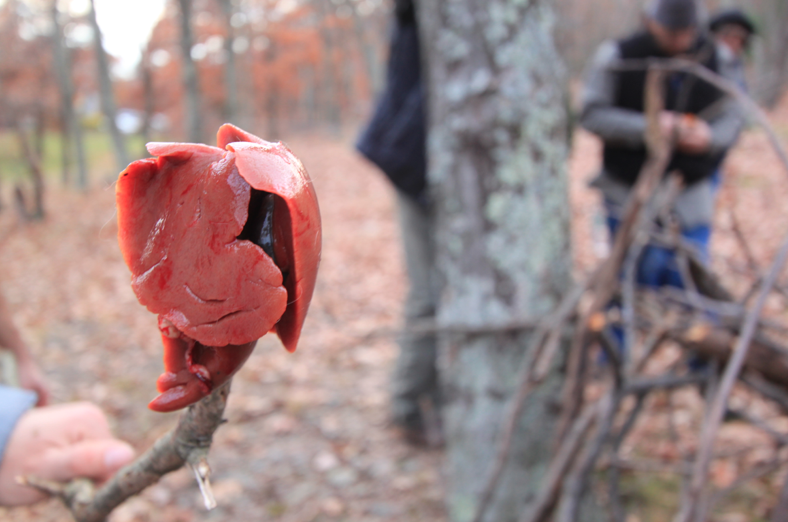 That night I wasn’t feeling very hungry while we waited for dinner to be served. But apparently I was the only one feeling a bit queezy from what we’d seen. Before the dish even made it out of the kitchen, all of those heartless carnivorous beasts had practically devoured the whole thing. I forced myself to try one bite in an attempt to convince myself that killing Mr Floppy was justifiably necessary for survival. But the meat was tough, sliding between my teeth like a rubber chicken for several minutes before I was able to swallow. I’m convinced it was Mr Floppy’s way of getting revenge, making me chew over his dead body for just as long as I sat recording his autopsy while he was still alive.

After this experience I’m even more convinced that I could never kill an animal, let alone with my bare hands. I guess I wouldn’t know for sure unless I was in a real life-or-death situation, but seeing as I can hardly open a stubborn jar, I doubt I’d have the strength to stretch a rabbit to death. I’d probably injure it just enough to leave it paralyzed and whimpering on the ground while I cried hysterically and apologized to its immobile body.

Maybe I should stick to the streets of New York City for now, and keep ordering my meals from Seamless. I think it’s safe to say I wouldn’t make it very long trying to survive in the wilderness. Nor would I have the heart to selfishly kill an animal for my own survival.

But then again, maybe I’m not as sensitive as I think considering that I recorded the whole thing.

Scuba Diving Round 2: Swimming with Hammerheads

I was really looking forward to doing a redemption dive in the Galapagos Islands—just one kickass dive to erase all the bad...
Continue Reading