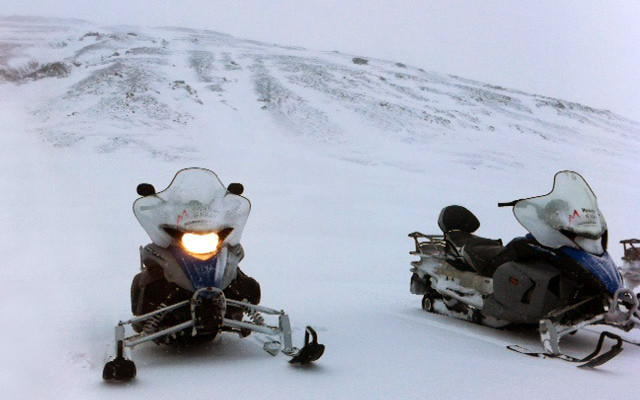 Despite my gigantor size list of things to see in Iceland, I figured I’d wait to see what my friends were up for before making any definite plans. Turns out they weren’t nearly as inclined to conquer the Icelandic wilderness as I was.

This left me scrambling to figure out what I could realistically do and what would have to wait until next time. But how do you choose between hiking across volcanoes and glaciers, and snowmobiling across endless snowy terrains? Or walking through lava fields and ice caves, licking glaciers at Jökulsárlón, or photographing black sand beaches, Landmannalaugar, and Eyjafjallajökull (the difficult, but not impossible to pronounce volcano that shut down European air travel back in 2010)?

Every small tour I came across required at least two people to book. Even though it’s something I commonly encounter as a solo traveler, I started getting angry that I was spending time inside looking for things to do when I should be out exploring. So I booked the first one I found that allowed a single passenger.

When the bus arrived in the pitch black, pouring rain at 830AM, it wasn’t a 6-8 person SUV. It was an entire busload of tourists. And we were going to the ultra-touristy Golden Circle. But there was snowmobiling on a glacier so I was happy.

I’ll post more about the Golden Circle later because well, you can read about that pretty much anywhere. And making the trip on a rainy day with a busload of tourists isn’t exactly the most intimately fascinating experience as you can imagine.

Just to be clear, this day was supposed to be epic. And snowmobiling on a glacier was supposed to give me excellent footage on my first adventure with my new GoPro camera.

About 35 of us hopped off the bus and packed into a freezing cold truck to head out to the snowmobiling site. There wasn’t exactly a road to follow, just a few yellow markers sticking up from the snow. The further we got out the more the wind and snow picked up and the more I started to wonder if my three layers and snowboarding pants and coat wouldn’t be enough. Then I looked around the bus to see what everyone else was wearing and noticed two girls dressed in skinny jeans and pea coats and I was reassured, though I couldn’t help but wonder if they got on the wrong bus. 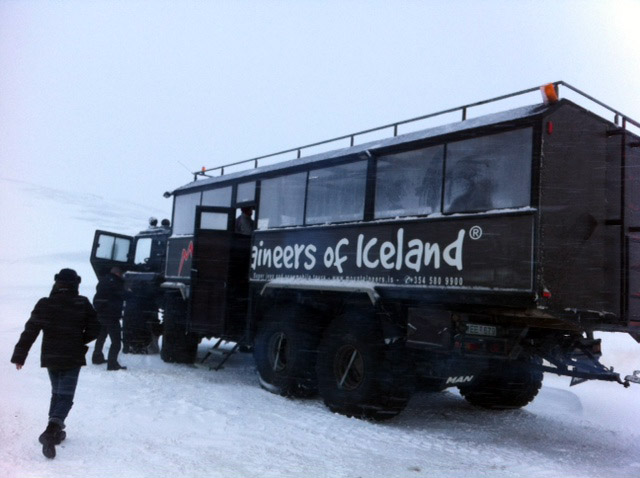 Boarding the bus to go out to the snowmobile site. 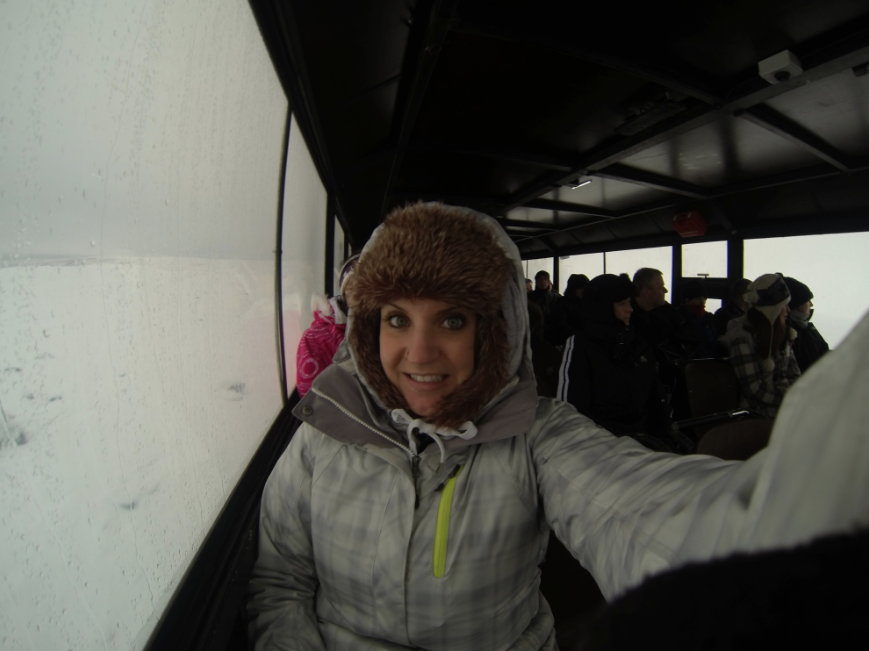 Despite that animal on my head, here I am freezing as we sat for 20 mins waiting to drive out to the middle of nowhere.

When we reached the cabin to layer on our snowsuits the wind really started to pick up. So much that it was actually hard to stand upright. After about 45 minutes spent suiting up and a quick weather-related safety lesson we set out on our way.

Getting ready to snowmobile on Langjökull Glacier from Just Visiting on Vimeo. 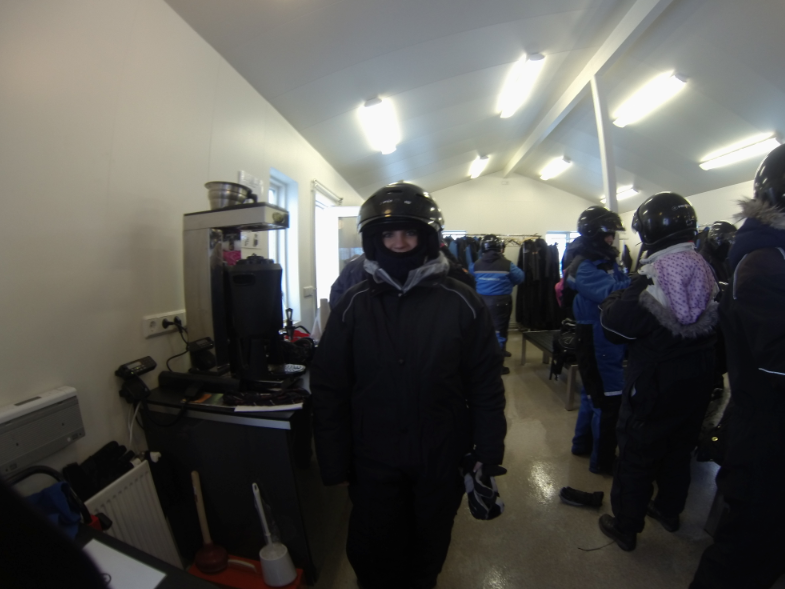 That’s me in there, feeling warm, fat, and indestructible.

Finally we set out in a single file, the wind and sleet blowing at our backs and pounding against our helmets. I strapped my GoPro to my head, turned that bitch on, and took off, ready to face this storm that was just waiting to welcome us. The first 10 minutes were pretty uneventful, lots of stop and go followed by complete white-outs until everyone got used to driving a snowmobile. Unfortunately this was about the time that my GoPro randomly shut off. (Still trying to figure out if that was weather related or hardware/software related.)

Oh, and remember the girls I said looked like they were dressed for a completely different tour? They were right ahead of me and must’ve missed the part about leaning against the snowmobile because I saw them hit a hill, go flying in the air and fall on their side, landing on the driver’s leg. In all fairness you couldn’t tell where the hills were and it was literally impossible to see ANYTHING unless you flipped your visor up and suffered the ice pellets attacking your eyeballs. I probably should’ve stopped to make sure they were okay, but that’s what the tour guides are for right? So I kept going with some fearless Asian kid up further ahead who kind of tested out the path ahead so I was free to speed up and have some fun.

Needless to say the video sucks, but just in case you’ve ever wondered what it’s like to snowmobile on a sheet of white paper, wonder no more. All I can say is it’s similar to flying an airplane through the clouds. Once you lose sight of the person in front of you, you somehow lose all sense of direction and have no idea which way is up, down, left, or right, which is probably the weirdest feeling I’ve ever experienced.

Snowmobiling on Langjökull Glacier from Just Visiting on Vimeo.

The blizzard went on for about 35 minutes, then once it let up we made our way to a resting point behind a mountain for a quick break before heading back against the wind. I managed to snap a few iPhone pics while we were stopped, but the GoPro was still unresponsive. Ugh. 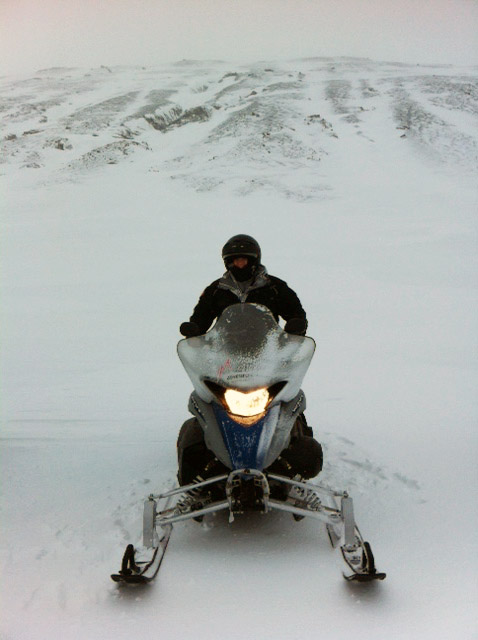 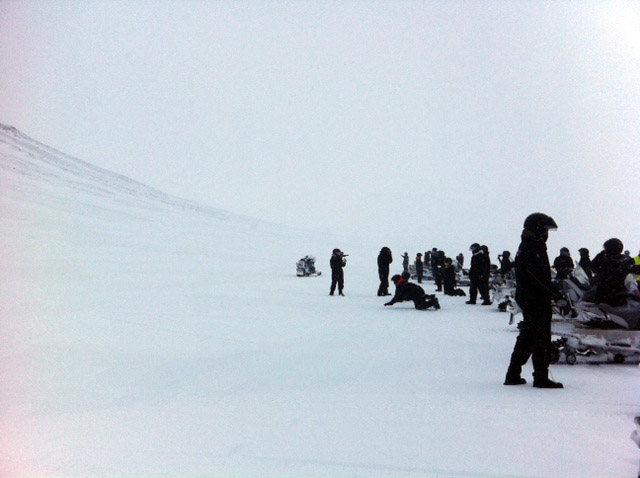 Five minute break to play in the snow

It was almost infuriating to think about how beautiful the landscape must be around me on a clear day. But then again, snowmobiling through a blizzard is probably something to remember too, right? The coolest thing that I wish I could’ve gotten a picture of was the bright blue glacial ice beneath the snow once the weather cleared up a bit, which was a very refreshing yet surreal color among such a stark white setting.

Searching for those landscape shots didn’t quite turn out as I’d hoped in Iceland, but I guess that just means I’ll have to go back in the summer when there are 24 hours of daylight and I can explore as much as humanly possible. Who’s with me?

I'm officially one week into my three months here in London and already I feel like I've been here for...
Continue Reading