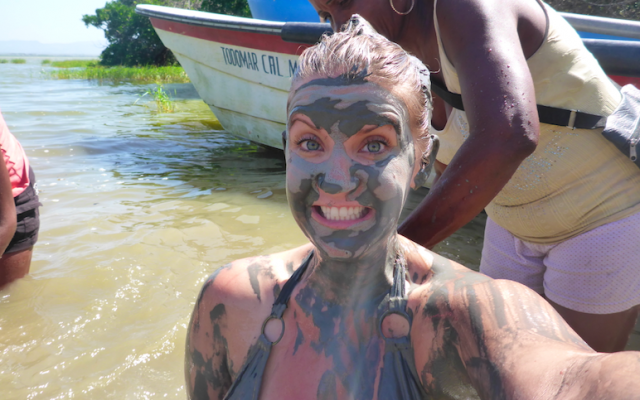 So there’s this popular day trip from Cartagena to a place called Volcan el Totumo. It’s a so-called mud volcano, and the whole experience goes a little something like this: strip down to your bikini, climb a steep wooden staircase, descend into a thick, muddy pool of strangers, and get passed around by a bunch of Colombians while a whole slew of tourists watch. Then you walk down the death stairs covered in slippery mud, and join said strangers in a lagoon where you’ll get even more naked and let some women rinse (aka nearly drown) you with buckets of water.

And yes, this is the most action I’ve gotten in South America. But anyways, I digress.

I first read about Volcan el Totumo in a book (What I Was Doing While You Were Breeding). Then a few travelers I met raved about how hilarious of an experience it was and insisted that I do it. Since I was still in those first days of a trip when money isn’t an issue, I was sold as soon as I heard the word volcano. So I spent about $35 USD to hitch a ride from Hostel Mamallena for a quick half day trip. Of course the 9:00 AM departure was more like 9:45 AM (because, Colombia), but after another hour or so on the road we pulled up to the giant ant hill. 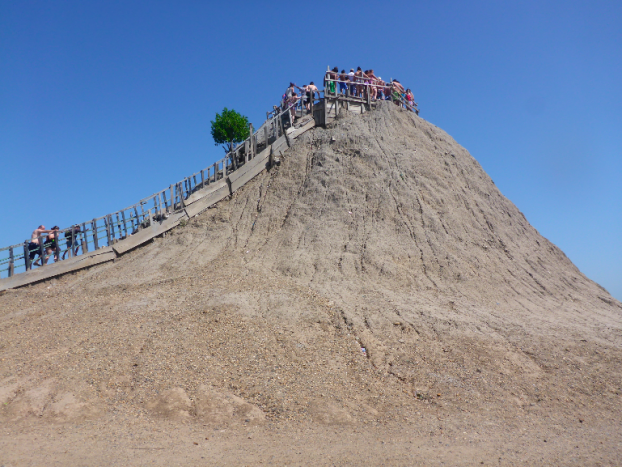 Maybe the word volcano doesn’t quite translate, but this thing looks like nothing more than a giant manmade pile of dirt. It juts out of nowhere, and it’s definitely everything you’d expect from a tourist trap. They claim that this measly 50-foot-high pile of dirt was once a legit volcano that used to erupt fire and lava, until one day a priest sprinkled holy water on it because he thought it was evil. Now it’s just full of non-evil mud.

Right. And I used to be a six-foot tall supermodel with a yoga body until some giant squished me back down to 5’2″. I’m calling bullshit on this one.

When we arrived our group was told to store all of our valuables together in a locker and leave our shoes and clothes out on the table. I threw my stuff in, took off everything but my bikini and my camera, and walked my way barefoot across the stones to the wooden staircase. I followed a line of other tourists up to the top where we waited at least 25 minutes in the sun, awkwardly watching people get rubbed down in the mud. 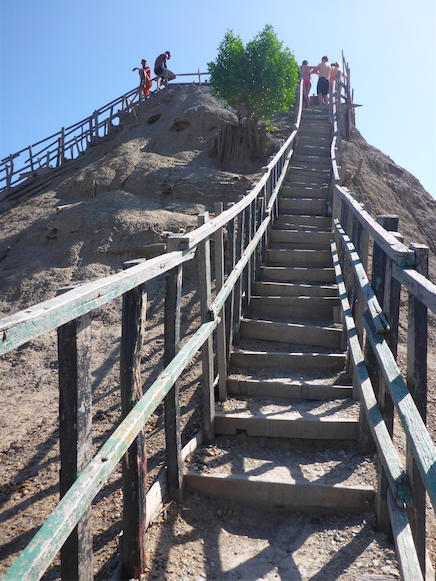 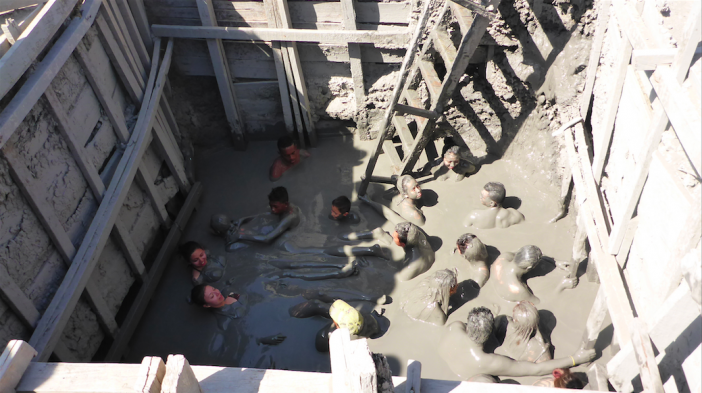 Finally when it was my turn I handed my camera over to a pre-pubescent boy who was also snapping pics with about four other cameras. I made my way down the mud-crusted ladder before the man at the bottom grabbed me and pulled me on my back. The mud was thick and gritty. There were bits of rocks, twigs, and who knows what else, but I was surprised how much I floated. I clenched my  abs and lifted my neck to keep my hair out of the mud. The Colombian man shouted at me in Spanish, but I couldn’t understand what he was saying. Then he lifted handfuls of mud and poured them on my chest, and made a notion for me to lay my head back. I finally relaxed and lowered my hair into the thick mess, and immediately it filled my ears. I raised my head slightly to the side, thinking it would drain out like water does, but no such luck. This stuff was thick and it cut off my hearing almost completely, and the guy seemed annoyed that I was moving so much. So I just lay there partially deaf while this man ran his hands all over my body and people crashed into my feet. 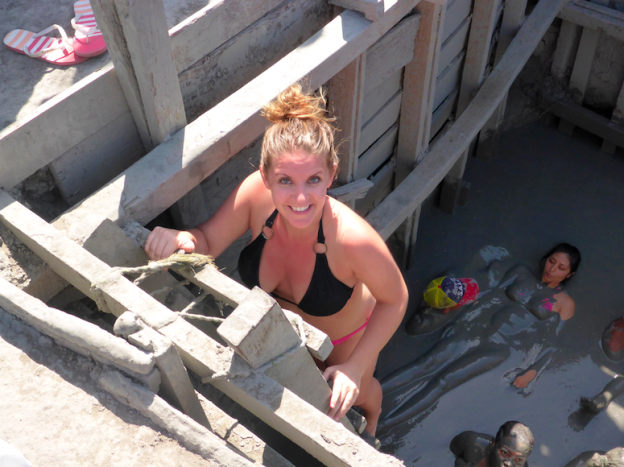 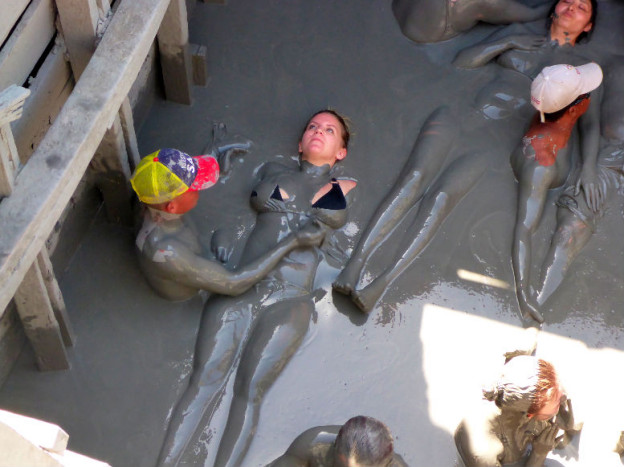 Okay… this is weird… 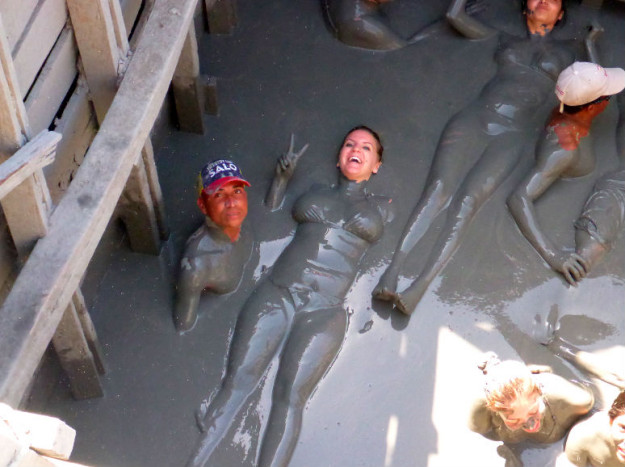 Oh he’s taking a picture, do something cool!

After a minute or two he passed me along to the next woman in line. I wouldn’t say it’s as much of a massage as it is just some people rubbing their hands all over your body. There were way too many people in the mud hole to be comfortable or even the tiniest bit relaxed, and I kept bashing my head into the side while nearly scraping my nose on a beam that stuck out a good few inches from the side.

Once the woman was finished with me she passed me on to another pre-teen boy who told me to flip over. I felt like I had entered the Superman pose, P90X style, while trying to keep my face above the mud. He rubbed my belly, which was super awkward as I totally gave up on sucking in.

When I was finished with my rubdown I decided to float around to try and understand why on earth so many people recommended this. And to at least feel like I got my money’s worth. I smeared the mud all over my face in hopes that I’d emerge with younger, healthier skin, or whatever sort of benefit this thing was supposed to have. But it was so crowded I just kept running into random people, our nearly naked bodies knocking against one another as I grabbed for something non-sexual to hold onto. 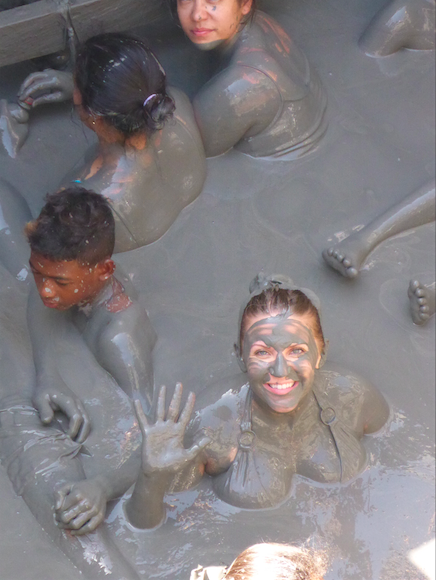 After a few minutes I’d had enough. I climbed the rungs of the slippery ladder, and the mud weighed down my already-loose bottoms as I struggled to hold them up and maintain my balance. Paying no mind to my disappearing bottoms, another Colombian man wiped the mud off of me. I climbed the rest of the way feeling like I’d dropped a huge load in my bottoms and they were sagging off of me.

The first few steep, wooden steps down were terrifying. I thought for sure I was going to unintentionally slide my way down, breaking an ankle or two along the way. After arriving safely at the bottom I followed the herd to this small lagoon to be rinsed off. Before I was even in the water two women came over to me with buckets and started cleaning me like an infant. The expectation here is that you’ll tip them with a few thousand pesos once you’re sparkling clean from river water.

One woman took my hair out of the ponytail holder and dumped buckets of water over my head in what seemed like slow motion. After my upper half was clean, she then said “bottoms” in a thick accent, which I assumed meant to take off my bottoms. So in waist high water, I kneeled down and pulled my bottoms off. I felt strangely liberated, and the murky water made it so no one could see my girly bits, but I also wondered what was lurking next to my exposed womanhood.

I think it’d probably be a lot more fun if you’re with a group of friends, and probably even better if you drive yourselves there and arrive early ahead of the crowds. But when you go solo, it’s just borderline creepy because you have no one to laugh with. I really don’t think you’re missing out though if you skip this, as you can definitely recreate the situation in your own back yard, and probably pull in a profit if you throw in some wrestling.

A New Year, A New Life

South America, I've arrived via Colombia! After what felt like a decade of packing and planning, I finally finished most of...
Continue Reading

Ten Days in the Amazon on a Budget: Part 2

Three nights of sleeping in a hammock strung up alongside about 100 strangers. Six consecutive carb-heavy meals of rice, noodles,...
Continue Reading