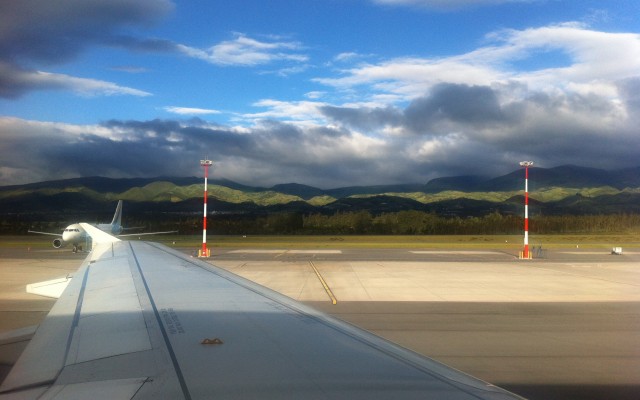 I’ve been in Ohio for eight days. Most of the time I’ve been sitting on the couch in my pajamas watching TV and playing with the dogs, but today I finally made a move towards my “what’s next.”

After months and months of figuring out destinations, routes, and budgets, today I purchased a one-way ticket to Cartagena, Colombia. I’ll be welcoming 2015 by devouring empanadas and salsa dancing my way through the walled city. Then a few days later I’ll hop on a bus and head off to another part of Colombia for a few nights before packing up and moving on to another spot. For at least a few months.

As of December 30th I’ll be backpacking my way around South America indefinitely (basically until I run out of money, get sick of roughing it, or complete my grand tour, whichever comes first). I’m going to leave most of the trip unplanned and completely open to spontaneity, but I’ll be following a rough path:

through Colombia, eventually making my way down to Brazil in time for Carnaval, then down through Argentina where I’m hoping to spend a few weeks in/around Buenos Aires before reaching Patagonia, then up through Chile and Bolivia before making it to Machu Picchu, and finally finishing up in Ecuador.

Aside from living in a cozy flat in London for three months, the longest trip I’ve ever taken has only been about two weeks, so this is a completely new experience for me. But since I wasn’t quite ready to make the commitment of moving to the West Coast just yet (mostly the whole getting a car thing), I figured it’s time to go live the life that my inner wannabe Latina has always wanted to live. Plus I’ve felt so liberated since selling nearly everything I own a few weeks ago, I kind of can’t wait to live with nothing more than what I can carry on my back for a while.

During this trip I’m going to focus more on my travel writing, perhaps even writing a book—but more on that in the next month or so. In the meantime, any suggestions on where to stay, what to eat, who to meet, or what to see while I’m down there, leave in the comments!