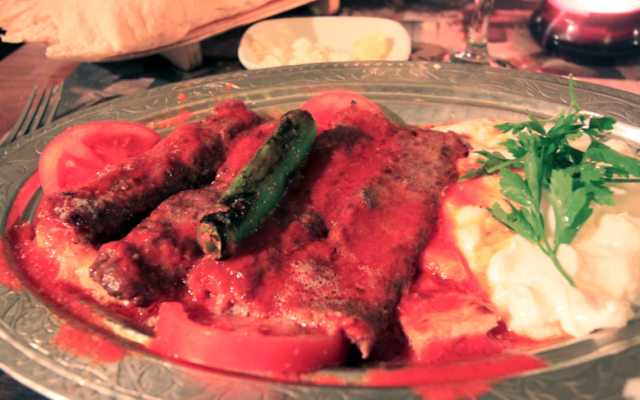 The short answer? Everything.

The downside to taking a last-minute weekend trip once I’d already splurged on a huge twelve-day trip in the same month, was that unfortunately I couldn’t afford to eat everything. Nor did I have the time. And since my hotel offered free breakfast and afternoon snacks, I didn’t wander far from the Sultanahmet area during dinner time. While there were no McDonald’s or TGIFridays, I was told that area is nothing more than a tourist trap with overpriced and under-flavored food.

All I can say is that if that’s true, then my taste buds must be seriously jacked because I developed a borderline addiction to every single thing I put into my mouth.

Sultanahmet was full of pushy hosts standing in front of every restaurant, fighting for the attention to lure in every passerby. It’s actually incredibly annoying. It took me about 30 minutes, but I finally decided on a restaurant called Masal because the guy at the door didn’t seem like a truck-stop rapist or a desperate prom date. Reverse psychology I suppose.

Thus began my extraordinary culinary tour of Istanbul. And while I’m not exactly a foodie, I do have over 28 years of experience in eating so that gives me some sort of credibility, right?

Here are seven budget-friendly foods or drinks that are definitely worth trying in Istanbul. 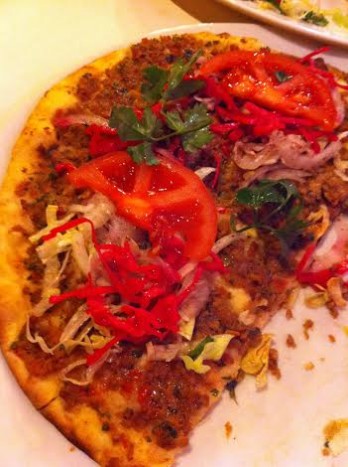 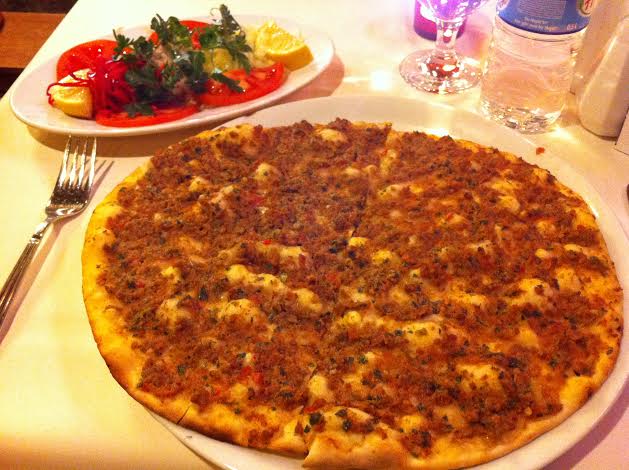 The first dish I tried was lahmacun, a simple pizza-like flatbread that I could’ve sworn I’d remembered Anthony Bourdain refer to as mandatory drunk food. Even though I wasn’t drunk, I knew my Taco Bell loving tummy (having been trained by years of eating—and enjoying—borderline offensive food) would love it.

The large piece of dough is topped with minced meat (beef and lamb), minced vegetables, and herbs, and then baked. It was delivered to my table with a side of lemons and a plate of vegetables including cabbage, pickles, tomatoes, onions, lettuce, and parsley. I think you’re supposed to pile on the salad, squeeze on the lemon juice, roll it up and eat it, but I chose to do it in smaller pieces because 1) it would’ve been huge, and 2) I hate the whole “now that I’ve rolled it I can’t set it down” thing. Either way, that stuff was fantastic and not nearly as filling as I thought it’d be. I could’ve easily eaten two more. And it was nowhere near as greasy or degrading as drunk food in the US.

But whatever you do, DO NOT skimp on the lemon juice. It’s key. 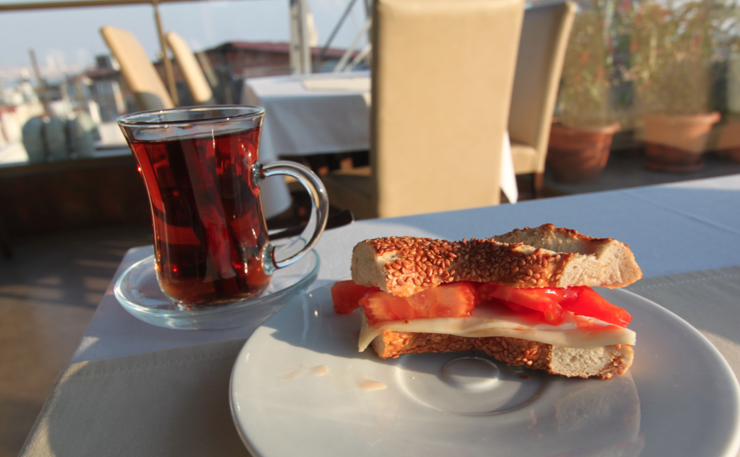 Alright, alright. I’ve lived in New York for nearly eight years, so I’ve been pretty spoiled by the very definition of a bagel. I was skeptical when my new hotel friends invited me for Turkish bagels and tea. A simit is essentially a sesame seed hybrid between a bagel and a pretzel that’s crispy and crusty on the outside, but fluffy on the inside. Splice it open and layer it with some tomatoes and cheese, and serve with a side of hot tea with a view of the Blue Mosque, and you’ve got yourself the perfect afternoon snack. 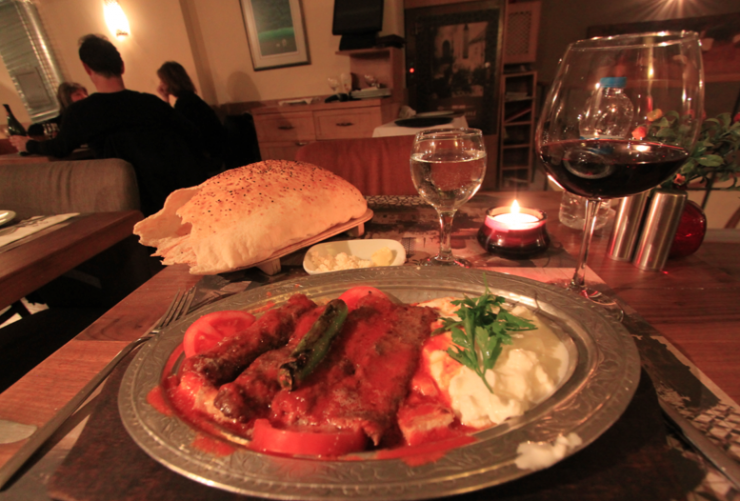 One night I decided to treat myself to a nice meal (and a lot of red wine), so I popped into Sura Kebab House and ordered my very first İskender kebap. Holy satisfying dinner. I never knew meat and yogurt could go together so well.

They served me a gigantic loaf of this balloon bread, which was easily the size of a brown paper shopping bag, along with a small dish of what I’m pretty sure was salted butter and a soft cheese—maybe goat cheese? I don’t know if I was supposed to mix the two together and spread on the bread, but I did and the results were absolutely phenomenal. Groups of tourists glanced at me while I devoured the bread and gulped down my Pinot Noir. Then the kebab came out, drenched in a tomato-based sauce and served next to a bed of yogurt.

As the weird girl who won’t hesitate to dine solo, I made friends with the entire waitstaff that night and got free shots of Raki when I was finished. Though it is the national drink of Turkey, Raki was nothing special in my opinion and very similar to ouzo or sambuca. Barf, pass. 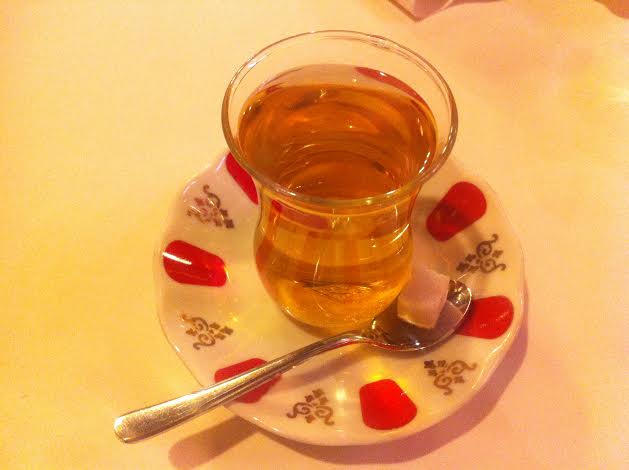 Okay this isn’t really fair because I LOVE TEA. Black, green, herbal, chai, morning, noon, and night, you name it. All kinds of tea, doesn’t matter, I will drink every last sip. So when the waiter handed me this perfect, and better yet free glass of apple tea, I didn’t think it was possible to have a better meal ending . That is, until I walked down the street and picked up some… 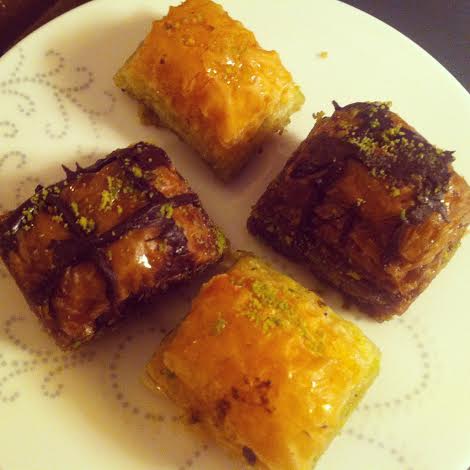 One cannot go to Turkey without indulging on the delicious sweets that have become so popular here in the Western world. While they say baklava’s origins aren’t particularly well documented, some suggest that the modern day form was created right inside Topkapi Palace in Istanbul.

Wherever the hell it’s from, baklava is abundant in Istanbul. I stopped by several shops and easily consumed 1500 calories in sweet, sticky deliciousness before returning to my hotel every single night. 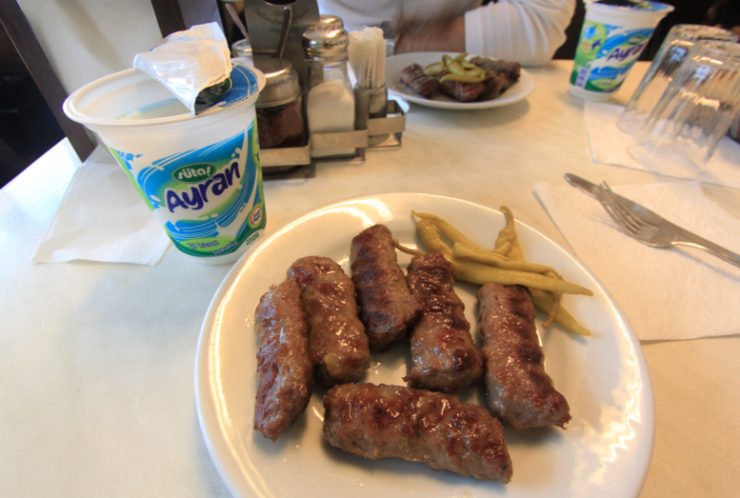 Okay so this is the name of a restaurant, but they only serve a couple of things on the menu—the main item being köfte, or Turkish meatballs. The place itself is definitely a no-frills restaurant, but their meatballs are supposedly some of the best in the area. One of my new friends I’d partied with in Taksim took me here for lunch, claiming it to be a favorite amongst the locals. Unfortunately after our super late night out, I was still a wee bit too hungover to handle much solid food. The meat was definitely delicious and juicy, but I could only eat about three and a half before retreating back to my hotel room to crawl under the sheets and swear off drinking (again).

I also washed my meal down with an Ayran, which is a cold yogurt drink mixed with salt, and a national non-alcoholic drink in Turkey. Everyone in the place was sucking these down, and again the whole meat + yogurt thing is genius. 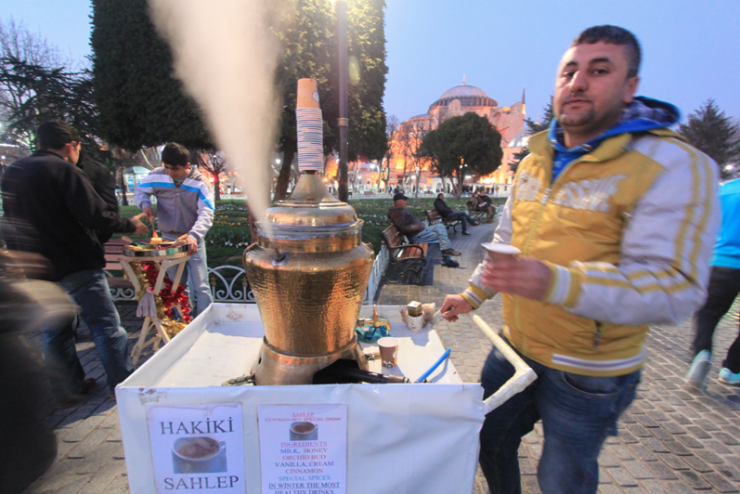 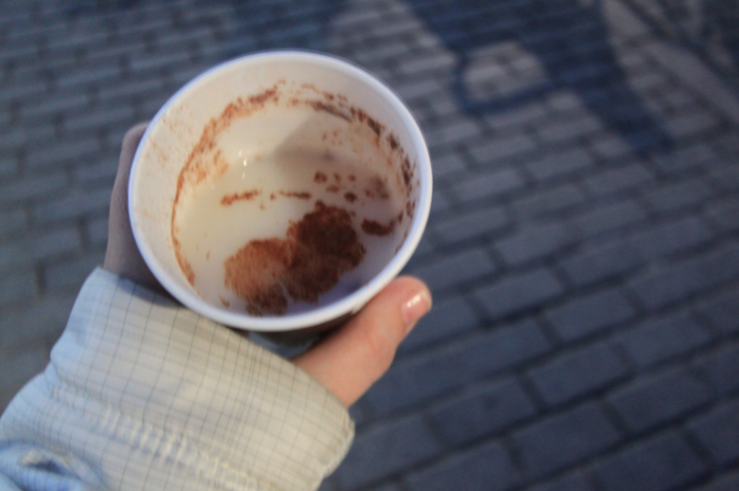 The evenings were still chilly, so I bought a cup of sahlep to keep warm, thinking it’d be like a spicy hot chocolate. Not exactly. Salep is a flour made from some kind of orchid, but it’s commonly used in a hot wintertime drink. This drink in particular was made with milk, honey, orchid bud, vanilla, cream, cinnamon, and spices. It had a much thicker consistency than hot chocolate, almost like a glue that was so thick the piles of cinnamon clumped together on top because it was too thick to permeate. Regardless, I drank the entire cup before it got cold, and once I got past the weird texture I loved every second of it.

Turkish food has quickly moved to the top of my favorite cuisines. Istanbul is the kind of place where you will not go hungry. I only [accidentally] ended up eating chicken orzo at one super touristy place. The rest of the time I was sampling bits and pieces of Turkish and Ottoman cuisine whenever and wherever possible. But I still barely scratched the surface in trying all of the foods on my must-eat list. Next winter when flights are back down below $500RT I’ll almost certainly head back over there and explore the lesser touristy neighborhoods for a few dinners. Totally worth it.

Have you ever been to Turkey? What’s your favorite Turkish food?

An Ode to Chi Cheng, and Seeing the Deftones in London

This past weekend the rock world lost an incredible musician, bass player Chi Cheng from the Deftones. When I woke...
Continue Reading

I always told myself that as soon as I got my first big girl job, I was buying a plane...
Continue Reading