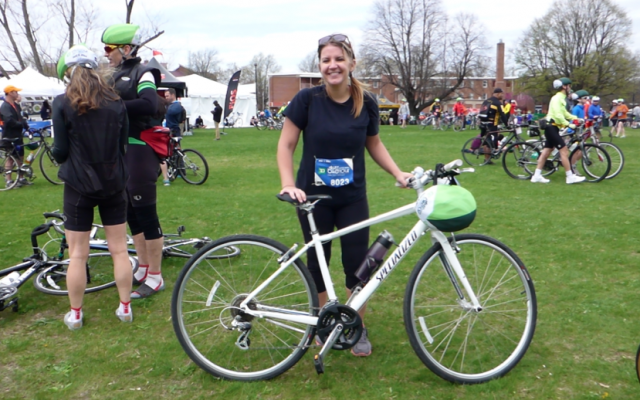 This afternoon I completed the Five Boro Bike Tour in NYC. This evening my Jell-o-like limbs are confined to the couch.

The Five Boro Bike Tour is an annual cycling tour of NYC, and it’s the largest recreational cycling event in the US. This year there were 32,000 riders, as they closed off a bike-only route through Manhattan, The Bronx, Queens, Brooklyn, and finally Staten Island, while crossing over five bridges.

I woke up this morning at 545AM and seriously considered staying in bed. After a hot shower to wake me up I layered on my giant diaper (aka biking shorts) and workout clothes. I was still full from last night’s Chipotle burrito, but I forced myself to fuel up with a peanut buttered bagel, a banana, string cheese, and a Sambazon Mocha Java drink. I was ready to do this.

We made our way up a car-free Sixth Avenue easily. Along the way there were live bands on the sidewalks, and small groups of people either cheering us on or pissed that they couldn’t cross the street. The air was brisk and the sun nonexistent behind thick grey clouds. I didn’t mind the goosebumps on my arms as I passed the first two ad agencies I worked at, the NHL store where I used to work in college, and Radio City where I walked at my graduation. It was kind of like a greatest hits tour for me. Plus it was nice riding on the city streets without the constant horn-honking traffic.

We entered Central Park at 59th Street and got our first taste of uphill riding. It didn’t take very long before we were on 110th moving into Harlem. It was still smooth, effortless sailing and we trekked across our first bridge, the Madison Avenue Bridge. From there the ride only went about two miles in the Bronx before we were crossing back over into Manhattan and onto the FDR, a road I’d so often feared for my life in the back of many, many cars, yet I was now biking in the center lane with no worries at all. The dark tunnel under Gracie Mansion echoed with loud cheers as we entered, and when we finally emerged back into the daylight the daunting Queensboro Bridge (sorry, I refuse to call it the 59th Street Bridge) began to peek out.

I was a little intimidated on the ramp, but I switched gears, stopped talking, and started pedaling. Before I knew it I was past the ramp and only a little sweaty. A few people got off and walked their bikes, but the rest of us pushed on and right over. Just like that, we were in our third borough, Queens. 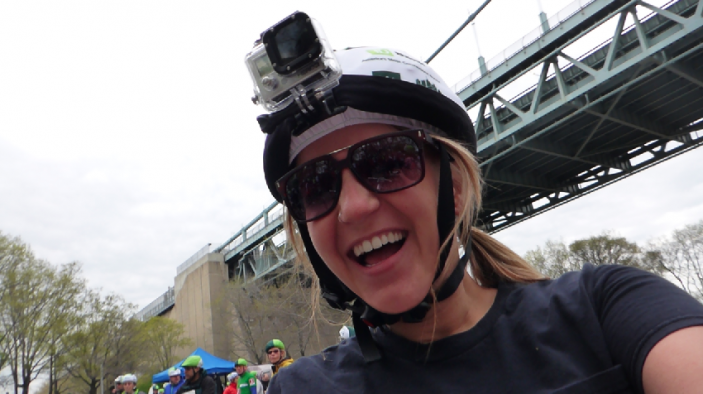 Clowning around at the first rest stop in Astoria Park

The first rest stop was at around mile 19 in Astoria Park and was basically mandatory, so we dismounted and grabbed a quick snack. By now the wind was really whipping, and I longed for a long-sleeved shirt. We all agreed we were warmer while cycling so we jumped back on and kept going. I had been 100% unfazed by the ride until the moment I got back on my bike and realized my thighs were definitely getting weaker.

After Queens we found ourselves riding through Greenpoint, Brooklyn and eventually Williamsburg along Kent Avenue. This is where the wind really began to pick up, so much that it was bringing my bike to a complete halt as I continued pedaling. This is also where I fell in love with DUMBO and for the first time ever imagined myself living in Brooklyn. I know, I even shocked myself.

Somewhere along the way right before we stopped so I could take a quick pee (which as it turns out I didn’t really have to take, my girly bits were just being fooled by the bike seat) Suzannah thought she’d channel her inner biker and throw some hand signals so those behind her knew to stop—and she wiped out. I felt bad that we didn’t even noticed and continued pedaling on without her, but she gracefully rejoined us with hardly a scratch. 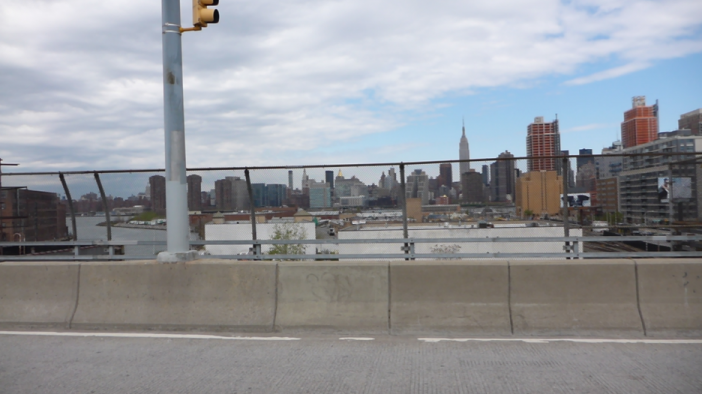 ESB from the BQE

We were about halfway through Brooklyn when I took on the daunting task of simple math, calculating how many more miles until the finish line. The wind was really difficult to pedal against, I was freezing cold, and my lungs hurt from breathing in the cold air. But we kept going, and going, and going, right onto the BQE Expressway. A man at the entrance ramp cheered us on, shouting only “nine more miles to go!” That would’ve been great had most of those nine miles not felt like an onramp.

After I was thoroughly exhausted, tinkering along slowly against the wind, three of us girls who had managed to stick together came to a common realization at the same time. We were all in agreement that we’d be walking over the Verrazano Bridge together. 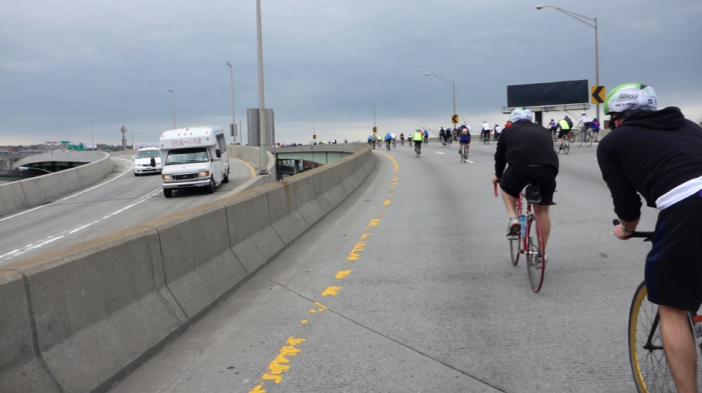 Riding on the BQE 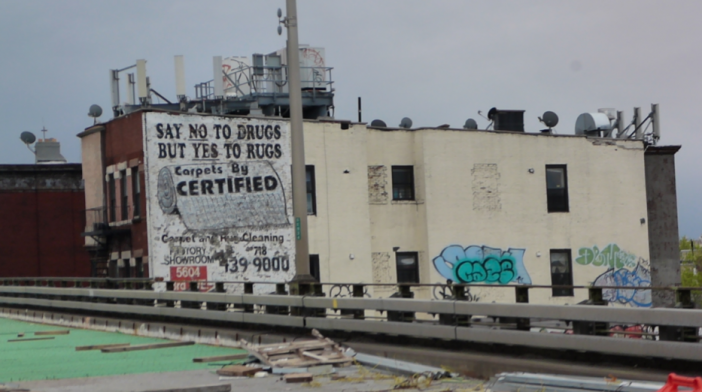 I can’t even believe this ad. In what world would a person who’s doing or considering doing drugs turn to rugs instead? 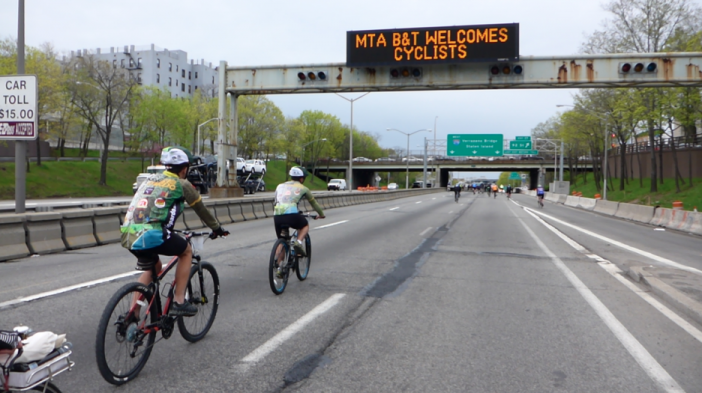 Before we got to the Verrazano Bridge there was a tempting drop out point in which a good amount of people were actually taking to be driven over. But we continued onward.

The Verrazano is the massive bridge connecting Brooklyn and Staten Island. Its central span is 4,260 feet long, which is 60 feet longer than the Golden Gate Bridge, giving it the longest bridge span in the Americas. It also has no bike paths, so the only time you can ride across it on a bike is during the Five Boro Bike Tour each year. 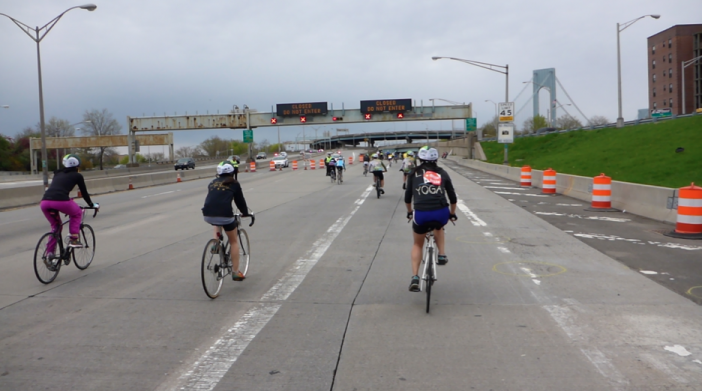 So close, yet still so far away

I chugged some water, took some deep breaths, gave myself a little pep talk in my head, and started pushing harder. Now that I was there, I didn’t want to stop and walk. I wanted to power through. As I pedaled my way slowly up the on ramp I looked to see just how far until the middle point where we would begin to descend. It didn’t  seem THAT far. I kept going. 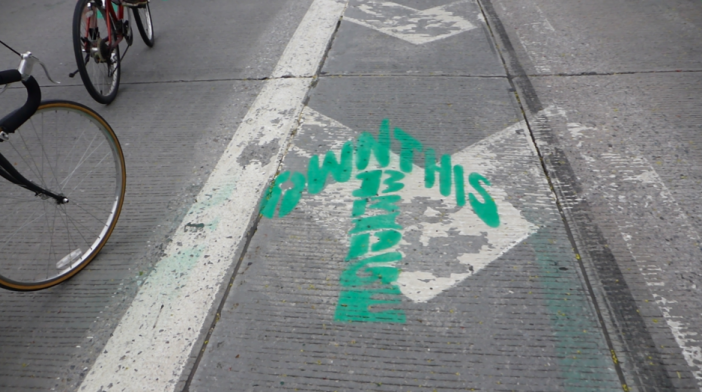 I sure as hell did own this bridge! 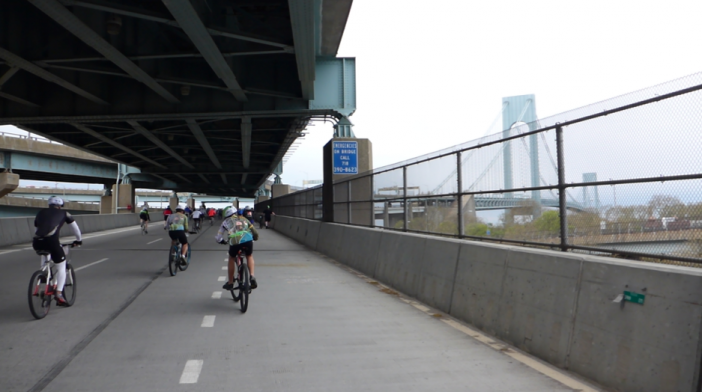 It doesn’t look THAT bad…

One by one people started to jump off their bikes and walk. I kept going. The wind picked up and the impossible climb got even more difficult. By now I’d lost everyone in my group once I watched the last girl dismount her bike.

There were all kinds of motivational quotes on the ground in bright paint, people on loudspeakers giving words of encouragement along the sidelines, and I could hear music up ahead. The higher I got, the more the wind picked up and the more I swerved. I could feel my bike moving perpendicular to the direction I was riding with each gust of wind, skidding me a few inches to the left each time it blew. The incline seemed endless and felt even worse than it looked. I got close enough to hear the song playing at the finish line, Empire State of Mind, and my mind started to reminisce about how far I’ve come living in New York for the past (almost) eight years. (Yes I’m a nerd.)

It only took a few verses and I passed the rather lackluster finish line.

Finally, I’d made it! I was done! Time to throw my bike and my body onto the grass and relax! 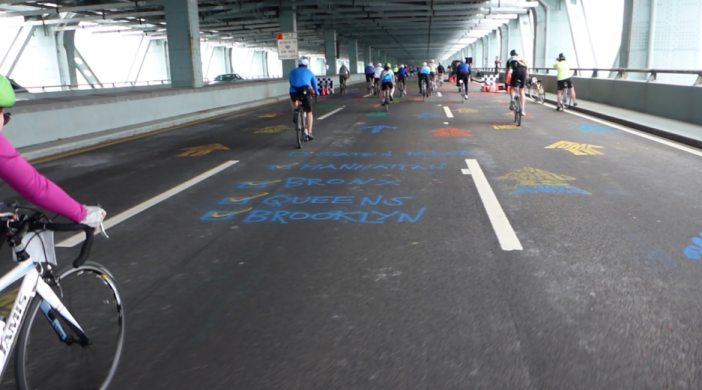 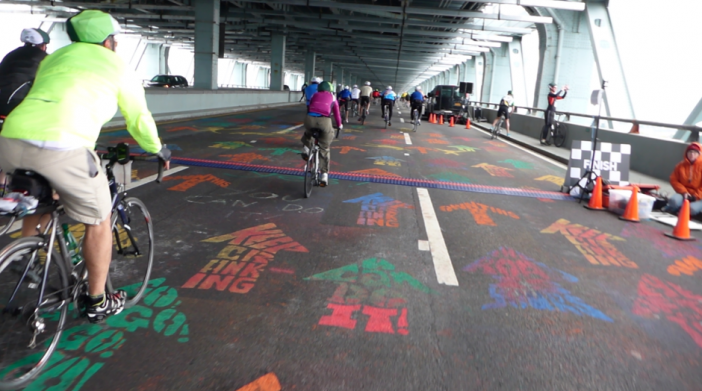 I don’t really understand how they determined where to place the finish line, but it was deceiving. I figured it was all downhill from there, but the wind was so strong we were still pedaling at a snail’s pace for another 5-10 minutes or so before reaching the bottom of the bridge. 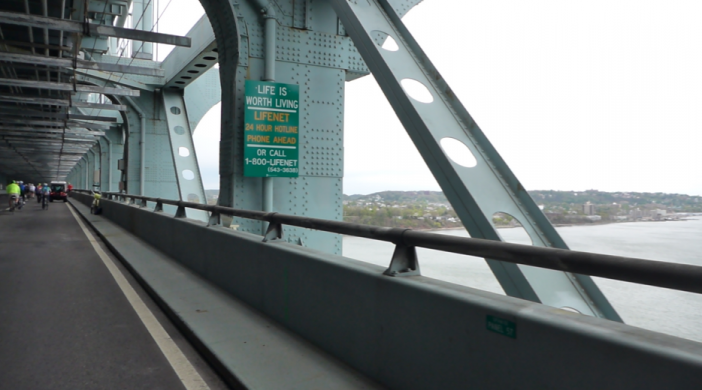 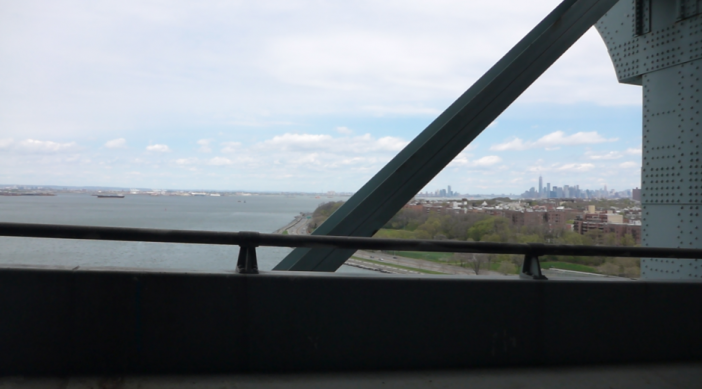 View of Manhattan from the Verrazano Bridge

We made it to the park at the end where they were holding a festival full of free cheese and chocolate milk, fun music, and pricey food. We only sat down for like two minutes before realizing it was freezing ass cold, and we’d be much happier to just get on the ferry and back to the city ahead of the crowds (since we were still at the front-ish of the pack). 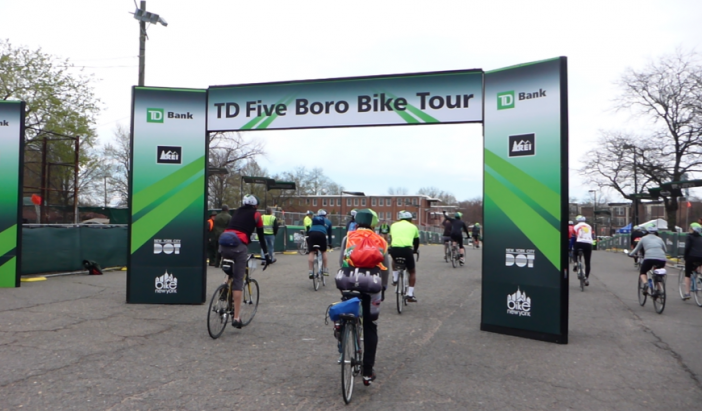 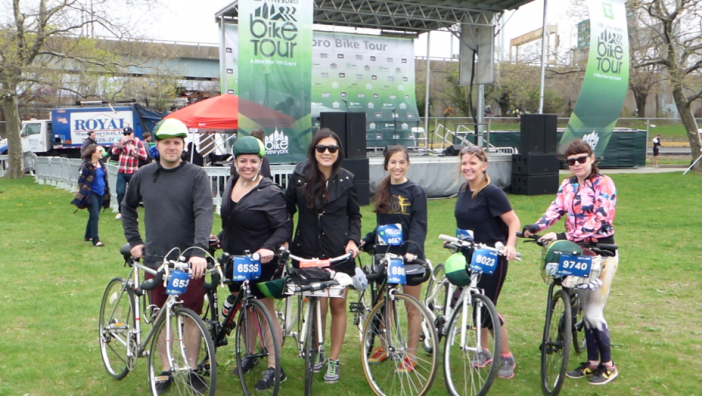 The whole group reunited at the end 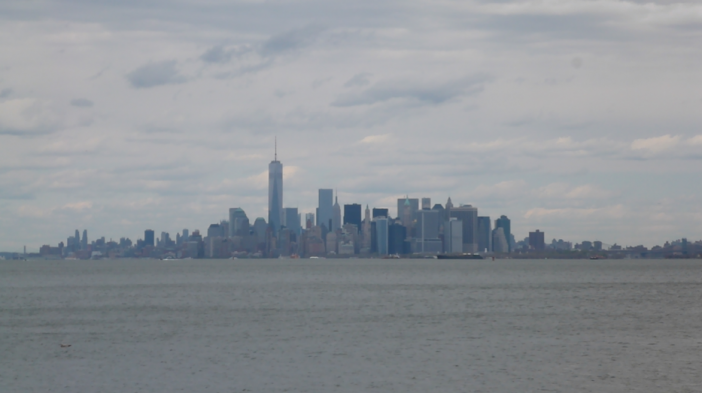 Well after the finish line and the festival we had to get back on our bikes and ride about another 3 miles to the ferry, complete with a few more hills. By now all of our butts, thighs, wrists, hands, and backs were telling us to take a break.

Luckily they moved us swiftly right onto a ferry and immediately to Manhattan where we arrived near my old apartment on Wall Street. I led the group back to our office to drop off our bikes on my old bicycle route underneath the FDR, when suddenly I felt my back wheel completely drop out. It only took 40+ miles, but I got a flat tire and was riding on the rim. Ironically we were about 25 steps from a bike rental shop, so they let me use their pump after our group’s handheld one failed. Thankfully my tire held the air so I could finish the ride.

Yes! It’s so awesome to see the city from a bike in so many areas where they’re usually prohibited! And no, you don’t have to be overly active or in awesome shape to complete it, but it couldn’t hurt. It really wasn’t as brutal as I thought it was going to be, and though I struggled a bit for the last 10 miles or so, I didn’t have to quit.

Just make sure to ride a good bike, wear padded biking shorts, and perhaps most importantly START EARLY. If you’re in the front of the group you’re much, much more likely to have a better time. We only experienced congestion once while merging in Central Park and once at the mandatory rest stop, but the rest of the ride we were comfortably distanced from other riders. I’d heard about other groups being so backed up they had to get off and walk for like an hour. Also remember, it’s not a race so you can stop however often you need to refuel and hydrate along the way.

The ride takes place on the first Sunday in May every year, and tickets go on sale in January so be sure to keep an eye on the site well in advance as they do tend to sell out. I paid $90 for my general registration pass, but I think it was definitely worth it. The ride itself took about four hours for us to complete, including two stops (totaling about 30 minutes), but after the festival and ferry, it took about 5 1/2 hours total.

Oh, and it’s a killer workout.

Hiking Sierra Negra and Volcán Chico in the Galápagos

While in the Galápagos I felt the urge to climb to the highest peaks and peer down into the very...
Continue Reading