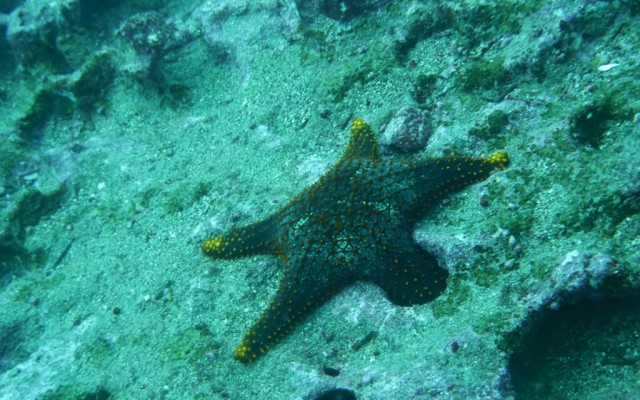 I was really looking forward to doing a redemption dive in the Galapagos Islands—just one kickass dive to erase all the bad memories from Florida. But after reading online that the dive sites are best for advanced divers and known for their strong currents, not their water clarity, I wasn’t sure how great it could actually be.

Whatever. I just wanted to dive without emptying my guts into the ocean.

I decided to go with Scuba Iguana based on their reputation (and a solid recommendation from a attractive Latin diver I’d met). They had one last spot on their dive scheduled for my last day on Santa Cruz, so I paid the $175, signed some paperwork freeing them from any responsibility should I die or get dismembered, got fitted with all of my gear, then went to dinner eagerly anticipating the next morning. My plan was to grab a quick bite then go back to the hotel to hydrate and brush up on my scuba skills before calling it an early night.

An hour later the whole tsunami thing happened and completely destroyed my plans.

I didn’t get back to my hotel until the wee hours of the morning so I started to think diving wouldn’t be the best idea, especially with my nerves still on edge. Plus two divers in the shelter told me that diving the next morning would be a bad idea because there would likely be even stronger currents and lower visibility.

I woke up a couple hours later and tried to call the shop to tell them I wasn’t feeling it that day, secretly hoping it was canceled. I assumed that they would understand since my PADI courses continuously harped on the need to be a responsible diver and not go diving when you’re quite feeling up for it so that you don’t endanger the rest of the group.

Long story short, I couldn’t get through to them until they called me over an hour and a half later, and despite Scuba Iguana’s stellar diving reputation, they didn’t give a fuck about my safety concerns and hesitations. They refused to reimburse me even though it would have been as simple as throwing out the carbon copy of my card they had yet to send off to the bank. So not only did I not go diving, I was out $175.

The next day I was feeling back to my normal self and I was pissed that I’d let fear get the best of me on my last day in Santa Cruz. So I decided to try, try again on Isabela Island. There was only one diving company there and they didn’t have a great reputation. But I had made up my mind, I was not leaving the Galapagos without going diving and $150 later I was signed up for attempt #2. 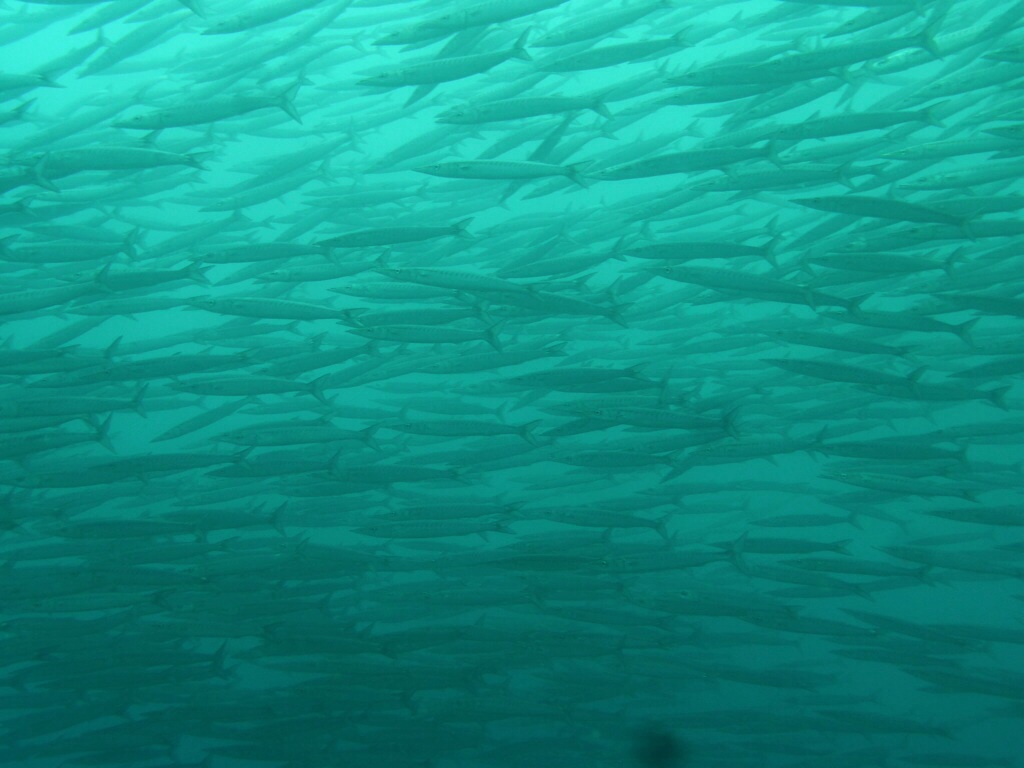 Diving day came and I did everything by the book. I took seasickness pills, ate breakfast, drank a ton of water. I was ready to go. As we sped out to Turtle Island I was actually really excited, and before I could think about it all of us were bobbing around in the choppy water. We didn’t even do any checks to make sure our gear was functioning properly, they just handled it themselves and hurried us into the water.

Just as quickly Harry and the other non-English speaking divemaster were ready to go under. I dumped all the air from my BCD and once my head was under I sank like an anchor. Due to our shitty preparation I think my weight belt was way too heavy because getting neutrally buoyant is actually one thing I’m pretty good at. This time I was all over the place trying not to touch the rock and coral below me. Luckily the sign of struggle is universal, so the divemaster tried to inflate and deflate my BCD with quick bursts, using up tons of oxygen before giving up and grabbing my hand to drag me along. We floated around holding hands for a few minutes before I realized this was the most romance I’ve had in a long time, and naturally after a few minutes I got weirded out and let go. 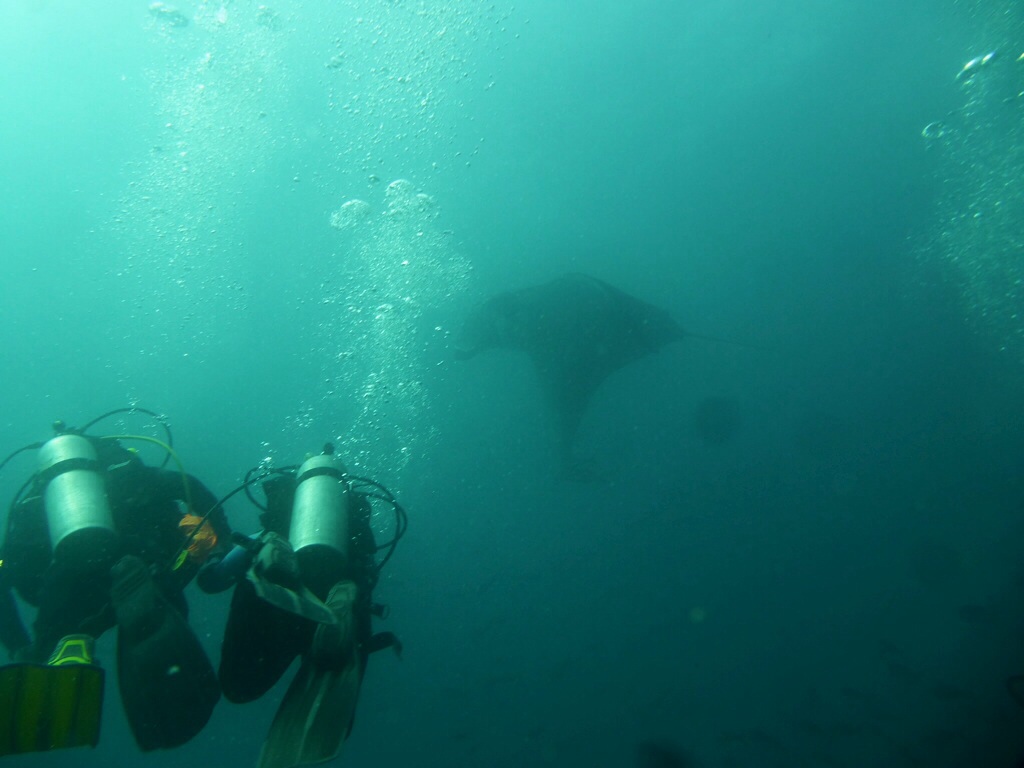 I was using up a ton of oxygen trying to fill my lungs with air as it was the only thing that seemed to keep me slightly above the ocean floor. But I felt great. The vomit-fest of the Florida Keys seemed so far away.

Suddenly everything got really dark like a storm cloud moving in. I looked up to see we were in the shadow of a massive manta ray gliding about ten feet above me. I’ve never seen anything so big, so close in the water. I was half wishing it would swoop down and wrap me up like a pig-in-a-blanket in its massive fins. 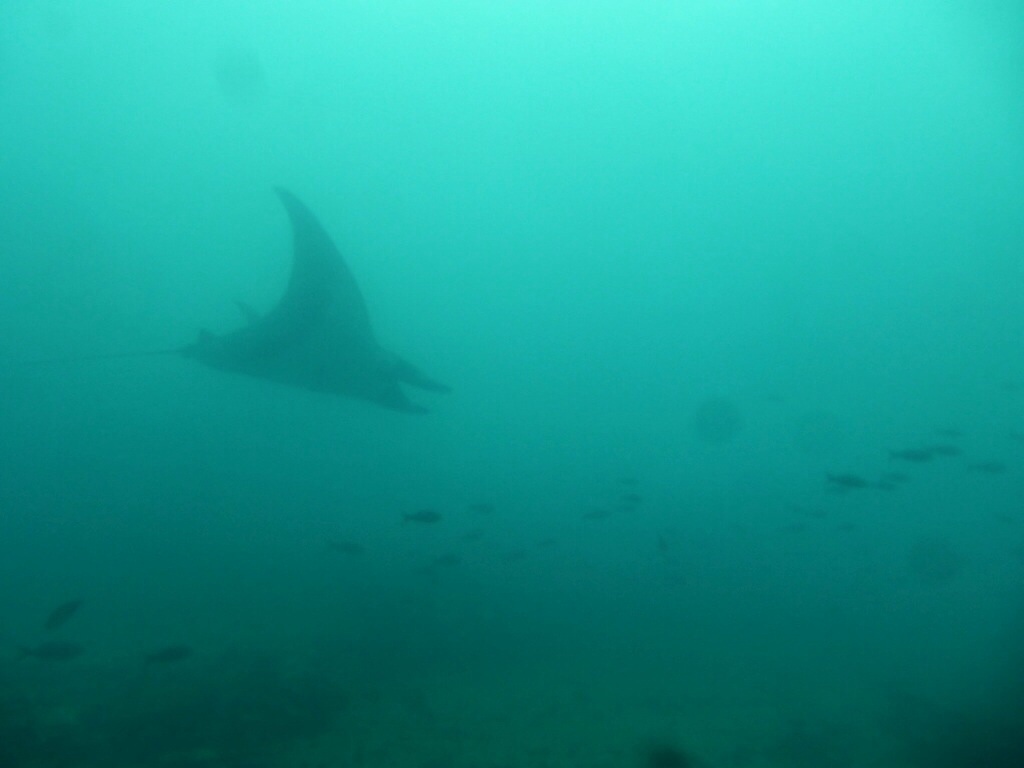 Then it happened, the highlight of my dive. The only thing I really wanted to see while I was underwater. About 15 feet away a hammerhead shark that was at least 9 feet long slowly swam past, not paying any attention to us with its goofy eyes. I’m not particularly scared of sharks, but I wasn’t sure how I’d react to seeing one 40 ft under water, though I definitely wanted to find out. Seconds later three more hammerheads appeared and swam by. Oddly enough it felt just like seeing them in an aquarium. I was simply observing the sharks as they paid no attention to us or anything that swam by. I didn’t feel nervous or scared at all, in fact I felt the urge to swim in front of them and see if they would even notice me head-on. 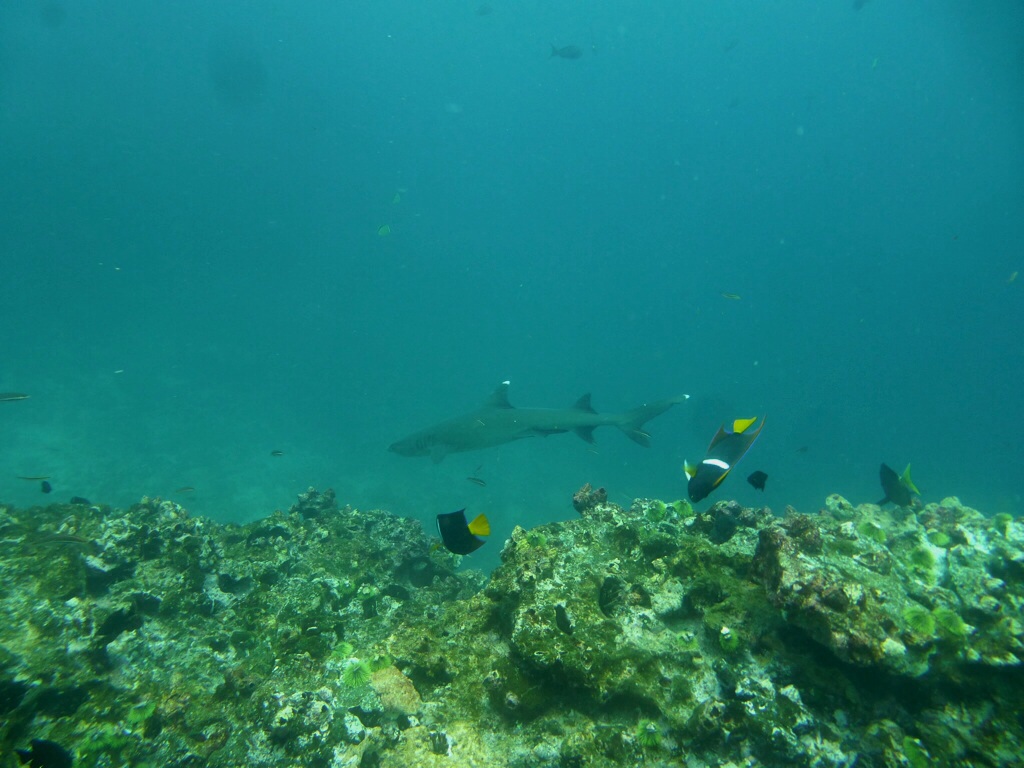 We swam along with tons of crazy-looking fish, reef sharks, starfish, and more unidentifiable creatures. There was something new to see at each turn, which was definitely the selling point to diving in the Galapagos. Far too quickly I realized I was already down to 700 PSI in my tank, which was when we were supposed to start heading up. Unfortunately I was the only one even remotely close to going up, so the divemaster motioned for me to head up alone. 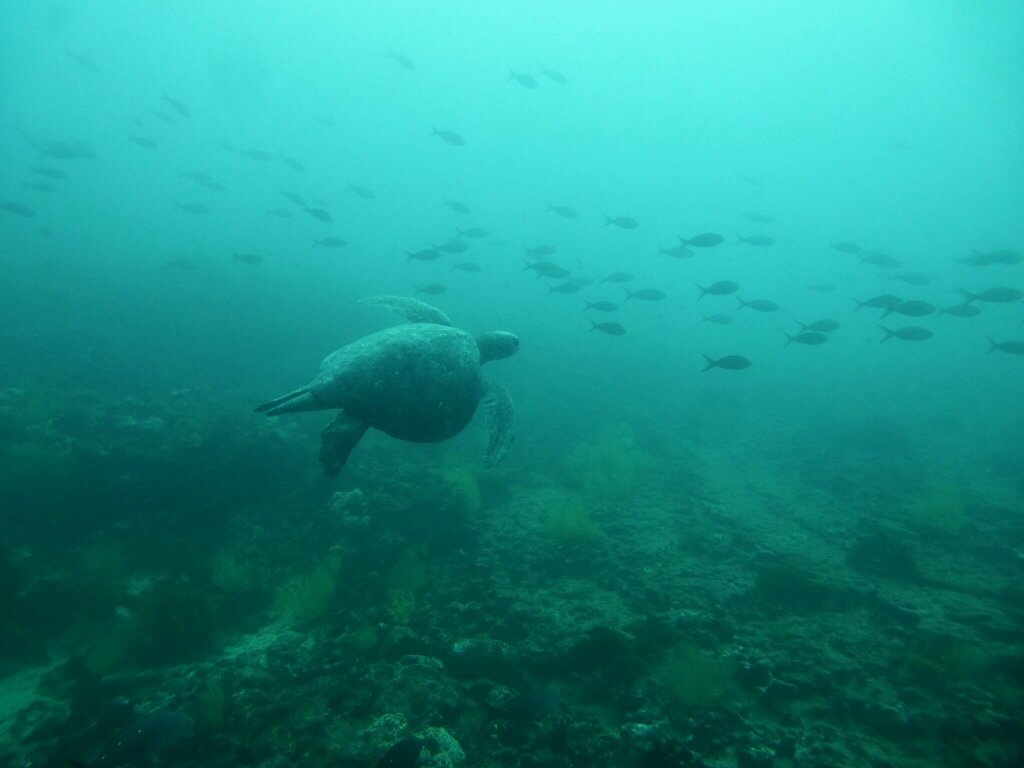 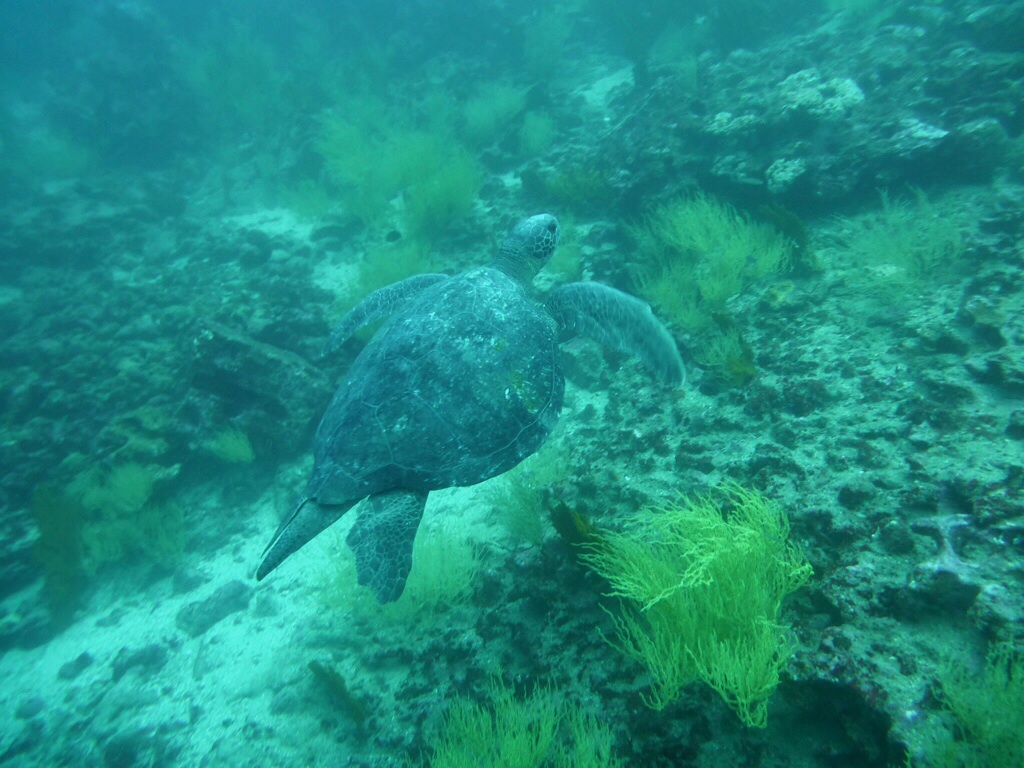 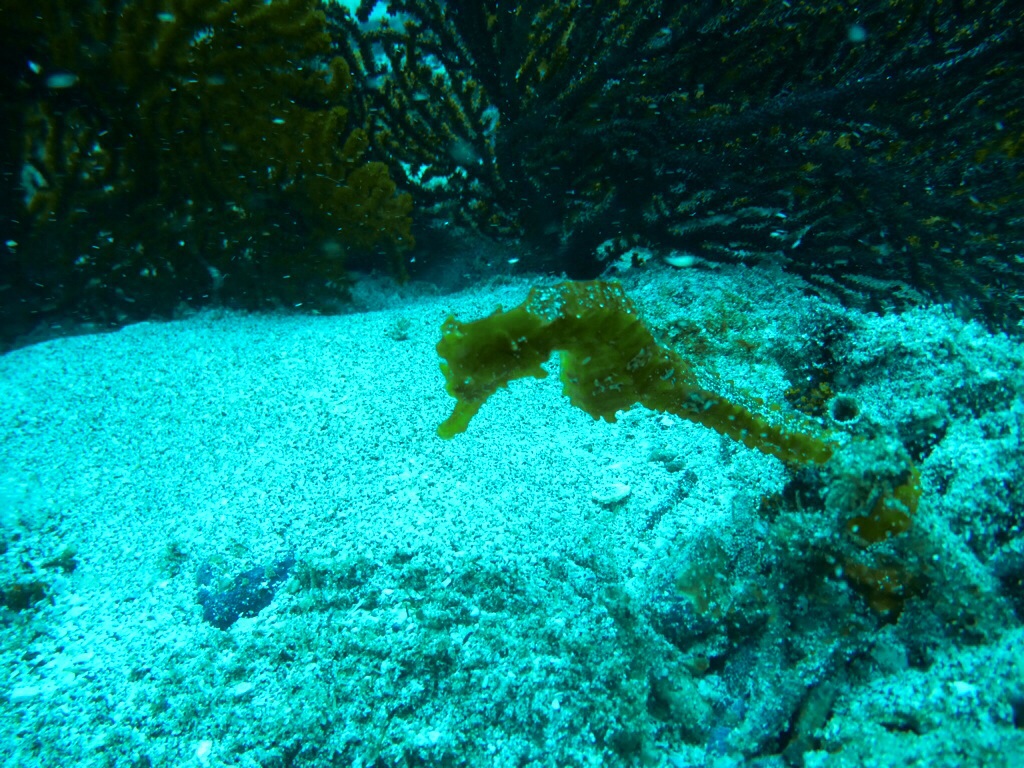 If you don’t know much about diving, basically you can’t just pop right up to the surface or you risk decompression sickness, and you can get the bends and/or die (hence the pre-dive paperwork). To stay on the safe side you should ascend slowly, then stop for about 3-5 minutes at around 3 meters/15 feet. Since my depth gauge seemed to be off and I was without a watch, I knew I’d have difficulty determining the right depth & duration for the safety stop. I kept trying to communicate with the divemaster that I didn’t want to go up alone, but it was pretty hard considering you can’t speak under water. And I didn’t want to ruin the dive for the rest of the group so I sucked it up and started up alone. 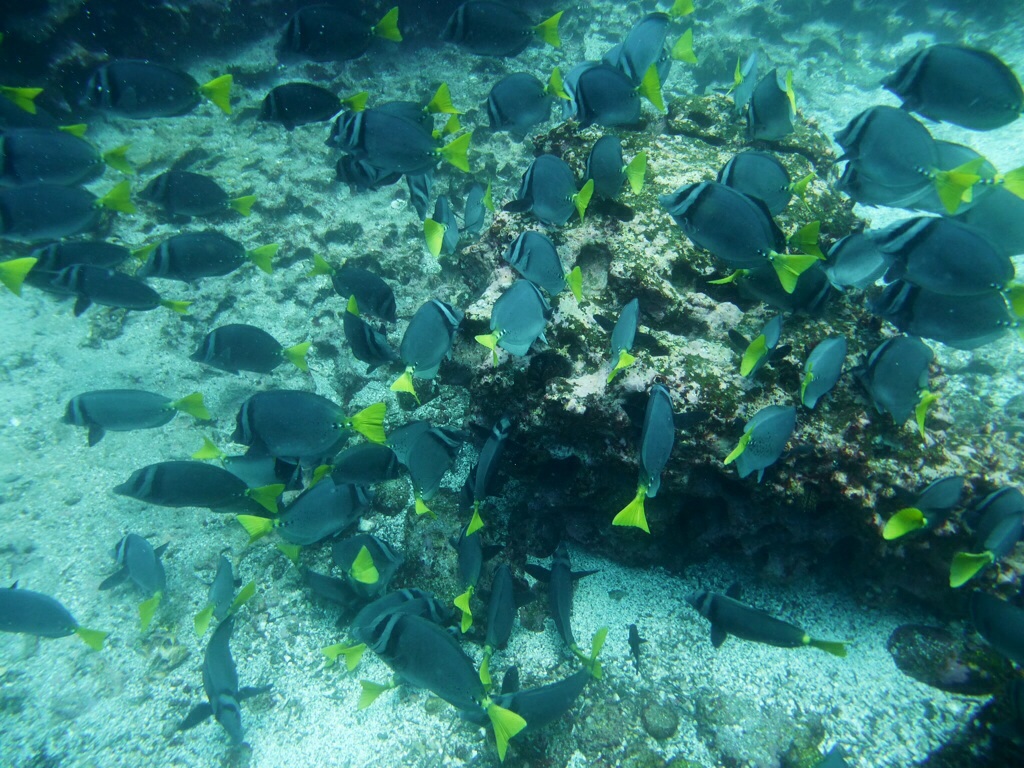 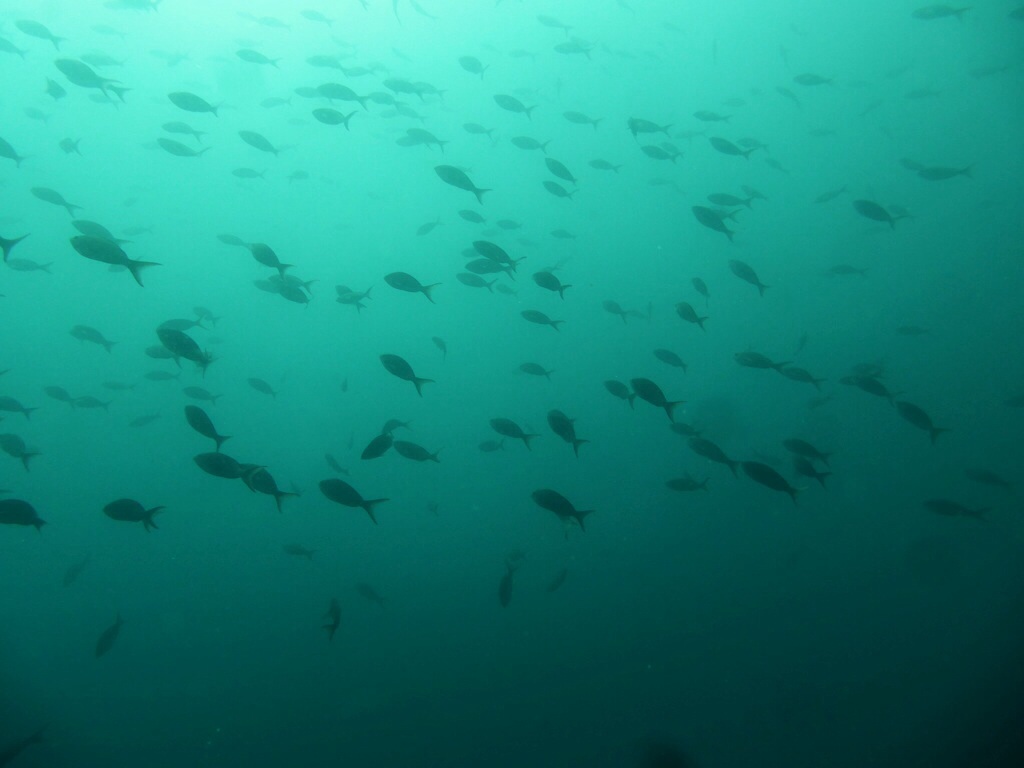 For the first couple seconds I started rising slowly and steadily below my air bubbles. Then out of nowhere I was being pulled up like I was being beamed up by aliens. I tried to slow down but my head was above water in a matter of seconds. Shit.

The surface was choppy, and I started to get dizzy as the boat came to get me. I swam my way against the current towards the boat, which seemed to take about a week and a half. By the time I got there I was exhausted, breathing heavily and my limbs worthless. The crew had me take off my BCD and hand it up to them which was incredibly hard to do. I felt like I was going to pass out. Then they had me take off my fins, but with such little strength left I was worried I wouldn’t be able to stay afloat without them so I latched onto the ladder like a Barrel of Monkeys game piece, my body bashing against it, bruising me with each wave.

I tried to climb the ladder which was even more difficult than all those times I failed trying to climb the knotted rope in gym class. I felt like I weighed 1800 pounds, but with the help of the crew I fell into the boat and made my way to a seat. My head was pounding and I felt dizzy. My stomach started to churn again, just like last time. Except this time I was worried I’d gotten the bends from rising up too quickly. I kept telling myself that I was okay and that I needed to calm down and focus on something other than feeling like shit.

After about 10 minutes the others made their way to the boat as I took a few deep breaths and a few sips of water. The boat crew gave us a snack but I knew that snack was going to turn into fish food if I put it in my mouth.

Everyone suited back up for dive two as I sat staring off in complete silence before deciding to sit it out. My stomach felt the same as it did in Florida, and I knew as soon as I put the regulator in my mouth I would be puking. So I went up to the front of the boat and stared off at the horizon. I made it about ten more minutes before I was bent over the bow, heaving warm bile into the Pacific. Then I wiped my mouth off and posed for this seasick selfie: 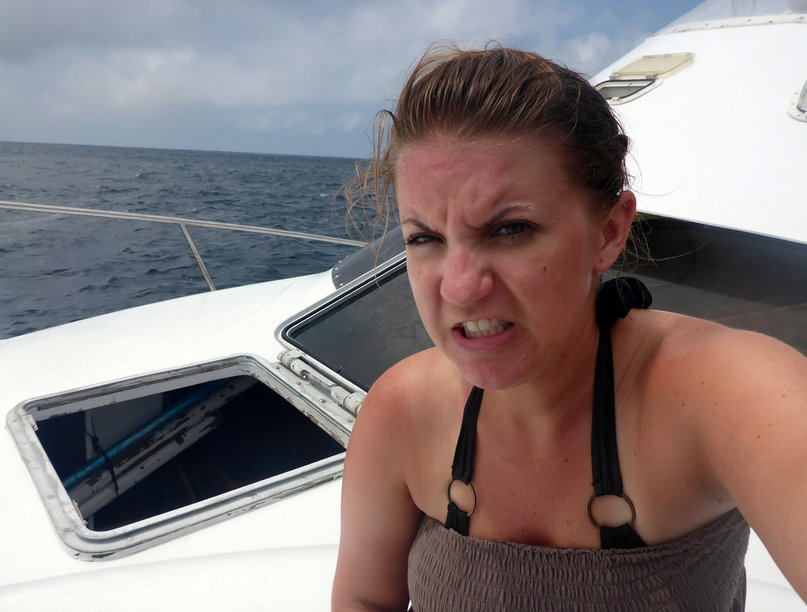 I don’t know what it is with diving, but my stomach can’t seem to handle it. I’ve been on countless boats in my lifetime and I spent more than half of my days in the Galapagos on boats, and I’ve never been seasick until after I’ve been diving.

Weird, my stomach can handle Taco Bell’s destructive goodness like nobody should be able to, but I can’t handle a little compressed air.

*All the underwater photos in this post are from a lovely girl named Dorieke, who was kind enough to send them to me since my camera wasn’t waterproof past 43ft. Thanks Dorieke!

Hiking Sierra Negra and Volcán Chico in the Galápagos

While in the Galápagos I felt the urge to climb to the highest peaks and peer down into the very...
Continue Reading

THAT TIME I THOUGHT SCUBA DIVING WOULD BE EASY

It hardly feels like the middle of December to me. Probably because I haven't bought a single gift, I haven't been...
Continue Reading