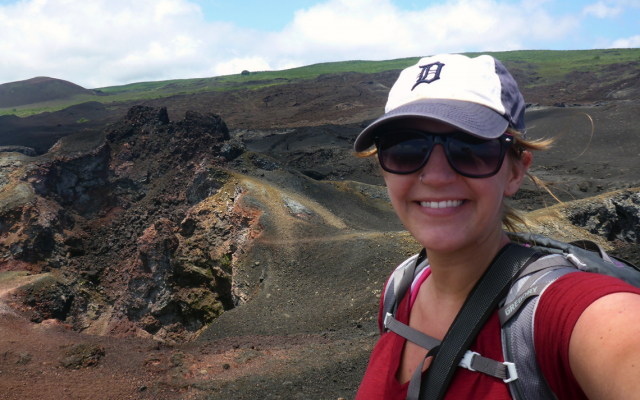 While in the Galápagos I felt the urge to climb to the highest peaks and peer down into the very things that created the archipelago (probably because volcanoes are obviously some of the most impressive works of mother nature, ever). So my first day on Isabela I set out to hike Sierra Negra and Volcán Chico.

I was told to prepare for any kind of weather—one minute you could be walking in the pouring rain through ankle-deep mud, and the next scrambling over slippery lava rocks in the scorching equatorial sun. So I stuffed my backpack with plenty of sunblock, a poncho, camera gear, and enough water and snacks to last a couple of days if necessary. Knowing how much of a sweaty mess I am, I threw on a moisture-wicking undershirt beneath a tshirt, along with a baseball hat and sunglasses. The only place I was failing were the mesh running shoes I was wearing since I was too stubborn to weigh down my backpack with hiking boots while traveling.

Once I was all nerded out, I jumped in the bus and we made our way up winding dirt roads for about a half hour, passing the occasional hiking resort and donkey hidden in the trees. 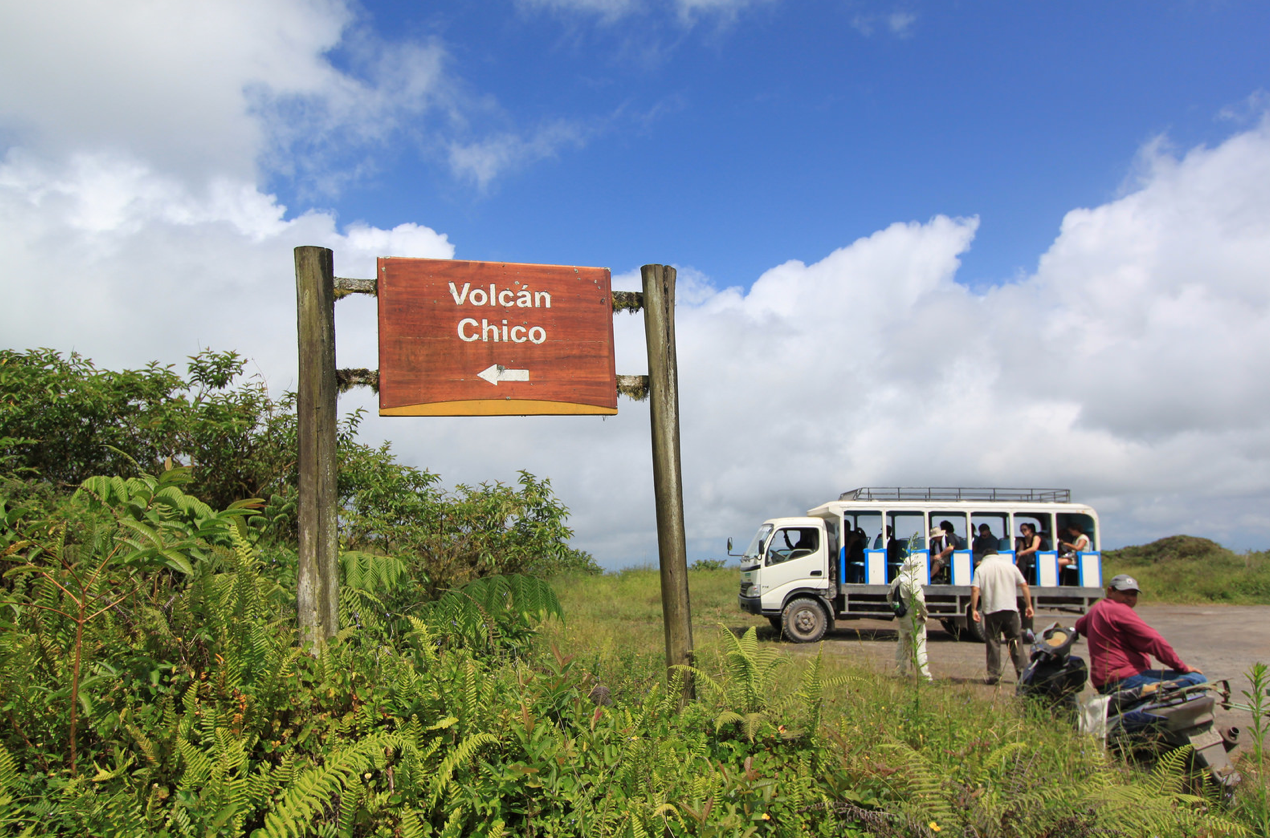 The truck dropped us off at the hiking trail and we set out in the already-hot morning sun. Within the first few minutes I was sweating and panting my way up an incline that had me double-guessing whether or not I was physically ready for this. Thankfully the clouds moved in almost just as quickly and the dirt path became more level. There wasn’t much to see for the first hour or so, just the occasional misty panoramic glimpse of lush green trees and hills as we walked through the clouds. Luckily the mist was hardly noticeable and the ground was bone dry which made the hike relatively simple.

As we walked we grabbed guavas right off the trees, ripping them open and eating them like we hadn’t eaten in weeks. 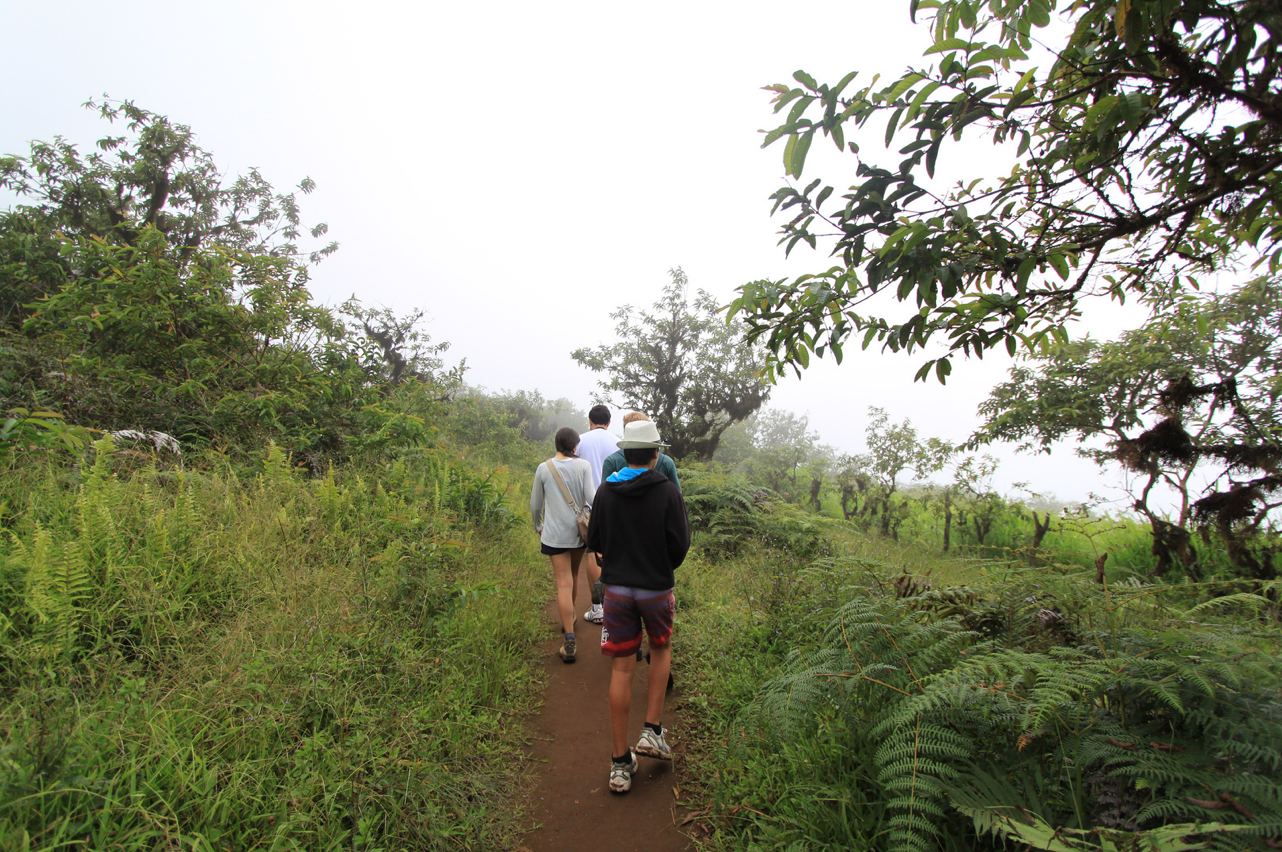 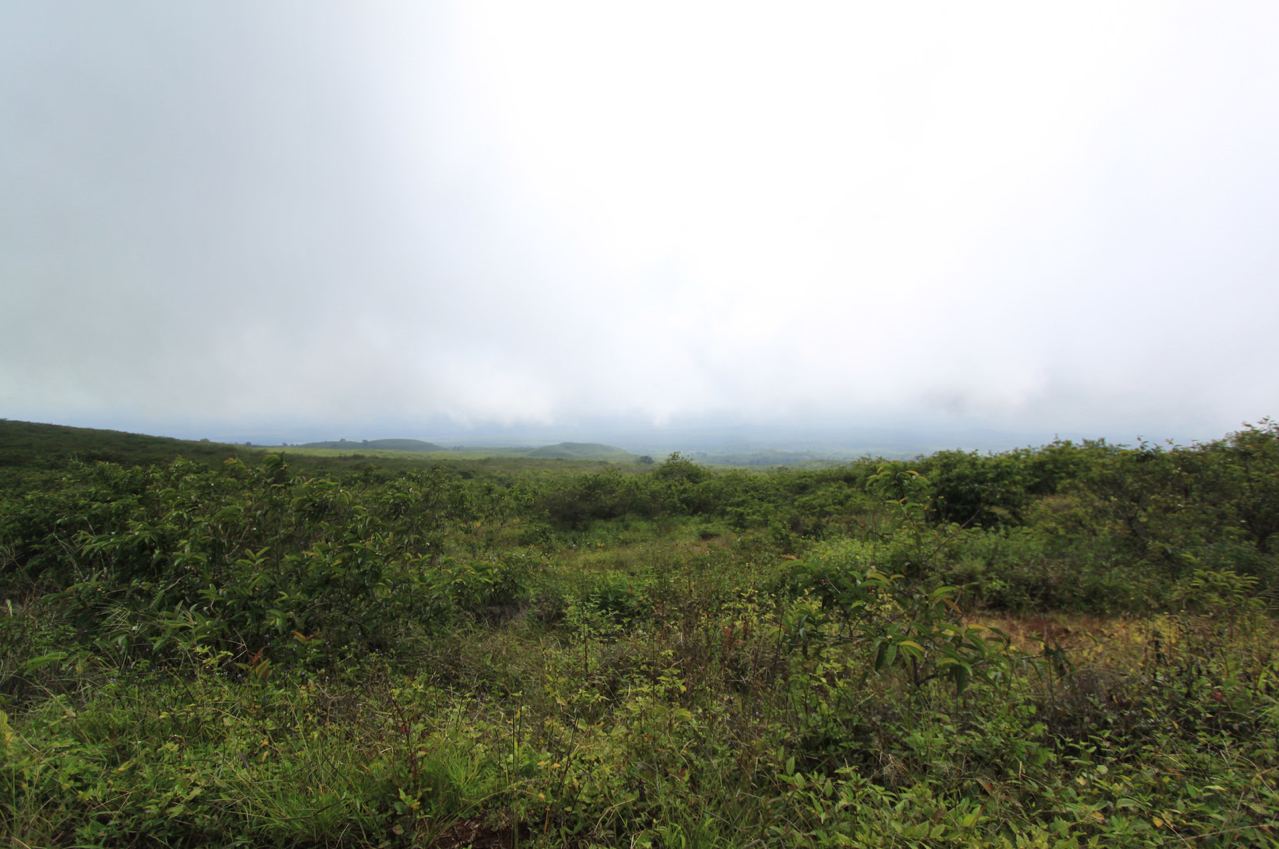 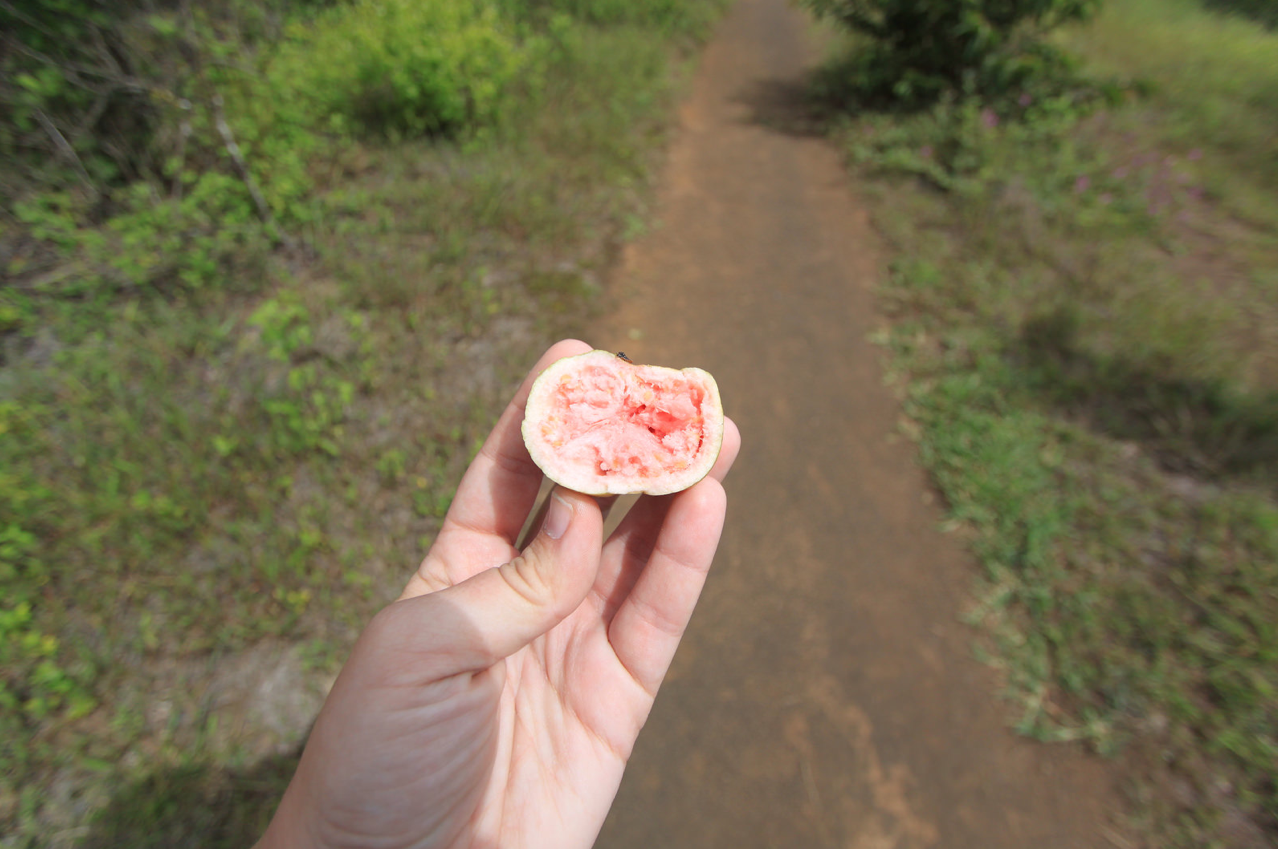 Sierra Negra is an active volcano that rises 1,124m (3,688ft) above sea level, and its caldera is the second largest in the world at around six miles wide.

Before we knew it the caldera seemed to appear out of nowhere. As promised, it was massive, and the clouds quickly broke over top of it finally giving way to vibrant blue skies. The entire caldera floor was covered with old lava flows, some areas much darker from the 2005 eruption that lasted for ten days.

At this point I was having a bit of an “is that all there is?” moment. It was cool seeing Sierra Negra, but other than the fresh guavas I wasn’t sold that it was worth the otherwise uneventful hike. 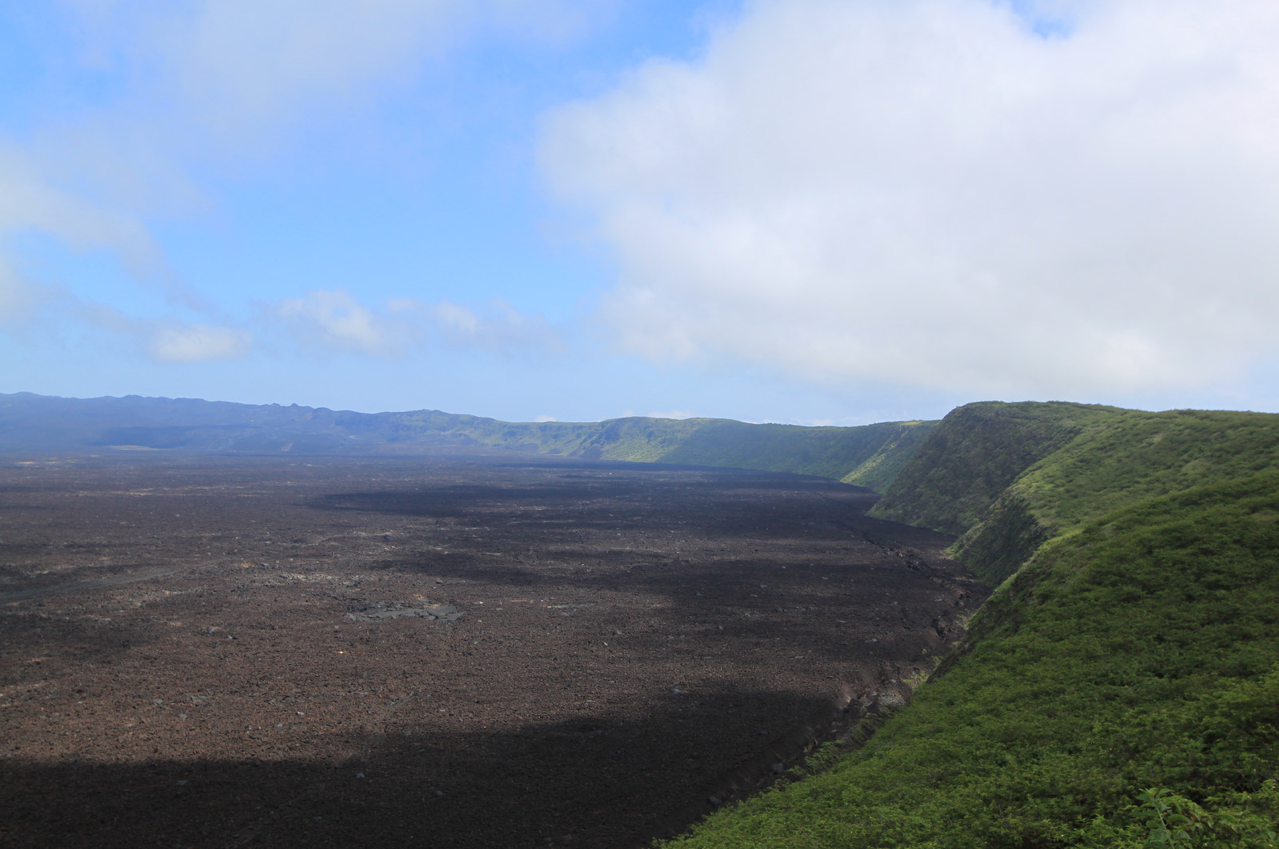 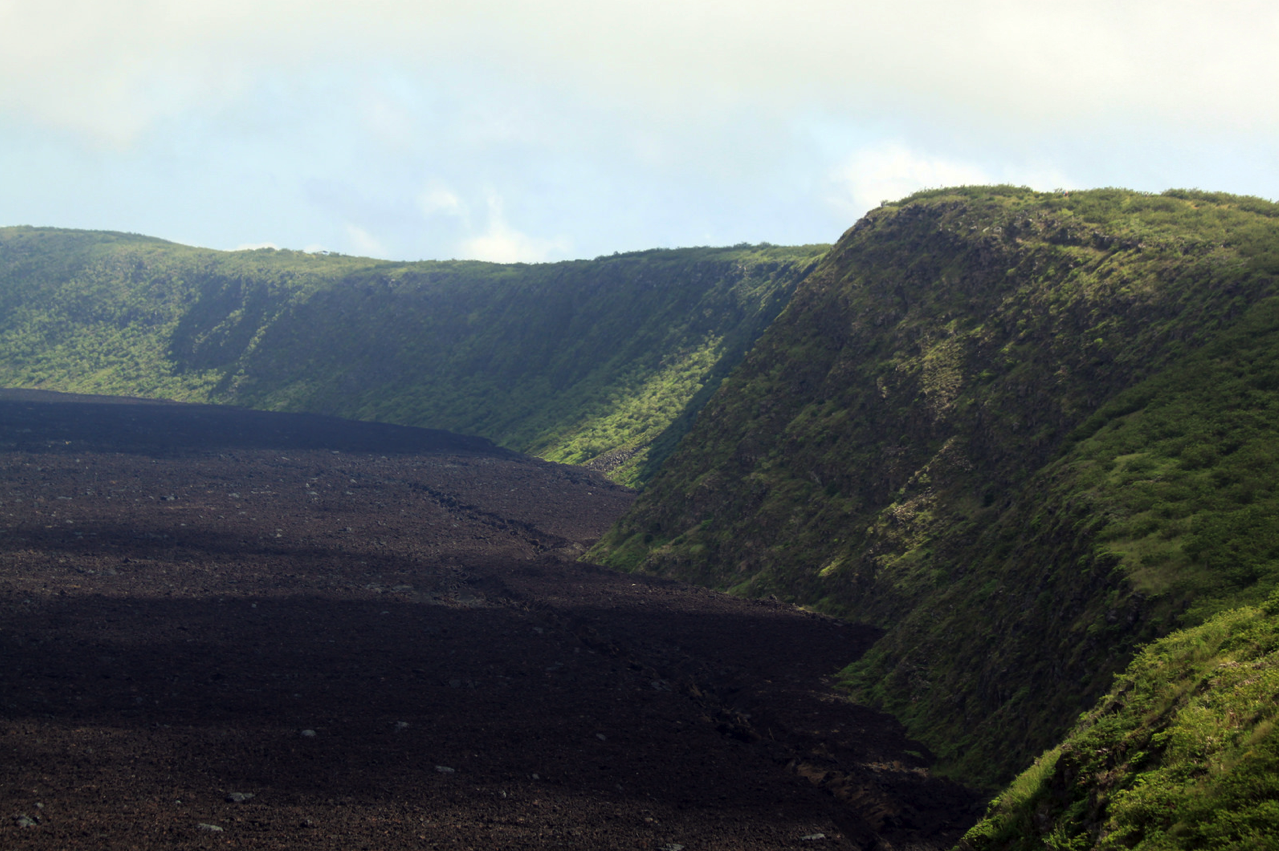 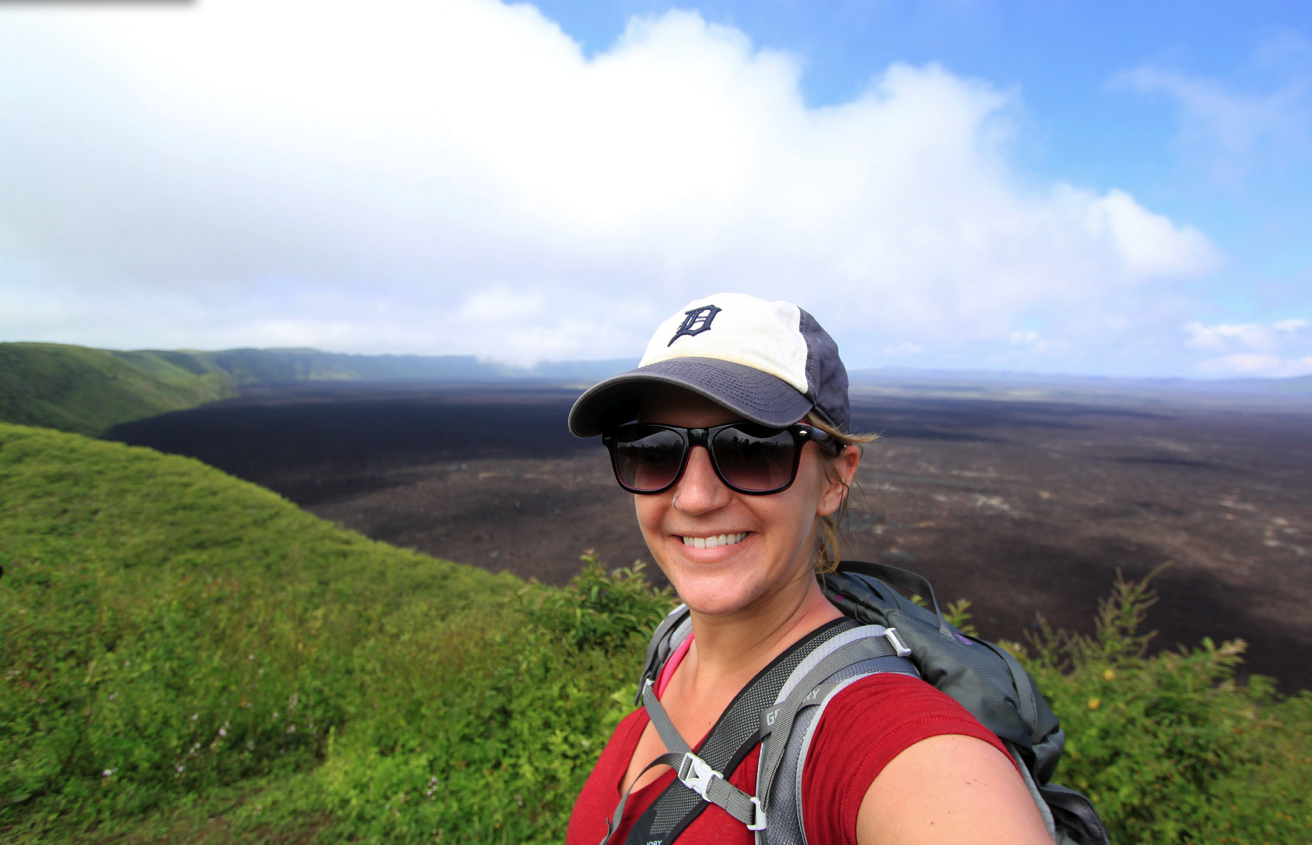 After walking alongside the rim for a bit, we had a fifteen-minute picnic in the shade of a tree while the guide warned us about the strenuous hike that was to come.

“We’ll make our way across a rocky terrain of loose lava rocks for about 45 minutes until we reach the end of the hike. But the walk back is almost entirely uphill, so only go if you have enough energy to climb back. And you better layer on the sunscreen now because there’s no shade.”

Everyone shoved energy bars and bananas in their mouths and took a few gulps of water. From our group of about 20, only one pair stayed behind—a father and his roughly 8-year-old daughter who was already ready to call it quits (yet another reminder of why I’m glad to have zero children).

Within a few minutes of walking the grass disappeared and the only remaining plants were cacti shooting straight out of dried lava. The ground below us changed from brown dirt to red rock to crystalized black lava. I was completely blown away by the size of the lava fields, the hollow lava tubes running down the sides of the volcanoes, and the incredible amount of dried layers piled on top of one another (but the OCD freak in me just wanted to pick and peel at them one by one). Some areas seemed frozen in time—you could see where the lava flow had rolled over the sides of cliffs. 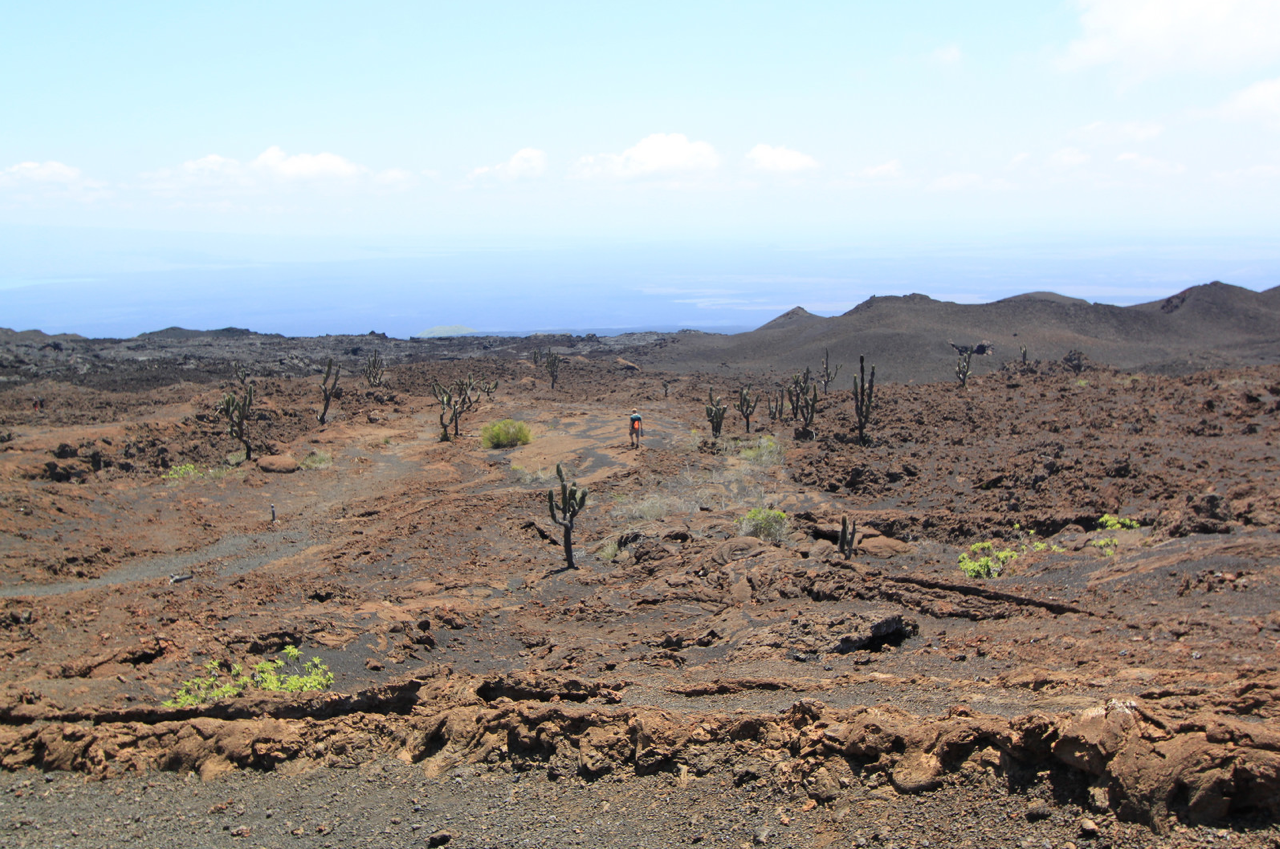 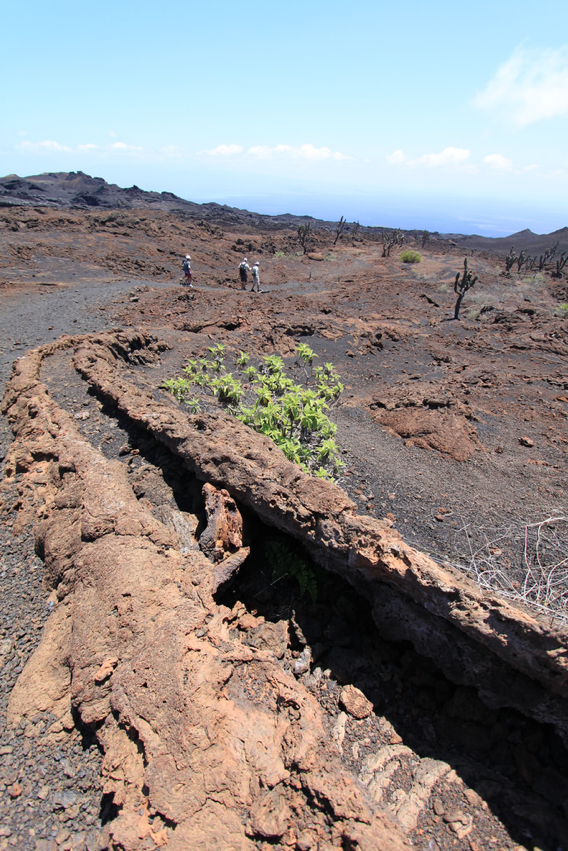 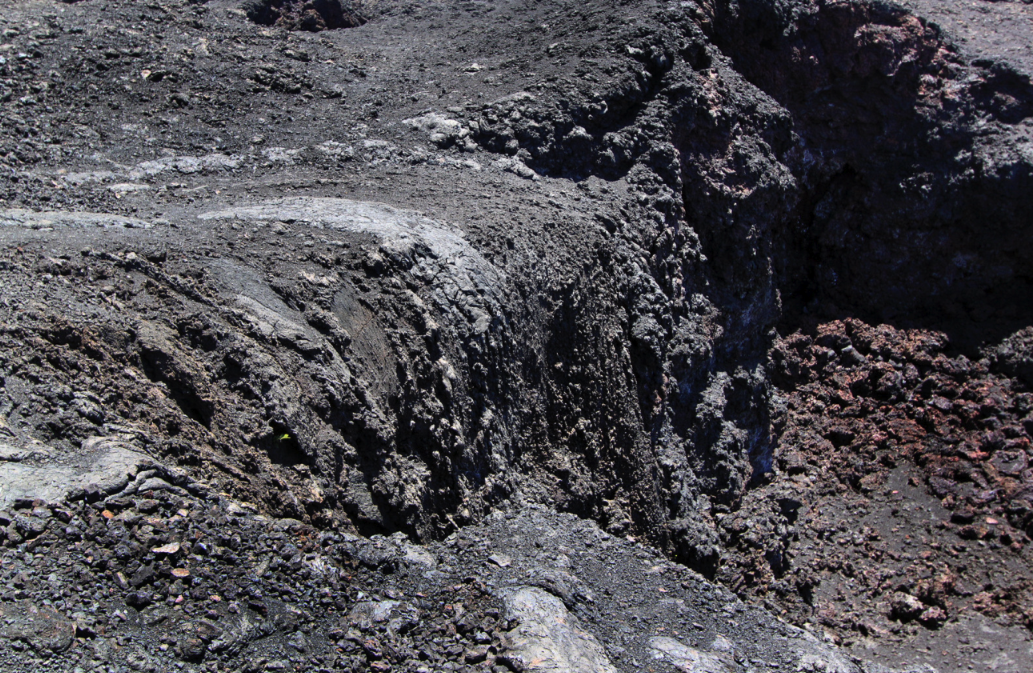 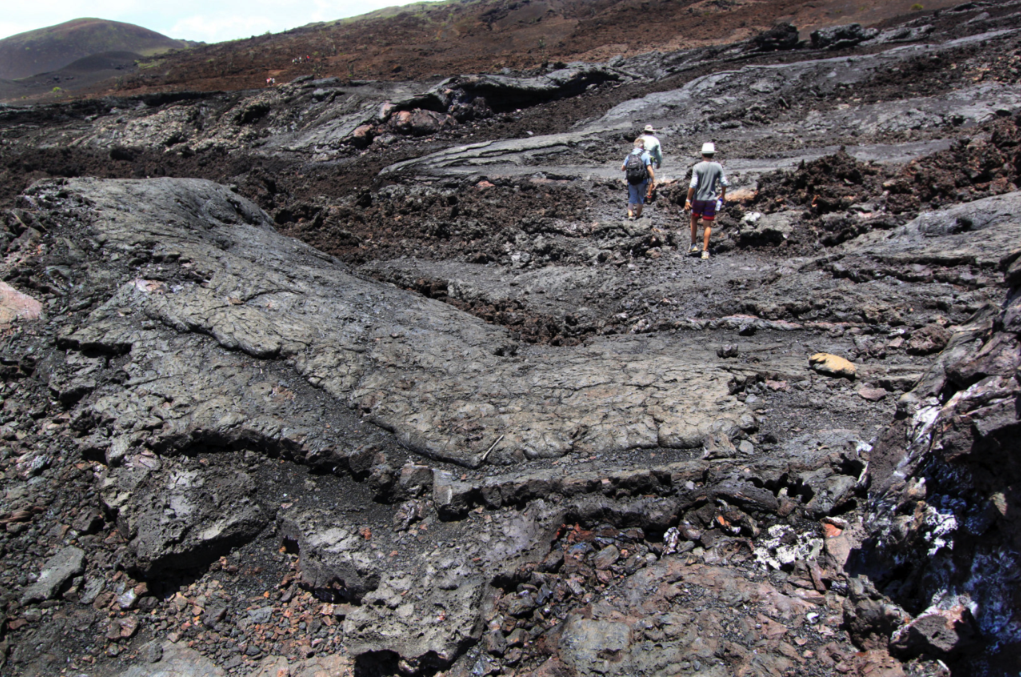 Volcán Chico is more of a collapsed/extinct crater, where several volcanoes have merged to create fissures and mountains within an environment that seems otherworldly. This made for an impressive landscape where you could look in almost any direction and see lava flows that had made their way down to the ocean below. And though we didn’t see any live lava, there were quite a few sulphuric vents with steam rising and ferns growing up inside them from the rocky ground.

It sounds super corny, but once I was standing at the top of that windy peak it was absolutely incredible to get a firsthand look at how the Galápagos Islands were formed through such raw, uninhabited beauty and force. 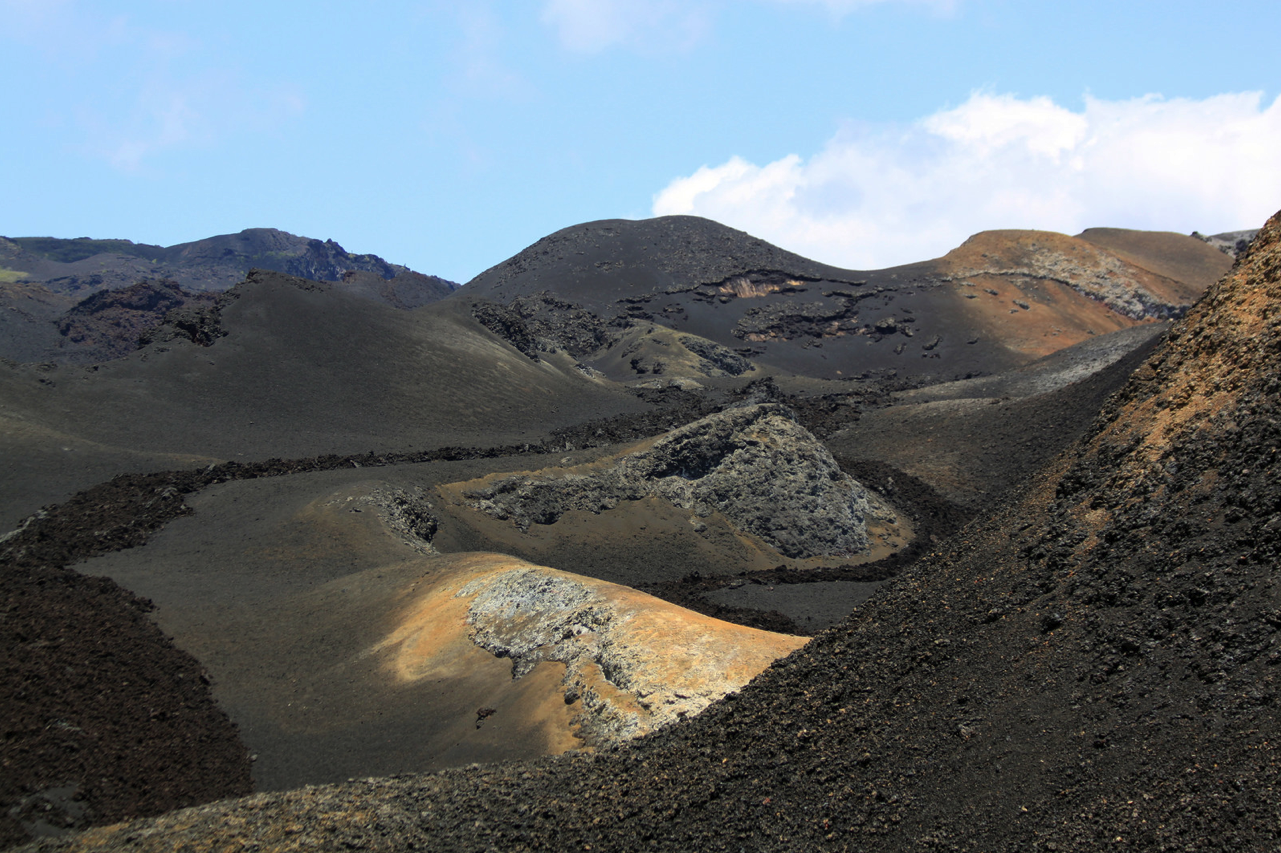 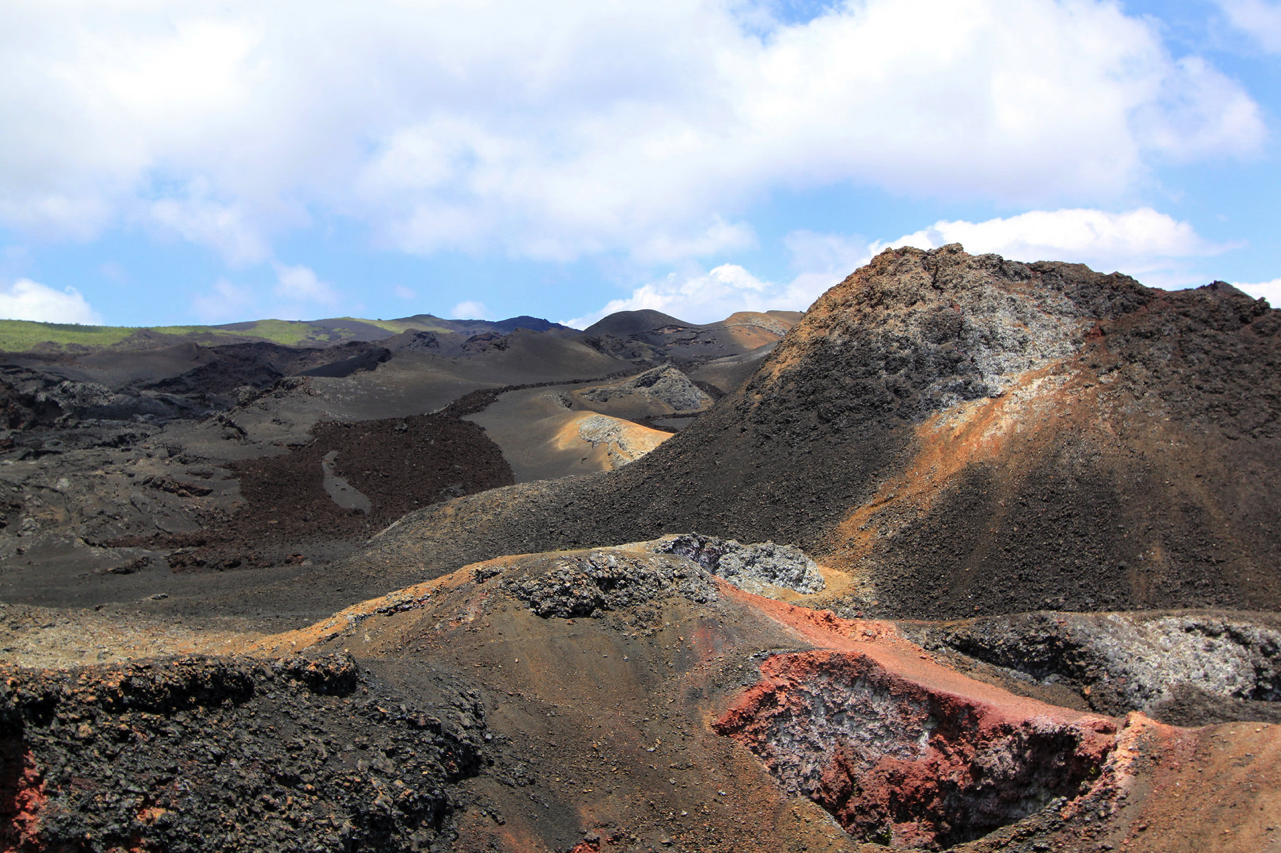 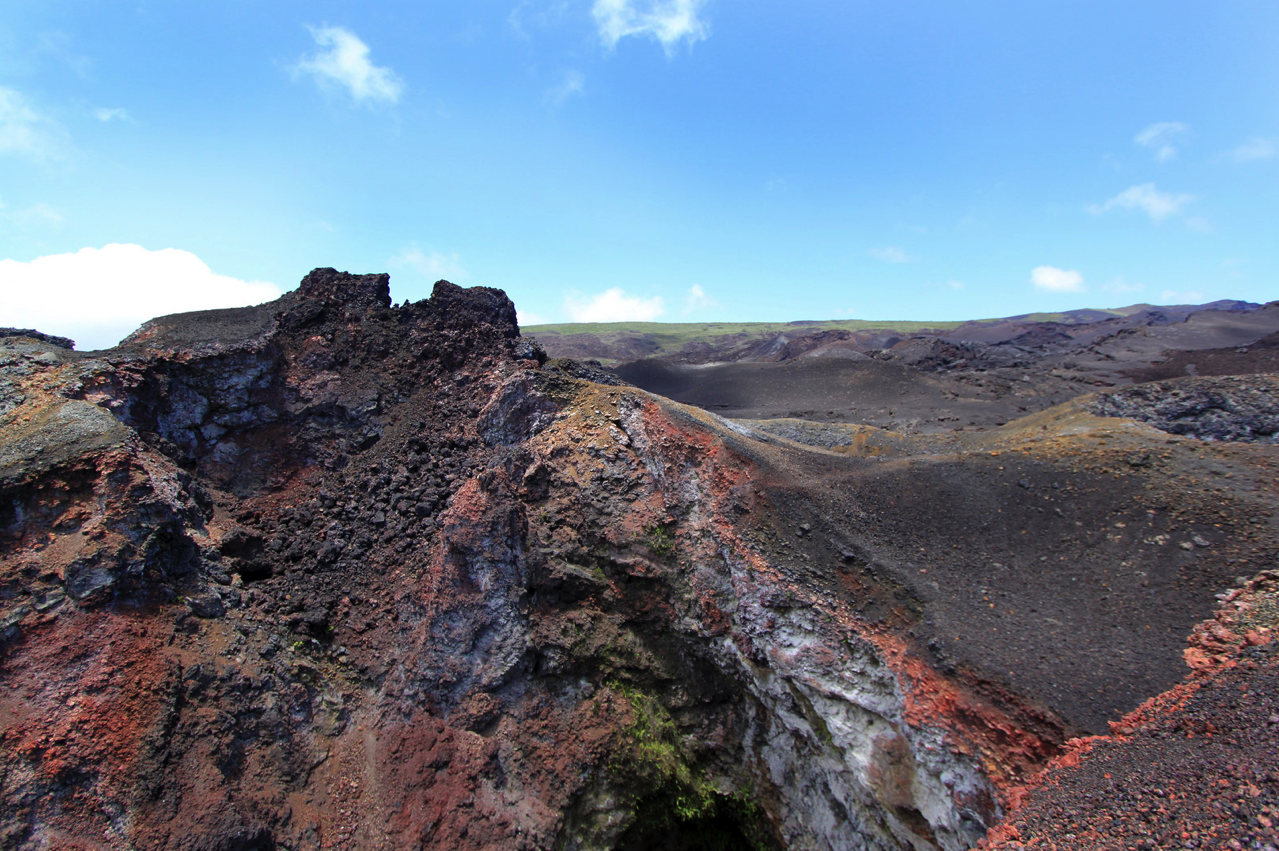 On the hike back I was one of the first ones to start the trek and I was determined to keep it that way. No matter how strenuous the journey, I refused to let myself look like an out of shape noob. I was going to make this shit look easy.

So we started walking, and I slipped. A lot. My ankles twisted and cracked every ten steps. My non-hiking shoes and short legs were a terrible combination for making my way up those thigh-high steps of loose rocks. We were all chugging water between deep, hard breaths and it was the first time on the hike that nobody was talking. But you could tell everyone was laser-focused on making it back to the picnic area without looking like a sissy.

Finally after what seemed like 100 treks up a grueling real-life Aggro Crags, we were all stripping off our clothes at the picnic area and splashing down with water. We only had a few minutes to rest before setting out for the last 1.5-2 hours downhill back to the truck.

I was back in my room by 330pm, absolutely covered in dirt. I had a grandeur idea of rinsing off in the ocean and napping on the beach, but when I couldn’t gather the energy to walk outside, I laid a towel across the bed and passed out for my first two-hour vacation nap. 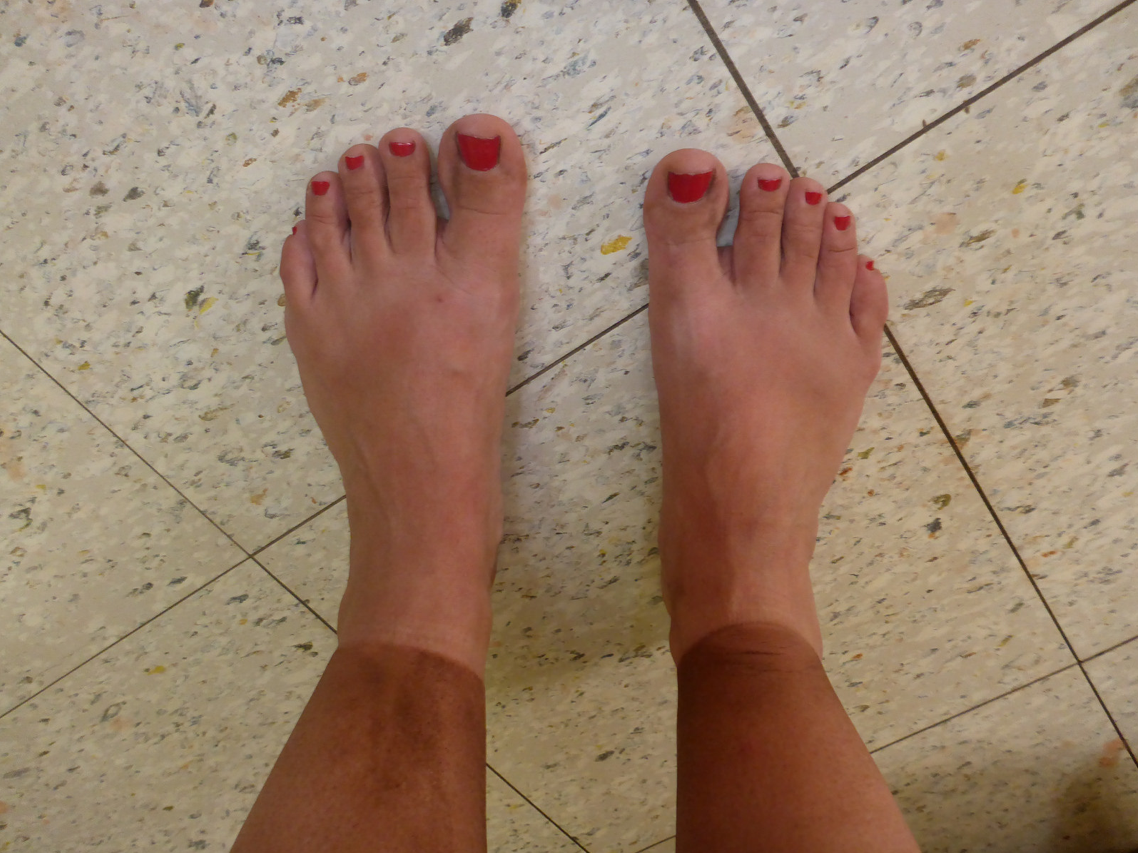 IS IT WORTH IT?
Yes, especially because the tour is one of the cheapest on the islands at just $35 (and that includes a bagged lunch). Like I said, the hike up to Sierra Negra wasn’t exactly the coolest thing in the world, but continuing onward to Volcán Chico definitely made everything worth it. So don’t bitch out at the picnic spot. It’s not particularly strenuous, so long as you’re in decent shape and don’t mind getting a little sweaty. Just come prepared with plenty of sunblock, water, and proper footwear and you’ll be fine. When I woke up the next day I could hardly walk because my toes felt like they’d been murdered in those non-supportive shoes. Lesson learned!

THAT TIME WE KILLED AND ATE A PET BUNNY

“Just slit the throat, cut the anus, and let it all fall out." Not exactly the first words you want...
Continue Reading