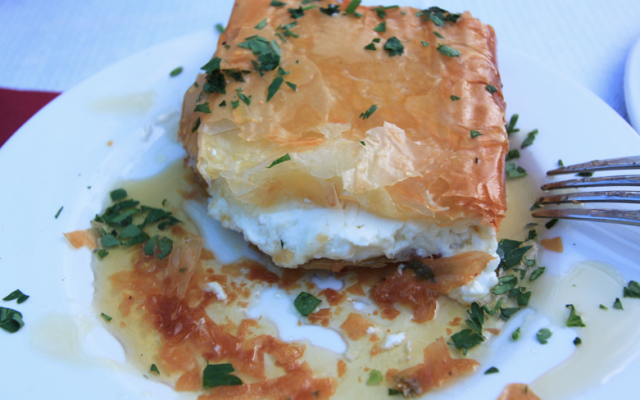 With its economy deep, deep in the shitter, I wasn’t really sure what to expect while I was in Greece. So I split my time between the ruins of Athens and the relaxing beaches of Crete. Both provided two starkly different views of Greece, but they also had two fantastic things in common: amazing hospitality and even better food. Seriously, not only was every single thing I put in my mouth worthy of a full-on addiction, the people putting these things on my plate wanted nothing more than to make sure I tasted everything, loved it, and ate some more.

I arrived in Athens right after an underwhelming couple of days in Italy. Maybe I went to the wrong places, but Rome just felt too busy, dirty, and touristy for me (though to be fair, the ruins around the Colosseum were beyond awesome). And frankly, I’d had similarly equal (if not better) Italian food in Little Italy. So on the drive from the airport to the hotel I was worried that the run-down streets of Athens would leave me feeling the same way. It felt old, dirty, and every surface was newly adorned with layers of graffiti. For a minute I thought about turning back to the airport to skip Athens all together and head to the islands.

Then we got to our hotel, the Herodion, and suddenly all was right in the world.

Considering the pocket change we paid, the hotel made me feel like a baller. Located at the base of the ultra-touristy Acropolis, it was just outside of the seemingly cash-strapped city streets and just a few blocks from the restaurants and shops of the Pláka. Aside from it being cheap enough for my travel partner Marcus and I to each have our own room, there was a rooftop garden just waiting for us to sip cocktails in the jacuzzi while looking out at the Parthenon. But I must say, once we finally made it up there I cracked open a Mythos and it kind of sucked. Reminded me a bit of Busch Light. Stick to food, Greece. 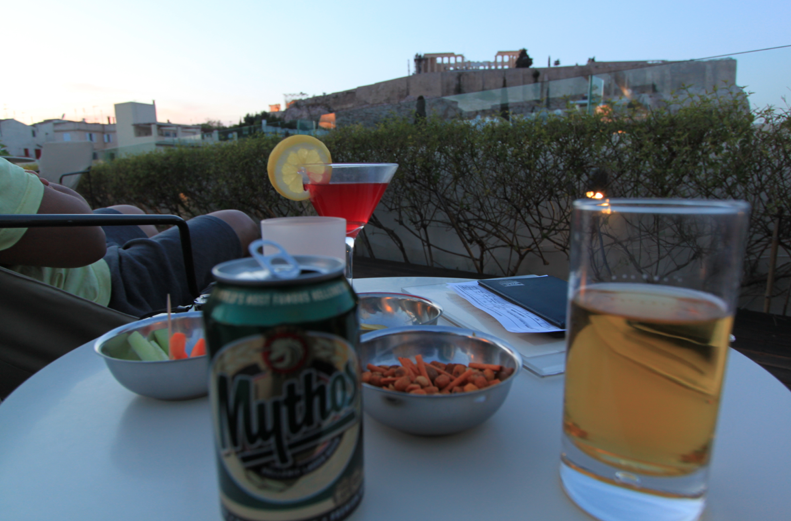 Our first evening in Athens we walked uphill to the Parthenon. It was closed for the evening, so naturally we went for the next best thing: food. Along some winding road down the hill we stopped into a restaurant that we couldn’t even read the name of,  and the food absolutely blew my mind. It was my first taste of Greek food, and I only wish I would’ve been more hungry. But like a true fatty I went straight for the cheese appetizers. Two of them to be exact. Pan fried kefalotyri cheese for €4,50 and feta saganaki drizzled with honey for €6. Holy mind-blowing shit it was delicious. 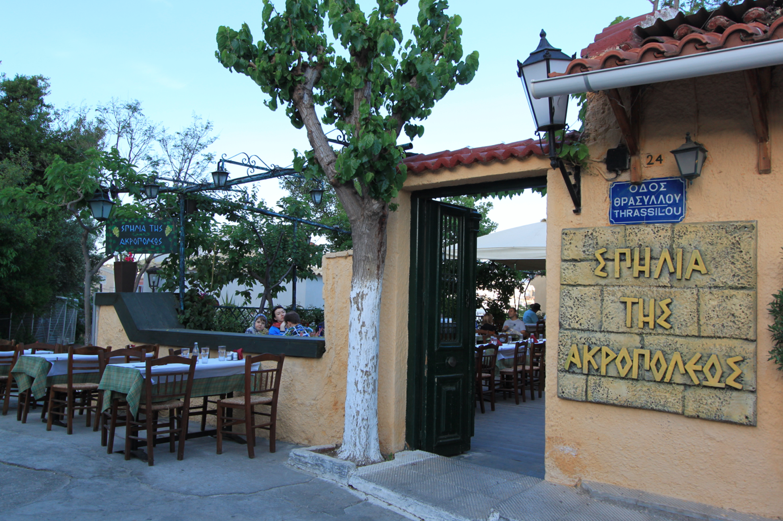 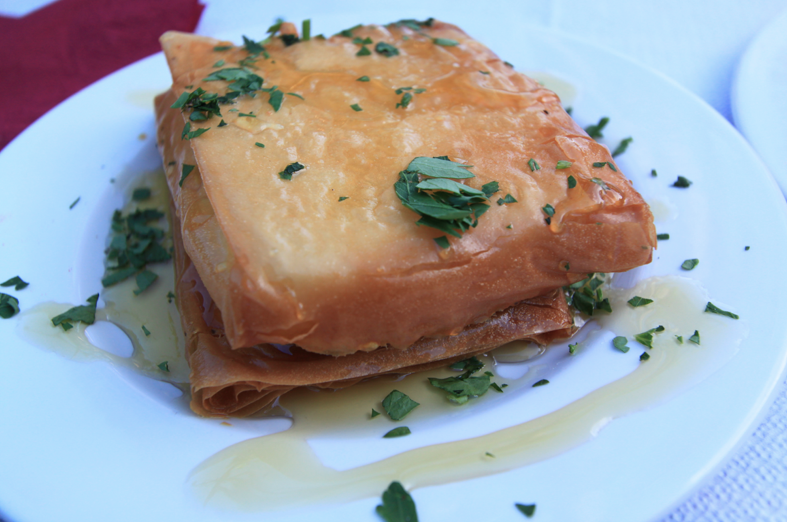 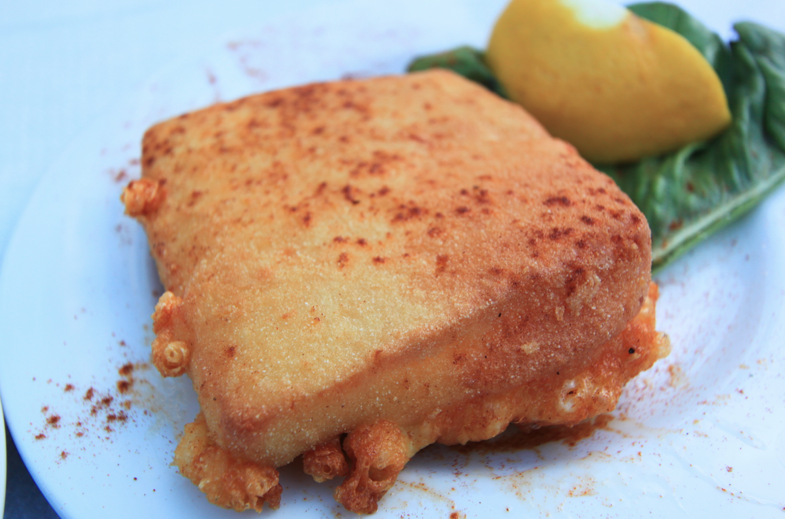 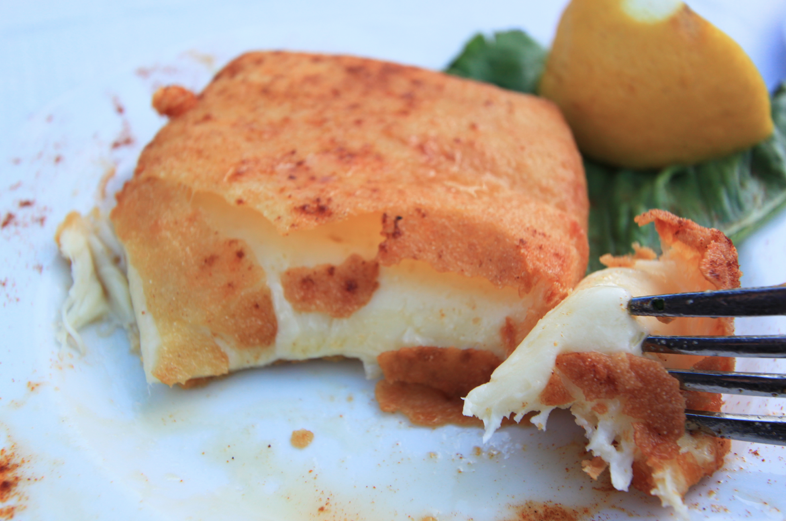 The next morning I was introduced to my first of many deliciously satisfying all-you-can-eat breakfast buffets in Greece. I ate about six plates, which held me over until dinner when we stopped at Plakiotissa. Marcus ordered the always delicious moussaka, and I got stuffed peppers. It’s weird that this place has such bad reviews on TripAdvisor, because we both thought it was pretty damn tasty. Not as amazing as the first place we went, but still a solid, satisfying meal. We both scarfed down our meals until we were uncomfortably full, and when we thought we could eat no more, our new waiter friend brought us out free dessert. If this was a typical tourist-friendly Greek restaurant, I can’t even imagine how good the local spots were. 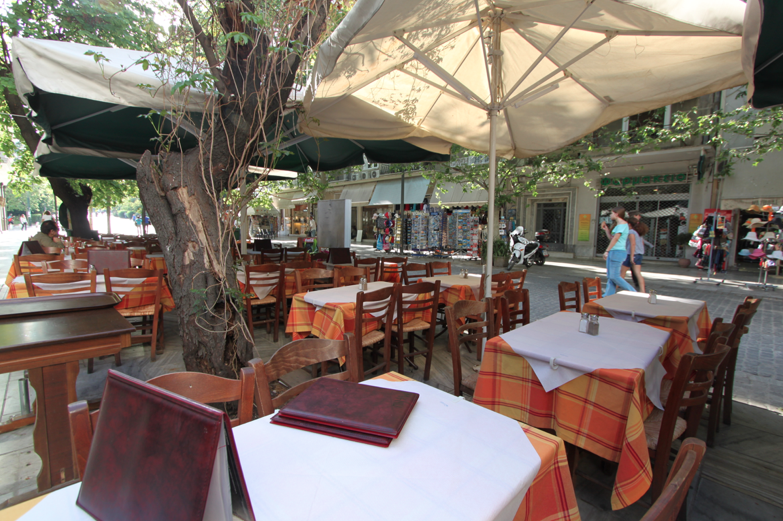 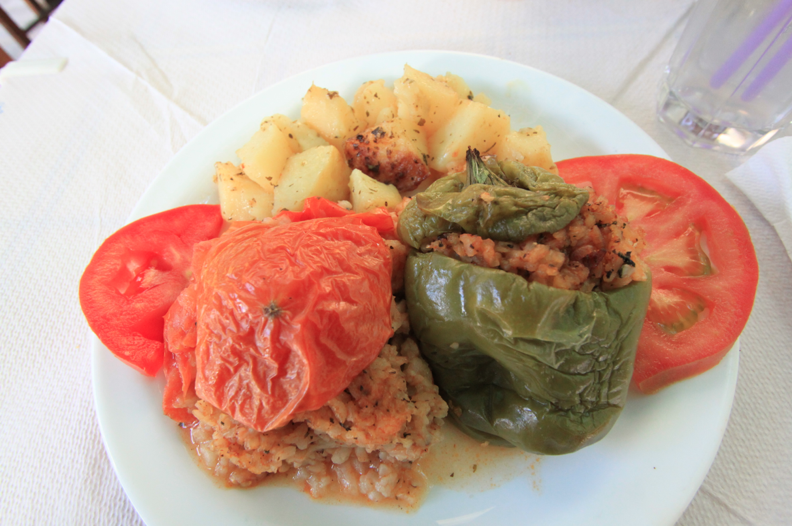 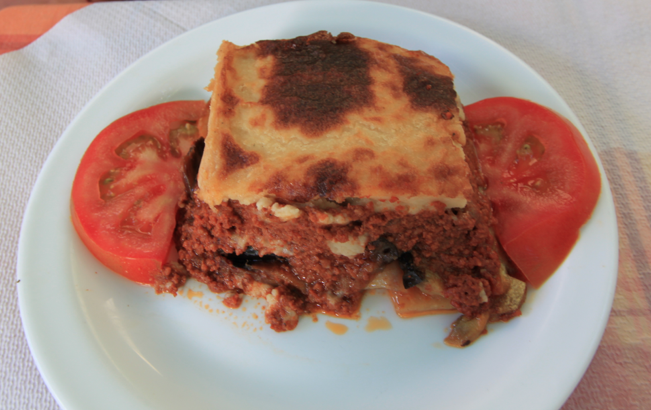 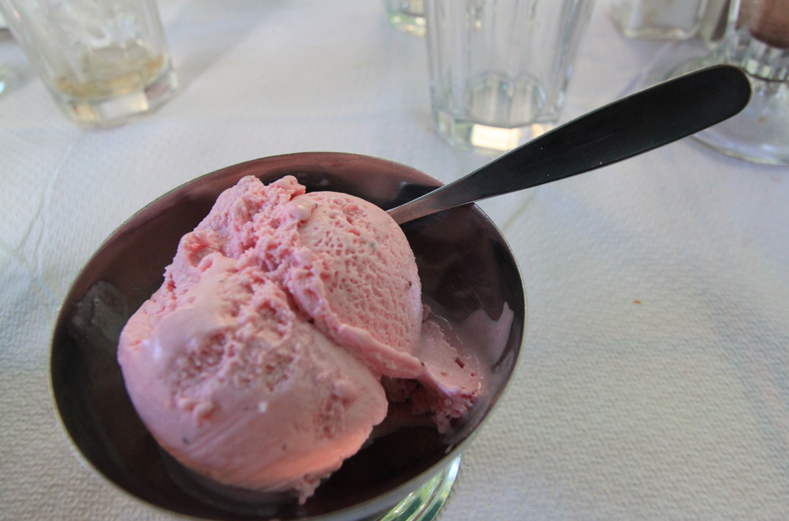 Ten extra pounds of Kim proved that I fell in love with food all over again in Athens. But it got even better.

I stayed at two different hotels in Crete, the first had buffet meals that were easy enough to sneak into without paying (woops). So of course I did that and sampled everything I could get my hands on. I know, how often do you get amazing food at a buffet though, right? Apparently all the time in Greece. 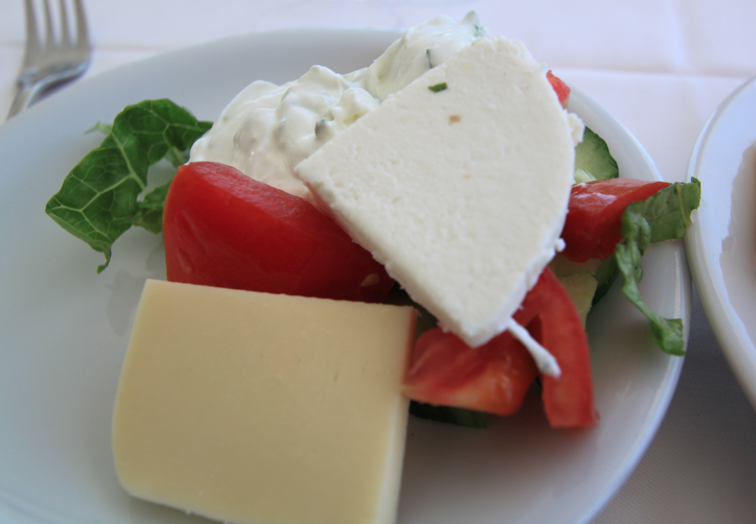 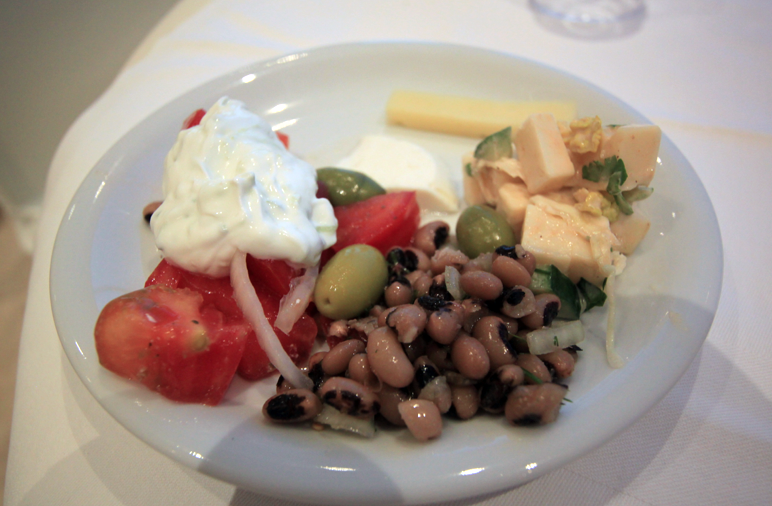 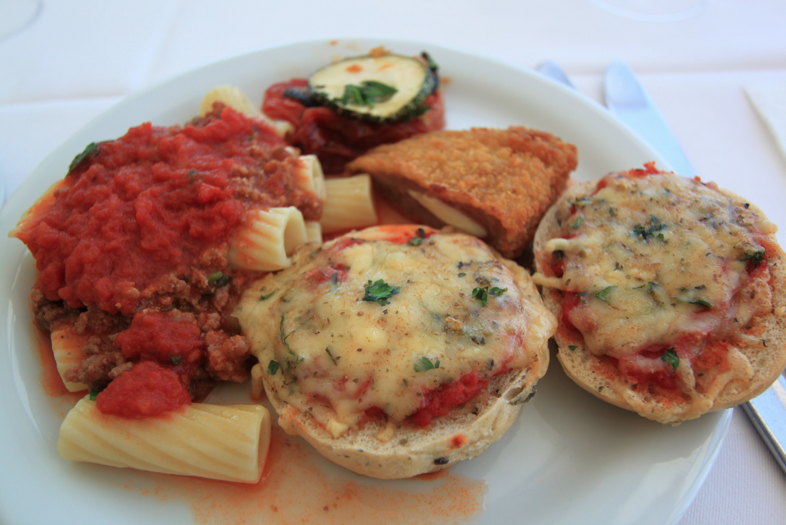 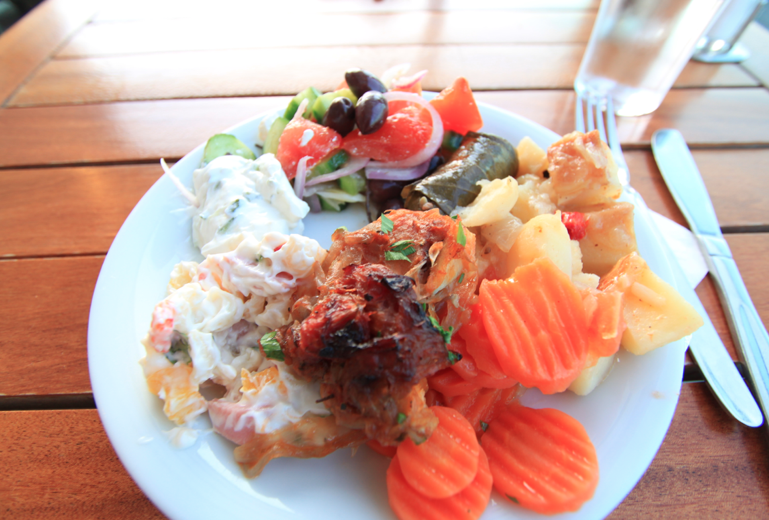 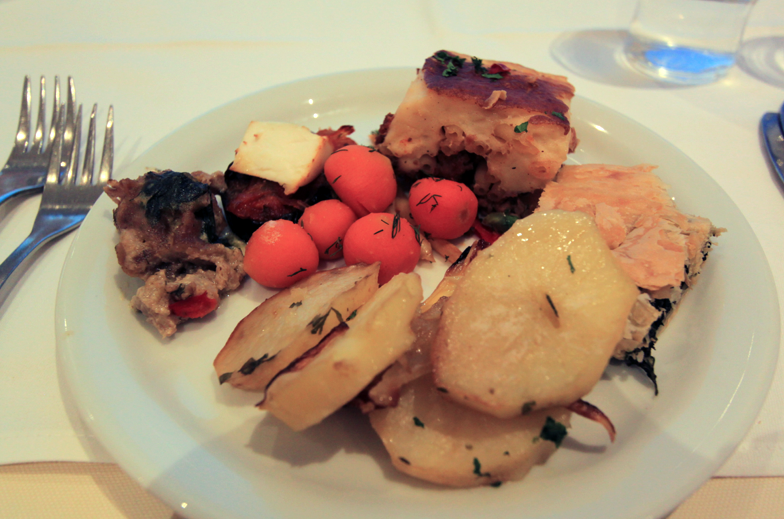 The salads. The stuffed grape leaves. The flaky phyllo layered with spinach and feta. The better-than-Italian pasta. The galaktoboureko. The lamb. The galatopita. I don’t even know what I was piling on my plate most of the time, but I do know that I never tried a single thing in Greece that I didn’t like. I went to several restaurants in Crete and ordered main dishes of things I’d sampled at the buffet, only to be even more wowed, but I know I’ve only barely scraped the surface of awesome Greek food. 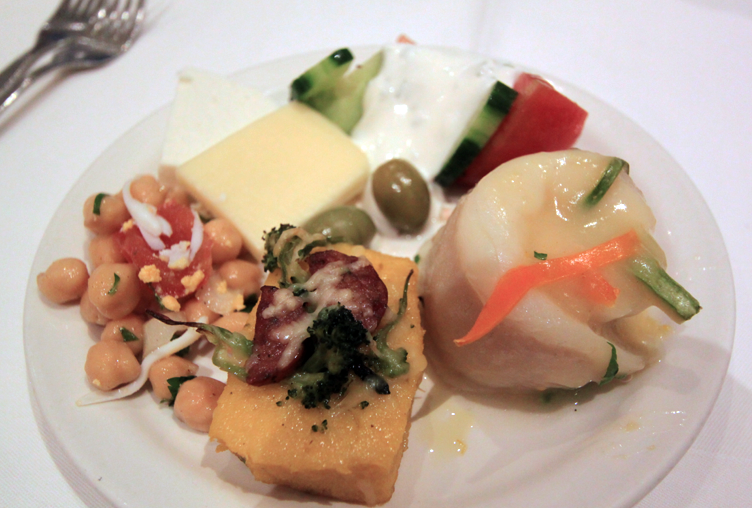 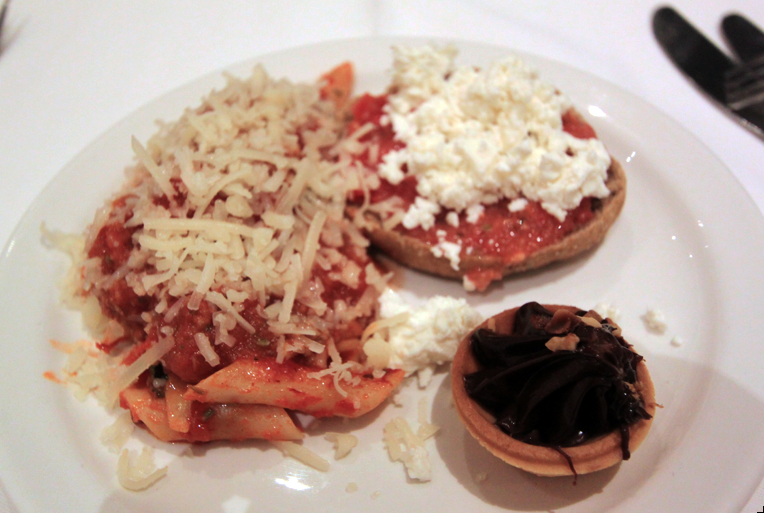 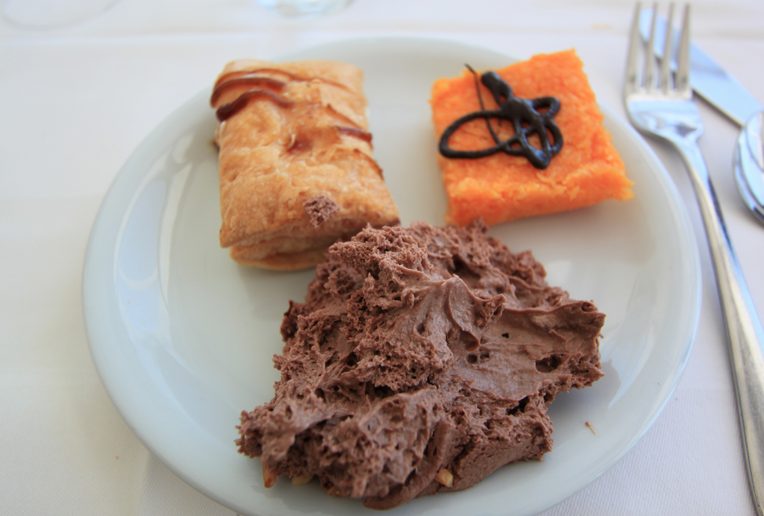 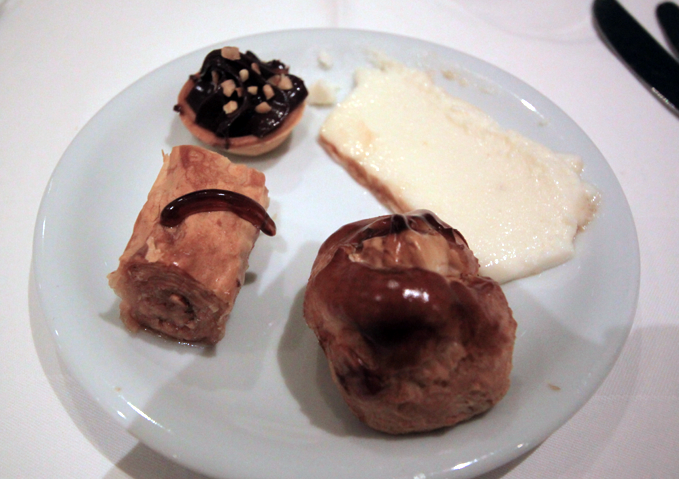 It took all of my power not to throw out all of my clothes and fill my luggage with olive oil, spices, cheese, and whatever else I could fit in there from the airport marketplace. But I figured a cookbook would last much longer than any sort of actual food that’d surely be gone before my plane even made it back to the States, so I picked one up and decided I could make some of this stuff back in New York.

Have I yet? No. From what I can tell, cooking Greek food is super intimidating. But I’m up for the challenge if anyone wants to come over for dinner! I sure as hell can’t cook all that food just for one person.

Moral of the story, Greece has some incredible food. So when life gives a beautiful country financial lemons, travel there and make lemonade in the form of delicious meals and cheap accommodations. Just make sure to keep some cardio in your plan.

I spent most of yesterday not only rehydrating and grazing on comfort food to ease the lingering hangover of my...
Continue Reading