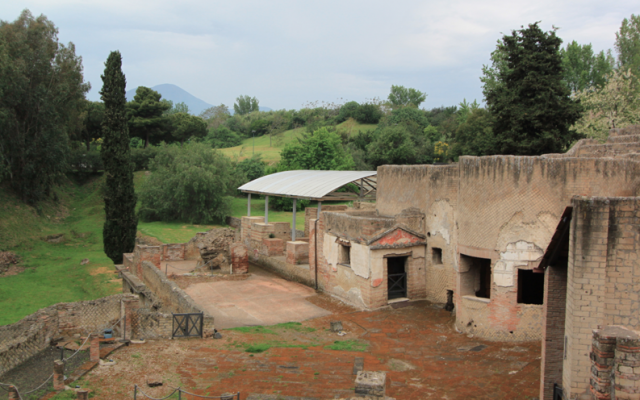 I won’t give you a history lesson because I’m pretty sure everyone knows what happened to Pompeii in 79 AD. And if you don’t, well you can look at just about any other site and find out. More importantly, maybe you should dig yourself out from whatever rock or volcanic ash you’ve been living under (see what I did there?)

While in Italy I went on an 8-person day trip to the Amalfi Coast and Pompeii through Viator. After leaving Rome, we drove for a few hours before the unmistakable silhouette of Mount Vesuvius  began to peak above the horizon. 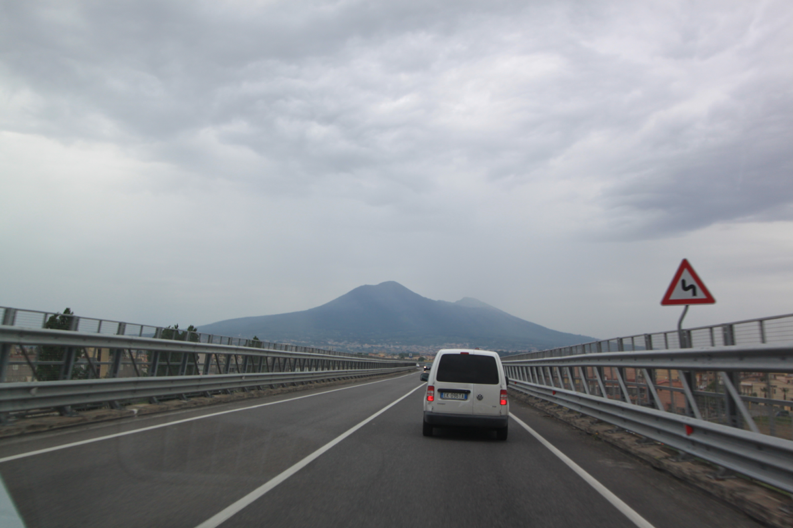 It was awesome. And it was kind of like love at first sight. I wanted to go straight there and climb to the top, then base jump right down into the crater. Fuck the Amalfi Coast. Who needs gorgeous cliffside scenery when you’ve got vengeful volcanoes of destruction to explore?

But Pompeii was the last stop on our trip so we kept driving (as a little piece of my heart broke), finally making our way to the cliff-hugging roads of the Amalfi Coast. The next few hours—spent exploring the painfully rocky Spiaggia Grande barefoot, doing shots of limoncello with two women who were probably as old as Italy itself, and coming back to the van late thanks to a poorly marked underground bathroom, causing me to lose my picture-taking window seat to a woman who couldn’t log off Facebook long enough to appreciate the view—is a totally different story in itself. But I was more than ready to leave the overcrowded coast behind and go wander around the ruins.

That winding cliffside road out of Amalfi was clearly built for tiny compact European cars. Hell, our eight-seater van was almost too big to comfortably zig and zag without riding the brakes, so I really don’t know what those truck drivers were thinking when they decided to take the coastal route with their eighteen wheelers. Every 50 feet or so we’d have to stop and wait for some unseen vehicle to make its way around the bend before proceeding. This was never a quick task, each stop took about 20 minutes while people put their cars in park and walked up to double check for oncoming traffic. This put us in Pompeii almost two hours later than expected.

When we finally got there our tour guide was kind of a huge jerk. Since we were late I understand he wanted us to see as much as possible still, but the constant rushing was really aggravating and left us with no time to explore or even take a decent photo. At first I was following his commands, running around snapping pictures ferociously and trying to absorb every bit of information he rattled off like an auctioneer. But then I just stopped listening and kept trying to take pictures.

The ruins were absolutely amazing, and so well preserved that it’s hard to believe they were constructed SO long ago, and were once covered in nine feet of volcanic ash. 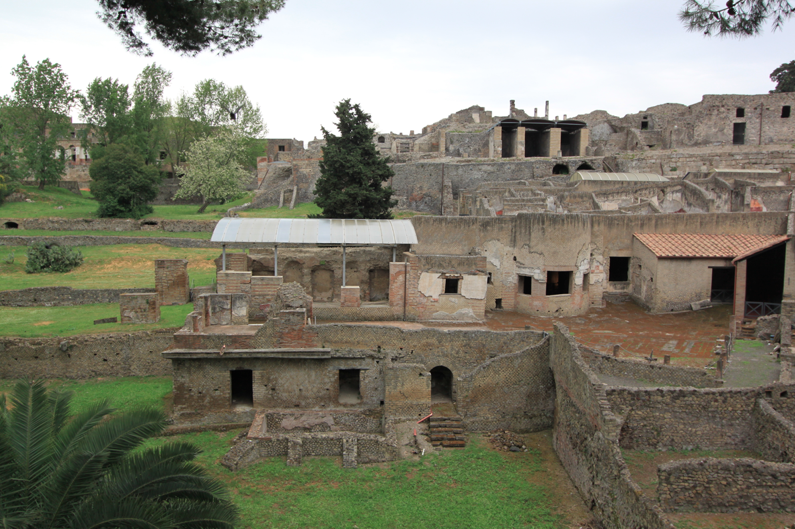 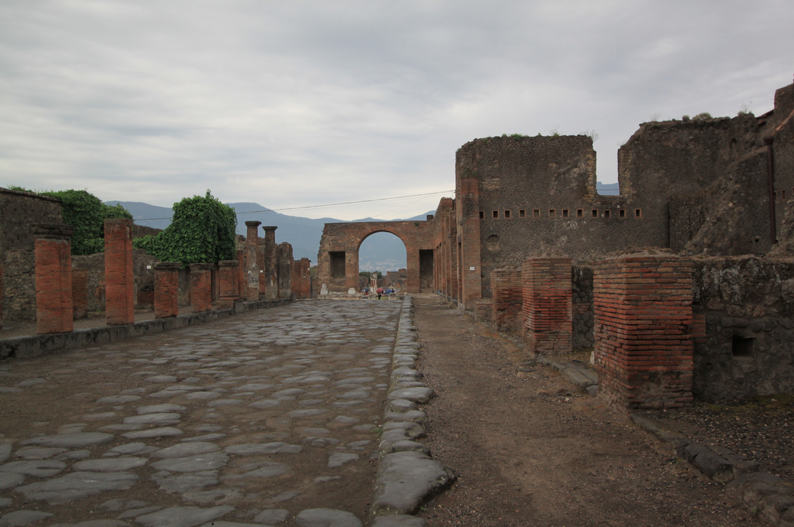 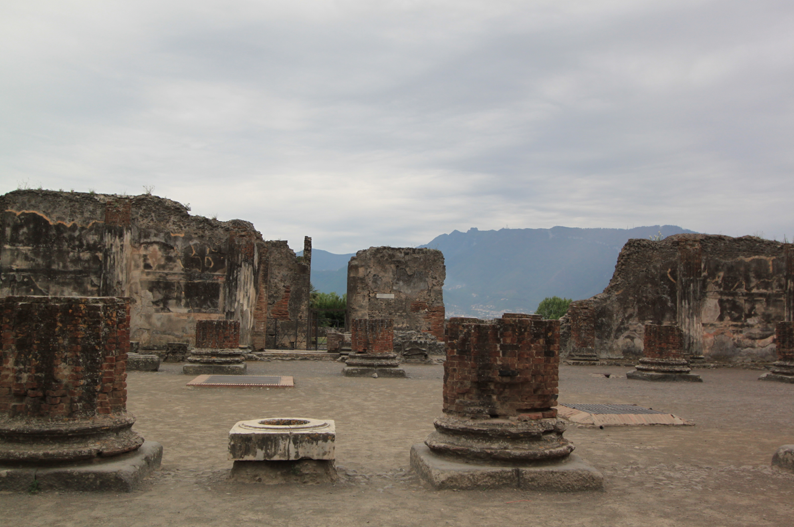 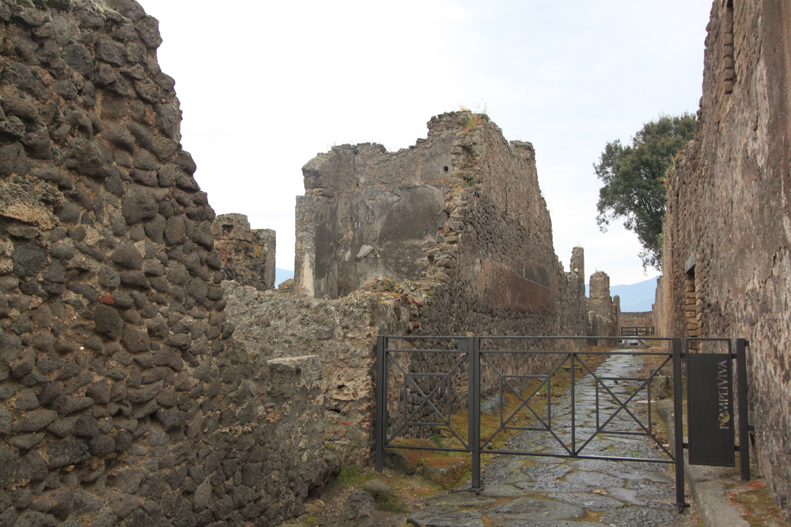 Like seriously, how is it possible some of these pillars are still standing? Also, how much better would this shot have been if Vesuvius would’ve exploded with awesomely hot glowing lava right then and there? 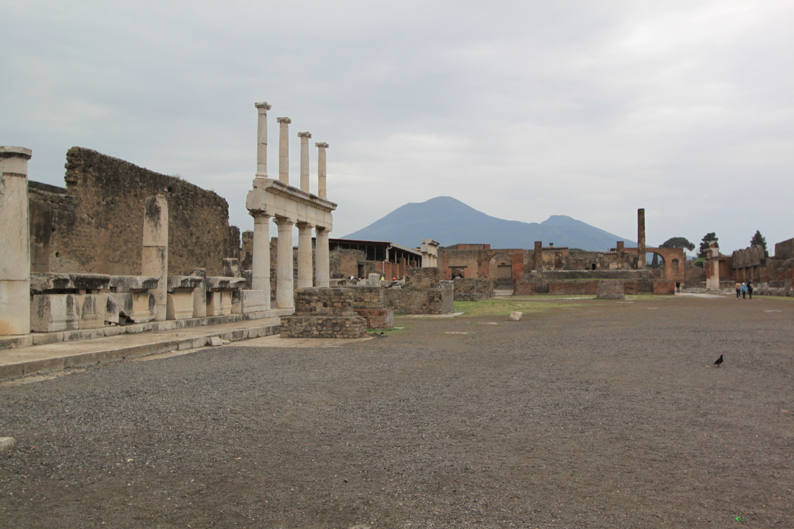 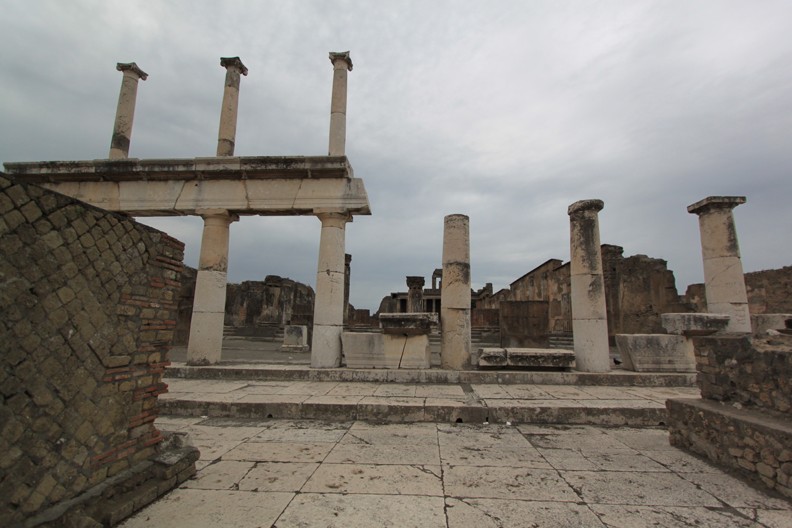 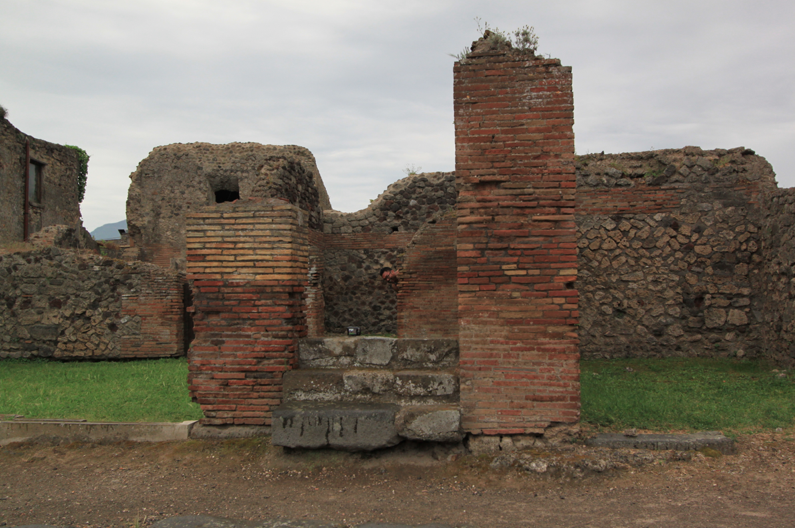 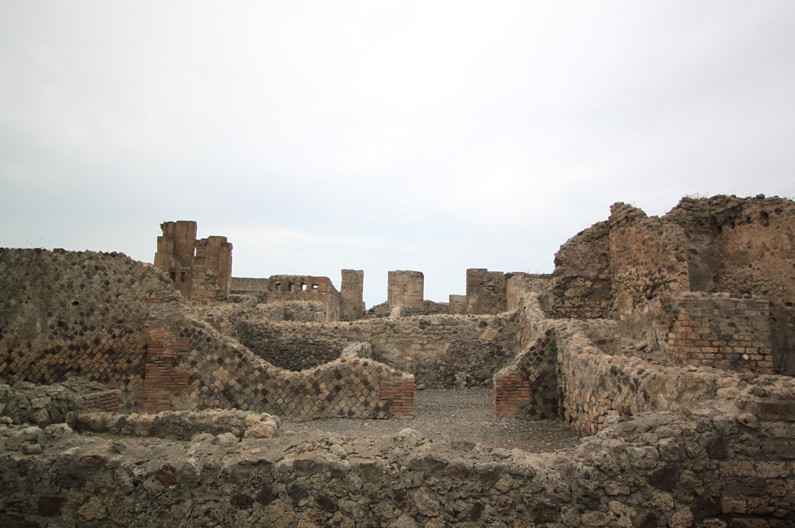 Different areas seemed to have suffered varying degrees of damage, kind of like the path of a tornado. One of the most fascinating things I saw was inside some of the buildings like this bathhouse below. On the frescoes you can actually see the line of deterioration caused by the surge of volcanic ash that rushed in and destroyed all that it touched. 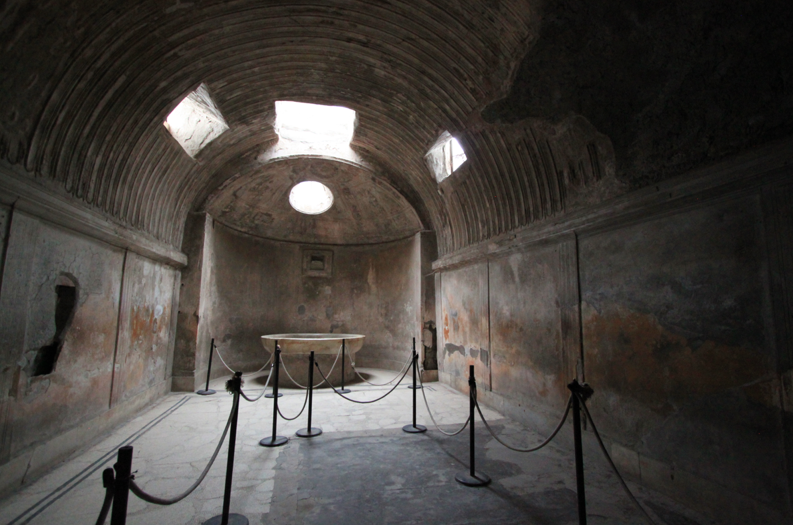 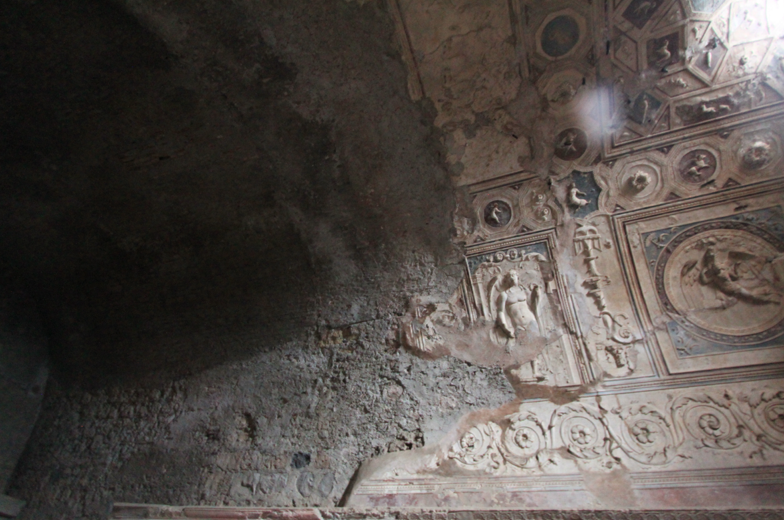 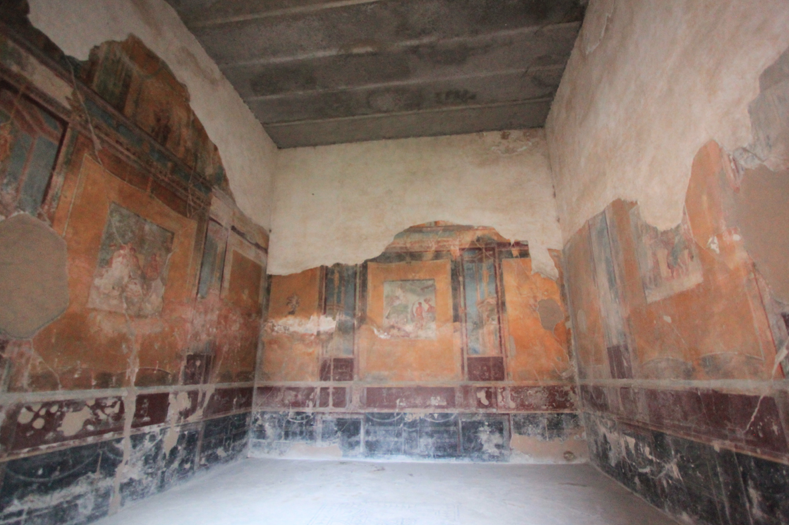 Another slightly unnerving sight that we’ve all seen in our middle school text books were the plaster casts of bodies in the position that they died in when the pyroclastic flow wiped out Pompeii. When archaeologists uncovered these empty cavities underneath the ash, they filled them with plaster before lifting them out, basically leaving an exact impression of that person at their moment of death. We only got to see two, but I’ve heard that some are so well preserved and detailed you can actually make out the wrinkles in their clothing and see the fur on a dog. 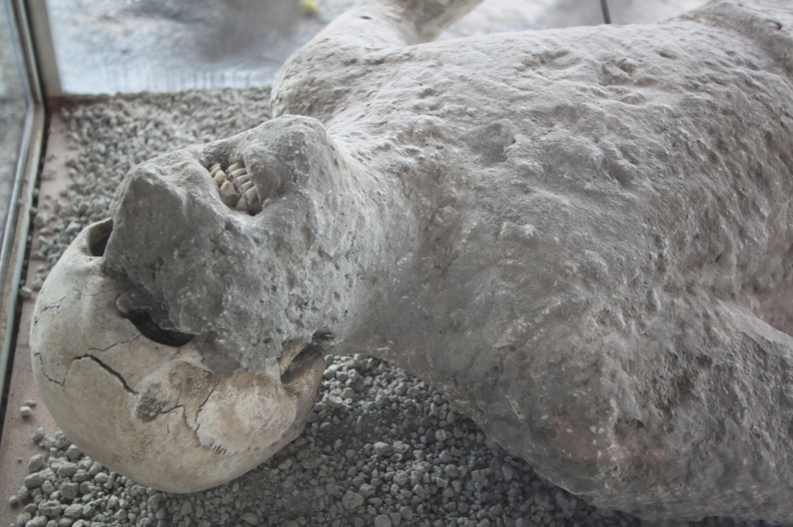 Every day the Romans would flood the streets to clean them, using stepping stones to create a crossway so they wouldn’t get their feet wet. Plus they were spaced perfectly for carriages to pass through. I don’t know why I found this so interesting, but I did. And I suddenly wished all streets in New York had these. 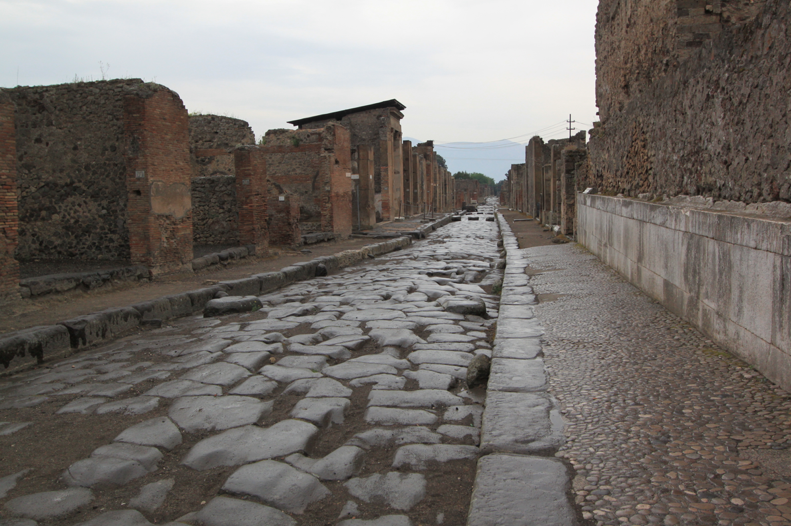 On the last stop of the tour our guide warned women and children who might be offended not to go in, so naturally I found myself paying attention to this jerkwad again. We were headed for the brothels. And how did we know that? Because of the stone penis on the ground pointing in the direction of their “red light district.” 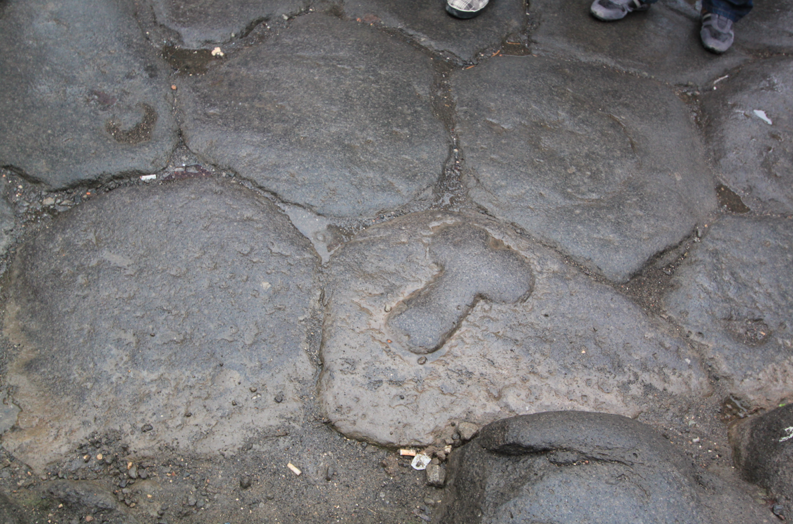 There were a series of rooms (with the most uncomfortable looking beds) reserved strictly for adult fun. I couldn’t help but wonder if anyone had been in these rooms when they died, and if so, where were their plaster casts? 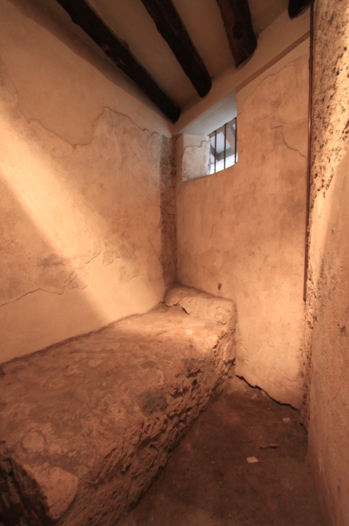 There were paintings on the wall illustrating the different sex acts someone could walk in and order up. You know, kind of like a Baskin-Robbins. But with sex. 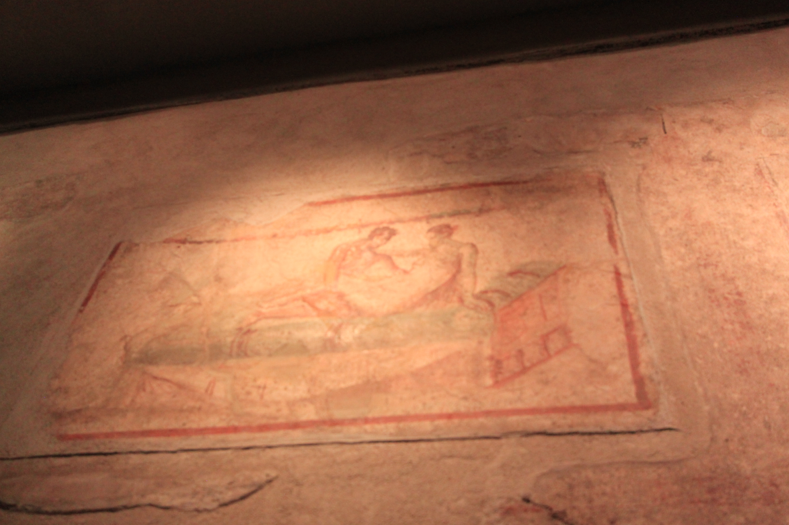 And here’s my pervy prostitute “come hither” look. I’m pretty sure I would’ve made a killing back in the day with my creeper glare. 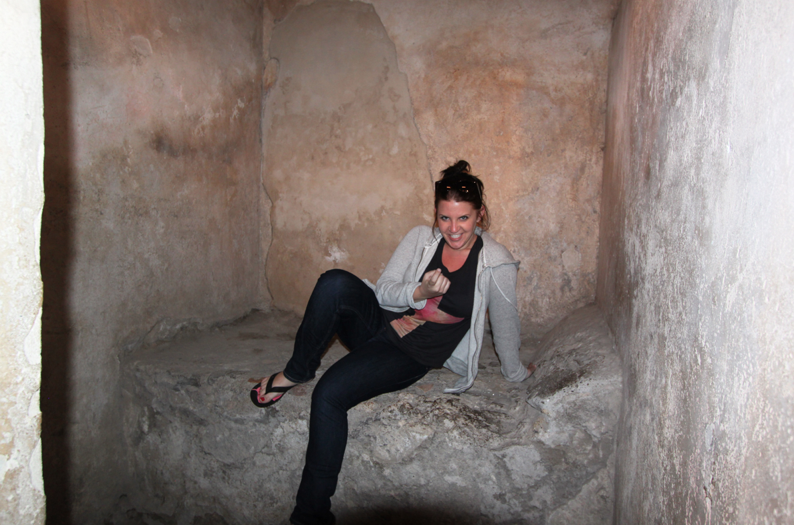 SHOULD YOU VISIT POMPEII?

Yes! We only spent two hours at Pompeii, and while our tour was extremely rushed, it was a good way to see the highlights and learn a bit about the places we were looking at. I think a long tour with a very small group would be perfect. If I did it again I’d definitely spend at least an entire day wandering Pompeii on my own, picking up overheard information from all of the tour groups rushing around. Then I’d hike up to the top of Mount Vesuvius the next day.

I’ve heard that Italy is struggling to keep up with the preservation of the site, but I can only hope they find the funding to do so. Pompeii was a great experience and totally surreal, and I’d definitely visit again if I had the chance. I’d say it was actually my favorite part of Italy that I’ve visited. Plus admission is very reasonable (about 11 Euros, or $15 USD) and definitely worth every bit of it.

My Date with a French Man in the Capital of Romance