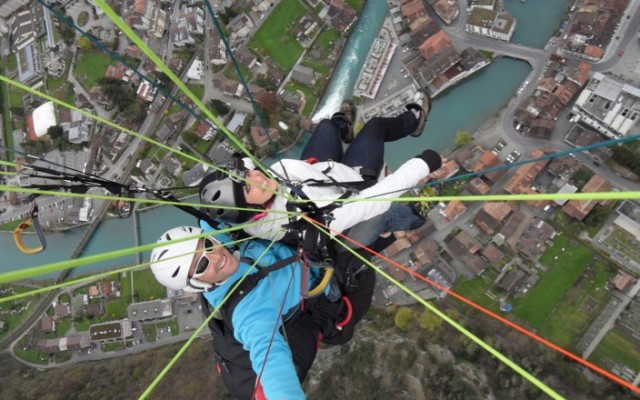 Okay. I’m going to have one last “poor me moment” about that time I flew all the way to Zurich and took a train to Interlaken with the sole intention of skydiving over the Alps, but was unable to do so when Mother Nature decided I wasn’t worthy of such fun. There, done. Now I can tell you all about how I tried to make up for it by paragliding.

On my last afternoon there, I walked into Balmers and started whining to the chick at the front desk about how I needed some excitement because I certainly couldn’t afford to sit around and eat in Interlaken (seriously my last ditch effort to save money by eating at McDonald’s cost me about $34). Since it was already pushing noon, the only option I really had was paragliding. It sounded promising, so I jumped in a car with an older, silent man before being dumped off at the wide open landing field a few blocks away. I was a little confused, but I followed some random guy whose accent I could barely understand, and before long I was quickly rushed into an unmarked van along with a few other confused Swedish and Chinese tourists, lead by four jacked-up European men.

Our van zig-zagged up the mountain, the green grass disappearing and the snow and cloudy haze getting thicker. I changed out of my mesh running shoes and strapped on some heavy hiking boots that, based on the warm, sweaty insides, someone else had just taken off. They dumped us off to walk the rest of the way uphill which is where I realized how pathetic my body was. I desperately tried to hide my heavy breathing while trekking up the slippery incline in my oversized boots. All the while my tandem gliding partner was walking full speed like he was in the mall walking olympics and holding conversation without missing a beat, even with his gigantic loveseat-sized pack strapped to his back.

After we set up and laid out our canopies, we waited. And waited. There was a stick in the ground with a red and white ribbon blowing in the nearly nonexistent breeze. Apparently this was their way of determining which way the wind was blowing and how hard so that we didn’t float off the edge of the cliff and right into the side of another. 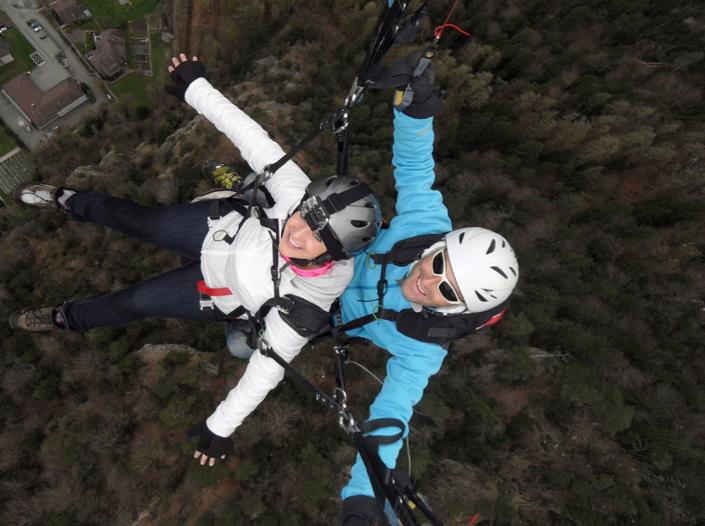 After I got bored of standing around playing guessing games as to when we’d finally make a run for it, my tandem gliding buddy hooked himself onto me and got all intense again.

“Now this is the important part. We have to go at exactly the right moment, or else it could be bad. So when I say run, you run, got it? And I don’t mean just a light jog or a brisk walk, you run faster than you’ve ever run in your entire life until we take off from the ground. K?”

I didn’t know if he completely missed seeing that I was only 5’2″ or what, but here I was with a grown ass man strapped to my back along with what felt like a small sofa attached to him, wearing clunky man boots that were about three sizes too big, and this guy wants me to run down a slippery, icy hill without falling on my face. Right.

We continued to wait. And wait. Then out of nowhere we heard “baaaaa!” Right in our running path a herd of sheep had broken through a hole in the fence and started making their way uphill curiously towards us. At first it was cute watching them dig in the snow to try and eat the grass below, but all of a sudden baby sheep were running all over the fucking place. The guides were nearly pissing themselves with laughter, saying this has never happened before as they started baaaing back at them. But that only attracted the sheep more and they continued to make their way up towards us. And they were hungry. Finally one of the guys had to unhook himself and run down to scare them off. But of course this was also the exact moment the wind changed directions and I was told to run, NOW.

I ran like Usain Bolt. Actually no, I pitter-pattered down the hill rather pathetically until a gust of wind grabbed ahold and threw me down in the snow. Just as quickly that same gust lifted us up slightly, dragging my legs long enough to scoop up two boots full of snow, then launched us off the cliff.

It wasn’t even a windy day but the guide kept saying that due to our “excellent running speed takeoff” (hell yeah, way to go little legs!) we were able to get more speed than most people. I got a well deserved pat on the back.

At first it was pretty cool when you suddenly realize that you’re floating and gliding through the air. But then it became oddly comfortable and a little…boring. The wind was chilly, drying out my lips and making my eyes water, and the view didn’t really change much during the whole 15 minute flight. Plus it was much more secure feeling than I thought it would be. I wanted to feel like I was falling or flying, something comparable to what I’d imagine skydiving would be like. But instead I felt safe, in a heavy box propelling through the sky almost with as much control as if there were an engine. And the whole dude on my back thing wasn’t a particularly liberating experience.

So while it was definitely awesome and I’d definitely do it again in a heartbeat, I had the same problem with paragliding as I do with most things I do. It left me wanting to go faster and higher, and I wanted to do it alone. I felt like a brat, but I asked my instructor guy to go a little crazy, so he started spiraling us closer to Earth towards the end.

Enough of my babbling, I’ll let this little video montage do the job. But beware, the last few seconds can be a bit dizzying!

(PS click through the link below the video to watch it in HD.)

12 Lessons on How to Survive in the Wild

Last weekend I went upstate to Saugerties, NY for a wilderness survival workshop with about 25 complete strangers. Sounds like...
Continue Reading