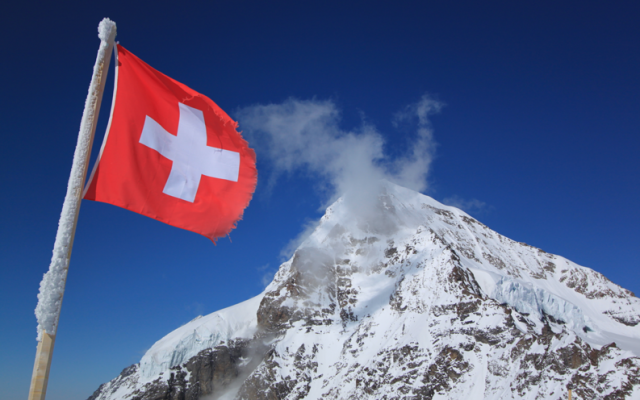 Skydiving has been at the top of my to-do list for the past few years. But in true chick form, I want my first time to be special. I don’t want to pop my free-fall cherry over some boring flatlands. I want to plunge towards the Earth over a landscape that even Bob Ross couldn’t paint. That way if my chute doesn’t open, at least I’ll die with an awesome view. So at the end of my London living experience I flew down to Switzerland with the sole intention of jumping out of an airplane and gracefully falling back to Earth over the Alps. Since April was technically spring I wasn’t too worried about the weather, but knowing how I somehow always end up visiting places during historically wet times, I gave myself three full days in Interlaken to ensure at least one of those days was nice enough to jump.

It never happened. In fact, the mountains never even came out from the damn clouds the entire time I was there. I was getting frustrated. After all the city hopping I’d been doing around Europe I needed some sort of a rush. About the only adrenaline pumping activity that wasn’t shut down was paragliding (post and video coming soon!) which was entertaining and gave me a great view, but it was nowhere near as exhilarating and piss-your-pants awesome as what I’d imagine skydiving would be. So on my last day there, fed up from the months of grey skies, I decided to head above the clouds to Jungfraujoch.

Also marketed to tourists like me as “The Top of Europe,” Jungfraujoch is a mountain pass between the Mönch and the Jungfrau in the Bernese Alps. The journey to the top takes about 2.5 hours via three trains. But like all other Swiss trains I encountered, they operate seamlessly. We set off into the green mountains, seeing waterfalls, rivers, and the most adorable little homes I’ve ever seen under grey skies. 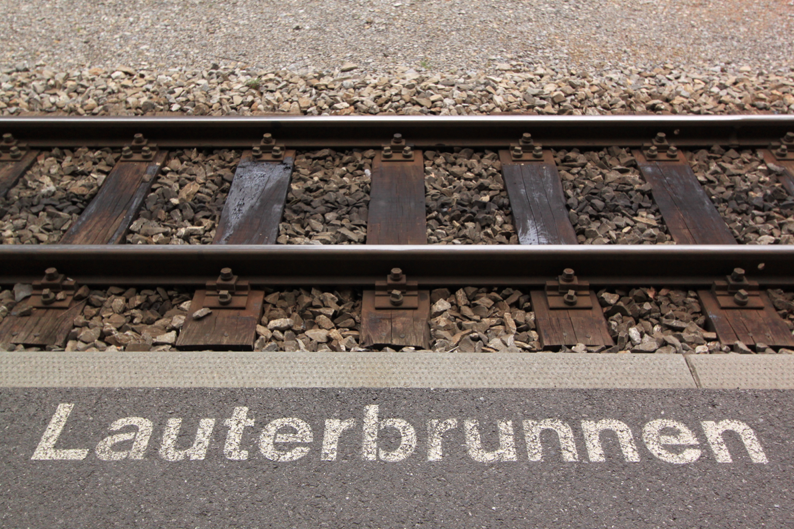 Boarding the train at Lauterbrunnen 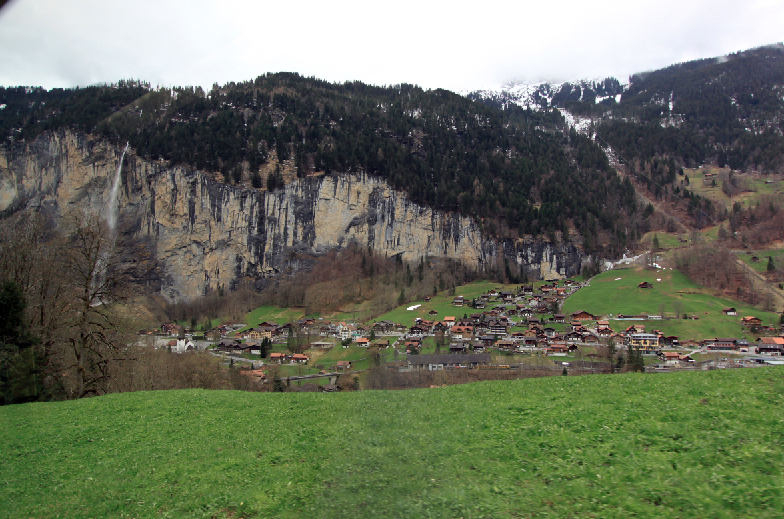 I could totally live here 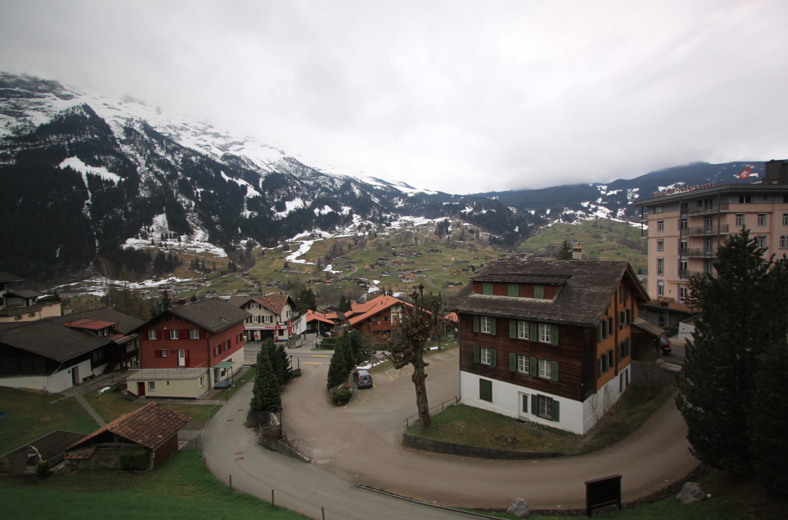 The higher we got, the more snow started to fall and accumulate, and before long the ground was covered in about two feet of snow. But the train continued chugging uphill. At some points it was impossible to see out the window, and the final leg on the Jungfrau Railway was almost entirely enclosed in a tunnel. We made a five minute stop at a glass-enclosed lookout point, completely oblivious to what we were going to be able to see. I quickly ran off the train and looked out the window to see that we’d finally made it above the clouds, but not by much. There were snowy mountain peaks beginning to emerge, but still blending into the layer of clouds. 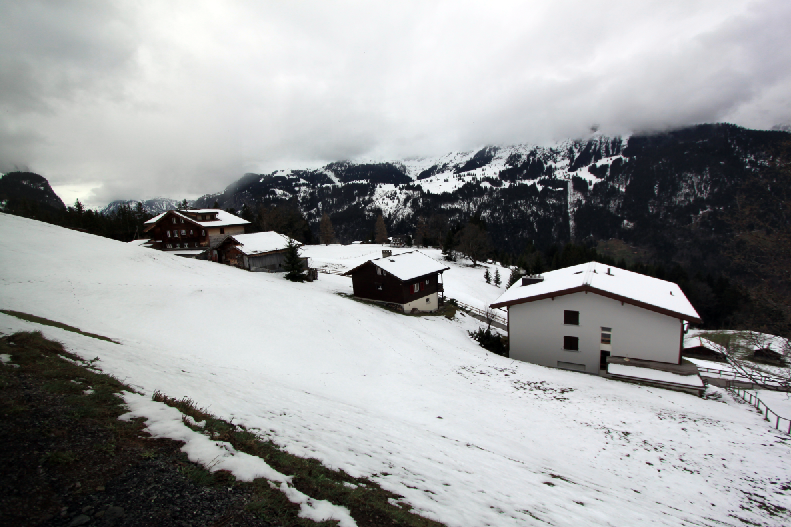 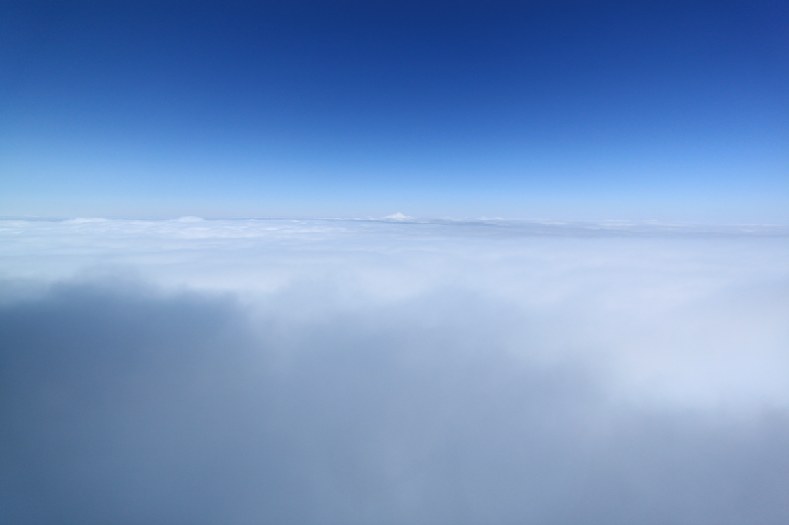 The view from the first train stop on the Jungfrau Railway, barely breaking through the clouds 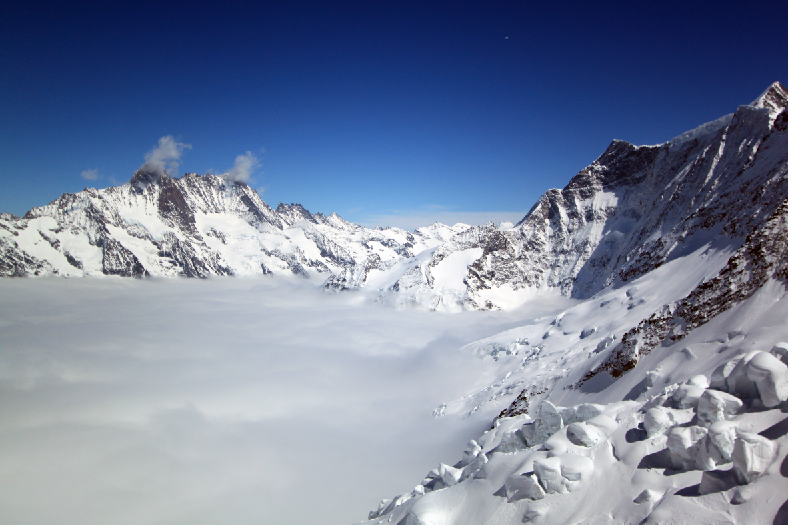 Jungfraujoch is 3,471 m (11,388ft) above sea level which is apparently just enough altitude change to fuck with me. Shortly after I stepped off the train I could tell it was more difficult than usual to breathe. I felt kind of winded, and since my chest was feeling heavy it was proving impossible to catch my breath. (I blame it on the fact that my doctor told me I had slight asthma when I was younger but I chose not to do anything about it.) But since it was hardly enough to be annoying I continued on, rushing through the inside tour so I could spend maximum time snapping pics before the last train down. 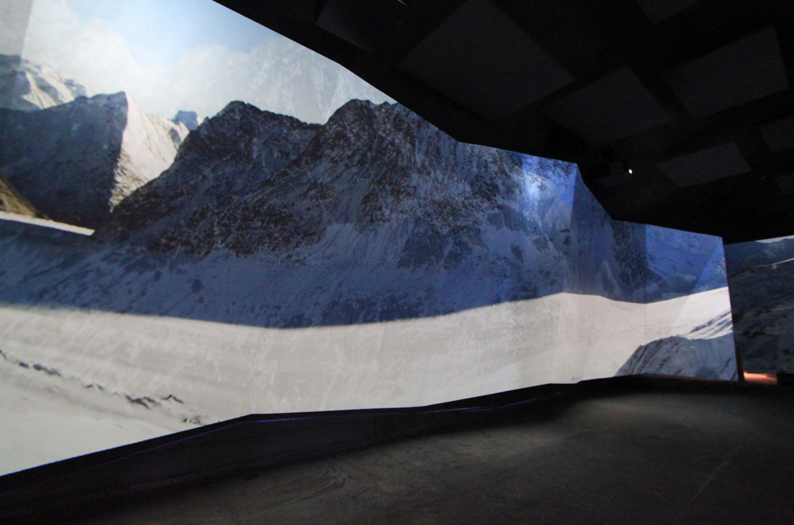 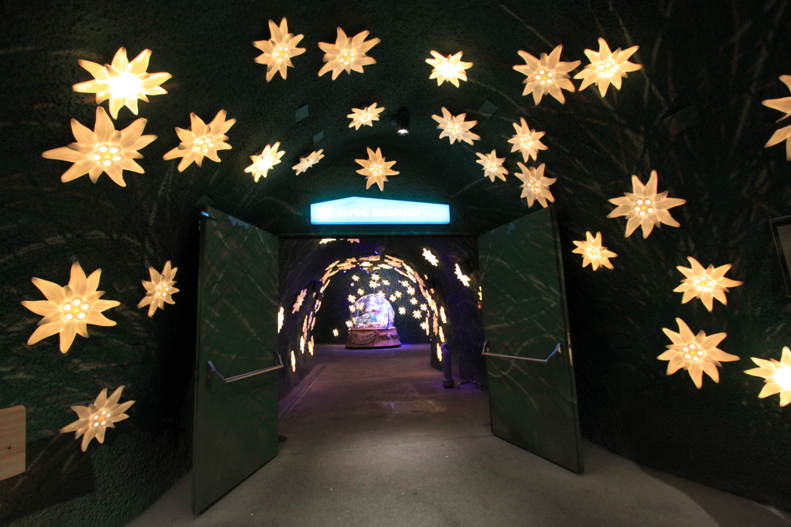 Welcome to your brain on drugs 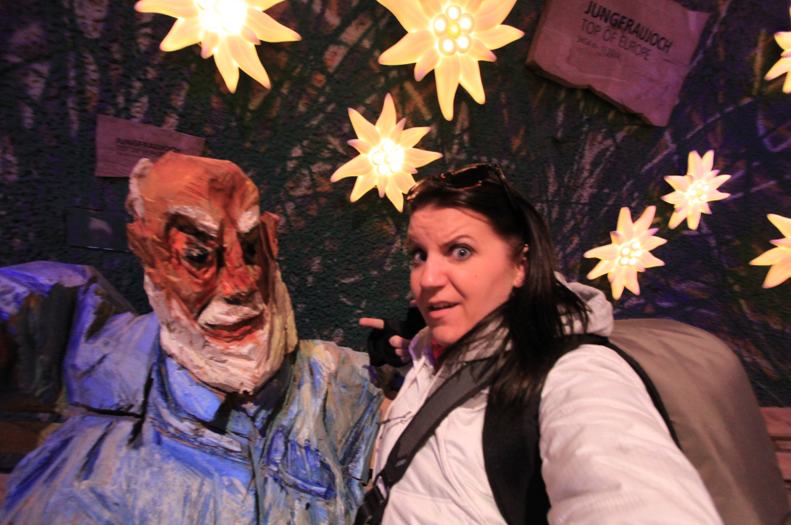 The walk took me past all sorts of history, paintings, and videos of the area, but probably the coolest part was the Ice Palace of sculptures and tunnels that look like they’d be a hell of a lot of fun with a bobsled. 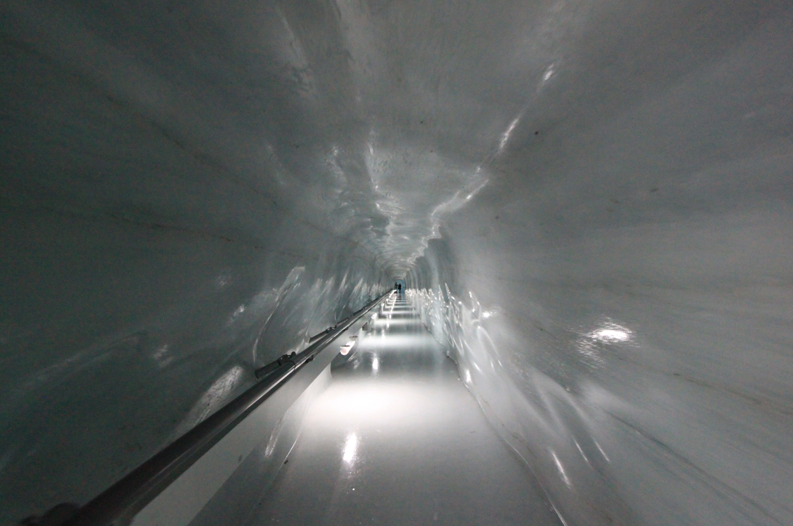 Tunnel leading into the Ice Palace 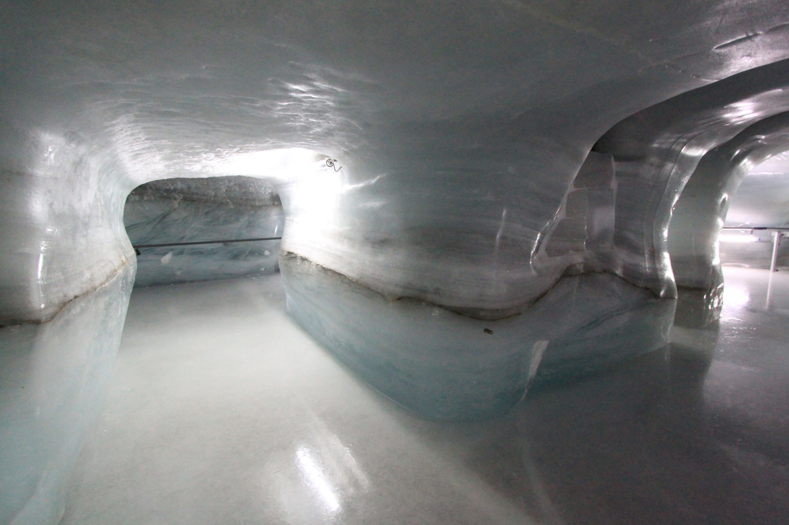 The floor wasn’t as slick as it looked, even when you ran and slid across it. That or my shoes just had excellent traction. 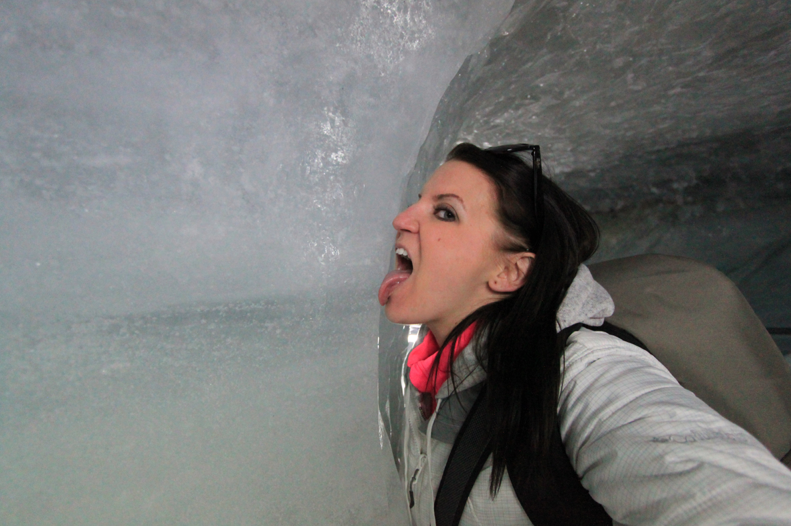 I like to lick things. And I was kind of tempted to see if my tongue would get stuck. It didn’t. 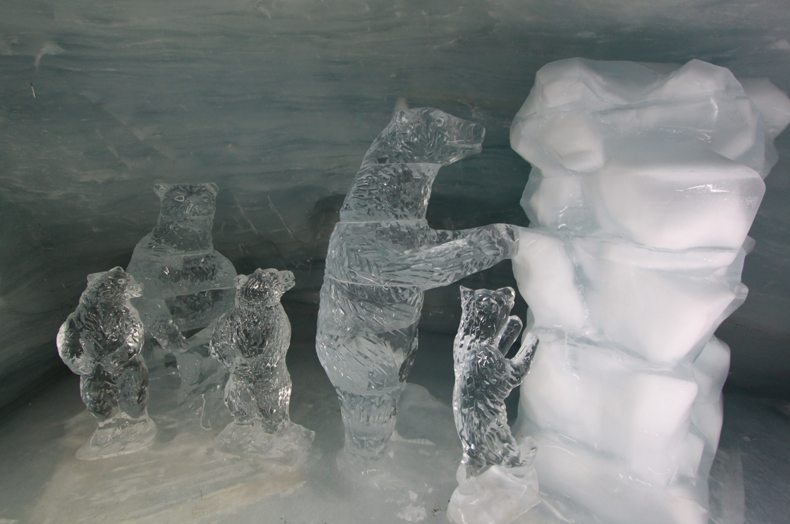 Too bad these guys were barred off, I would’ve licked them too.

Then finally I take an elevator up to the Sphinx Observatory, strapped my GoPro on my head and made my way outside to see the blue skies and snowy mountain peaks that made the journey totally worth it. 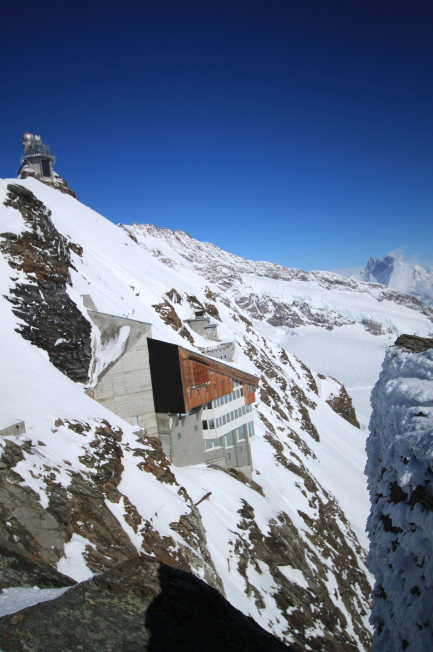 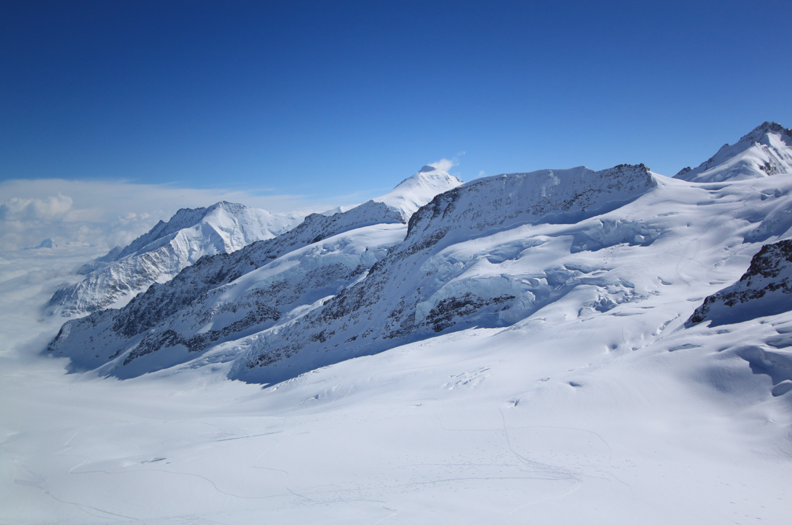 The mountains seemed much smaller coming out of the Aletsch Glacier 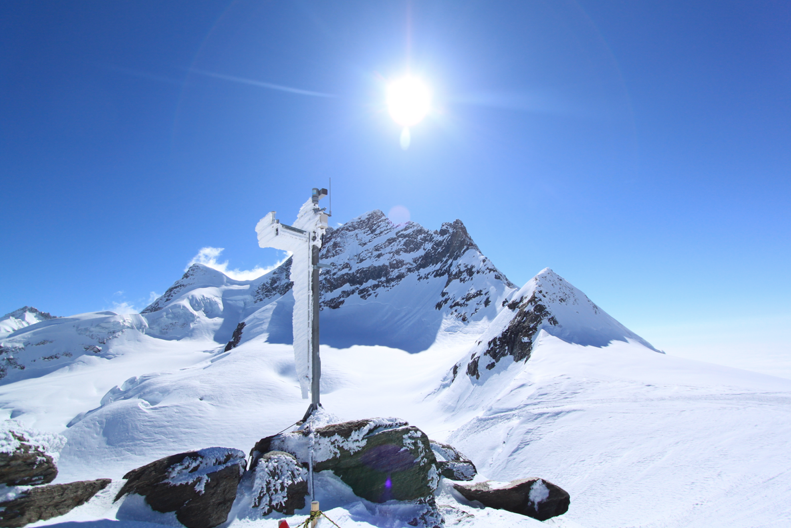 No clouds up here! 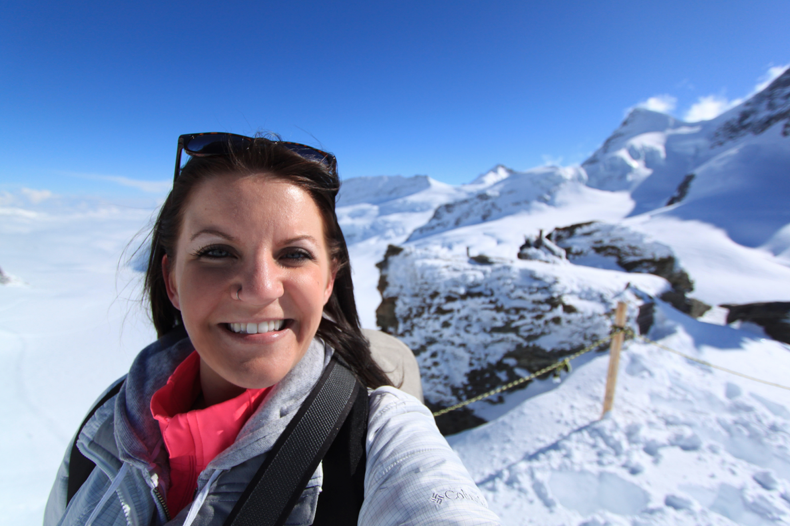 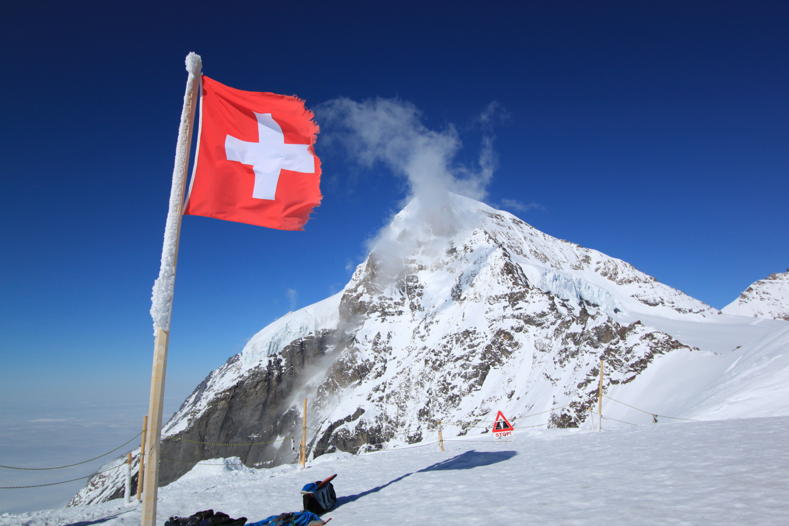 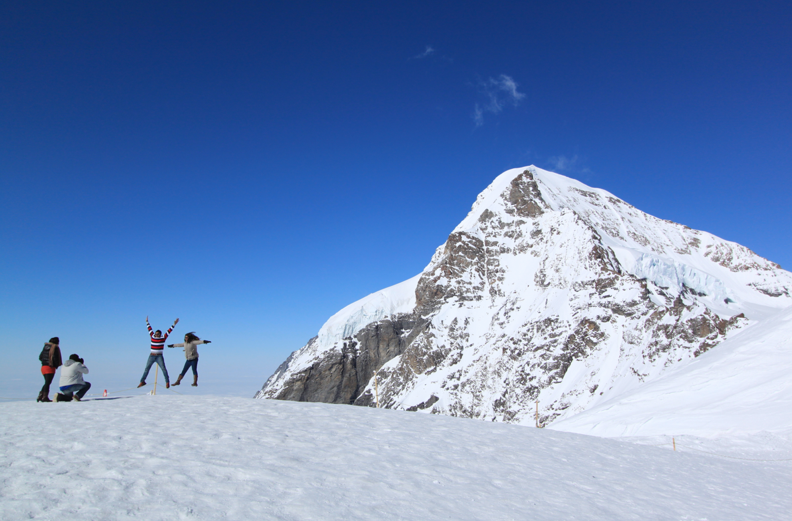 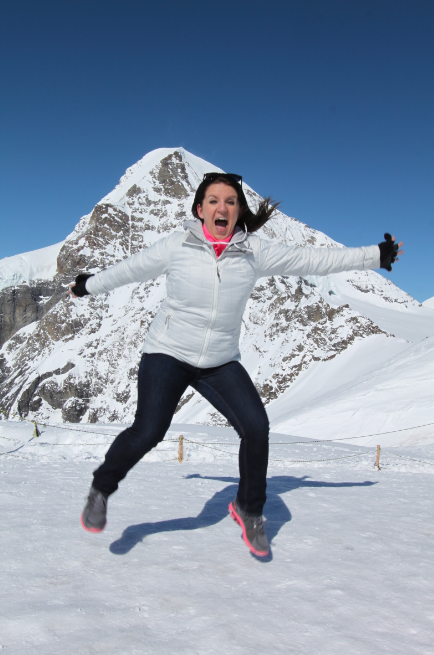 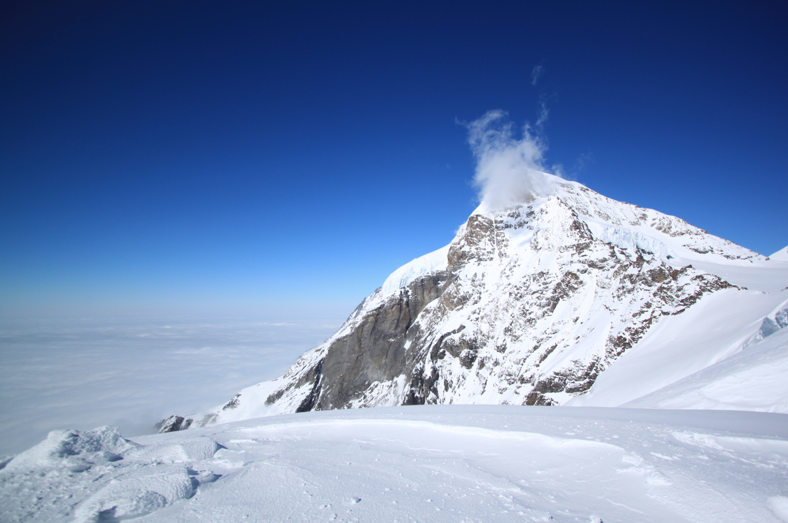 I saw my first mini avalanche from the top of Jungfraujoch

Meh. It was definitely cool to see the kind of view that usually only hardcore climbers get to see. But then again you don’t get that same sense of accomplishment when you’re at the top because you just sat on your ass for two and a half hours to see it.

But you’ll see three awesome peaks of the Bernese Alps (Eiger, Mönch and Jungfrau), as well as the Aletsch Glacier which is the largest glacier in the Alps. So that’s cool.

BUT IT IS NOT CHEAP. I didn’t have a Swiss Pass of any kind and I paid $214.35 for the RT train fare. Had I not budgeted $600 for my skydiving experience I would’ve never paid that. Either way, for that price I would’ve liked to have some more of an activity as opposed to sitting on a train for five hours total. You know, like base jumping back down to the ground below.

If you do decide to go, ask the staff at the train station to check their webcams beforehand to make sure the weather up there is okay. And maybe even look into a glacier hike if you’re interested—there seem to be some options if you plan ahead.

There’s a reason Interlaken is known for its extreme sports. And if the weather abides, then most certainly I think your time would be better spent experiencing those. But if you get stuck with shit weather like I did and have an extra couple of hundred dollars to spend, then sure, it’s worth the trek.

Oh, and by the way, the day I left Switzerland there wasn’t a cloud in the sky. Go figure.

Snowmobiling During a Blizzard on Langjökull Glacier

Despite my gigantor size list of things to see in Iceland, I figured I'd wait to see what my friends...
Continue Reading