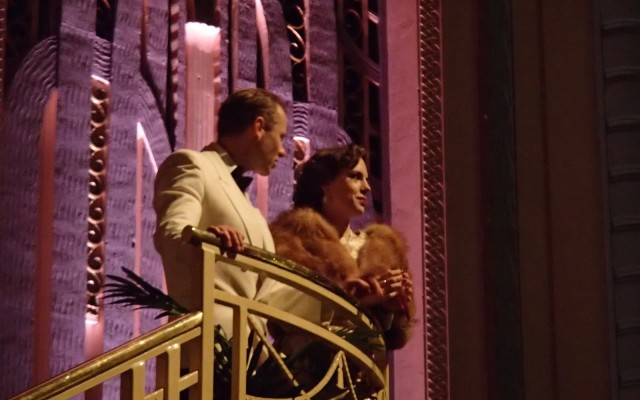 London isn’t exactly the most adventurous place to visit or live. Sure you could always shit-talk some drunken die-hard Chelsea fans and try to dodge punches, or test your luck at jumping in the Thames to see what happens to your limbs. But what about when you want to do something without the fear of being severely disfigured?

How about a night at the movies? Sounds boring doesn’t it? And while we’re at it, why not a black and white film from 1942? Are you sleeping yet? Yeah, my thoughts exactly, BORING. That is, until I found out it was a Future Cinema production. If there’s any way to turn an ordinary movie experience into a fun, action-packed evening, Future Cinema is it.

Simply put, Future Cinema is live cinema. They don’t just play the film. They create a theatrical world around the film that fully immerses you into an environment that makes you feel like you’re in the movie. So we bought tickets and went to see Casablanca. Though I’d never seen the film beforehand, that didn’t ruin my experience (but I bet it would’ve been 10x cooler if I knew what was going on).

Our experience started before we even got to the venue, and I honestly felt like I left that place in the middle of World War II. Our confirmation emails gave us a passport along with a name, nationality, and directions on how to dress to get into the show. 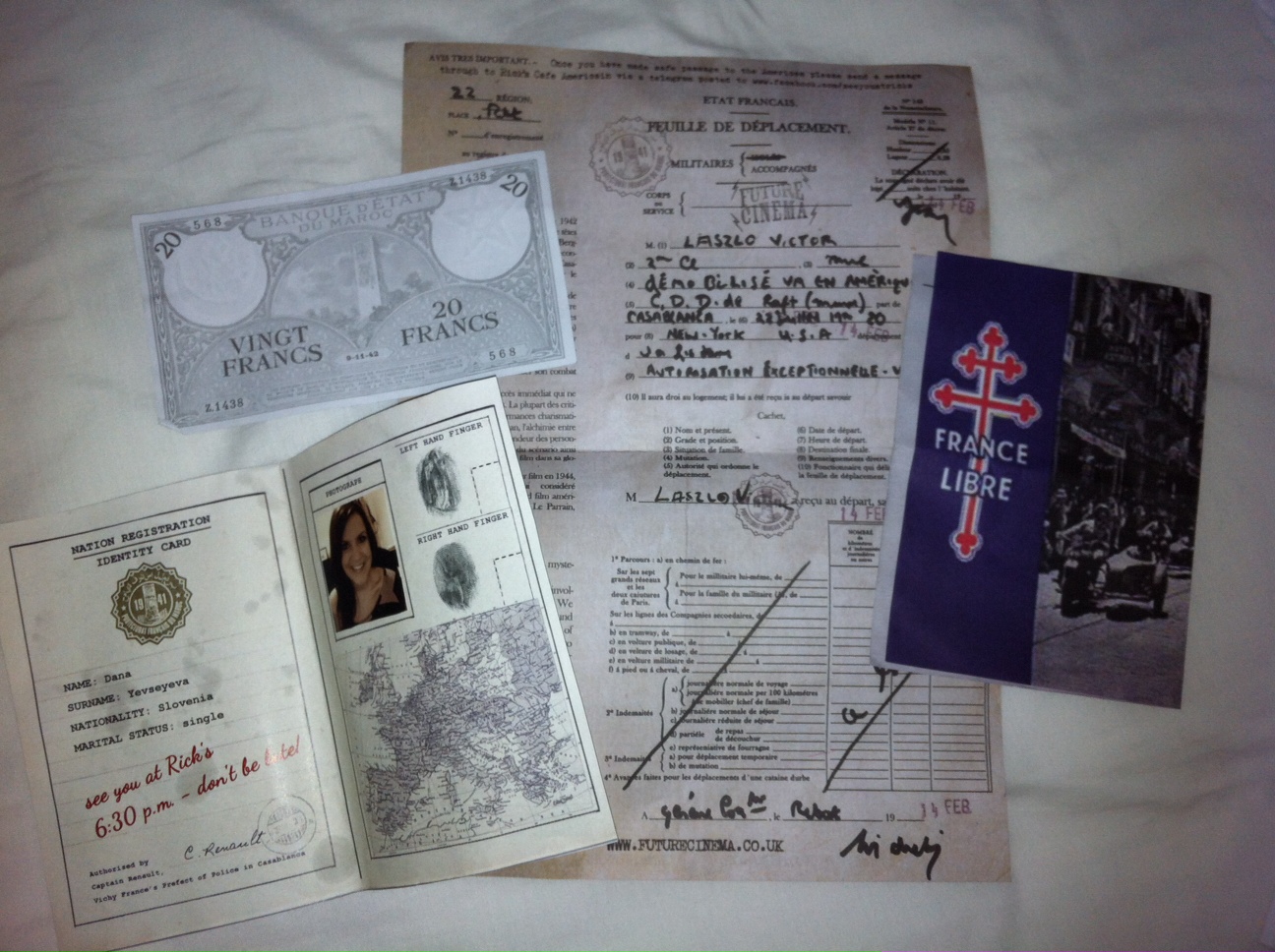 My passport, exit papers, Francs, and literature on France

I was Dana Yevseyeva from Slovenia. And my email told me to wear the sign of the snake, learn the Marseillaise song if I believe in a Free France, and bring jewels to barter with on the black market to secure an exit visa to America. I had no idea what to expect.

The Troxy was decked out as Rick’s Café Américain as we entered in through the Caroline Street entrance, a dark side street that was crowded with an audience dressed head-to-toe in 1940′s era clothing. The actors were spot on. About a block away we were accosted by what we believe were prostitutes. The policemen were so intimidating I’m actually not convinced that they weren’t actual policemen. While we were in line, these stone-faced guards picked men from the line to push against the wall, screaming “I said put your hands on the wall, what are you stupid?” When they grabbed our papers the interrogation and sweating began (I don’t do well during confrontation). We were scolded for mispronouncing our names, and teased because we didn’t look Slovenian. I felt like I was in an unwelcoming foreign country doing something illegal and I needed to hide my American-ness for fear of being exiled or murdered. 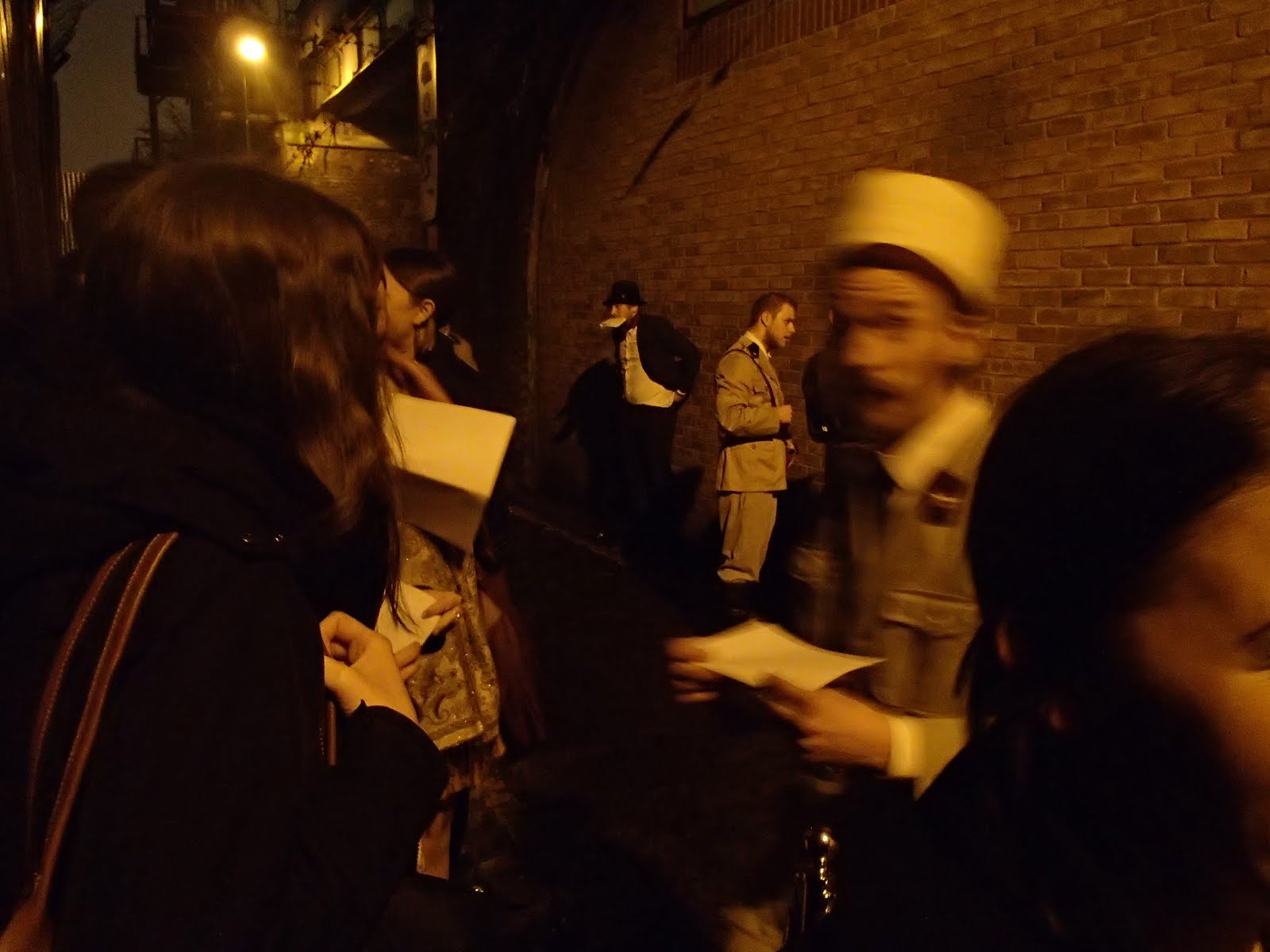 The policemen were so intimidating that we were scared to take photos. This is what happened.

We walked inside and made our way through halls and stairways of potted plants before reaching the grand room that smelled of Moroccan food thanks to Moro. London-based French musician Benoit Viellefon and his Orchestra welcomed guest singers on stage while the dancers moved to the rhythm in their sequined bodysuits. 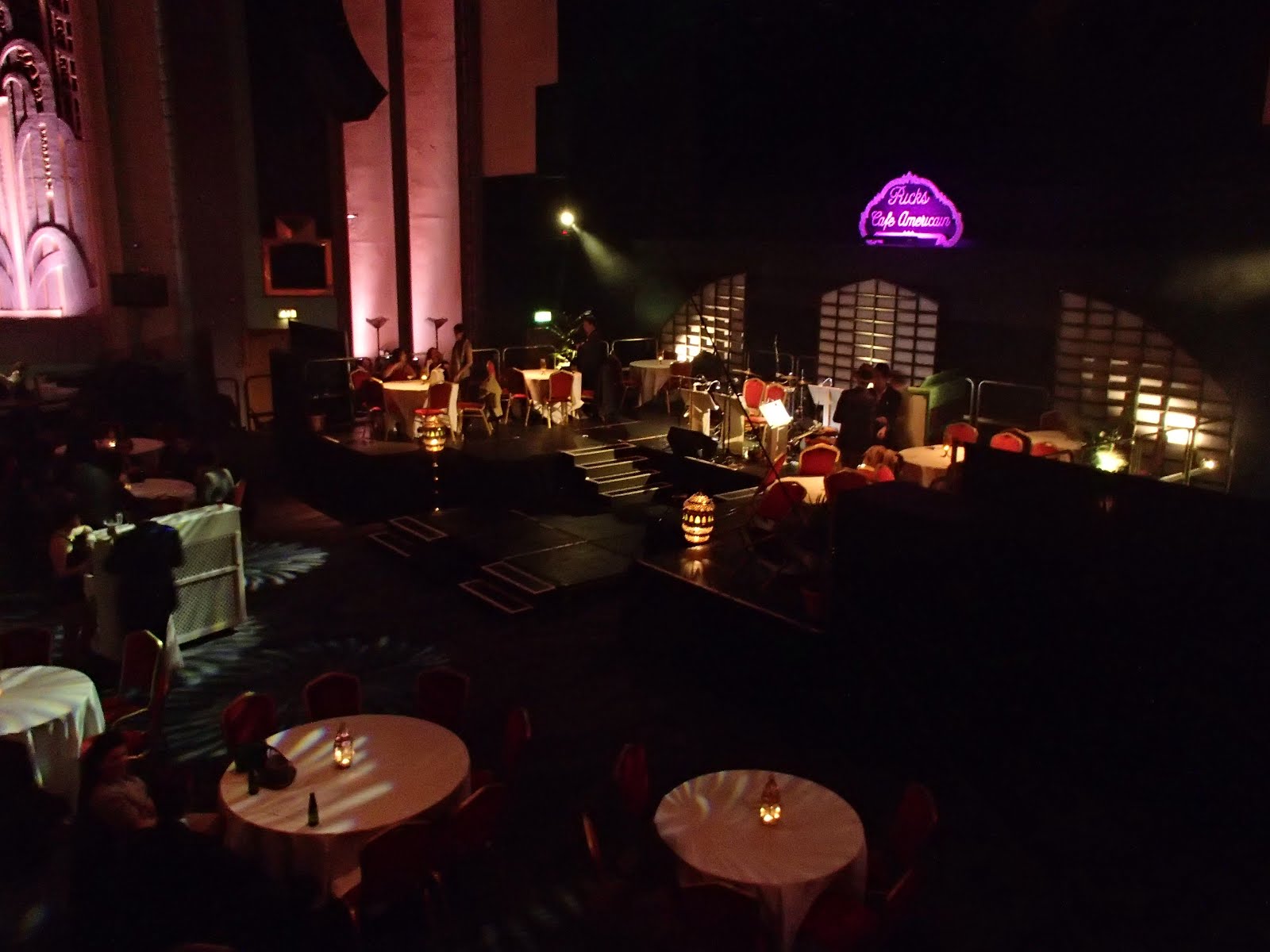 Part of the stage setup

The lovely overpriced cocktail menu that I fell victim to 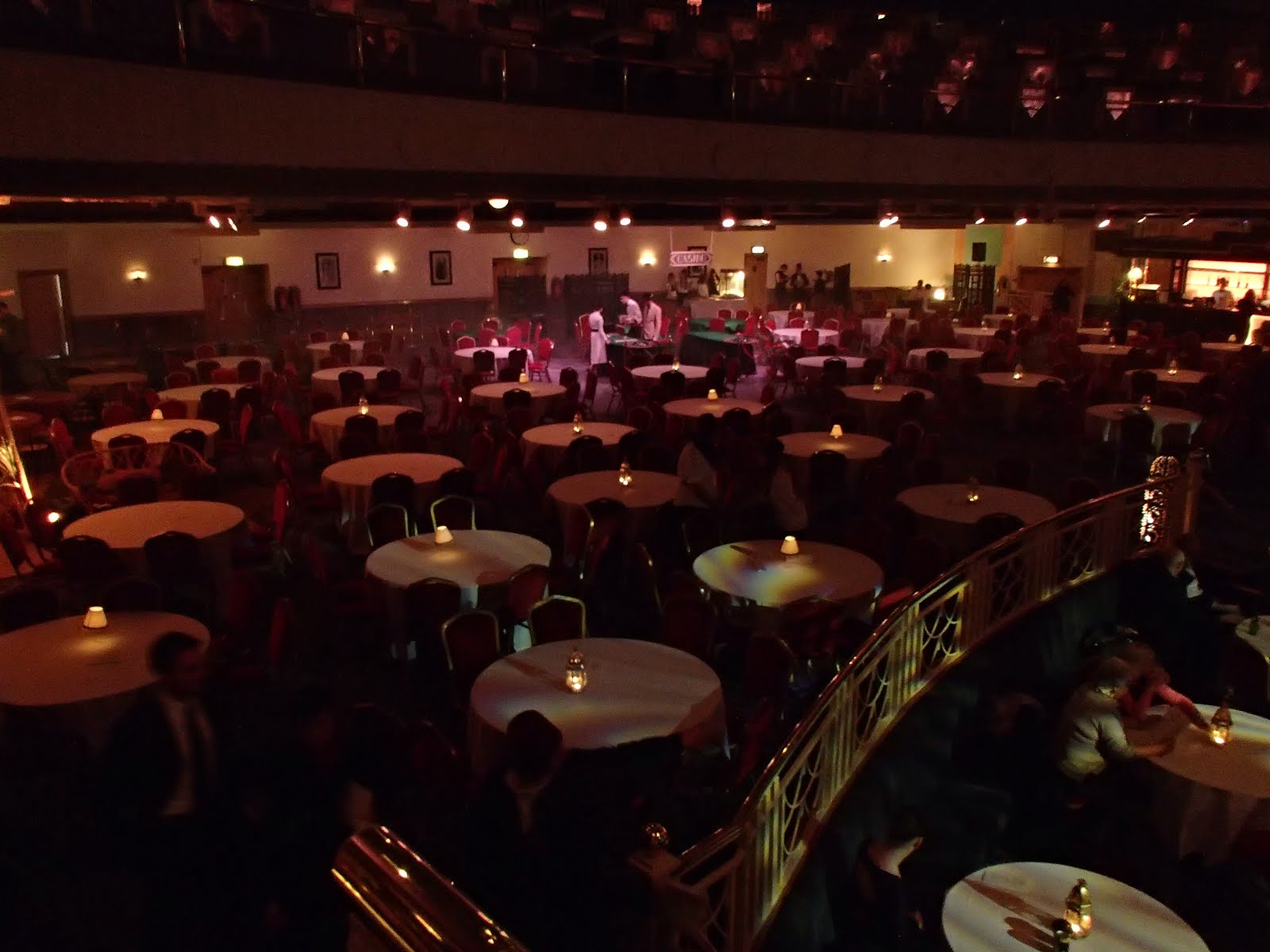 As we made our way towards our seats it became difficult to figure out who was in character and who was another theater-goer looking to start up a conversation. I was taking notes on my cell phone when a woman came up to me in a frenzy, warning me that “the Nazis can intercept everything, so you should be very careful when using communication devices.” After she thoroughly confused me with her political French talk, an attractive French man came up and started flirting with me, which kind of sucked because only in a world of make believe did an attractive French man ever hit on me. It’s hard to respond when you know the person hitting on you is only doing so because it’s his job (is this how men feel at strip clubs? I’m gonna go with probably not). What’s even more weird is that he started acting like he knew my character, saying things like “are you good at gambling? You used to be,” before giving me 20 (fake) Francs to gamble with. 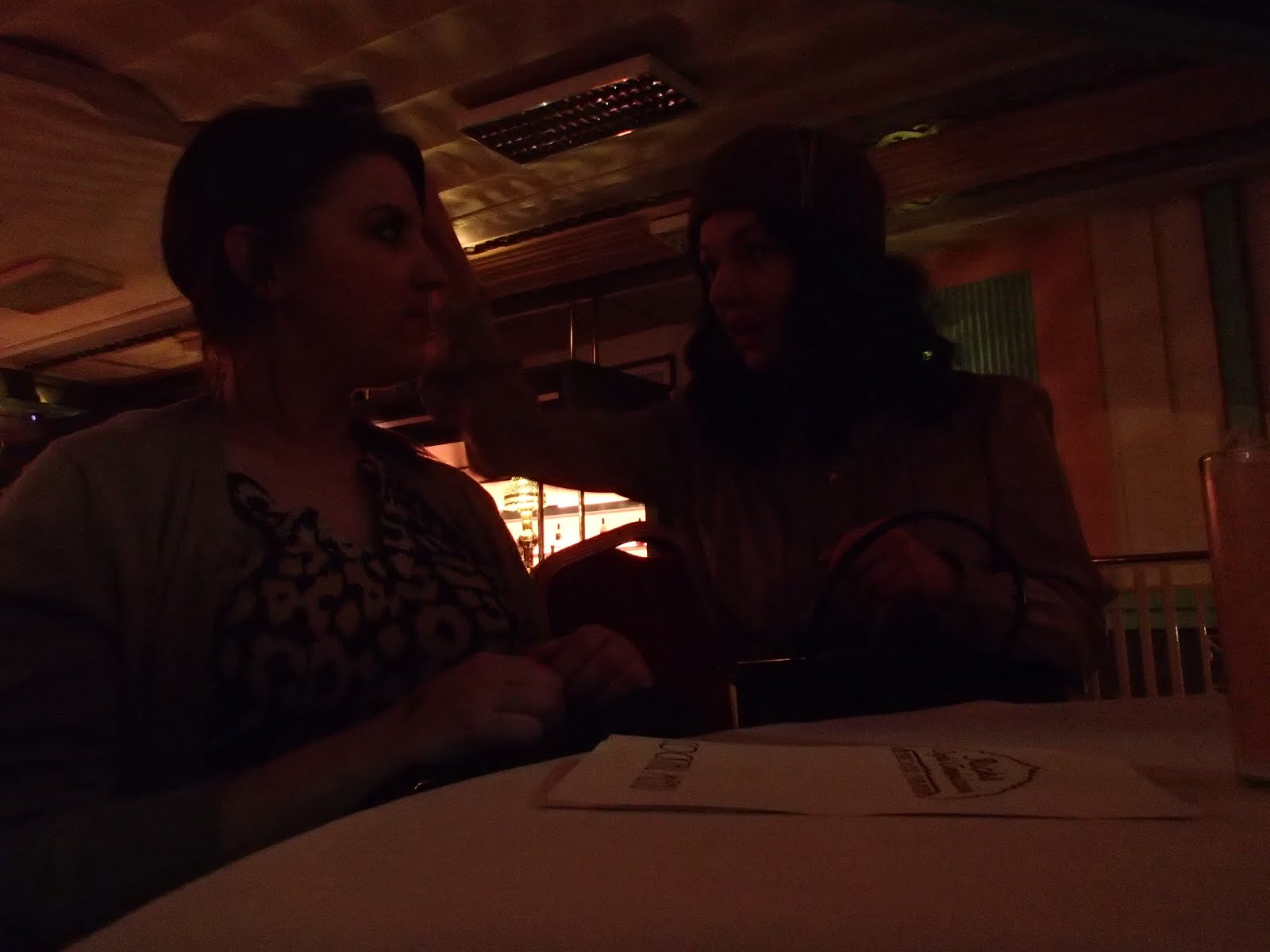 Hard to see, but Marcus coyly took this photo while I try to figure out if this chick is an actress or spectator. 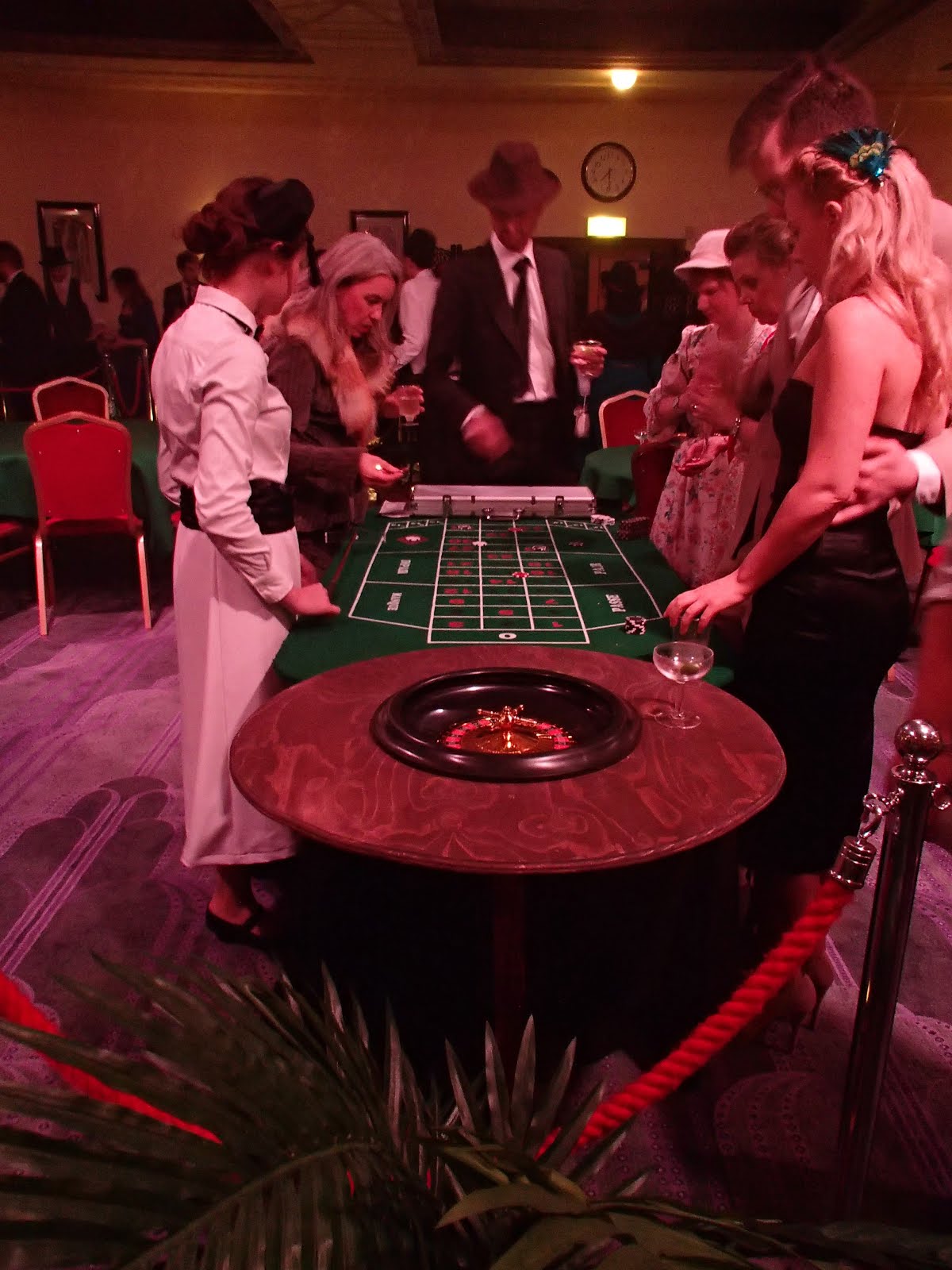 The roulette table in the back, where security only allowed certain people to play. 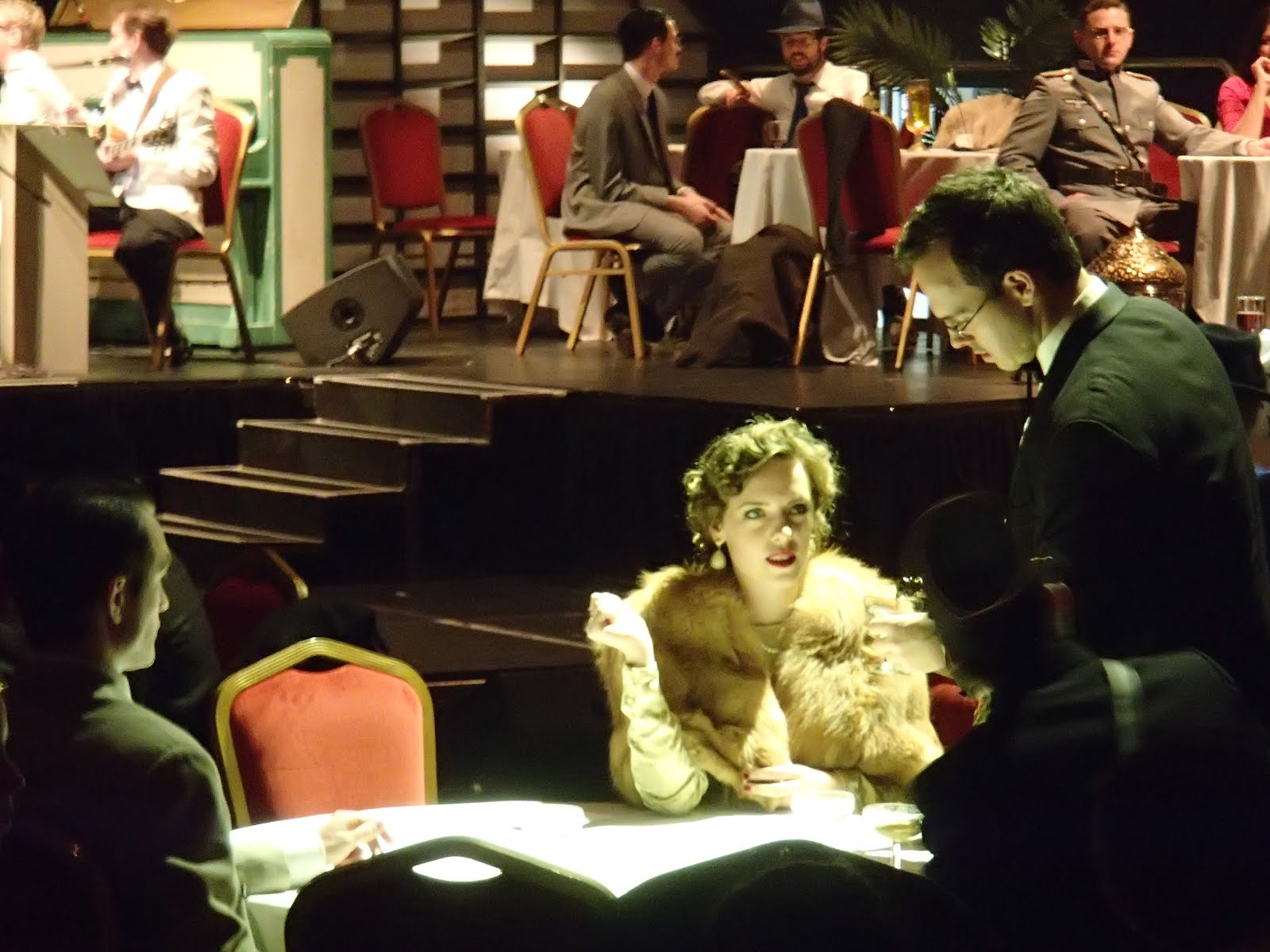 The actress dressed as Ilsa from Casablanca, dining amongst the rest of us. 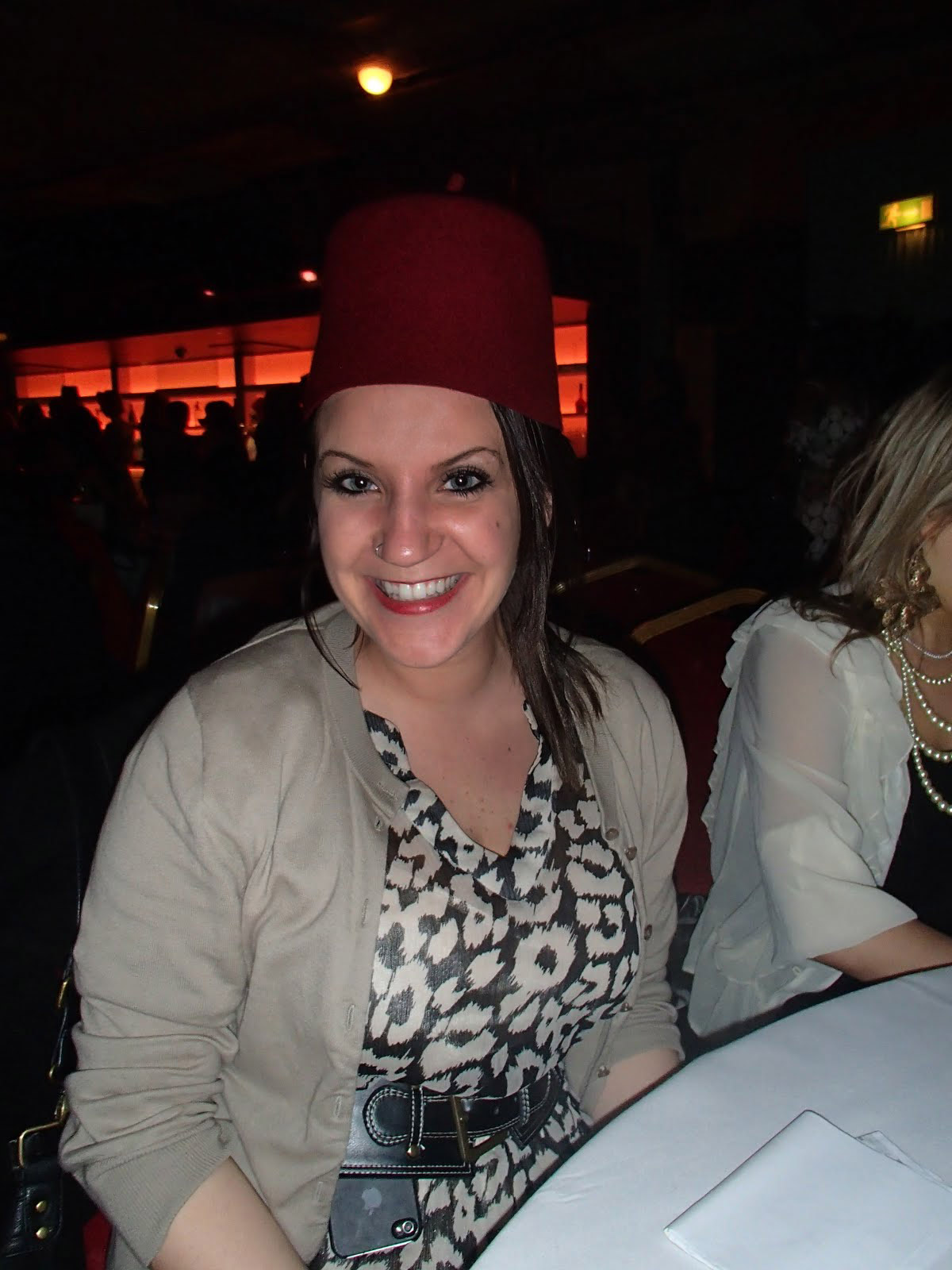 One of the girls with us stole this fez from a security guard. And yes, I know I’m not very 1940′s-ish. Especially with my iPhone falling out of my belt.

In the couple of hours leading up to showtime we were seated about eight to a round table, enjoying our drinks while checking out all of the dapper men in suits, when all of a sudden a shout or loud noise would grab our attention and a short scene would unfold. One time it was even [SPOILER ALERT]… gunshots.

I wasn’t going to buy into the overpriced food, but those gunshots jumpstarted my appetite (okay maybe it was the two overpriced Moscow Mules), so I needed some food in me. This salad surprisingly did the trick thanks to that huge hunk of creamy brie and the warm flakey bread. 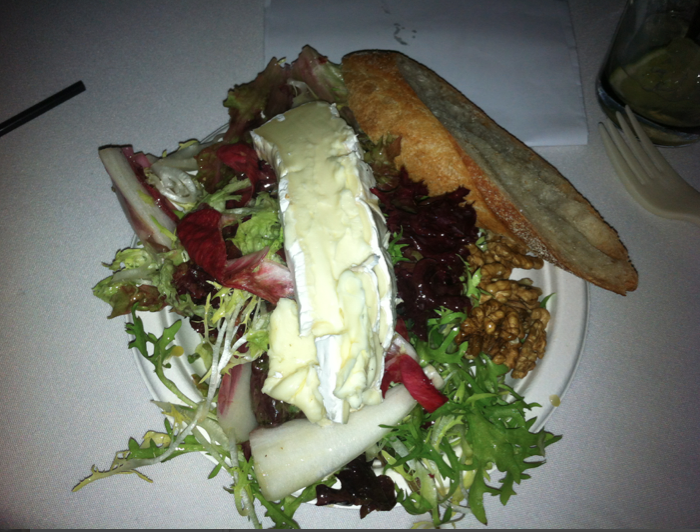 At this point in the evening, though I’d never seen the film I had a pretty good idea of what it was about. Then the smaller than expected screen (to be fair I think I was expecting IMAX) dropped down, the film began, and the experience did a total 180. The sound system was not that great so it was hard to hear the dialogue over the crunching popcorn and cocktails being shaken, (not stirred). People were now drunk and giggling and talking. Or maybe that was just the brown-bagging alcoholics I was sitting next to.

Overall, Future Cinema did an excellent job of making me feel like it was 1941. I walked out of that place still convinced there was a war going on. Plus I actually sat down to watch a film I probably wouldn’t normally watch, so I finally understood the 4,981 “Here’s looking at you, kid” and “of all the gin joints in all the towns in all the world, she walks into mine” references that have gone completely over my head for the past 27 years.

Yes, absolutely. It’s £25, or roughly $38, but if you’re looking for a different London experience Future Cinema is definitely it. Just plan on making an evening of it. Drinks and food cost extra so bring some money, and plan on staying after the film for some more dancing. Dress up, act the part, and transport yourself into the movie. The only regret I have is that I didn’t get more into character, but I didn’t exactly include 1940′s style clothing in my luggage when I packed.

Casablanca ended on March 23rd, but next up is Saturday Night Fever from June 15th – July 9th. If you want to bump up the excitement a little more, check out Secret Cinema. It’s basically the same thing except you don’t know what movie you’re going to. I didn’t get a chance to see it but I hear it’s incredible, just check out this awesome video for the Secret Cinema production of The Shawshank Redemption.