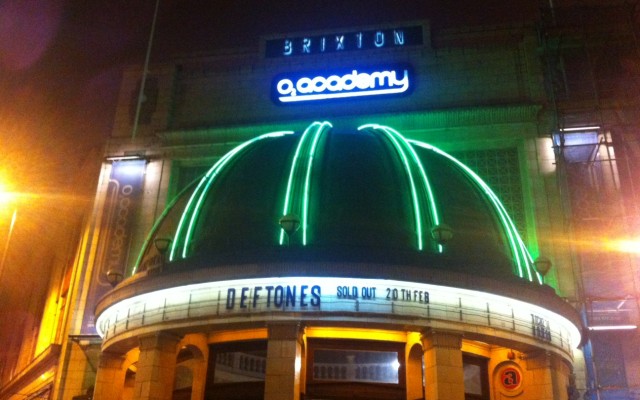 This past weekend the rock world lost an incredible musician, bass player Chi Cheng from the Deftones. When I woke up on Sunday and reached for my phone to scroll through my Facebook feed, that’s when I saw “Chino Moreno: Rest in Peace Chi Cheng,” and my heart broke a little. So, in Chi’s honor, I thought it only appropriate to finish a post that I’ve been putting off for nearly two months. Originally this post was more about the comfort that comes when you experience the familiar in an unfamiliar country. But in light of Chi’s passing, I’m gonna switch it up a bit with some reminiscing. 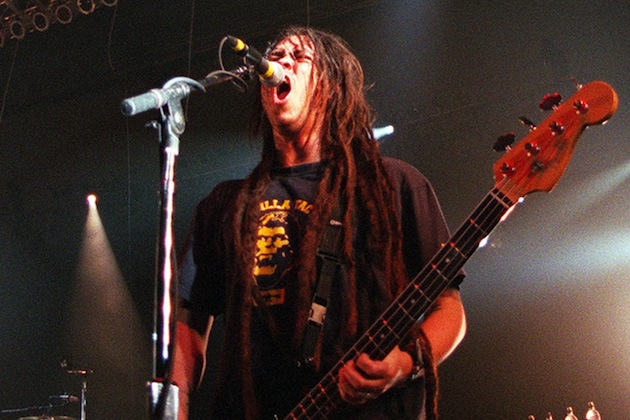 Deftones formed in 1988 when I was just three years old. In 1997 Around the Fur came out and moved its way right to the top of my all-time favorite albums list. And there it has remained, for more than half of my life. But Chi hasn’t played with the band in years, since a car accident in 2008 left him in a coma. Since then he’s been making progress slowly, going into a semi-conscious state where he was able to acknowledge commands and speak a few words. But for whatever reason his body decided the fight had lasted long enough and surrendered. 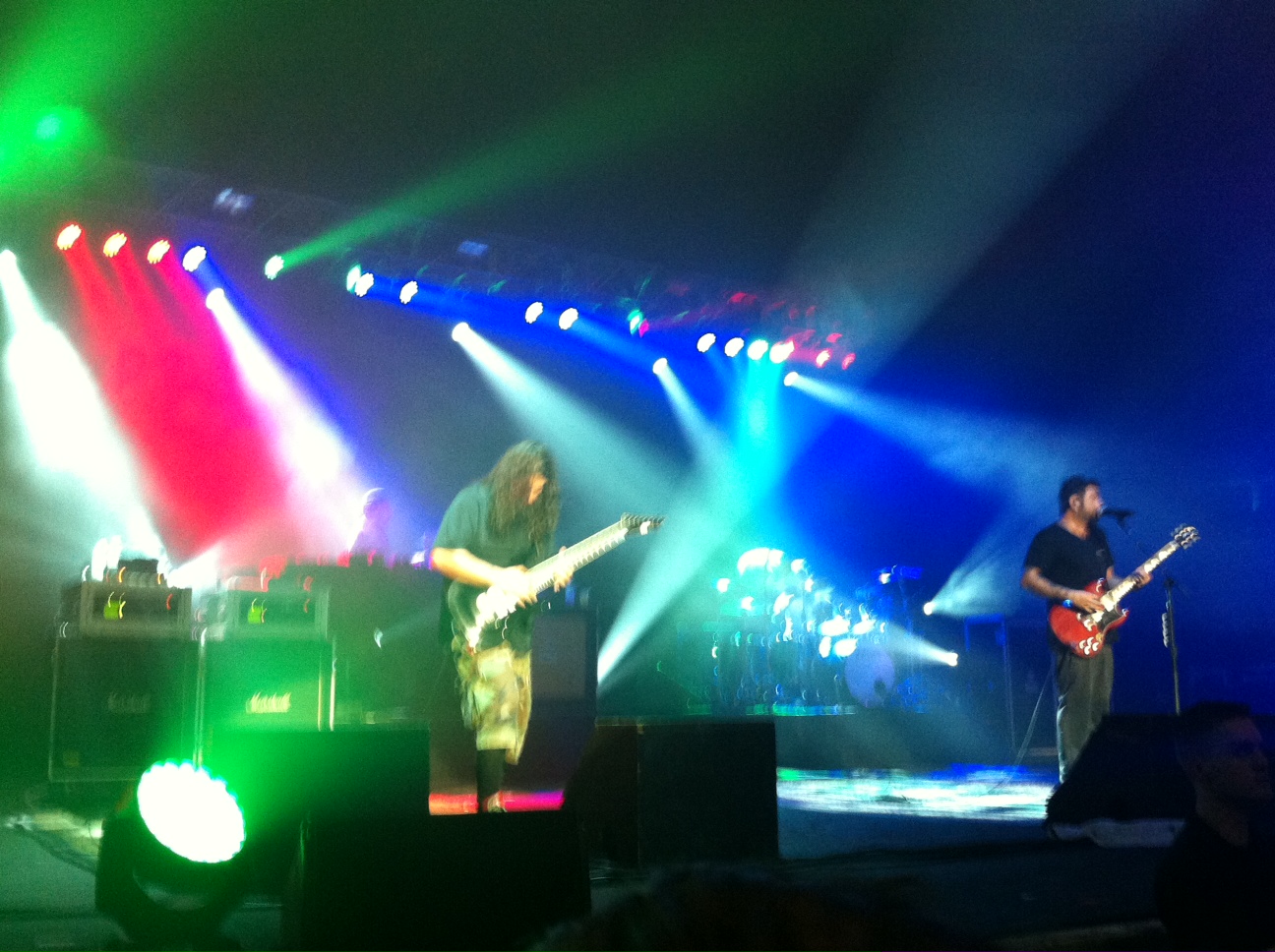 After the accident the band continued to tour and make albums with Sergio Vega on bass, and fans have continued to support Chi through OneLoveForChi.com. And over those years [and before] I’ve seen the Deftones more times than I can even remember. Unfortunately any photos I have from the days of Chi are stashed under my bed back in New York alongside other disposable-camera snaps. But I’ll never forget the way his snake-like dreads whirled around stage as I crowdsurfed my way towards them. Or the way his screams on Headup bellowed and his bass thumped while I was being enthusiastically battered in the pit.

Let’s take a quick detour down memory lane to my best Deftones experience yet. In November 2000 they were playing a show at Cobo Arena in Detroit. I was 15, without a driver’s license and still about three months shy of getting my first job. But I was determined to go, so I rollerbladed to the store with $90 in pennies from my “college fund” in my backpack to buy tickets the second they went on sale. I got a ticket for me and my brother who agreed to drive if I bought him one. A few days later I was also Caller X on a radio contest and won two more tickets, plus I was entered to win backstage passes (which I didn’t win). As if that weren’t enough tickets, a friend of mine randomly got four more free and gave them to me since she knew I was a fan. All in all, on the day of the show I had 8 tickets total for myself, my then-boyfriend, my brother, and five of his friends. 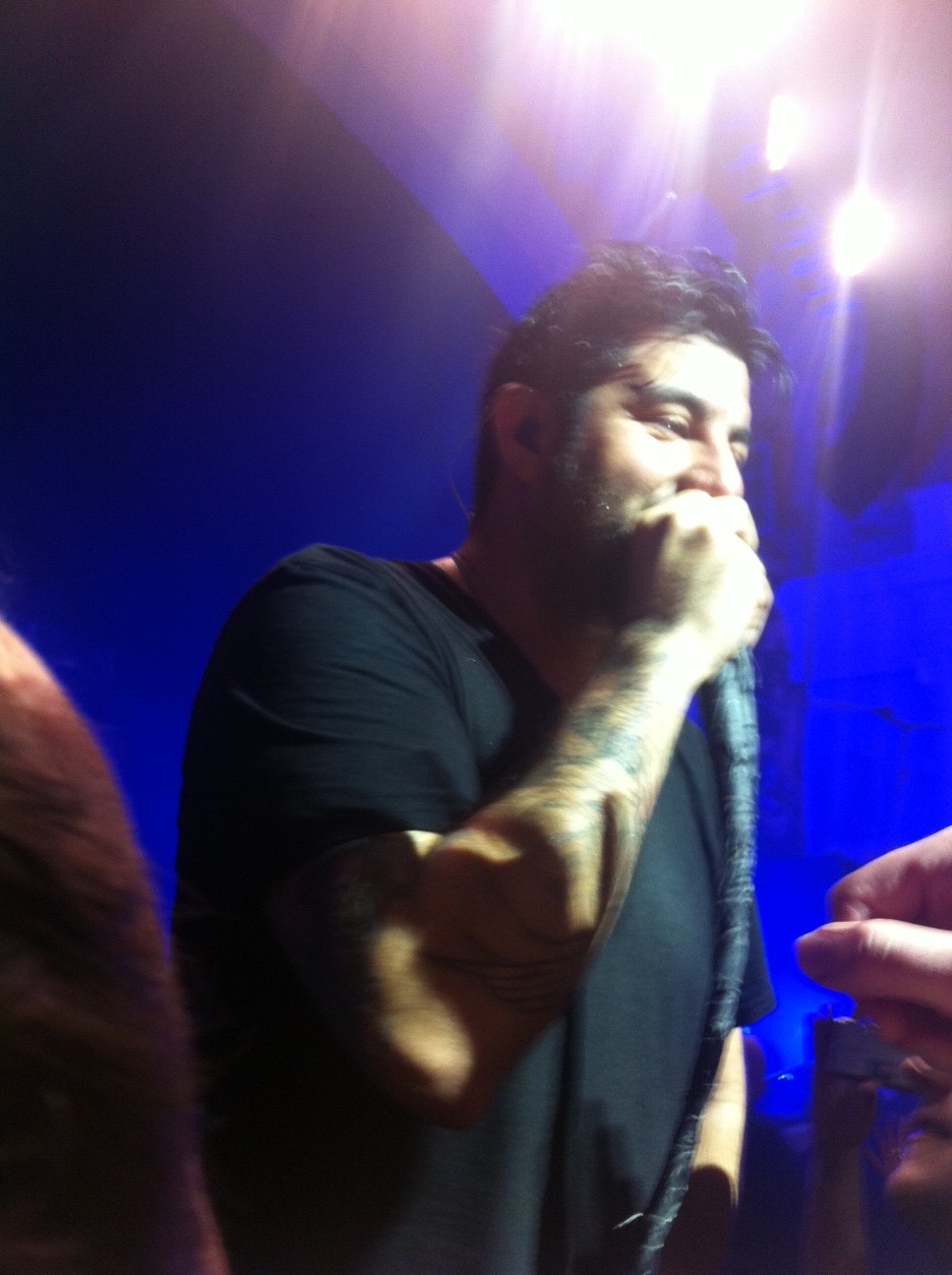 Chino at the London show

At the end of the show, the guy who’d been sitting behind me tapped me on the shoulder and asked if I wanted to meet the band for $20. I thought it seemed kind of like a rape-and-murder scenario, but after I saw the name on the envelope was the same name as the radio caller who’d won the backstage tickets, I knew I had to come up with $20 stat. So as the show was letting out I ran faster than I’ve ever ran in my entire life to the other side of the massive arena in search of my brother and his friends, figuring I could get $20 off one of them since I got them all in for free. By the time I made it back the guy was gone. I frantically searched the entire section before spotting him in the walkway, mid-transaction with someone else. I may or may not have thrown a tantrum while shoving the $20 in his face and grabbing the envelope, but regardless, starstruck, naive, 15-year-old me went backstage.

Let me just state the obvious here. Chino has always made me feel like a little schoolgirl with a major boy band crush. I mean googley-eyed, butterflies in the tummy, mumbling my words and probably drooling all over myself whenever he’s in sight. So Abe, Frank, and Stef entered the room and made their way down our single file line as I shook their hands and got autographs. But I was too shy to speak. Then in walked Chino and Chi and suddenly I was too giddy to speak. So I hugged them both, making it a point to touch Chi’s dreads. And Chino’s ass. 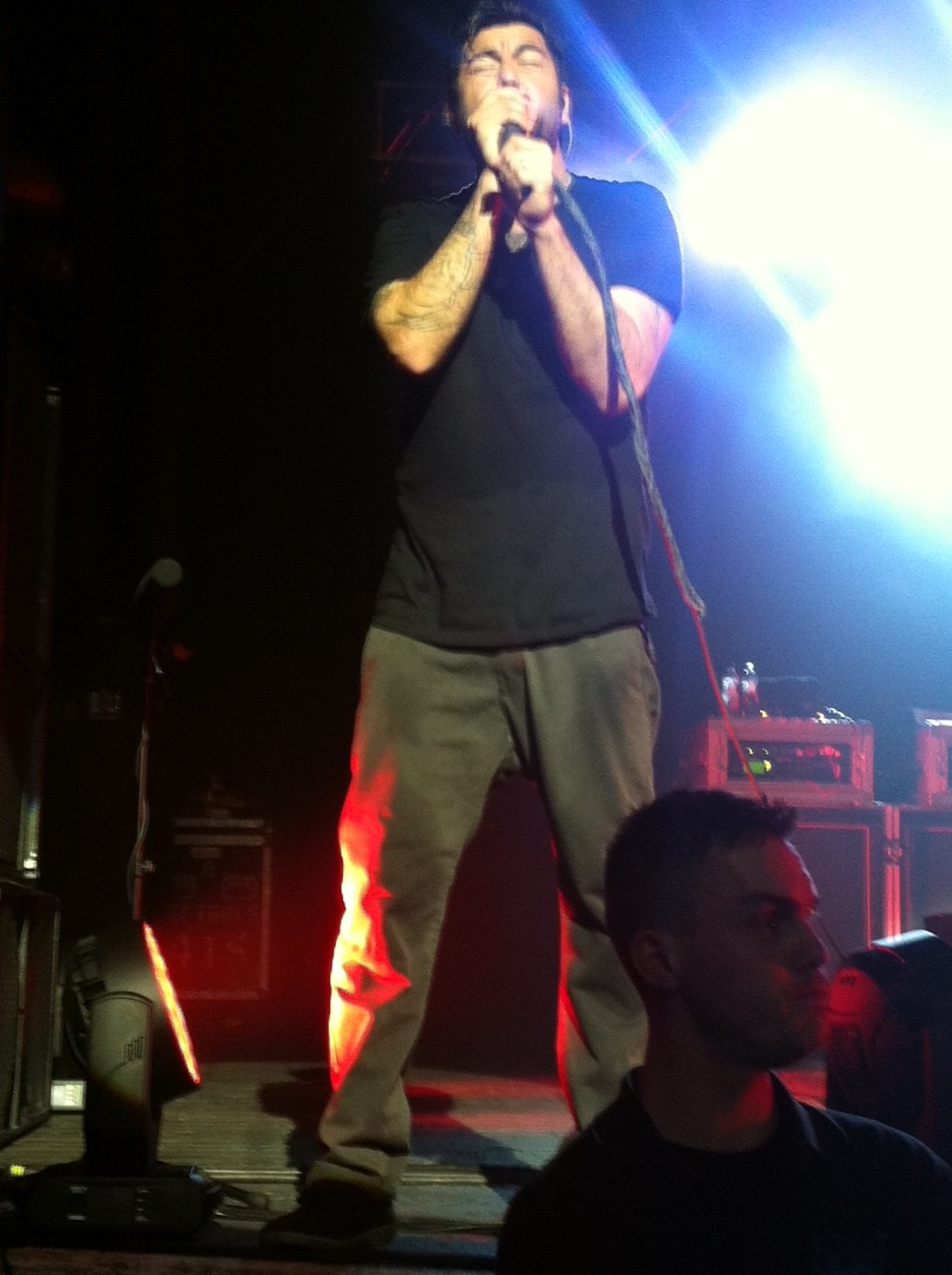 Anyway, back to seeing them in London. Just two weeks after arriving they were playing at the O2 Brixton Academy, and even at $150 a ticket, I went. It felt damn good to see tshirts, beards, dreads, tattoos, and gauged ears. No sweater vests, ties, dress pants, or blazers. A complete 180 from the suit-style I’ve grown to associate with London. And I wasn’t the only one who wasn’t a fan of London style. Chino joked, “Today I went to Top Man. Which I thought was an ironic name because there’s not a single top in that place that a real man would wear.” But at one point the joking subsided for a shout out to Chi, with one of the loudest cheers I’ve ever heard in my life.

I don’t know if it’s just because I was feeling high from the anticipation, but everyone at the show seemed way more polite than any concert-goers in the US. Instead of herding and shouting, security was using words like “please” and “thank you.” And when people walked by on the floor they always said “sorry.” If you were ambitious enough to make it to the front row, they were up there giving free squeezes of water. I’ve only seen that at outdoor festivals like Ozzfest, not indoor shows in the middle of winter. With a few “excuse me’s” I managed to push my way up to the front rather easily and went trigger happy with my shitty iPhone camera. Should’ve snuck in the GoPro. 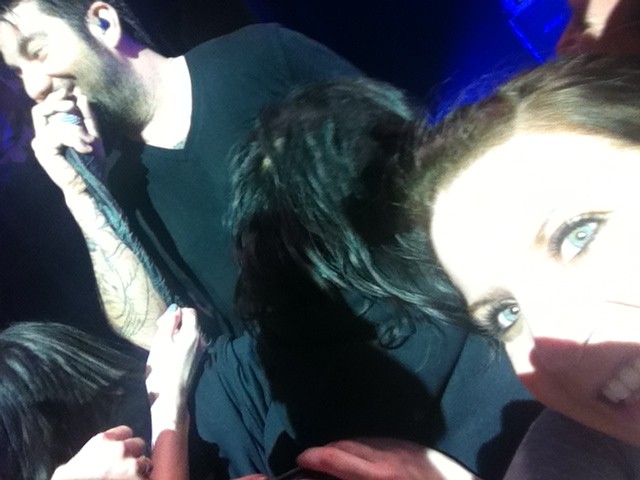 Yep, I’m a creep. Figured this is as close as I could get to having a picture of “me and Chino.” 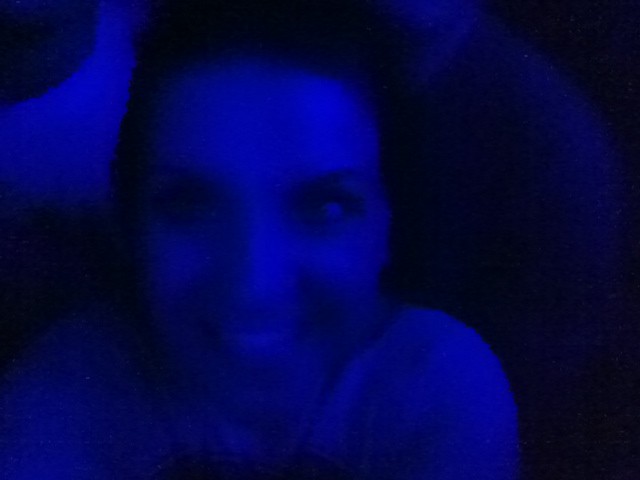 For real, this is a terribly illegible photo my iPhone 4 took at one point

I swear this video is crystal clear on my iPhone!

After the set I got a guitar pick from Stef and brought myself back down from cloud nine to make my way home.

But even with this entire amazing experience, it still wasn’t the same without Chi. Sergio is a great fill-in and I’m glad the guys have continued to push forward with the band. But for some reason my eyes just aren’t drawn to that side of the stage the way they used to be. I think we were all waiting for the day that Chi would bounce back and be able to play a show again. Waiting to see that tearful moment where, even if he’s unable to rock out on stage, we’d see a home video where he picks up an acoustic and plays with the guys at home. Just knowing that day will never happen now feels so final. And sad.

So long, Chi. You will forever be missed and I think I speak for all of us Deftones fans across the world when I say that we are forever grateful for your many years of talent, music, and entertainment. And to the Deftones, take care guys. We know this will only fuel the passion and emotion behind your next album, and all of those to come.

Who would’ve thought that my favorite part of London would have absolutely nothing to do with the city itself? On...
Continue Reading