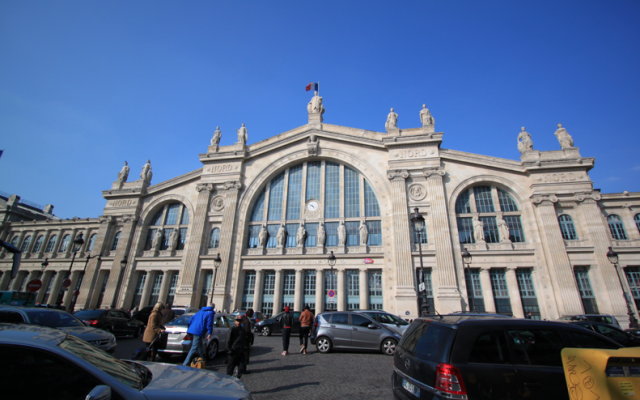 On New Year’s Eve there was news of thieves getting away with $1.3M worth of gear at the Apple store.

Two weeks ago my work partner who is doing the life swap with me had his backpack stolen while sitting in the McDonald’s across from Gare du Nord.

Hell, thieves are even breaking into museums and trying to saw off elephant tusks for a quick buck.

Is it just me or is theft on the rise in Paris? Or maybe before I was just more naive than I thought, and traveling with my super-cautious mother has me just now noticing it? To be fair, I’ve only been to Paris twice—my first time in September 2011 and my second this past weekend. But I definitely felt more on edge this time around and noticed much more suspicious behavior around me.

When we arrived at Gare Du Nord it seemed as though our entire sold-out train had beat us in line at the ticket machine for the metro. So I set my mom off to the side with her two carry-on bags while I went in search of more machines, backpack and shoulder bag in tow. Once I got to a slightly shorter line at the opposite end of the station, a man approached me asking if I wanted to buy a train ticket from him. Immediately afterwards an older woman cut in front of me frantically claiming she was late for a train in French. It seemed a bit strange, but I didn’t make much of it since neither one came within two feet of me and I had all of my valuables securely tucked away.

When I got the tickets I went back to my mom who was white-knuckling both bags and refusing to take her eyes off a group of young boys. I looked over as she whispered to me what she witnessed in those 15 minutes.

There were a group of three nice enough looking guys wandering amongst the crowd. I only saw the one (dark hair, medium complexion, leather jacket) as he scoped out his next victim. Minutes before he had approached my mom asking if she needed help. She told him no, and he moved along towards the ticket machines. A group of English speaking tourists accepted his offer of help, and he grabbed the credit card they were using with the same hand that was also holding a small machine (possibly stealing credit card information?) before helping them complete their purchases. After they got their tickets they thanked him and were on their way. But then he motioned to one of his friends to follow the group who were heading towards the M4. And he did.

It really disturbed me that my mom had only been in Paris for twenty minutes and already she’d witnessed this. Especially since this was her first time ever leaving the United States and she was already a bit of a nervous wreck.

So I did some reading up on theft in Paris, and though I shouldn’t have been, I was surprised to read how huge of a problem it is and has been. As it turns out, Paris has been rated one of the top ten pickpocketing cities in the world on TripAdvisor.

What’s sad is that nearly half of the pickpockets arrested in Paris are minors. And they’re not at all thug-looking lowlifes. Some of them are fashionable groups of pretty girls, or even young girls carrying babies. Apparently they roam the RER and metros near tourist spots looking for vulnerable passengers to catch off guard. There’s even some more aggressive groups who will surround you by shoving their clipboards at you, asking you to sign their petition while they rifle through your bag, or simply grab it and run.

It doesn’t even sound like a matter of being in the wrong place at the wrong time. They scope you out and follow you, waiting for the right time to strike.

Another thing that isn’t quite as scary but still equally WTF-worthy; in London my mom saw something on TV about a gold ring scam. She told me over dinner one night that a person will bend down in front of you and appear to pick up a gold ring, asking if it’s yours. She wasn’t sure exactly what they did next, and I didn’t bother to look into it as I generally don’t speak to shady people in the streets anyway. Then one day in Paris we were walking along the Seine River near the Pont Royal when a woman bent down in front of us to pick up a ring. Immediately my face lit up and I looked at my mom like, “holy shit what happens next? Does she jump us? Pickpocket us?” so we hurriedly blew her off with a “Psh, nice try” and continued walking. But after telling Marcus (who’d just had his bag stolen in Paris the weekend prior) I found out what happens because he’d fallen for the gold ring trick that weekend as well. If you take the ring they’ll hand it over and walk away. Moments later they’ll come back trying to get a few Euros off of you. Obviously they feel you owe it to them since they just gave you a gold ring. I don’t know who in the hell would fall for that, but at least it’s kind of your own fault if you give them money. 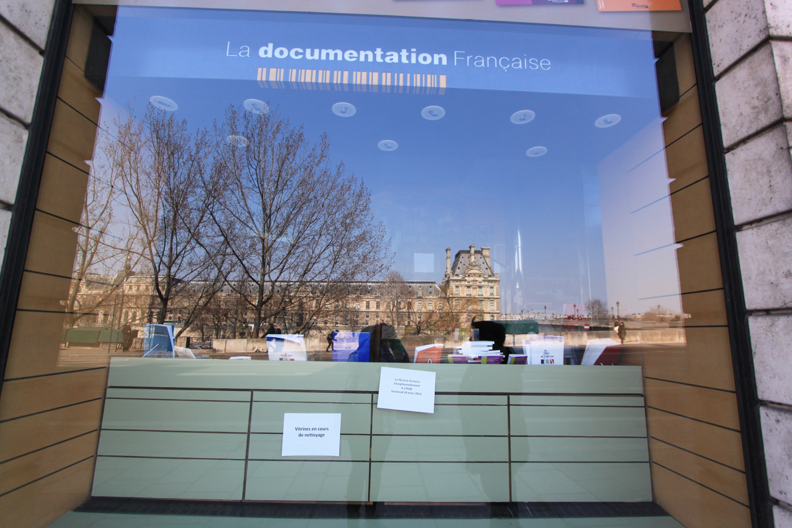 I snapped this window reflection pic shortly after being approached by a gold ring scammer. Funnily enough she ended up in the shot. She’s the one hunched over towards the middle of the reflection.

I guess I’m writing about this because it’s disturbing to think that I’ve more than likely been a target, and probably more than once. I can’t help but think about how many close encounters I was unaware of, especially as a frequent solo female traveler. Sure I’ve always heard about pickpockets and people setting their stuff down only to turn around and see it gone, but it’s creepy to know these people have such intricate plans for getting your stuff. I’d like to think of myself as a fairly aware traveler, especially after growing up with a mother so observant as mine, but I never realized how oblivious I was to these things going on around me. I just hope that in letting others know about the extensive lengths these thieves go to, I might help prevent at least one person from carelessly leaving their bag unzipped as they get help buying a train ticket.

But my real question is why do authorities seem to do nothing about it? It’d be such a shame to see such a beautiful city turn into a worrisome place for travel. Don’t get me wrong, other than constantly looking out I didn’t feel unsafe in Paris (even with the sudden swarm of 11 police vans at Jardins Du Trocadéro or the evacuation of the Eiffel Tower on Saturday due to a bomb threat). I just felt much more alert, and as a result I noticed much more of the unromantic side of Paris. The first time I was too busy gawking at the architecture so I remained blissfully unaware of any dangers. I just went about my business while carrying on with my normal common sense and I was fine.

What do you think? Have you had any experiences like this in Paris, or do you feel safe there? Are there any cities you’ve been to that seem worse?