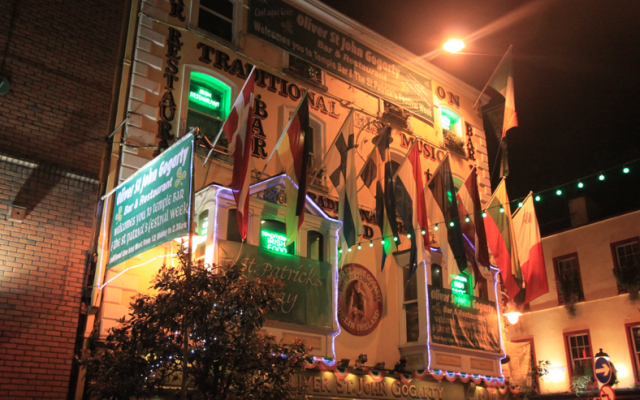 I spent most of yesterday not only rehydrating and grazing on comfort food to ease the lingering hangover of my second weekend in a row in Dublin, but also trying to find the words to describe what Saint Patrick’s Day in Dublin was like. Then I realized, being in Dublin for St Patrick’s Day is a lot like spring break. But less of the sunny skies and sandy beaches, and more like drizzly grey skies and walkways littered with shattered glass, empty beer cans, and the occasional pile of vomit. But despite the nearly-freezing temperature, there were still plenty of scantily clad girls running around!

So, ladies and gentlemen, contrary to popular belief by many US people, St Patrick’s Day in Dublin IS a big deal. And it’s not just one day of gluttonous fun, the festivities run for five days total. 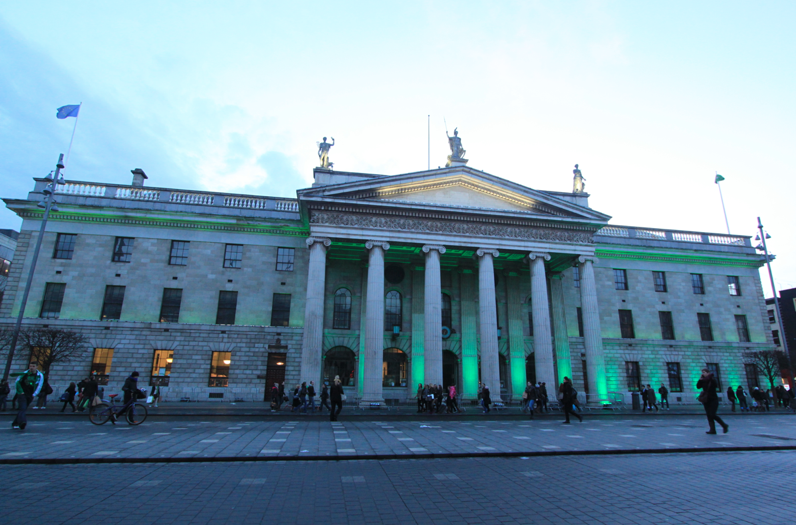 The General Post Office going green for the big day 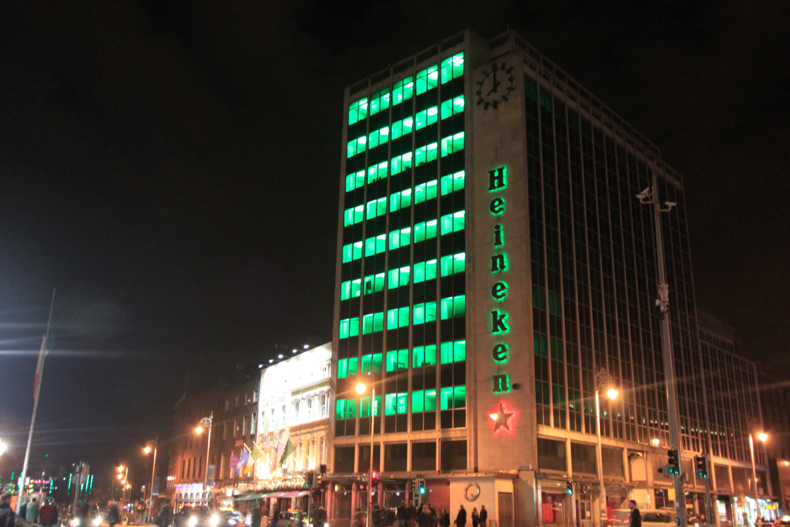 That being said, I must add that the city is jam-packed with drunks from every country except Ireland. Like Times Square on a Saturday packed. I read there were 225,000 people estimated to be passing through Dublin airport this weekend, and that doesn’t even include those coming over by ferry such as myself and about a thousand passengers on board with me. A fairly sizable amount for a city whose population ranks in at just above one million.

A majority of these tourists seem to be college students. They’re loud, happy, and at times borderline obnoxious as they sing at the top of their lungs while skipping down the street with their arms linked. Some of them just look like drunken babies stumbling a zig-zagged line while shouting at the ground and holding onto their friend’s arm as if they’re walking a flaming tightrope. Hard to believe it’s only 2PM, the day BEFORE St Patrick’s Day.

Everybody is clad in green and orange, with Irish flags tied around their necks like capes, shamrocks painted on their faces, and the girls who actually wore an appropriate amount of clothing donned shamrock tights, neon green tutus and wigs. The amount of Guinness flowing from the taps was unreal, and I’d say about 85% of the the people in any given bar had a Guinness in hand. Considering the average pour-time for a pint, I’m surprised the bartenders were able to keep up with demands. 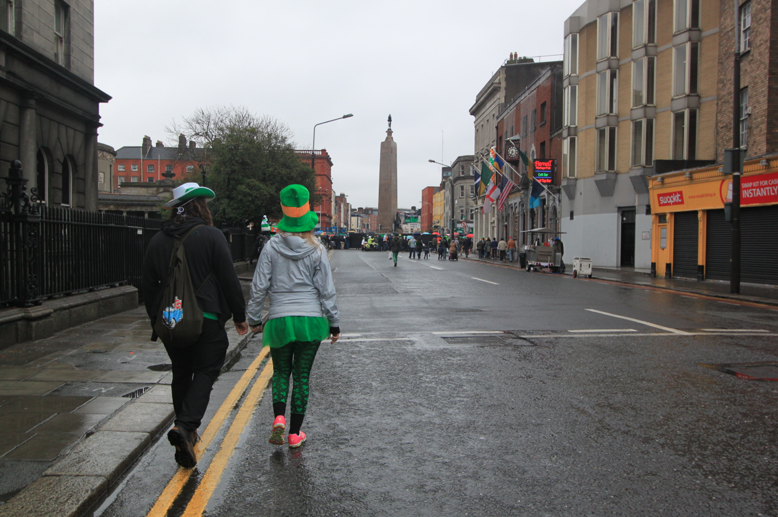 Once 8, 9 o’clock rolls around there’s live music flowing from almost every pub, playing a mixture of top 40 hits and traditional Irish music. Every single bar in Temple Bar is massively crowded like you’re working your way up to first row at a concert, to the point where the crowds are spilling out into the streets or bouncers are turning people away because they’re at capacity. One of the first pubs to lure us in with their live music and deceivingly empty appearance was Fitzsimons. As soon as we walked in I’m pretty sure we floated our way over to the bar, because I don’t think my feet touched the ground once. We had to seek space on the fourth floor stairwell just long enough to slam our beers and check in on Foursquare using their free wifi. After that we diverted our drinking route just outside of Temple Bar. It’s amazing how much the atmosphere can change just a block away. 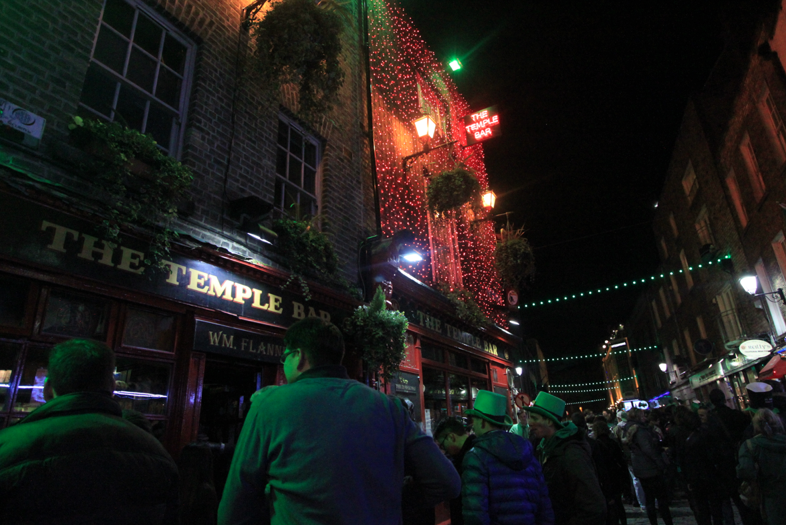 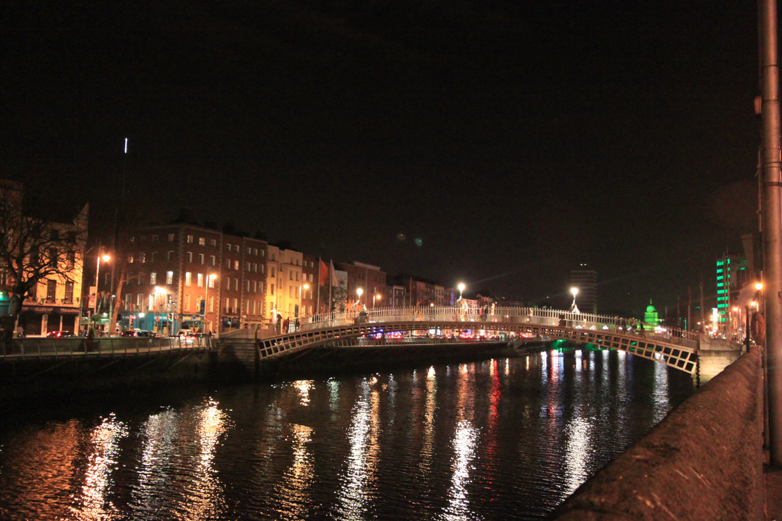 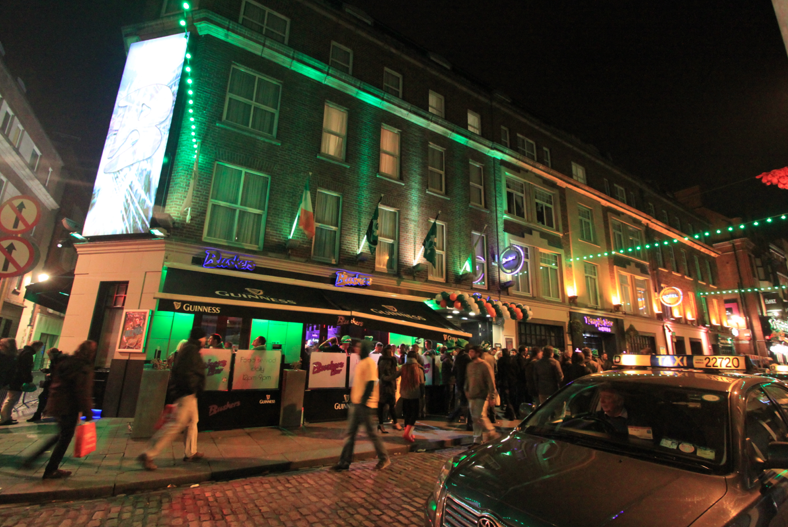 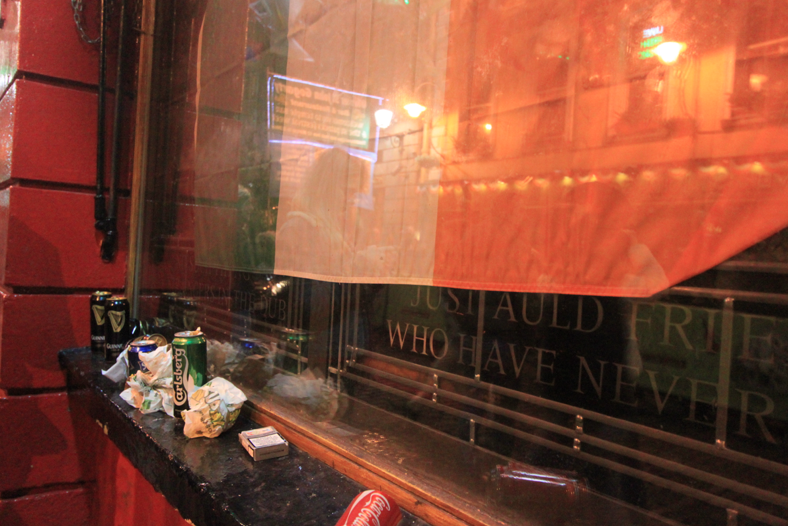 I wish I could tell you the name of the place(s) I visited the rest of that night because they were absolutely perfect. Maybe I’ll do some digging and see if I can follow through on a later post. Once we got off the main strip of bars, even just a block over directly on the River Liffey, the crowd was much more tolerable (but still drunk and fun), the live music was actually good and entertaining, and the Guinness was even more delicious since it was so easy to get to the bar and get one.

On actual Saint Patrick’s Day we ventured out even further to explore some less-touristy spots and found ourselves inside Club Conradh na Gaeilge, the only pub in Dublin that still speaks Gaelic (or as the Irish call it, Irish). We found it by walking down some pub-less area before seeing two green and orange semi-slutty chicks emerge from a random black door in the basement of some building. So we gave it a shot. But more on this gem of a place later. 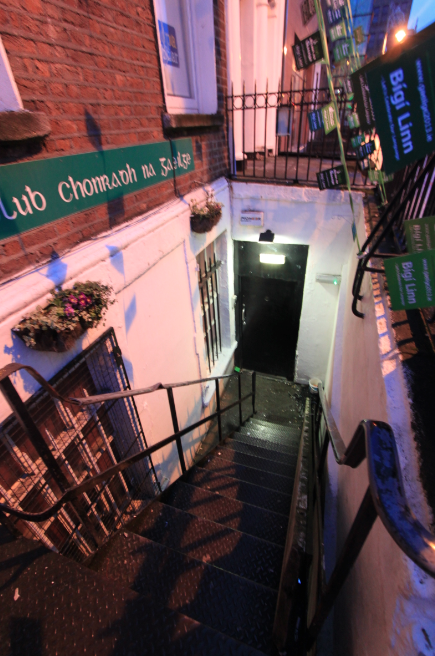 When in Dublin, do wander into random basements. Good things will happen, I promise.

Aside from all the drunken debauchery there was of course the St Patrick’s Day Parade. I’m not a fan of parades. At all. Between the crowds, the waiting, the endless acne-faced marching bands that sound identical to every other marching band, to the random floats and costumes that I’m clearly not artistic enough to make a damn bit of sense out of, I find them dull and unexciting. But how often would I be in Dublin for St Patrick’s Day, staying just one block from the start of the parade route, and unable to sleep due to a massive hangover? So I checked it out.

This year they started a “The People’s Parade,” inviting 8,000 tourists from around the world to march through an hour before the actual parade itself. I didn’t catch that part because it was rainy, and while all the websites said to be in place along the route no later than 1130, I strolled up at 1155 and still got a good spot. 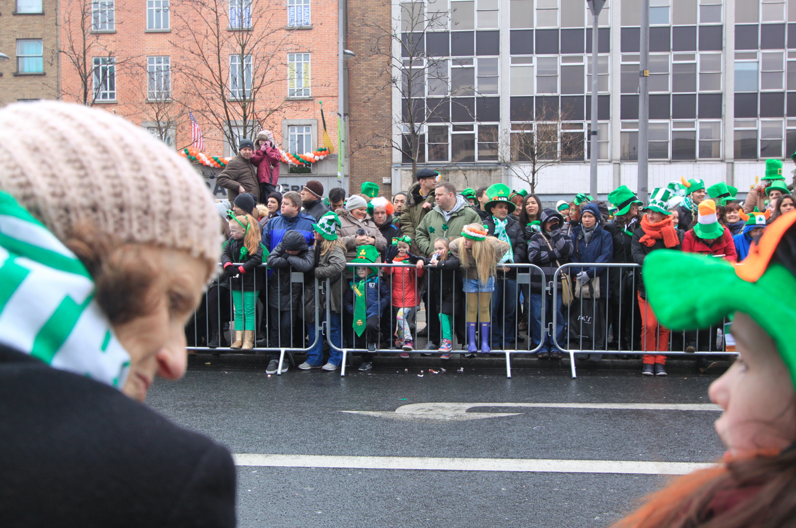 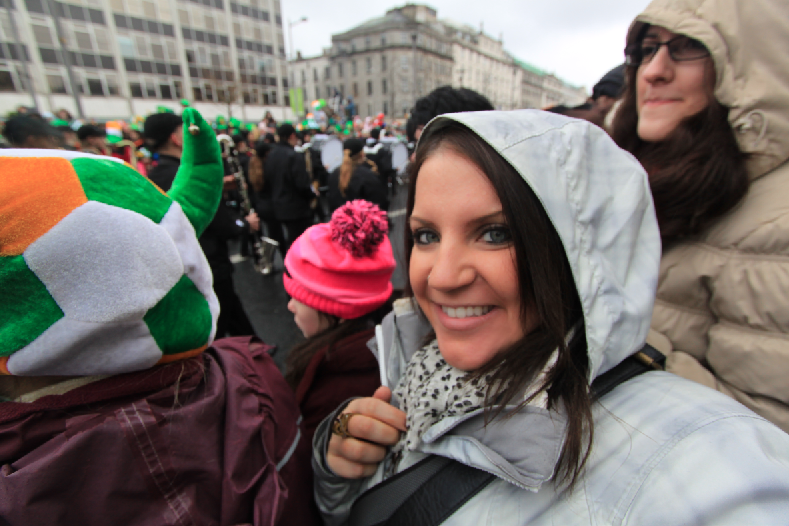 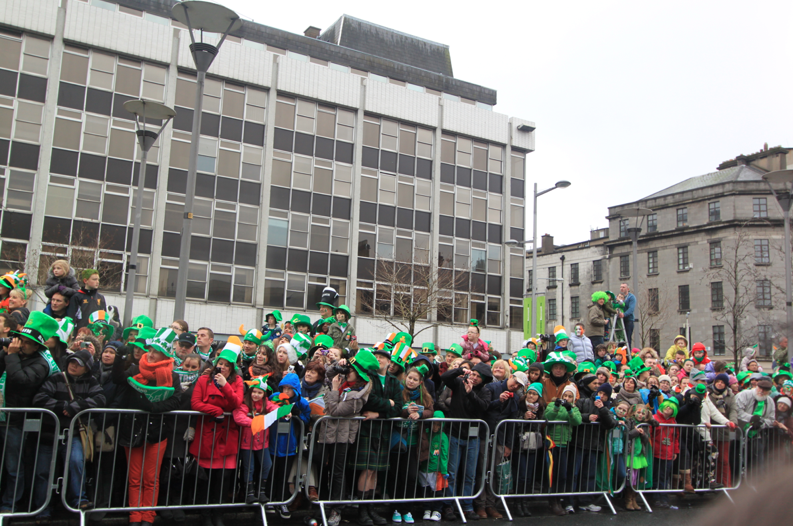 People were climbing ladders to get a good view 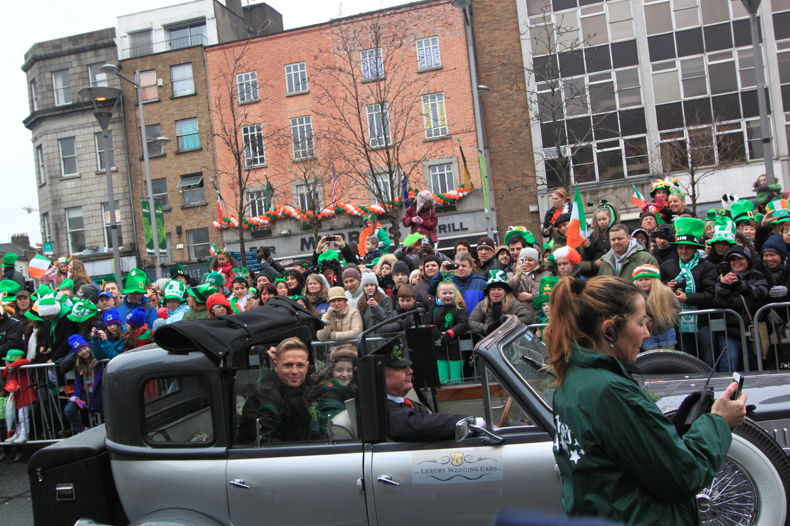 Apparently this guy was famous, but I have no idea who he was. Any idea? 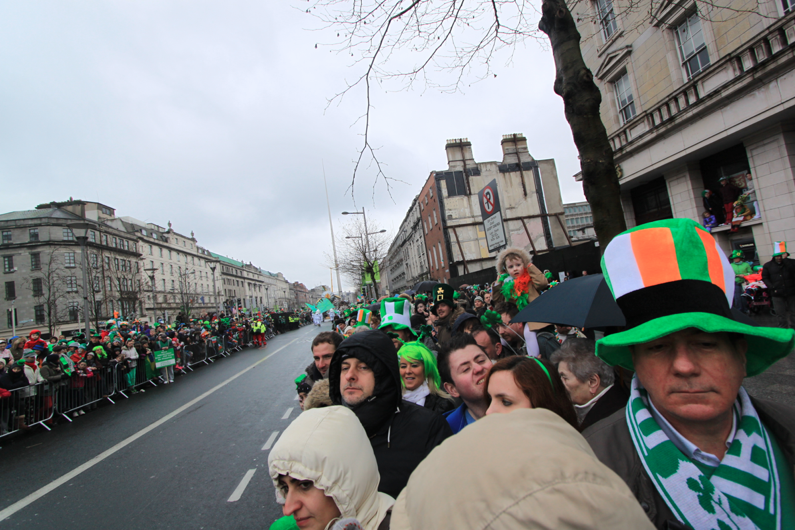 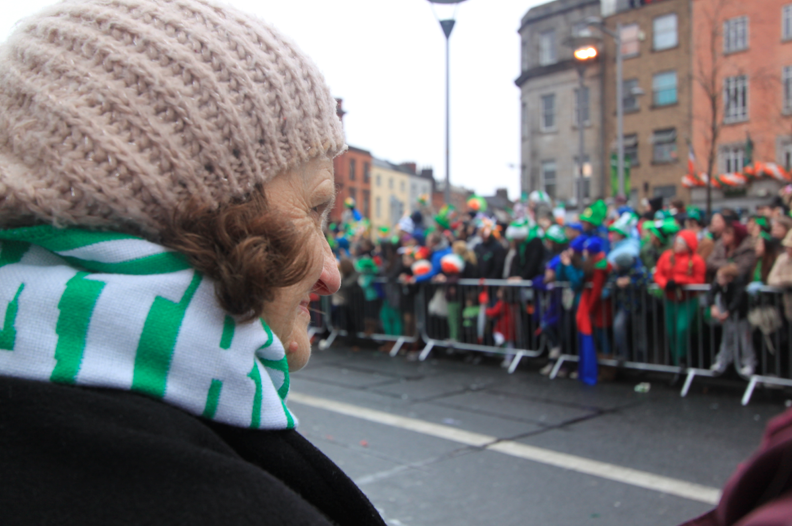 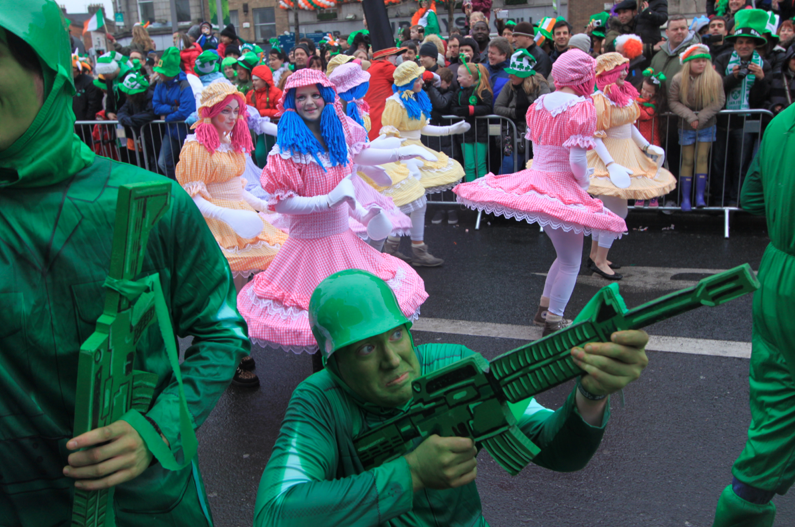 The parade was a parade. Sure there were a few costumes and floats I could appreciate just for the sheer amount of hard work that had to have gone into making them, but aside from that I wasn’t that impressed. It seemed like there were more Americans marching than anything. The FDNY, Purdue, and about a dozen other US school’s marching bands.

So, you’ve got a year to plan. Should you do St Patrick’s Day in Dublin?

But two things that will help your trip immensely,

1 Plan ahead. Prices continue to skyrocket big time the closer it gets to March 17, and literally every hotel room in the city will be booked up well in advance. We started looking into this about three months before and hotels and flights were still available at a reasonable price. Since it ended up being a last minute trip, flights were close to $600 roundtrip from London (the weekend prior I paid $200 to get there), and every single hotel room in the city was full unless you wanted to spend $900 a night. I ended up paying $200 to crash on a couch at the airbnb guy’s house that I stayed at the weekend prior.

2 Make sure you know what to expect, and tailor your plans accordingly. Ready to get wild and party your face off like you’re 18 again? Great, you’ll love Temple Bar. Want to head to a local pub and actually find a seat to enjoy live music and conversation? You’ll find that too. It’s surprisingly easy to escape “the madness” (as we’ve named it) and find a comfortably busy pub. So if crazy spring-break style partying isn’t your thing, don’t fret, just stay the hell away from Temple Bar after a quick drink (come on, it’s like a car accident). Do I wish maybe I would’ve done it 8 years ago when I was young and wild? Maybe. Would I do it again? If someone asked me to go along, hell yes. Bottom line is I love Ireland and I love Irish culture. I’ll take any excuse to visit Ireland again, but I might sit out the next parade.

What Not to do in Dublin

I fell in love with Ireland the second I stepped off the plane, though I wasn't exactly sure why. Especially...
Continue Reading