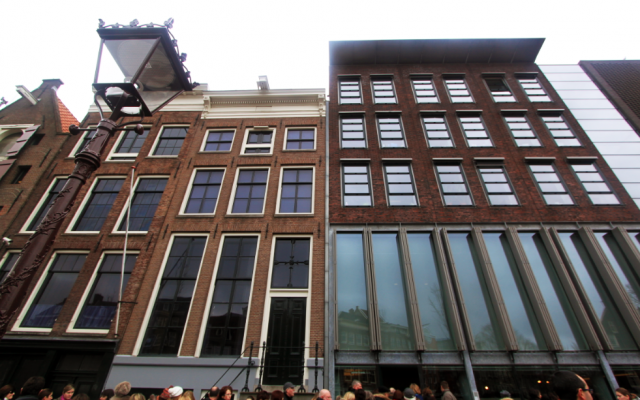 Seeing the Anne Frank House was one of those things that I had no idea how painfully bad I needed to see it until I realized it was right down the street. The night I arrived in Amsterdam my friend met me at Centraal Station and we walked about 10-15 minutes towards Jordaan to his apartment. That’s when we crossed the bridge on Haarlemmerdijk and he pointed down the canal towards the towering Westerkerk Church, before saying “the Anne Frank House is down that way” rather nonchalantly. My brain just kind of stopped, trying to process the information like “wait, what? That’s here?” I never associated Amsterdam with Anne Frank (probably because I always had trouble staying awake in history class), but it suddenly became the ONLY thing I needed to see in Amsterdam. 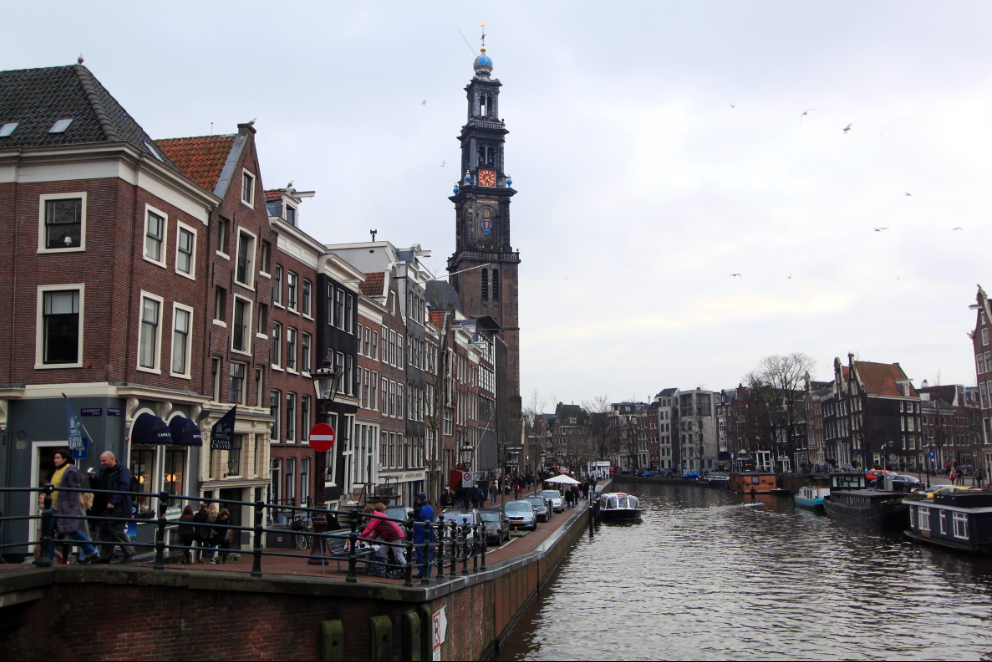 Westerkerk Church and the block of the Anne Frank House

So my first afternoon there, that’s exactly what I did. I followed the signs up Prinsengracht until reaching a massive hoard of people standing in front of what I assumed was the Anne Frank House. It was about 1230 in the afternoon and the line was wrapped well around the building. Any other tourist attraction and I would have turned away, but not this. Some of the locals suggested ordering my tickets in advance, or at the very least going early to avoid the line, but I failed to take either of those tidbits of advice. 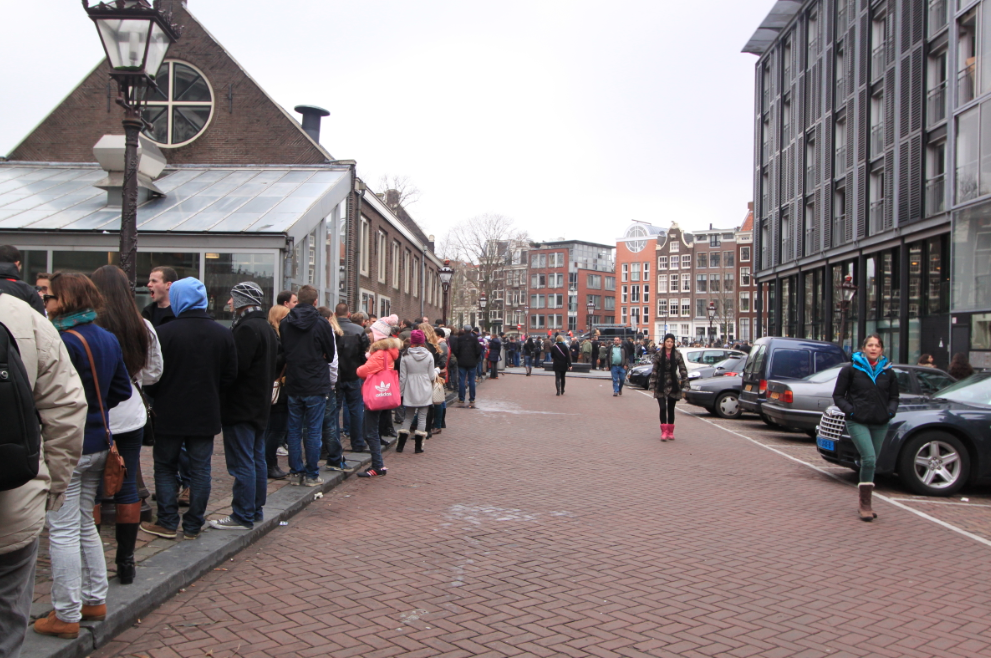 The line up ahead and around to the front of the building. All in all it was about an hour and a half wait.

On the plus side they have free WiFi in line to ease the wait time, which I promptly used to brush up on my history. It only took a few minutes of reading Anne’s story before I developed a huge lump in my throat that didn’t disappear until I walked out of the museum three hours later. 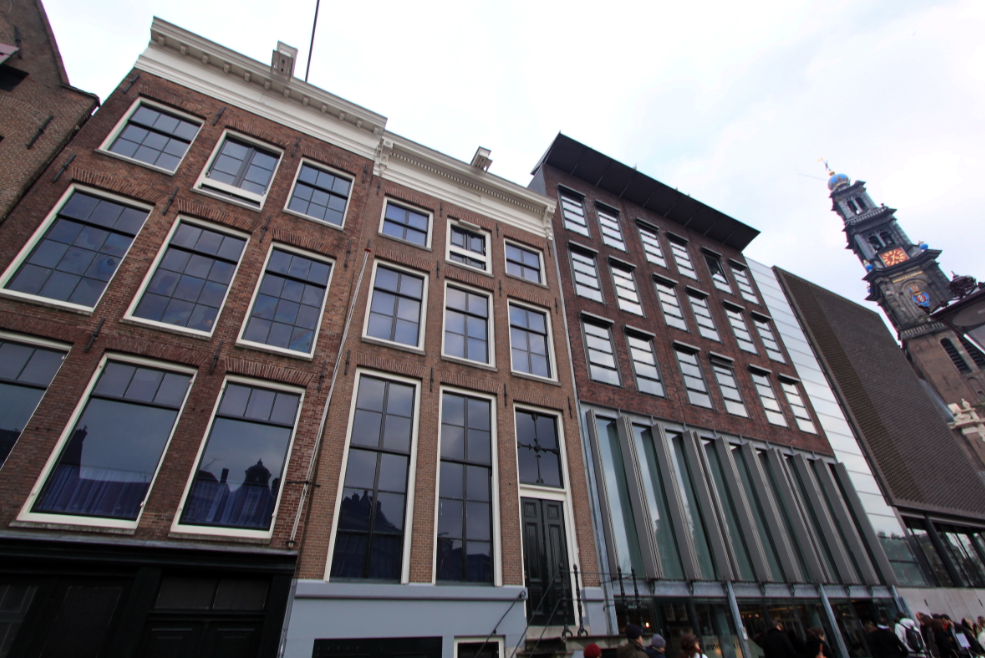 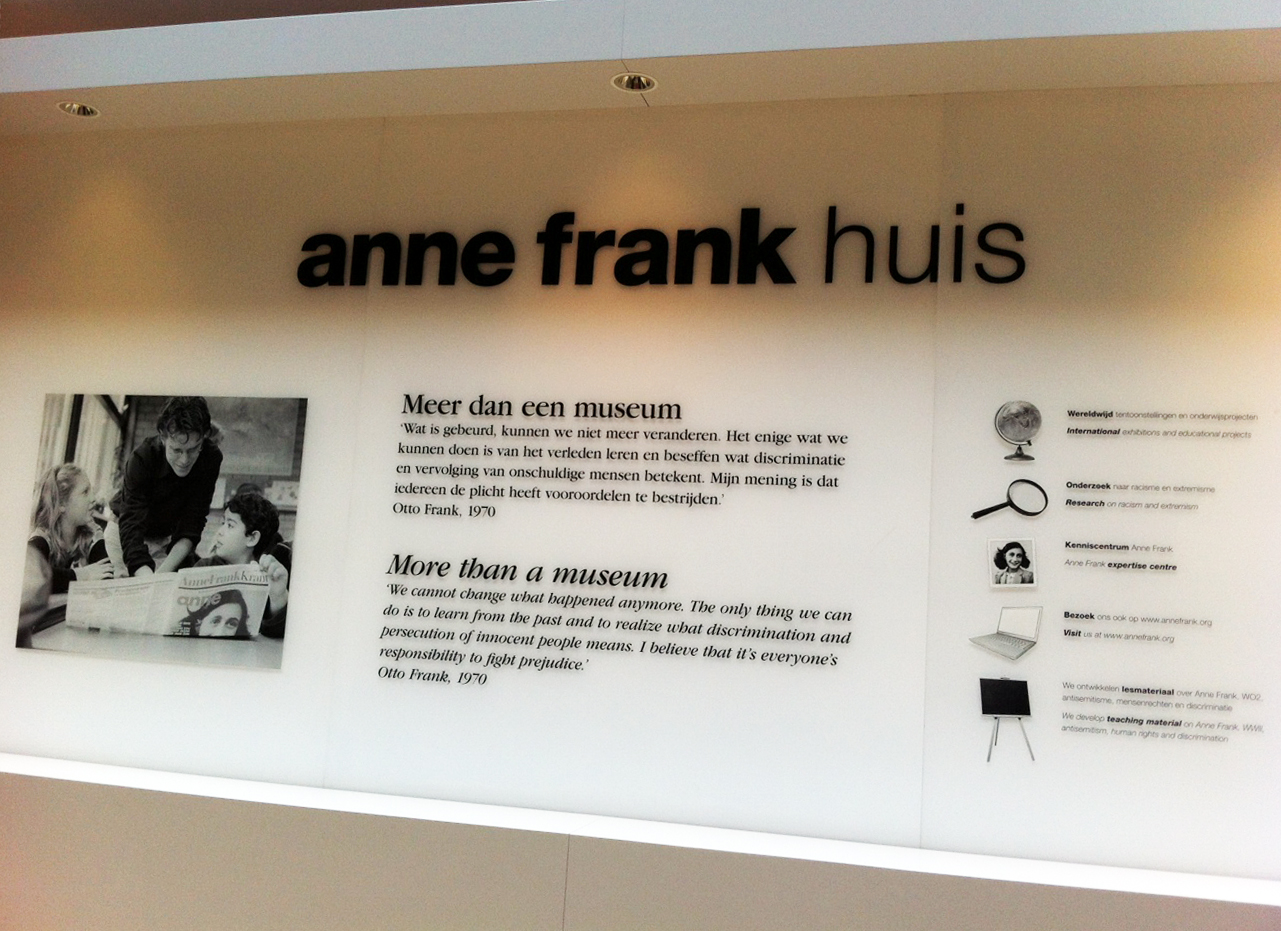 The guys at the front door looked at my massive DSLR strapped across my chest and gave a nod towards the “no cameras” sign. Damnit. So you’ll have to bear with me, I tried to be sneaky and snap a few cell phone pics but my outdated iPhone 4 doesn’t necessarily shine in low-light situations.

The layout lead us from one room to the next, starting in the (now empty) warehouse of Otto Frank’s company Opekta before climbing the steep stairway up to the Secret Annex. 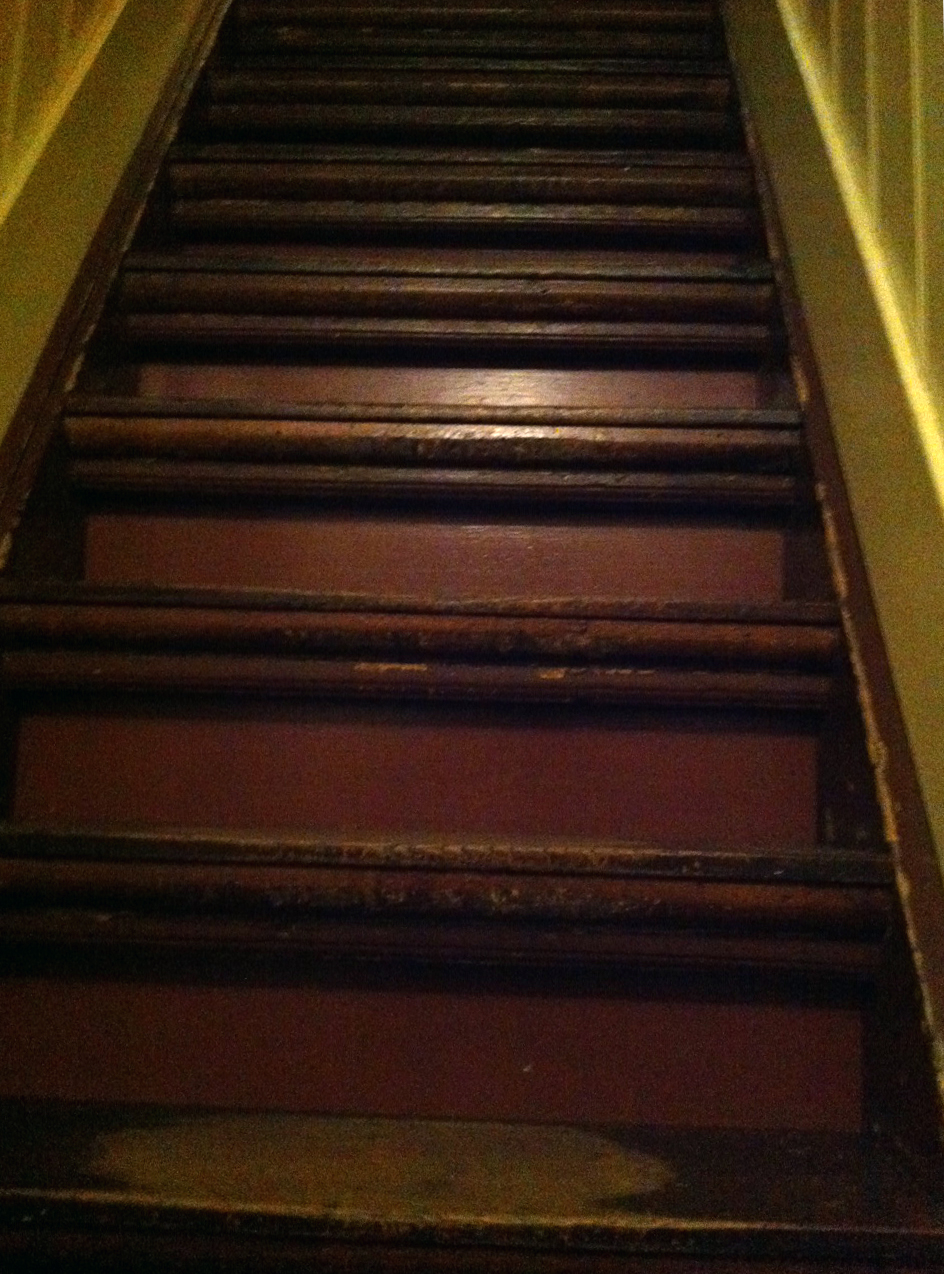 When I reached the top of the stairwell there was a small landing area with the original moveable bookshelf covering the entryway to the Secret Annex. 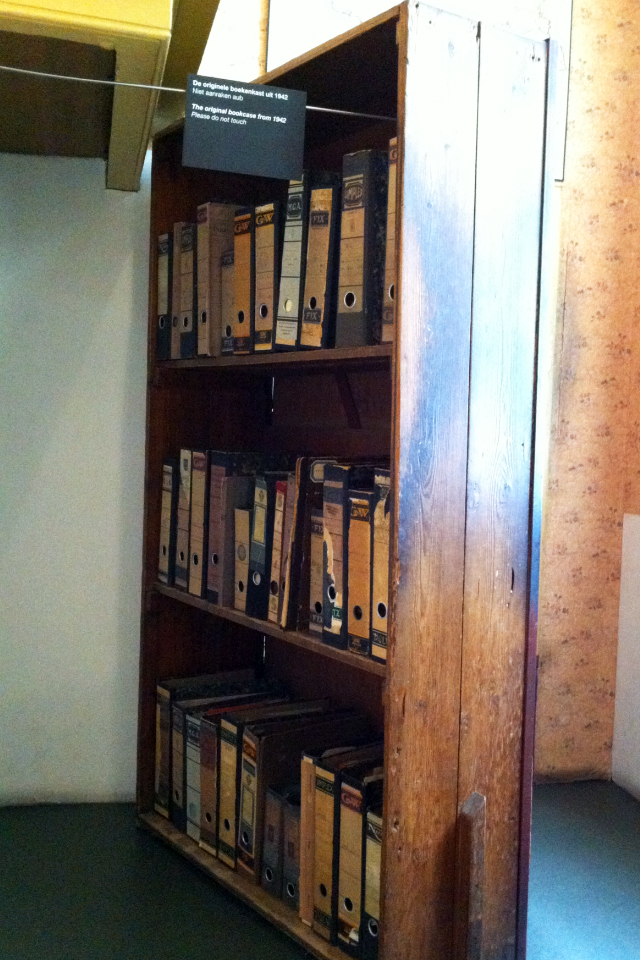 It was a little hard to imagine some of the rooms as a living space. When the families were discovered and arrested the place was emptied out, and when Otto Frank returned he chose to keep it that way as a symbol to everything that was taken away when he lost his family. But upon turning it into a museum after the war, they added short videos—interviews with Anne’s father and friends, people who’d helped the family in hiding—old family photographs, framed documentation, and even photographs of movie stars Anne used to decorate her walls, while printed excerpts from the diary guided us through each room.

It was like traveling back in time, and for three hours I didn’t feel like I was living in 2013. I was completely immersed in the world of Anne Frank and not a single thing could divert my attention. The windows were covered and the lighting dim, but once we reached the top floor there was a mirror perfectly positioned to reflect the dreary grey skies from the attic. It was almost alarming how good it felt to get a peak at the outside world after just a short time of being inside. I can’t even imagine how it must’ve been to be locked up there for two years.

I’ve always found it difficult to imagine historical events as though they ever really happened. It always seem like fiction to me. Hell, I live just a few blocks from the World Trade Center in New York and I still can’t believe that 9/11/01 happened right there. So maybe it’s the writer in me and the fact that as a kid Anne’s age, I too kept a journal in place of a close friend. Or maybe it’s just basic human compassion, but her story, as terribly disturbing as it is, is somehow much more relatable to me. Not only did I find myself understanding and even envisioning life in the Secret Annex, I found myself empathizing and asking questions like “how could this have happened?” “what if Anne hadn’t died at Bergen-Belsen?” or feeling my face begin to boil with rage while wondering if maybe, just maybe Anne had known her father was still alive, she may have had the desire to keep fighting just a few weeks longer until the camp was liberated.

Basically the Anne Frank House is worth every cent of the €9.50 admission fee (for adults). It’s located at Prinsengracht 263-267, just about a 20 minute walk from Centraal Station. It’s open every day of the year, but with around one million visitors annually it’d be wise to buy your ticket online so you can skip the queue. Then it should only take up about an hour of your day to navigate through the museum. Besides, it’ll probably be raining at least one day while you’re in Amsterdam so why not head indoors?

On my way out I bought the paperback diary in the bookstore and I’ve been engrossed in it since. It’s hard to imagine that after reading through two years of entries this book is just going to come to an end. So I’ve slowed down quite a bit, partially because I think I don’t want it to end yet. There’s something refreshing about the fact that inside the fictional world of my head Anne Frank is still alive, hiding away in an attic, learning foreign languages, and falling in love with a boy.