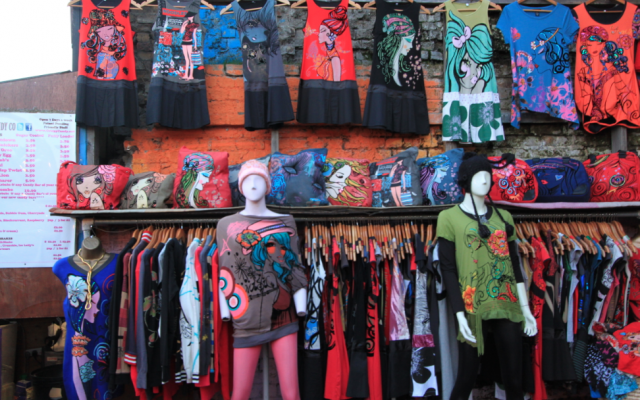 This past weekend finally brought blue skies and well above freezing temperatures to London, so I spent Sunday roaming around Camden Market with my friend Julie whom I met a few years ago in New York. She’s originally from France but currently living in Geneva, and luckily for me visiting London with her equally awesome friend for a few days. 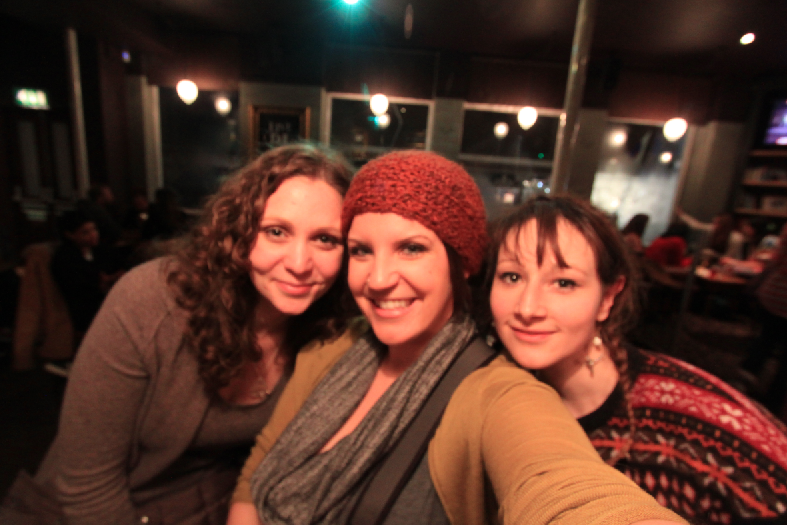 My selfies are out of focus about 70% of the time

Camden Market has been on my list of places to see since I’ve arrived, though I wasn’t exactly sure why since I’m not usually one to gravitate towards overcrowded shopping areas. But alas I went, and I was pleasantly surprised that it was far more entertaining than I’d expected.

The thing about Camden Market is that it’s so incredibly massive—it’s made up of six main sections, and then some—everyone’s bound to have a different experience. So let me give you a small sampling of what I encountered while strolling through for a few hours. 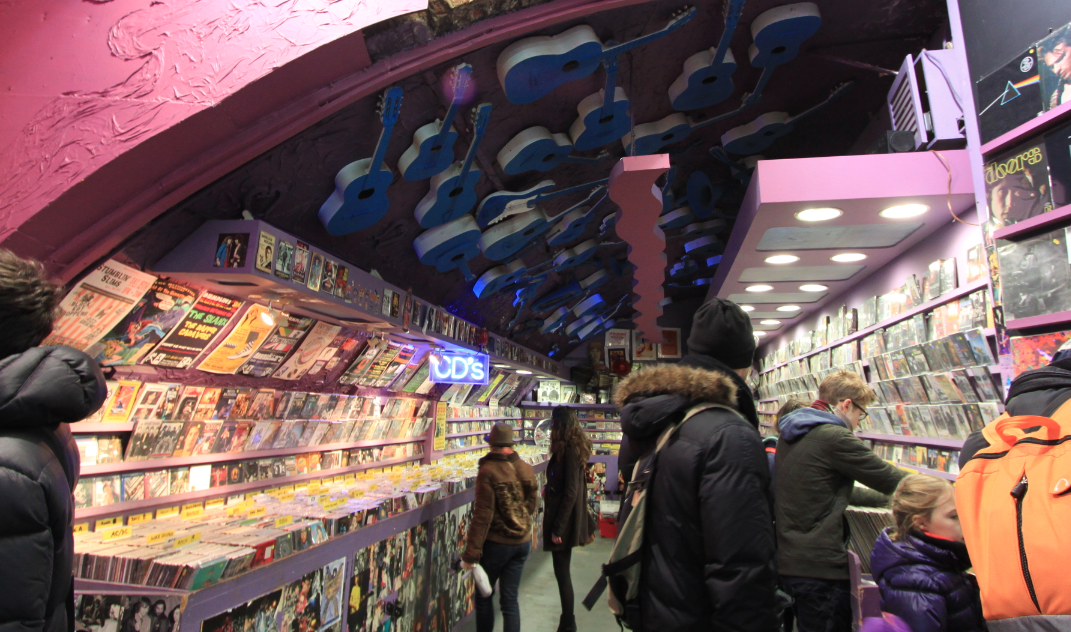 When we first started walking through the scattering of souvenir shops, shoe stores, and KFC’s, I wasn’t impressed. The overcrowded streets reminded me of East Harlem during a summer street fair, minus the sweaty heat. Then we went into the green Camden Market tent which was completely packed with countless, nearly identical clothing shops. Each booth owner tried to get our money—the women by pushing the latest fashions and “just for you” discount prices in our faces, and the guys by flirtatiously combatting our “we’re just looking” lines with “…looking for a boyfriend?” 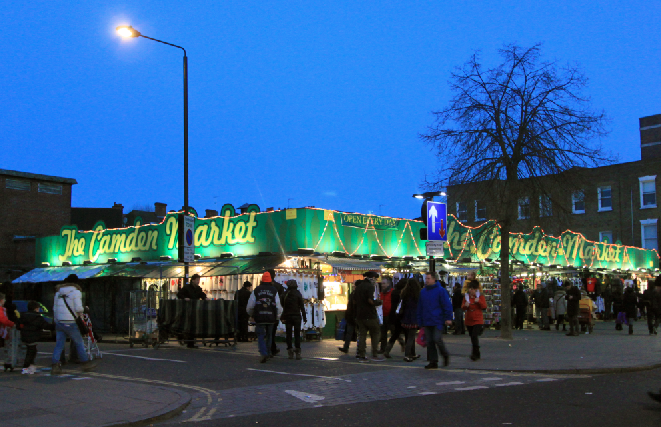 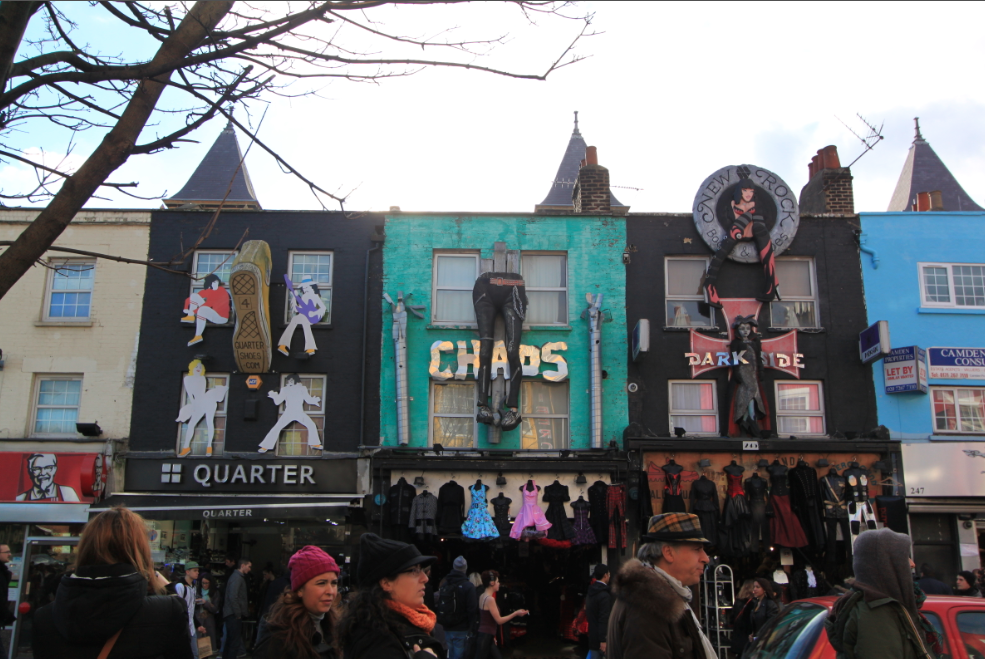 I was hooked as soon as we made our way towards the food in Camden Lock. The surprisingly harmonious scents of Indian, Thai, Chinese, and Mexican spices lured me in, and had I not been concerned about certain digestive repercussions I would’ve sampled something from each stand. But alas I found myself drooling over the sizzling fajitas that the two semi-Mexican looking men were serving up. I ordered carne asada tacos, which were… well, interesting. The corn tacos were stuffed with a mixture of what looked like canned chili, peas, corn, tomatoes, cheese, avocado salsa, and sour cream, on top of a bed of iceberg lettuce and deglo orange rice. Pretending for a moment that it wasn’t Mexican food, I suppose it wasn’t all that bad. In fact I’ll even bet that it would’ve been incredible after about ten beers. But I’ll never go back. 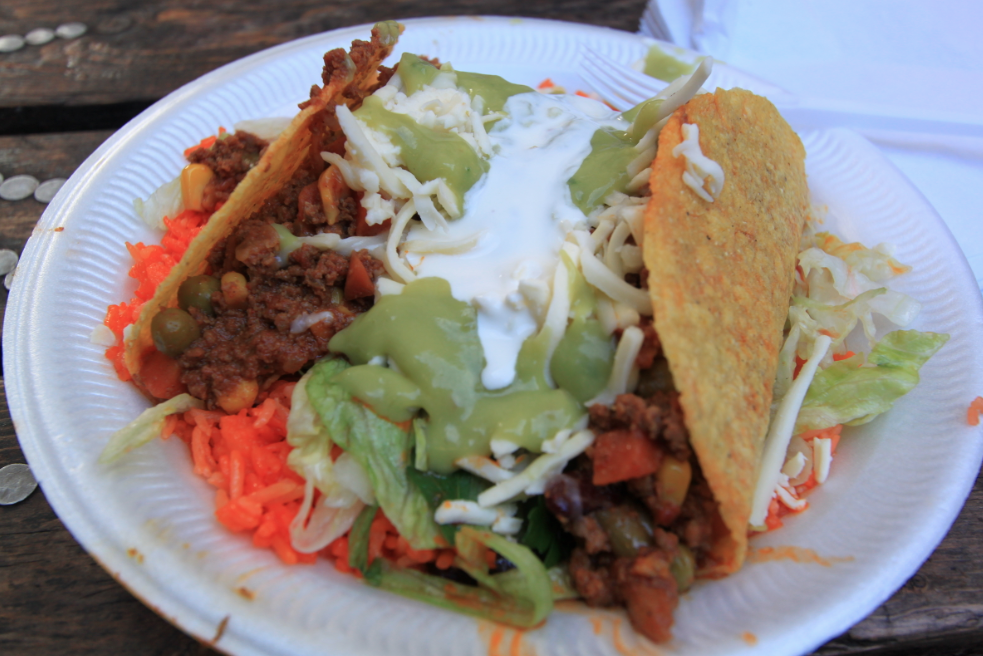 In my search for bottled water I was drawn to some no-name stand where I heard Tool’s Ænima album blasting. The dread-locked, tattooed, gauged ear guy running the stand (hello 18-year old Kim’s dream guy) was putting so much passion into making his coffee to the beat of Eulogy that I felt compelled to order a caffe mocha. And thankfully so. It was warm, thick, foamy, and overall a delicious companion for the chilly afternoon, even though it was gone in about six sips. 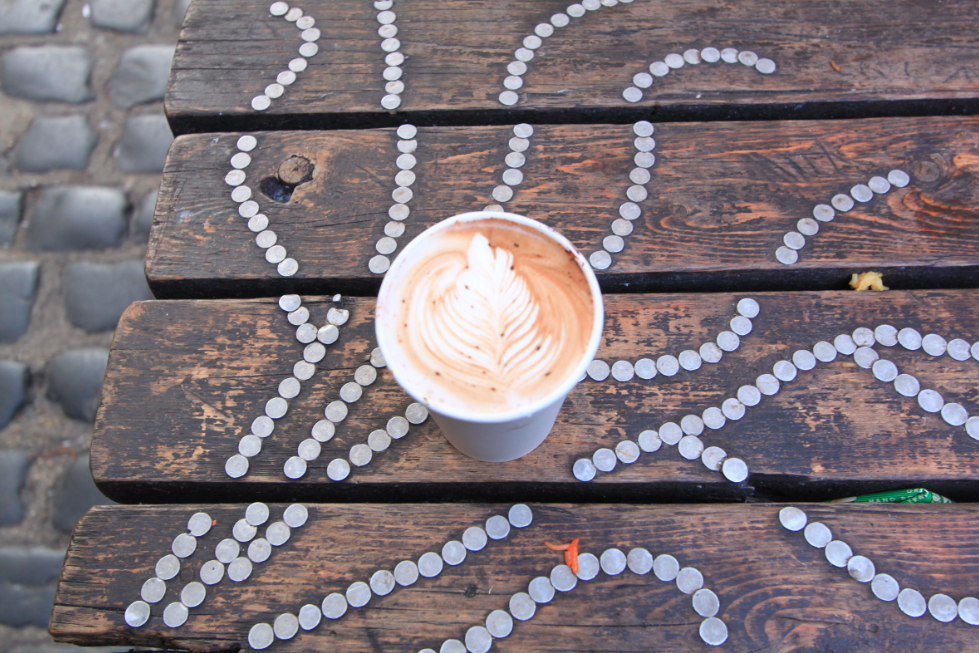 We finally made our way into the Stables Market and down to the pinnacle of my Sunday market adventure, Cyberdog. This place was like a rave, complete with pumping music, dancing girls in short shorts, wildly outrageous but equally incredible futuristic outfits, and I wouldn’t be surprised if there were even some drugs scattered about. They carried all sorts of wacky unique gag gifts and party clothes, from guitar baking spatulas, to galactic dresses you’ve probably only seen on the Jetsons, to OhMiBod iPod-powered vibrators that sync up with your music to get you off to a beat. (Or to help you beat off? Get it??!) Yep. 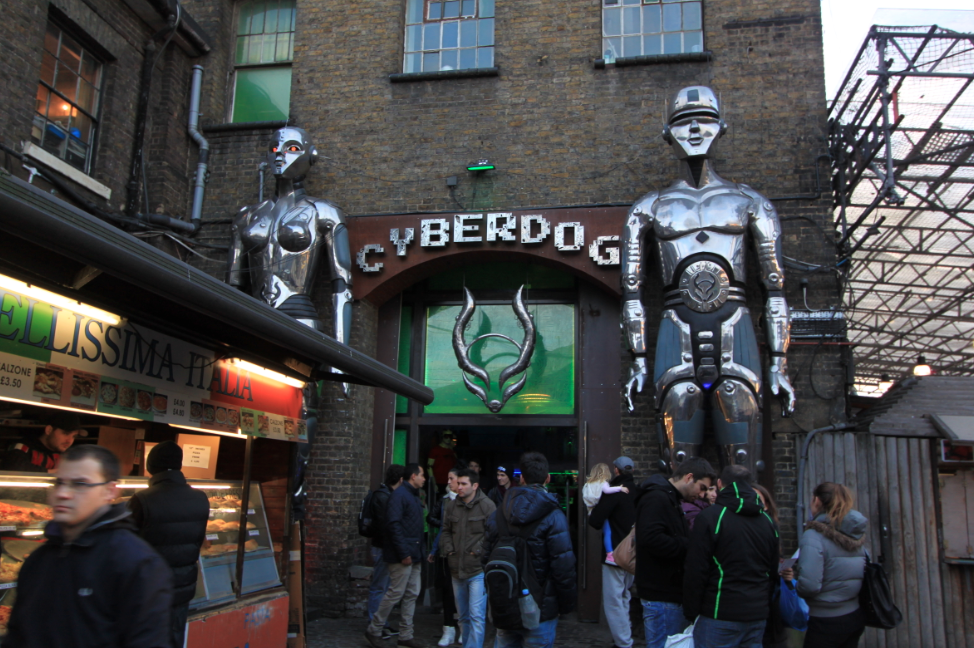 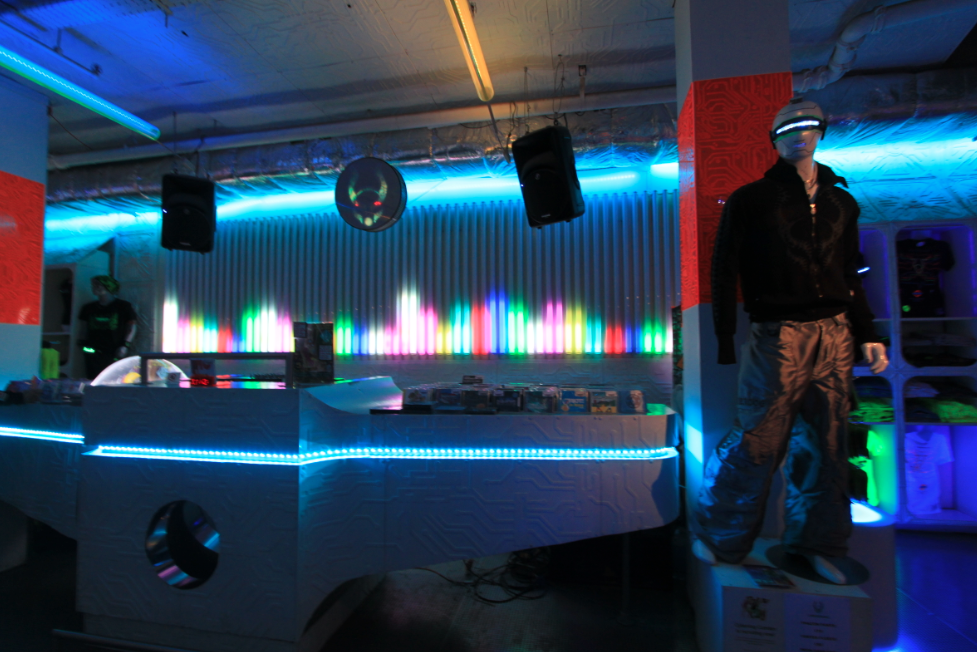 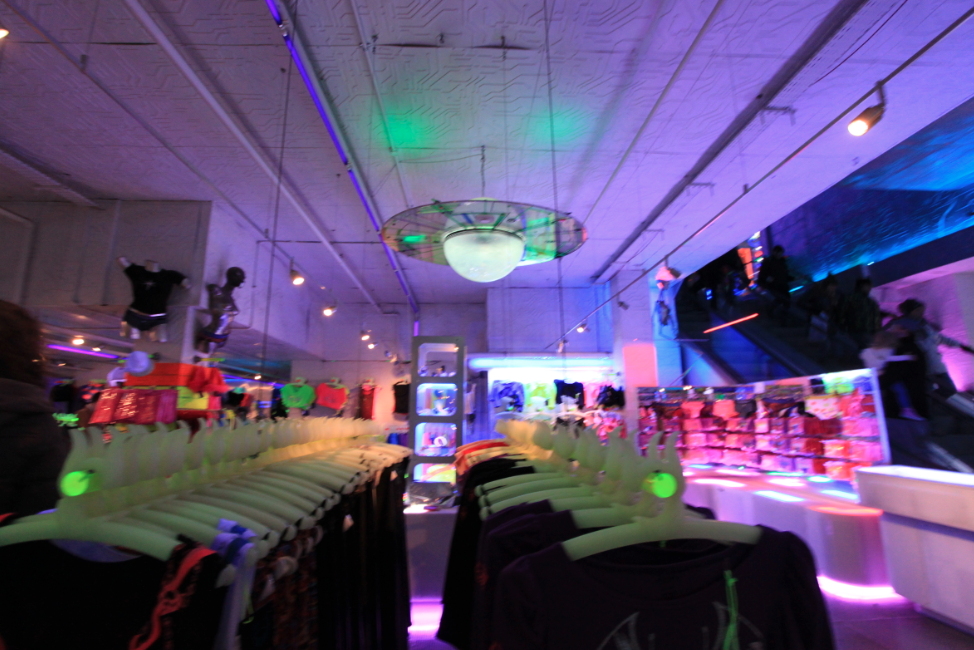 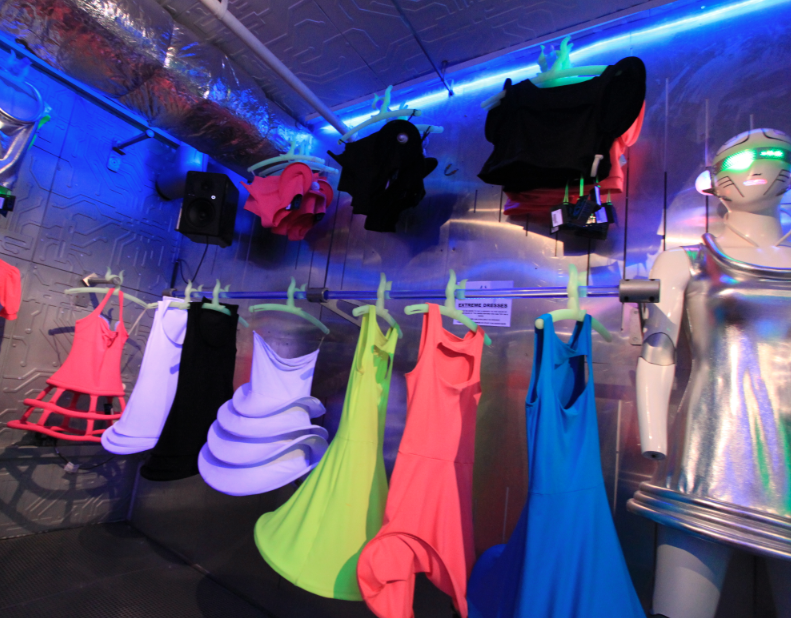 If they weren’t so expensive, I’d seriously consider rocking these galactic dresses.

After Cyberdog the rest of the shops just didn’t seem to compare, so what else could we do except stop for a cupcake? It was almost closing time and most of the flavors had been picked over at Mimi’s Cupcakes, but I managed to grab a winter fruit mini cupcake for just £1. The cake was much thicker than what I’m used to in the states, probably about the same consistency of cornbread, but it made this bite-sized treat perfectly fulfilling. The tart, fruity icing was like a thick buttercream, but it played a refreshing trick on my mind to make me think I was eating something lighter and more healthy. 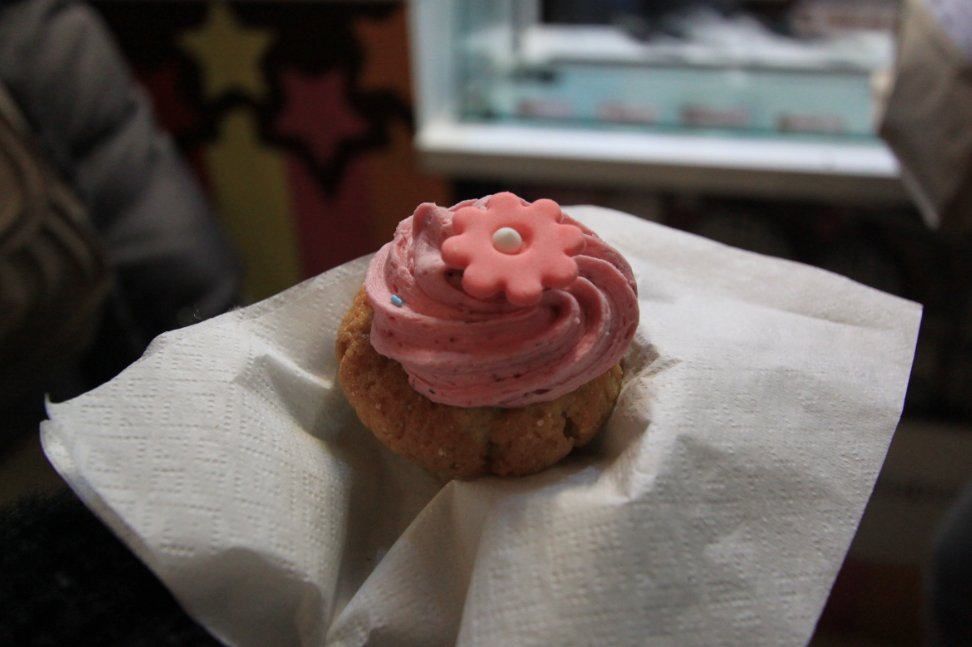 I think my favorite thing about Camden Market was the grunginess of it all. I feel more at home when I’m around people in hoodies with tattoos and piercings as opposed to those in collared shirts, sweaters, and perfectly pressed slacks like the other areas I’ve been to. And it wasn’t too in-your-face with people forcing us to buy stuff (except for the food market, but they were forcing us to taste their free samples so who can really complain?). Plus there truly seemed to be at least one shop for everyone there—even those of us who hate shopping. Definitely a good market worth getting lost in for a few hours, but you have to take the time to go deep inside to find where the shops really start to get good.