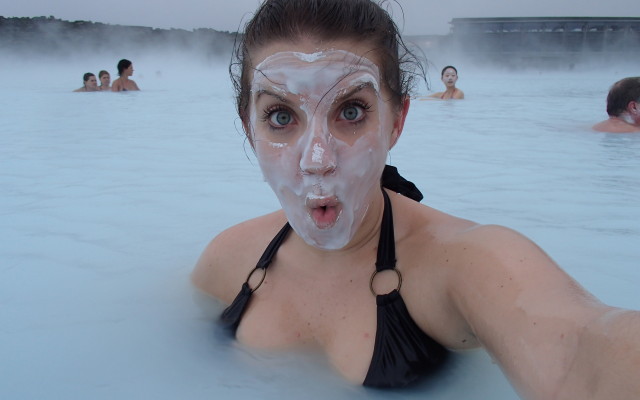 Or at least that’s what the guys kept saying. I’m a lady, and for all I know farts smell like roses and unicorn hugs, duh.

But really. Iceland smelled like a room full of forgotten hard boiled eggs that have been sitting in a pool of well water from the countryside (I’m from Ohio, yes I know what that smells like).

From the second we got off the bus at the Blue Lagoon my nostrils were stinging with the unmistakable scent of what could only be described as decaying chicken embryos. Or sulfur. Scientifically speaking, the entire country basically runs off of geothermal energy. So since the water is naturally heated by awesome volcanoes and hot springs beneath the Earth’s surface, it apparently has to balance out its “nature just blew your mind by being completely awesome” factor by containing a lot of sulfur. Or something like that, I don’t know. I went to art school not science school. But I do know that it’s a damn shame because after arriving from a long flight, driving through rocky paths comparable to what I’d imagine the surface of the moon to look like, and coming across the milky blue water of the lagoon builds anticipation like whoa. But once you open the car door and inhale that first whiff of putrid egg you might second guess stripping down to your skivvies and soaking in the cloudy sea of farts. Suddenly this once-welcoming water seems like a glowing radioactive pit of sewage.

Aside from the Blue Lagoon, there’s a very likely chance you’ll notice the sulfuric smell every time you turn on the hot water. You go in for a shower, the room fills up with steamy farts (but on the plus side the smell doesn’t linger on your skin afterwards). You order tea or coffee, you’re sipping on diluted farts (the flavor definitely masks the scent, but it’s still there). Hell, even when you use cold water it’s still noticeable but not nearly as bad. When you brush your teeth, you’re rinsing your mouth with fart water.

Oh Mother Nature, you sly bitch. Giving us something as beautiful as Iceland to look at but making it smell like the deepest pits of an overflowing outhouse during a summer music festival.

Okay it wasn’t that bad, really. If you’re lucky like me you’ll get used to it pretty quickly. And it’s perfectly safe to drink, no tummy troubles here! In fact I was told by locals that it’s some of the cleanest drinking water in the world. So as I’m clearly exaggerating about the scent, don’t let any of that stop you from visiting. Go embrace the land of farts with open eyes and a closed nose. It really is a gorgeously unique country that’s worth every sulfuric whiff you take in—and then some.