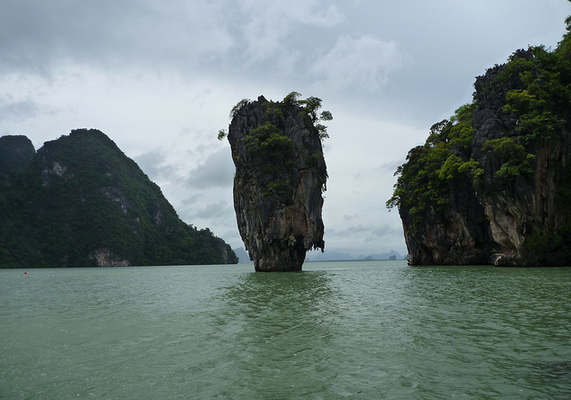 You know those touristy things that you really don’t want to do, but you kind of feel like you have to? For me, visiting James Bond Island was one of them. It just sounded like another overpriced, overcrowded outing, especially since I’ve never seen any of the movies. (I should confess now that I’ve actually never really seen ANY movies. I didn’t even realize that I actually liked movies until about 2007, and by then I already had a pretty faithful time-wasting commitment to the internet.)

I paid about $75 USD for yet another day tour from some random company through my hotel. Unfortunately the entire day was quite underwhelming. At most it was nothing more than a sightseeing tour for lazy people.

My tour van left for Phang Nga Bay around 8am with an Australian honeymooning couple (again). On the way we stopped at Monkey Temple (again), and while we were inside it started pouring down rain (again). Like, couldn’t-see-the-monkey-flying-towards-your-face rain. Luckily we didn’t stay long before continuing on for some sea-canoeing. 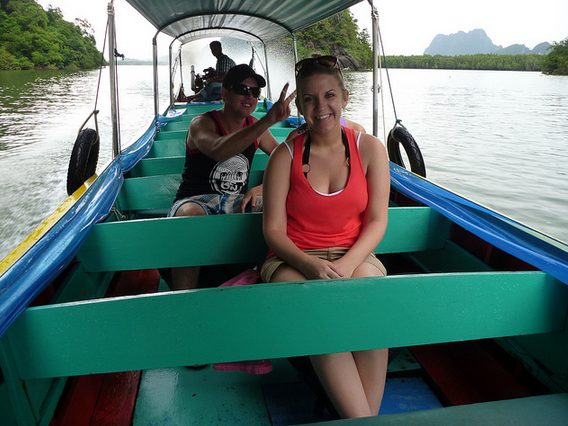 Lovely trip mates. But I crashed their honeymoon, so the guy decided to photobomb me.

I was SUPER excited for the sea-canoeing. I mean it’s basically kayaking, right? How sweet was it going be to paddle through limestone rocks and get lost in hidden caves? Turns out, not that fun when you’re not the one doing the paddling. Yeah. They wouldn’t let me paddle. I even tried to bribe them to get my own raft but they made me jump into one with a guide and stick close to the other groups. Ughhhhhhh. So boring. It wasn’t even like I could go on an epic photo-taking mission either because the weather was horrible and all of the shots looked like shit. Don’t get me wrong, I’m still glad I got to see all of this, I just think that of all the days I spent in Phuket I really wish the weather would’ve cleared up on this day—at least for an hour or so. The biggest reason I was so excited about Thailand was to see those limestones jutting out of the turquoise waters and into the bright blue sky. Instead they were hidden in a hazy sky, and they just lacked that wow factor that I’d seen in so many great photographs. 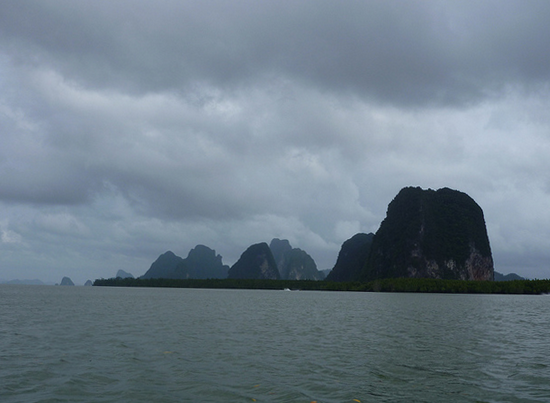 I wish this was my back yard 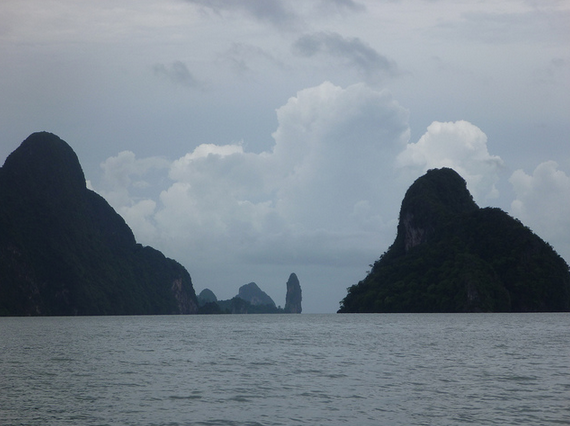 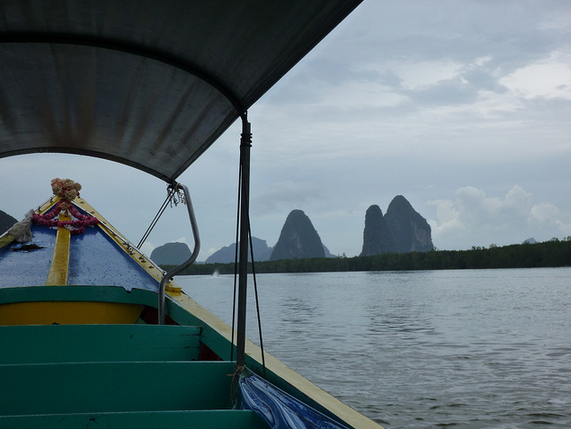 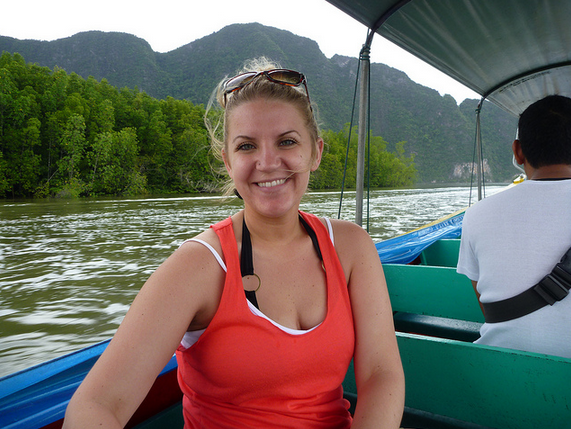 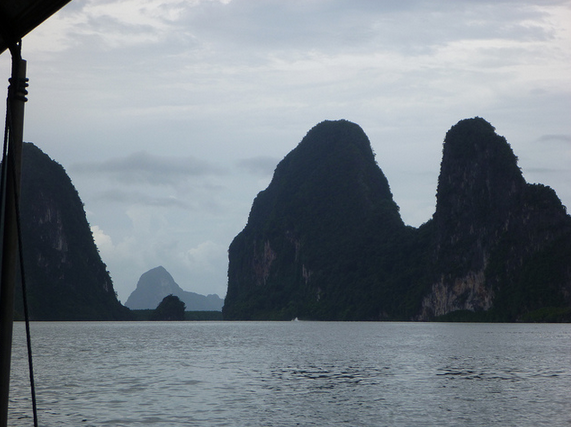 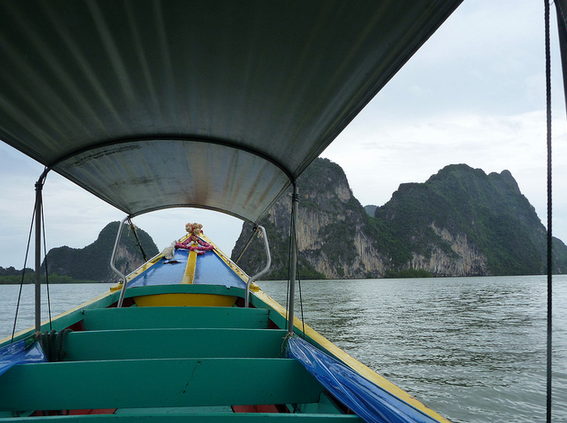 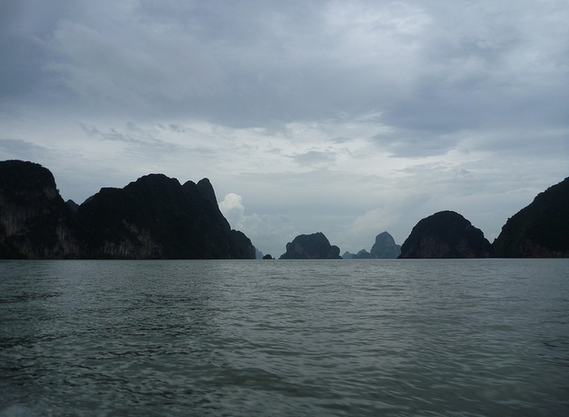 At one point I had to lay flat in the raft so we could make it under this low-lying limestone to make it into the cave. A wave came along and I definitely hit a few jagged edges, but no damage. 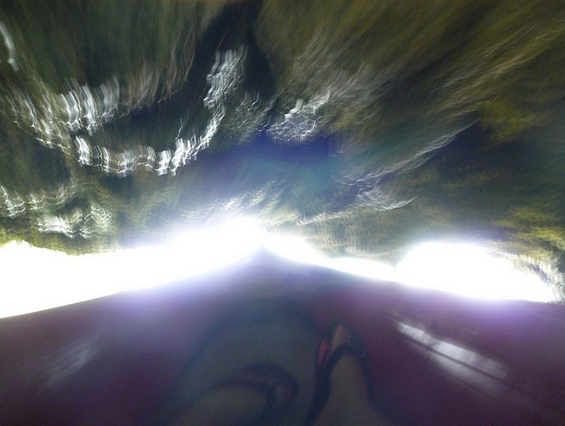 Lying on my back, trying to snap a pic on the way out of the cave 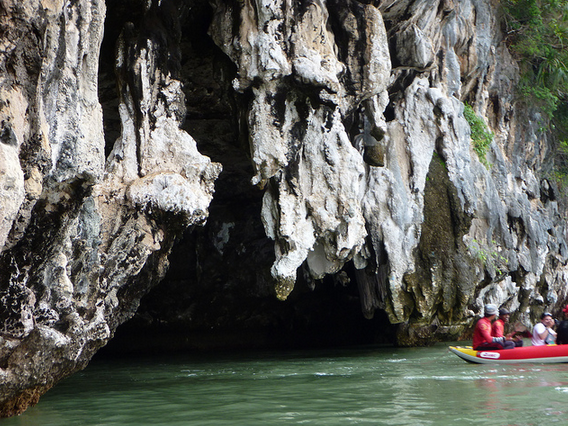 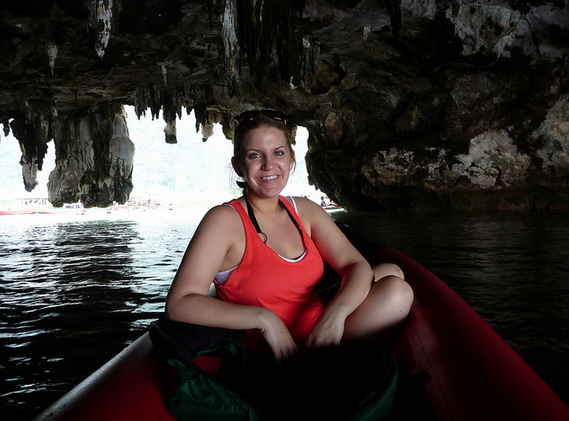 Inside a cave full of bats and tourists 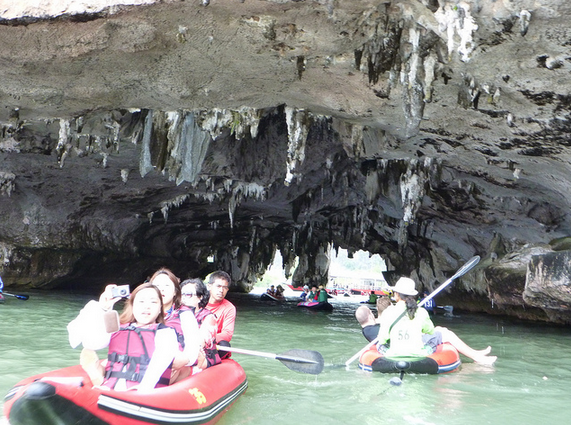 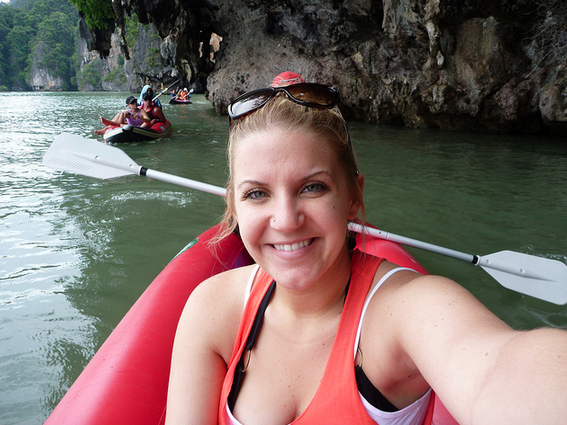 I got a paddle lodged in my head. 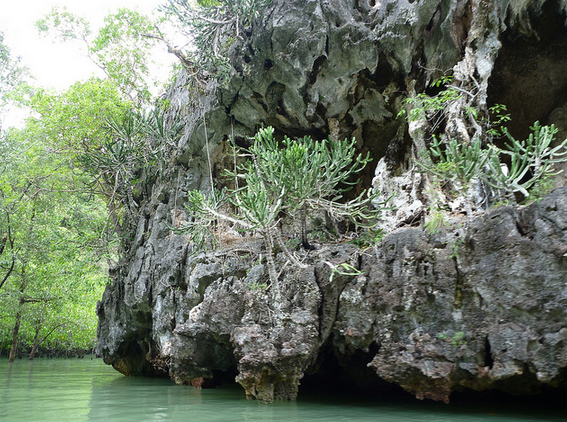 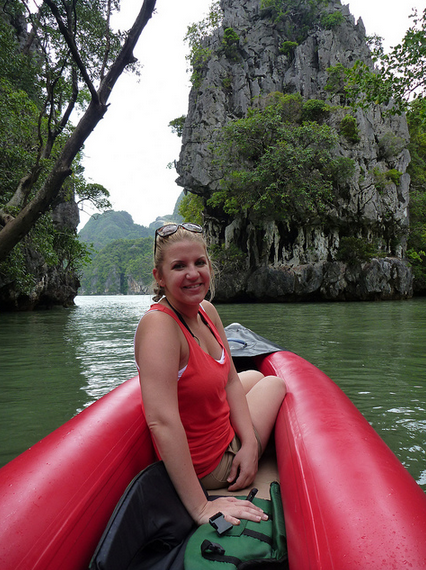 After tipping my tour guy 50 Baht (all of the other tourists were doing so, right in the open. I felt obligated) we headed on to Khao Tapu, better known as James Bond Island, where The Man With The Golden Gun was filmed. Having never seen the movie, my “that’s cool” moment lasted about .6 seconds. But the tourists. Oh my God. Sure that giant rock looks all secluded and shit in the pictures. But photographers really need to turn around and take a snap of the spot they were standing to get that shot. And go figure, it’s just like another gigantic flea market with EVERYBODY trying to sell you something! 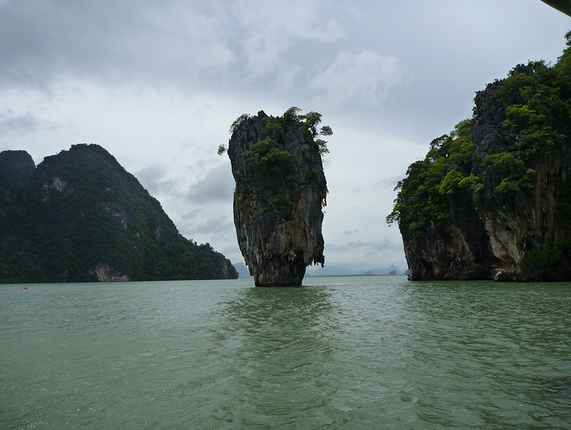 Would’ve been so much prettier with a blue sky 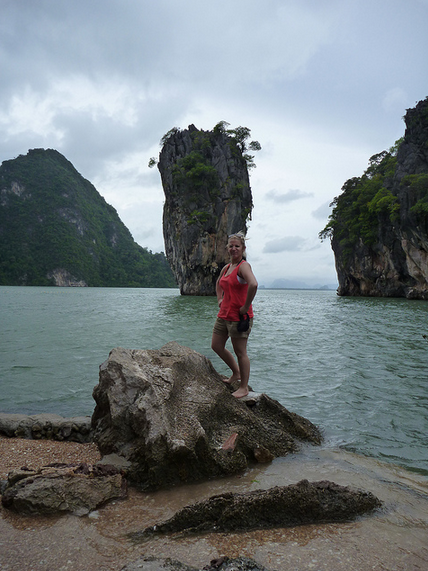 This was my half-assed Captain Morgan pose. 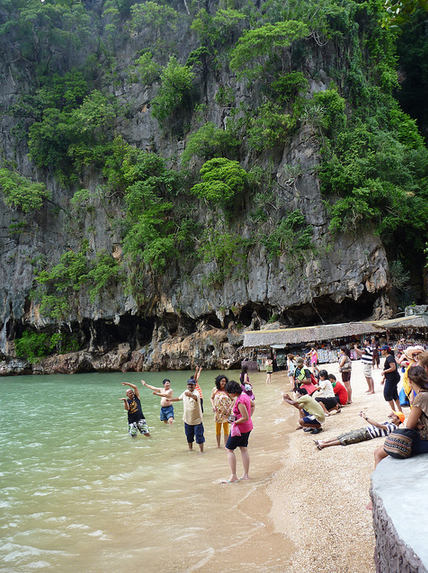 From the other side of the lens: the side they don’t show you in all of those pretty travel books

Thirty minutes later I used the squat toilet and rinsed myself with a probably super clean communal cup of water before jumping back into the longboat. The ride over for lunch was probably the best part of the day, and not just because I love food. We cruised around the bay until reaching Koh Panyi, which oddly reminded me of  a neighborhood from District 9 (yes I’ve seen it, it came out after I was hip to movies, in 2009). The guide informed us that Koh Panyi was built as a fishing village in the eighteenth century by a group of nomadic fishermen. Back then people of non-Thai descent weren’t allowed to own land so they got crafty and built up a village on stilts. Since then it’s become a main lunch stop on these Phang Nga Bay tours, but it didn’t feel very touristy at all outside of the restaurant. It was actually quite fascinating to see these people emerge from their houses over the water. I couldn’t help but wonder if they ever get seasick. 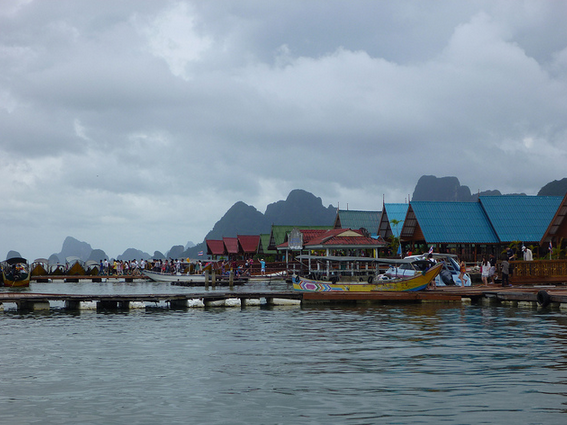 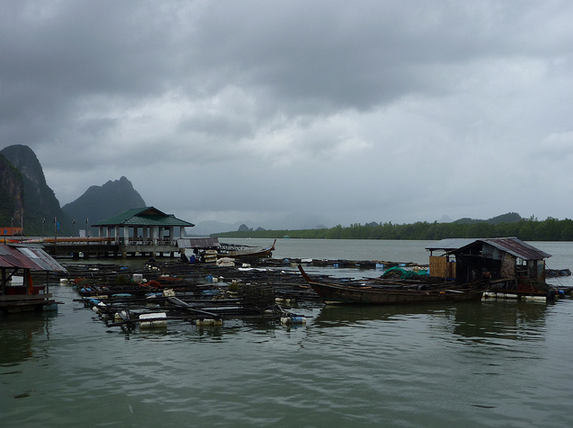 I question the stability of these docks. 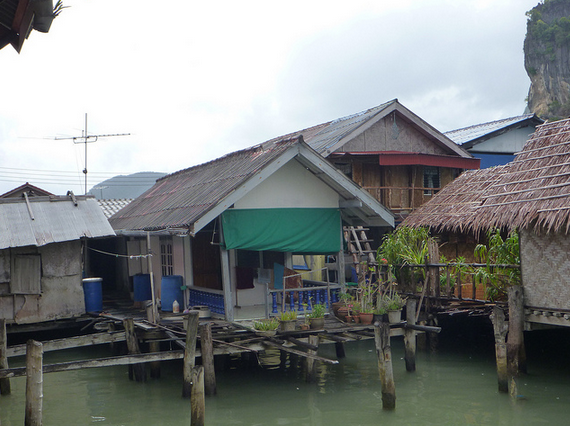 How bad would it suck to live here and then find out that you’re a sleepwalker? 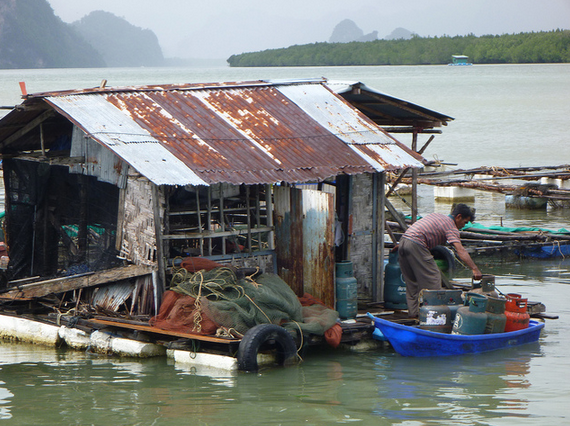 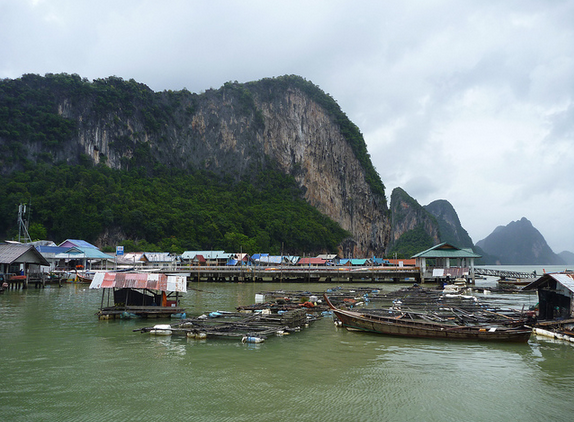 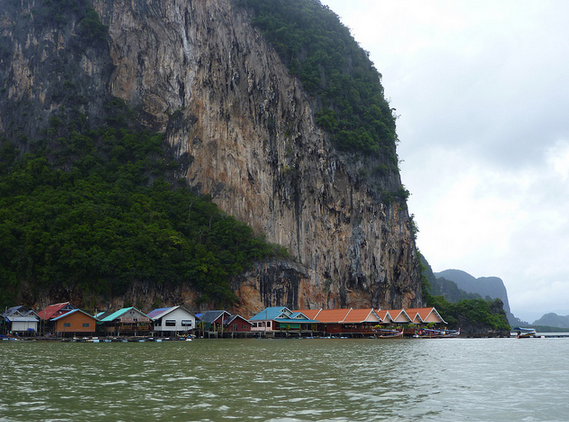 I’ve heard that you can find self-paddle tours out in Phang Nga Bay. I highly recommend doing one of those instead. And if you’re hoping for some awesome pics, I’d go on a sunny day and possibly even closer to sunrise or sunset. Other than that, if James Bond Island is a must then make it a quick must, but definitely set aside some time to explore Koh Panyi.

Getting Down and Dirty on ATVs in Thailand

Every day in Bangkok I found myself chugging endless amounts of water while wandering around in the hazy, humid streets...
Continue Reading