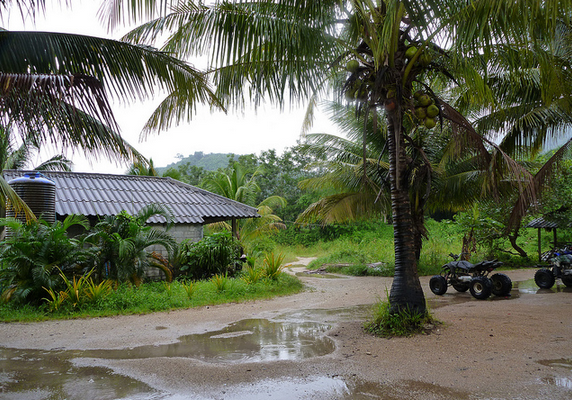 Every day in Bangkok I found myself chugging endless amounts of water while wandering around in the hazy, humid streets wondering why I was sweating so much more than everybody else. I could hardly wait to spend five days soaking up the sun on Patong Beach. Unfortunately Mother Nature had other plans.

If there is one thing I could say about my time in Phuket during rainy season it’s that it was in fact, rainy. And I don’t mean a tropical shower here and there, I mean downpours, all the time. It became clear very quickly that I would have very little time to work on my tan, so I started looking for a plan B. So one grey, dreary day I figured I’d embrace the wetness and go on a white water rafting and ATV riding tour from my hotel.

I don’t usually do tours, but since my aimless wandering abilities were severely hindered by the weather I figured it couldn’t hurt to get out and be social. The plan was to go rafting during the rainy morning hours, have lunch, then hopefully the rain would let up before it was time to go four wheeling. The tour bus picked me up in a car full of honeymooners—a type of crowd I was becoming all too familiar with. Except this tour actually had one other lone traveler besides myself! Yes, we hung out.

We stopped at Monkey Temple, which is basically a cave with monkeys going bananas for bananas out front. Packs of tourists were feeding them as they hissed, screamed, and fought each other, while climbing up people to try and steal something for ransom of more bananas. Frankly I was a little nervous about some rabid monkey attacking my face so I opted to keep my distance from the ones that looked particularly crazy. 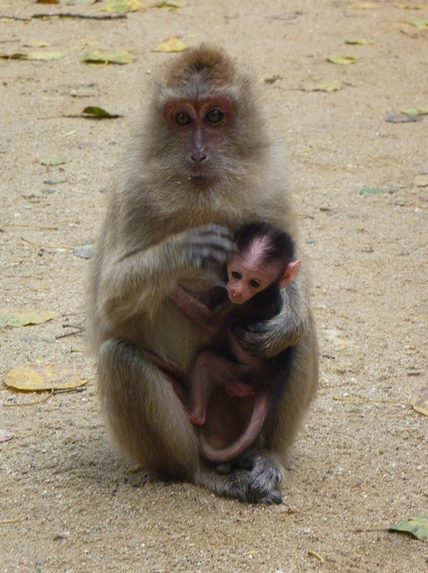 Mama and her baby 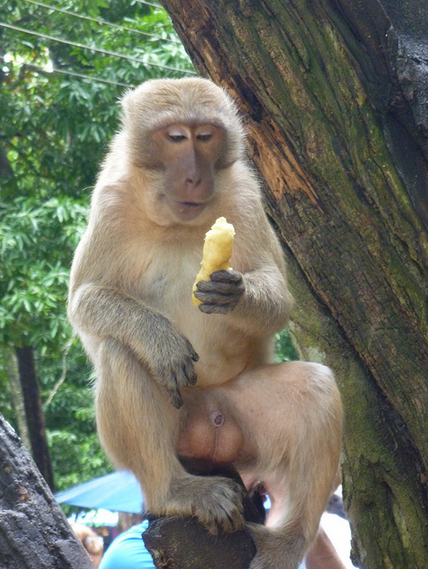 His face says “Duuuuurrrr, look at this banana!” but his balls say “look at us!” 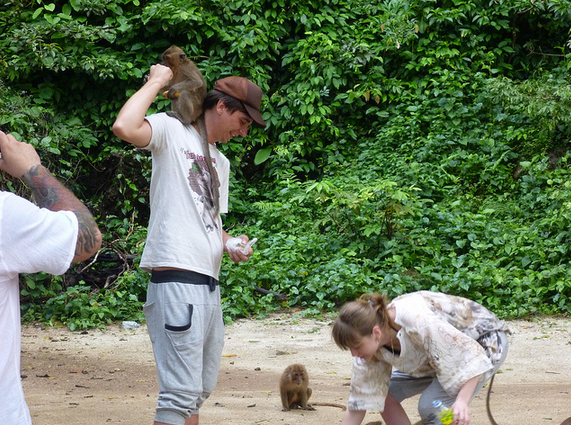 After realizing that monkeys are angry little scavengers, we drove out into the  jungle for my first white water rafting experience. I figured Thailand was as good a place as any to embrace the wet weather and try rafting. I had no idea what I was supposed to wear so I followed suit with the other girl in my raft and stripped down to my tank top and bikini bottoms. The first rapid proved what a stupid idea this was. I got a huge wedgie, exposing my bare white ass cheek to everyone in my raft and behind me. And I was too busy trying not to lose my paddle or fly out face first onto a rock to pick it out. And that’s not even the worst part—the hits had pushed me back onto the guy behind me so his knee was nearly up my butt with every bump. Yeah, not cute. 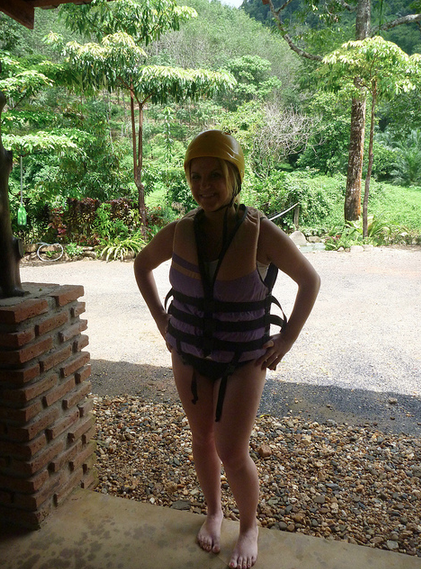 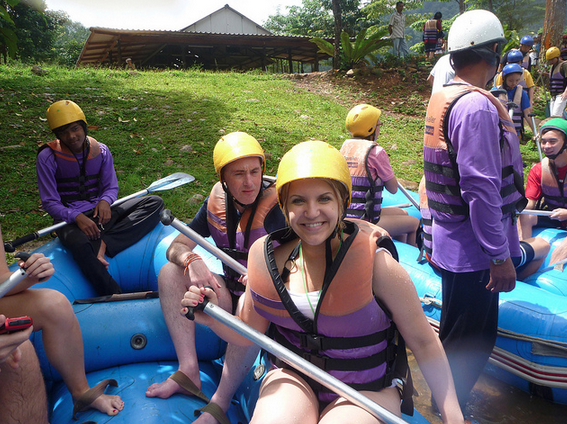 Could my head be any bigger? 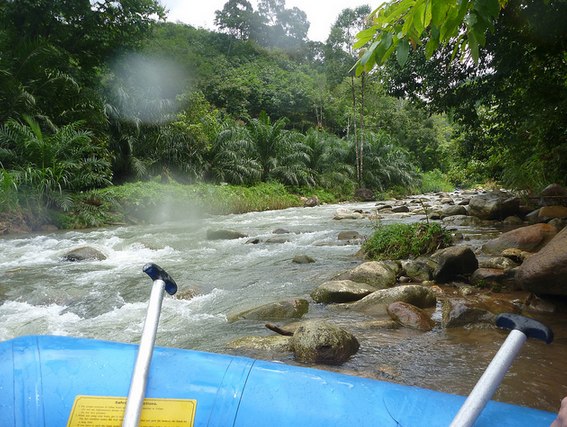 Waiting for the dam to release

At first I was too focused on staying in the raft and recovering from my wardrobe malfunction to realize that I had transformed my body into a stiff block of cement basically just waiting for disaster. Then I realized I need to loosen up a bit and move my body WITH the raft rather than be violently surprised whenever we hit a rapid. But this wasn’t until after I hit the guide in the face with my paddle. It only took me three minutes to violate the one rule of keeping your oar in the water. And here I was worried that I was going to lose the thing. 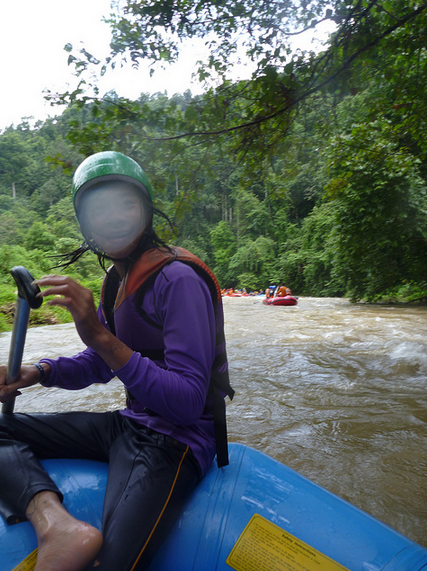 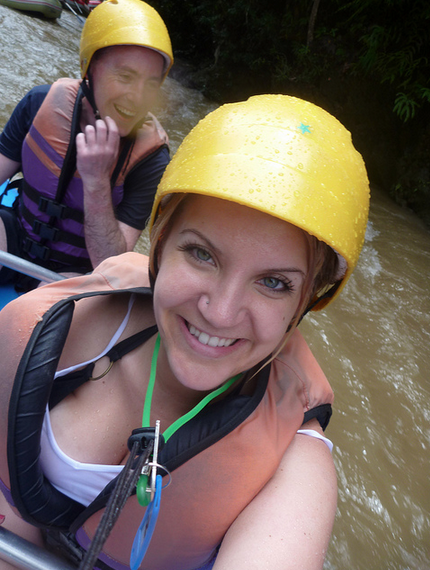 Sorry for the ass in your face, guy 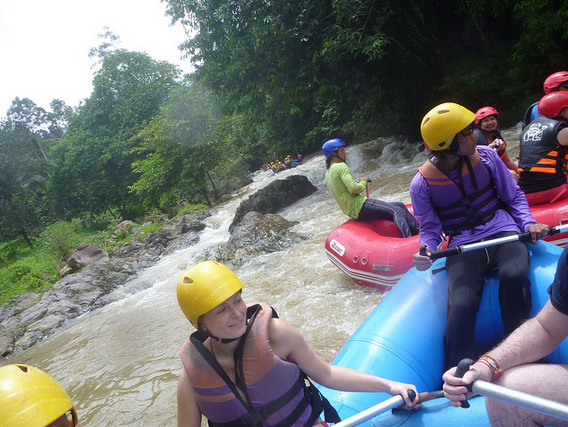 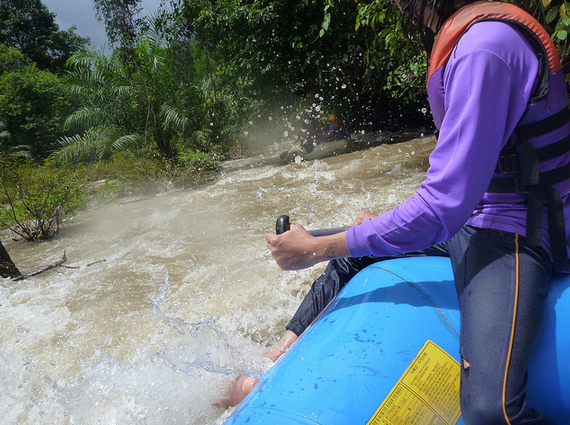 Trying, and failing, to get a decent action shot

Miraculously I got the hang of it about five minutes in and made it down the river without falling out of the raft. But at the end I was ready to get into some dry clothes. But Mother Nature took that as a cue to dump more rain on us, monsoon style. We raced through the winding mountain roads in the bed of a canopied truck to eat some lunch and hope for the rain to let up. Of course while all 30 of us were eating they played the highlight reel from the rafting—so everyone got to see me nearly kill the instructor all over again. 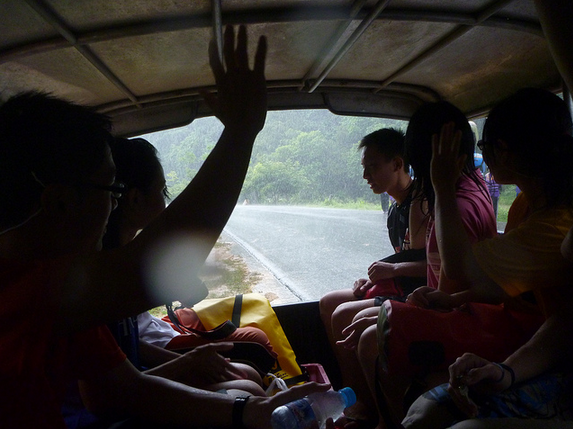 Seeking refuge from the rain with a group from Singapore 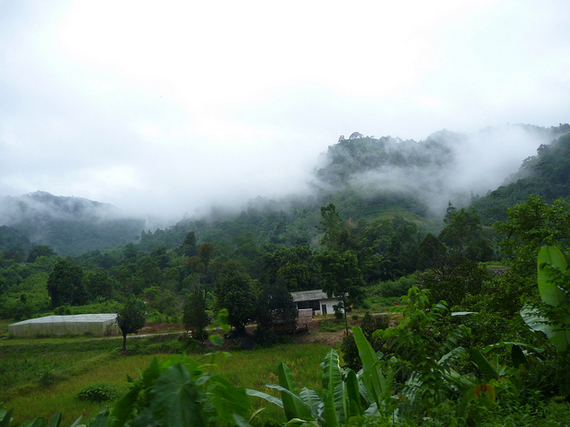 Nothing to complain about on this rainy drive

The rain never let up so I decided to just embrace the fact that I was going to get wet, and hopped on the four wheeler. The jungle looked perfect. The clouds were hanging low through the mountains and trees. There was mud everywhere. And the warm rain dripped from the thick canopies of leaves. Suddenly I was glad that I’d chosen to go four wheeling on a rainy day. Once I accepted the fact that I was going to get wet and muddy I had the time of my life. I was a little cautious when we first started on the wide open flat paths, but five minutes in I was feeling like a bit of a badass and I started flooring it up steep hills and off-road paths. We climbed up muddy slopes while dodging tree branches and steering into the mud puddles. We finally got to this valley where we drove through about a foot of water when I decided to start a water fight with the other single guy I’d been torturing all day (yes the same poor guy I had my bare ass on just hours earlier). 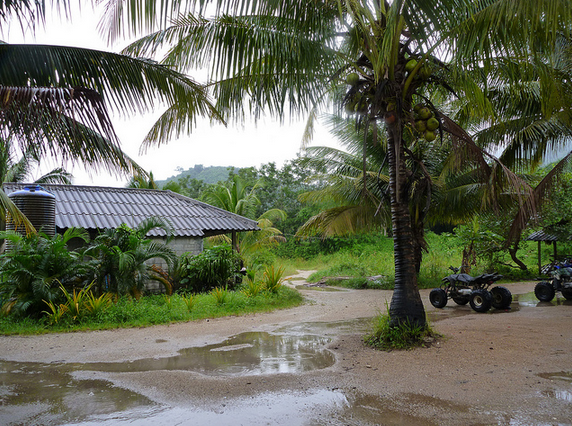 Why is this not my back yard? 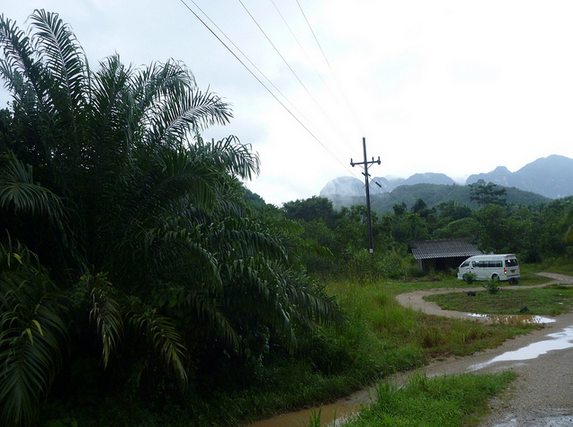 Riding out to the jungle 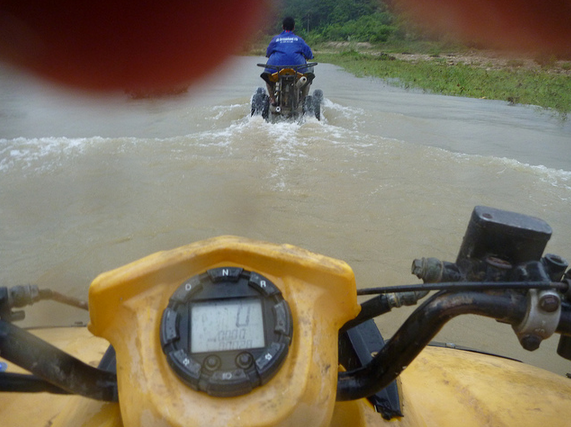 Trying to stop for a pic of the water without letting the guy behind me catch up, because I’m competitive like that 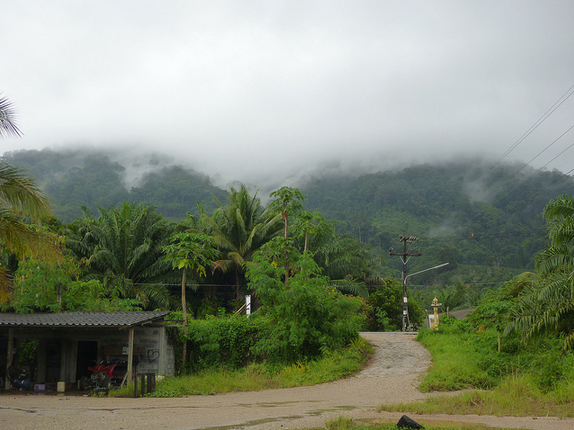 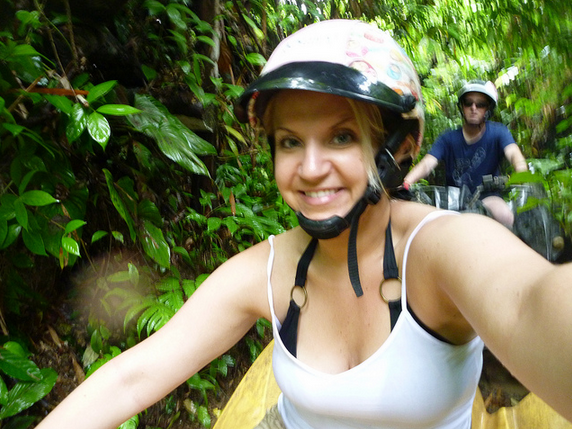 When we finished I was soaked and covered head to toe in mud—but of course my camera died. I was ready for more but we had to rinse and dry off for the two hour trek back to our hotels. Sigh.

I really cannot put into words how amazing it felt to just say fuck it and enjoy getting messy for a change. I don’t think I would’ve had as much fun going four wheeling or rafting on a clear, sunny day. Lesson learned; don’t let shitty weather stop you from having a blast. Just figure out how to use it to your advantage.

15 Things I Wish I’d Known Before Traveling to Thailand

I just got back from my biggest trip to date, and if I had to sum it up in one...
Continue Reading

I’m a woman who hates shopping. In fact, I actually loathe the idea of pushing my way through crowded stores...
Continue Reading