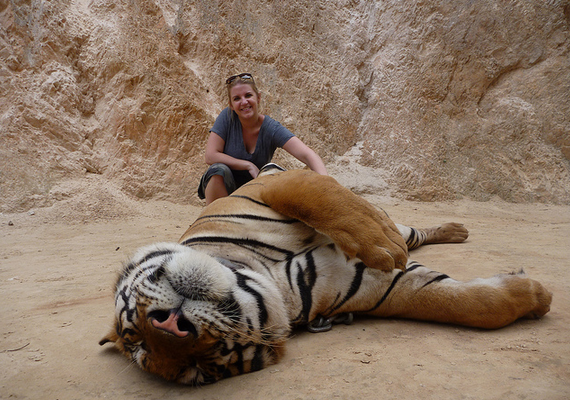 In case you weren’t aware, tigers are massively huge, strong, and mildly terrifying cats. So how could you not want to cuddle up with one?

Getting face to face with a tiger has been high up on my to-do list for a long time. Probably ever since I found myself sitting front row to a White Siberian Tiger that magically appeared in front of me in a plume of smoke at a Seigfried and Roy show over 15 years ago. So of course I’m going to go spend the day feeding, washing, and playing with them while I’m 10,000 miles from home. Duh.

I actually read a lot of reviews before deciding to make the trip out to Tiger Temple in Kanchanaburi. Yes I wanted to see some tigers, but what fun would they be if they were all drugged up and sleeping all day? Was it really just a refuge of mistreated animals that were ready to seek revenge on an unsuspecting blonde tourist the second she turned her back? Or were these reviews all just from angry hippies who can’t even appreciate a good steak?

I decided to go for it. Partially because it was a chance to escape the Bangkok heat, and partially because, well, there were tigers. Tiger Temple was like a big, wide open dirt zoo. With monks. And the drive entrance was none other than a gigantic tiger mouth, which sadly I didn’t get a decent photo of. There were some very curious goats and deer wandering around, apparently oblivious to the fact that they could be lunch at any minute.

I booked through Tiger Temple Thailand and paid about $160 USD for the entire day which included round trip private transportation from my hotel, a tour of the floating market, a quick stop at the Don-Rak War Cemetery and then the River Kwai Bridge for lunch, the chance to walk, feed, bathe, and play with the tigers, get my picture taken with more tigers, and ride an elephant through the backcountry. Totally worth it.

It was all very orderly and systematic which is the exact thing I hate about organized tours. But we’re dealing with 500 pound animals here, it couldn’t really have been full blown chaos like Disneyland. We had to have a worker with us at all times, and we weren’t allowed to go in front of the tiger or pet its head. A lot of the bigger cats were sleepy, but it was mid-afternoon and hot as hell. I was kind of sleepy myself. They didn’t seem drugged up, they just seemed like they were relaxing and trying to stay cool. But the younger ones were let loose to play with us in the water, and they definitely were not drugged up.

I’m pretty sure my photos can tell a much better story than my words now, so here goes. 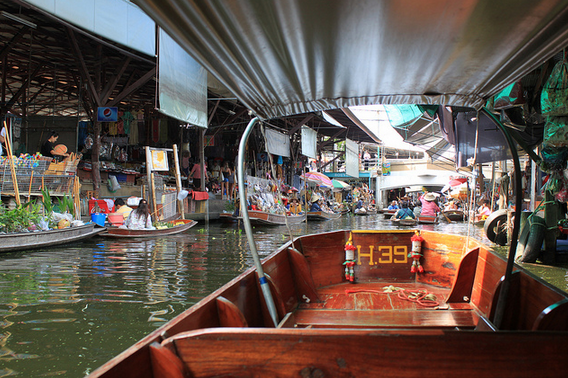 On a longboat at the Damnoen Suduak Floating Market, which is enough of an experience for an entirely different blog post. 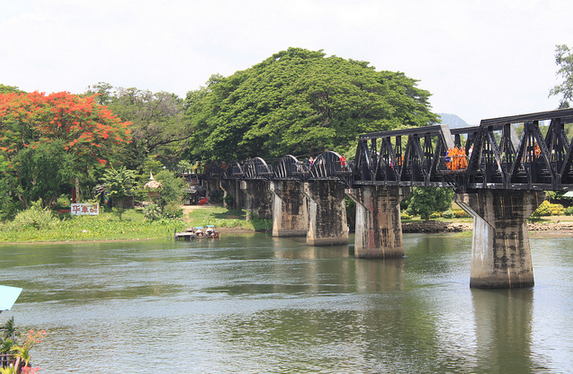 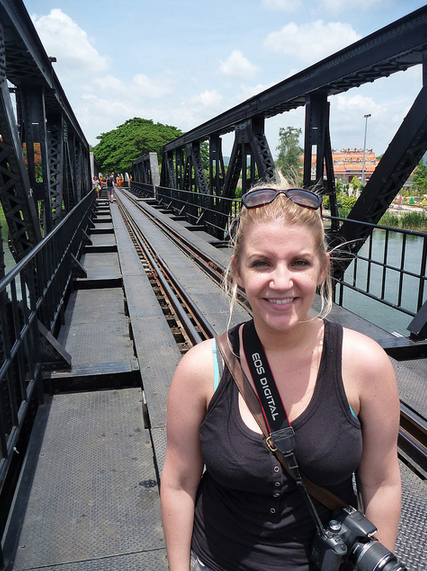 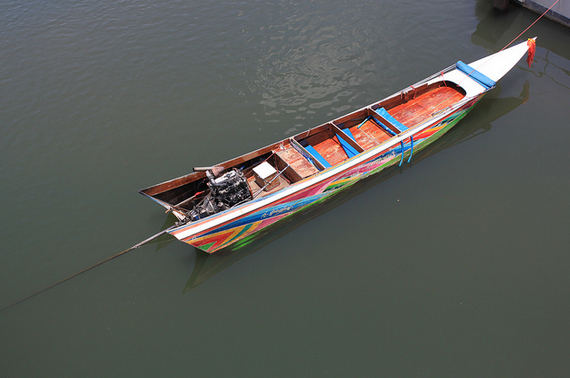 An infamous Thai longboat sitting in the river 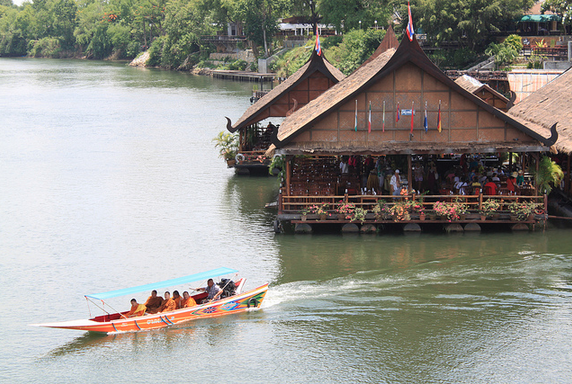 The place where we had lunch had segregated seating: tourists in the back, locals in the front 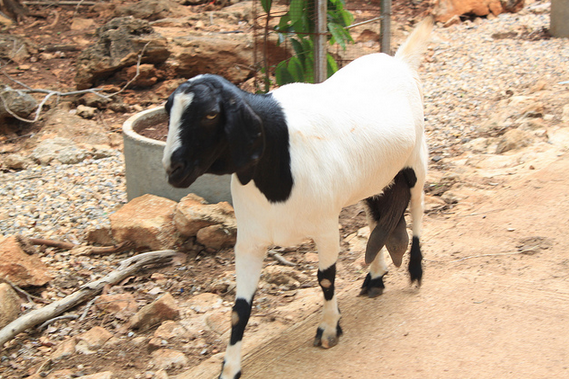 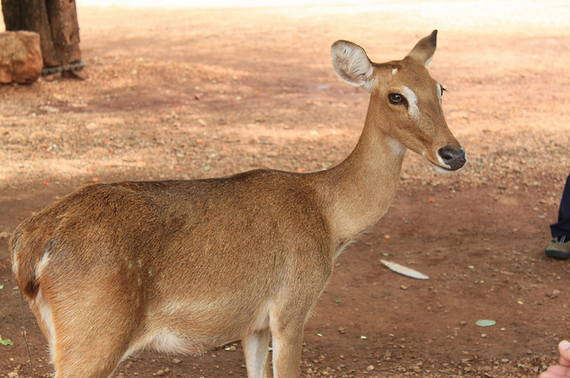 Oh, deer. Is that dinner? 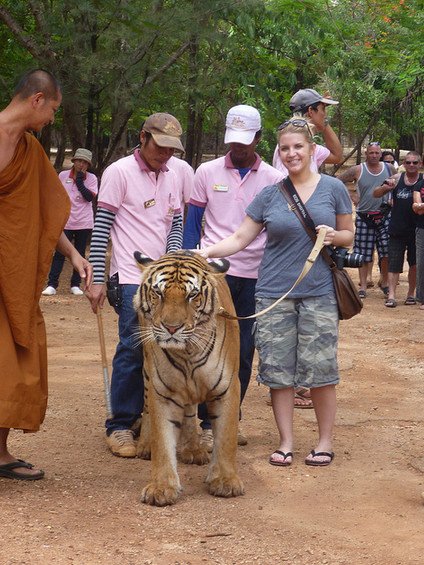 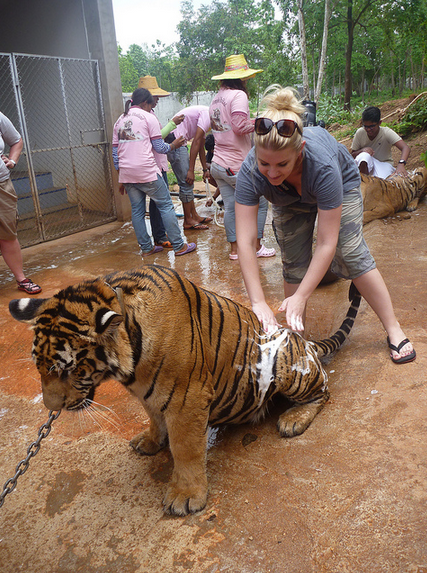 I wonder how much dandruff these guys get from being washed all day long? 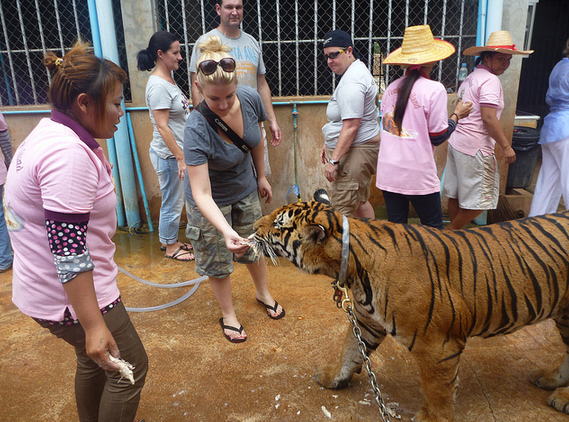 Okay feeding the tigers slimy chicken was a little intimidating 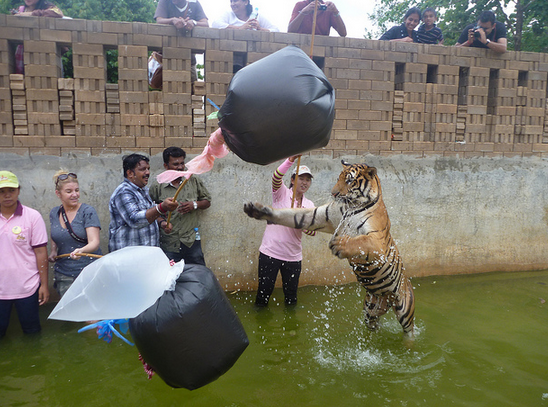 Shortly after this photo was taken this tiger clawed a whole in my bag and put an end to my fun. Jerk. 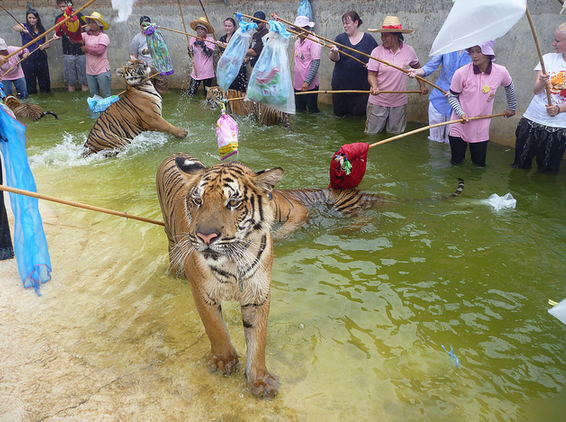 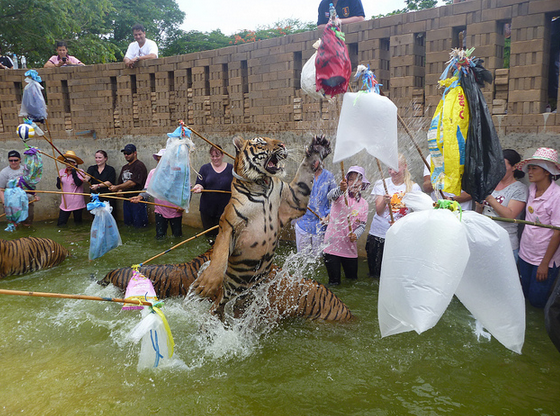 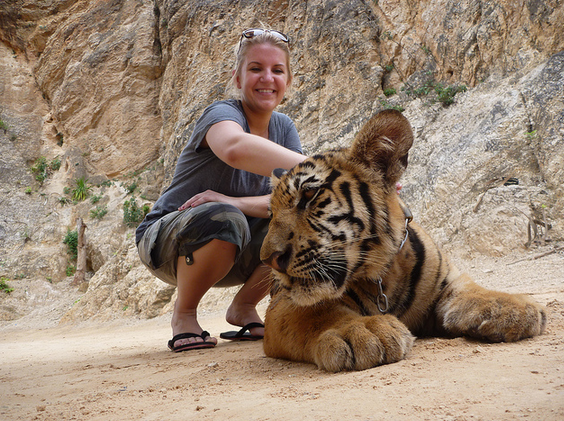 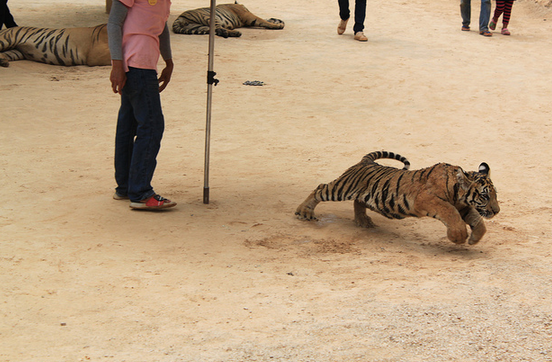 this was him just two minutes before, trying to make a getaway. 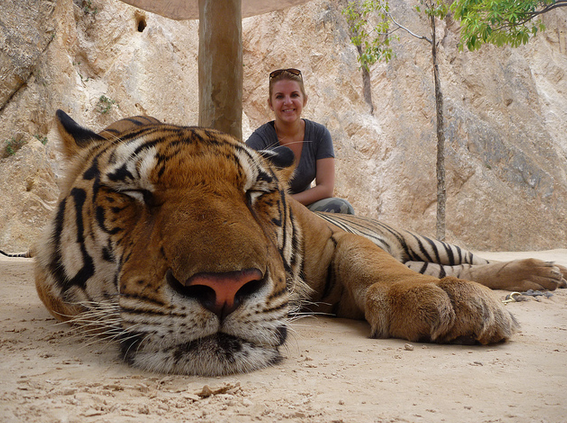 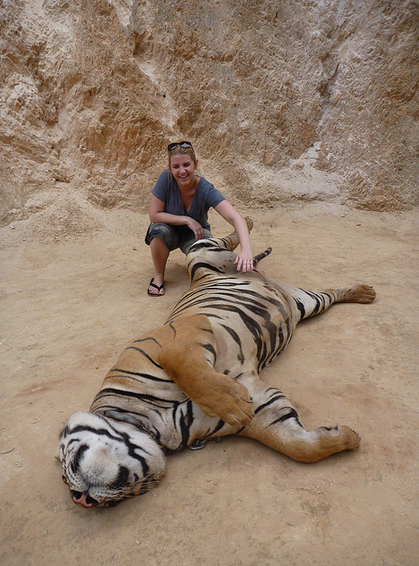 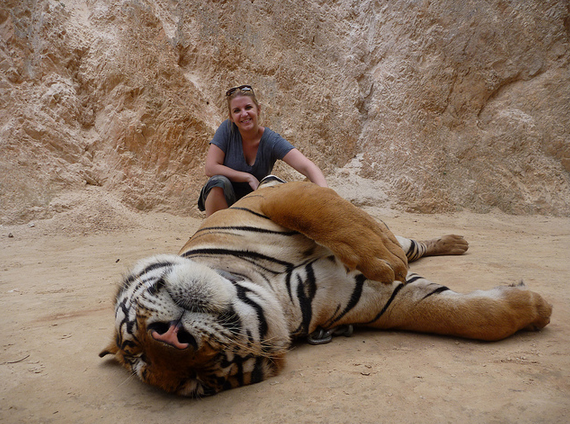 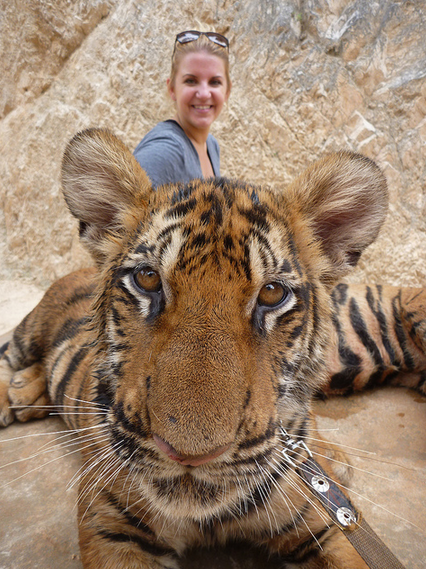 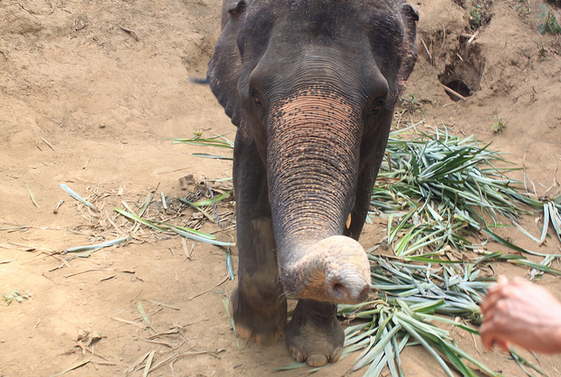 About a 20 minute drive from Tiger Temple we went to ride elephants. I was sitting on an elephant while he ate when this snout reached up and poked me in the back. 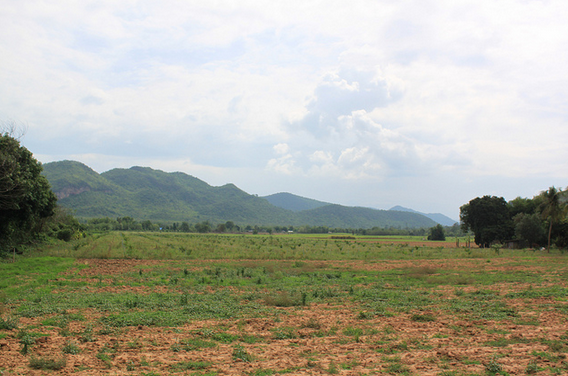 Couldn’t have found a better place to do some elephant trekking. 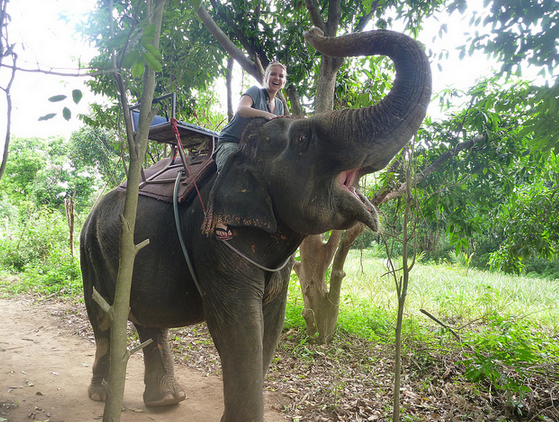 The guide told me to put my hand down on the elephant’s forehead, but didn’t tell me that he would raise his trunk like that. I almost fell off. And I did drop a shoe. 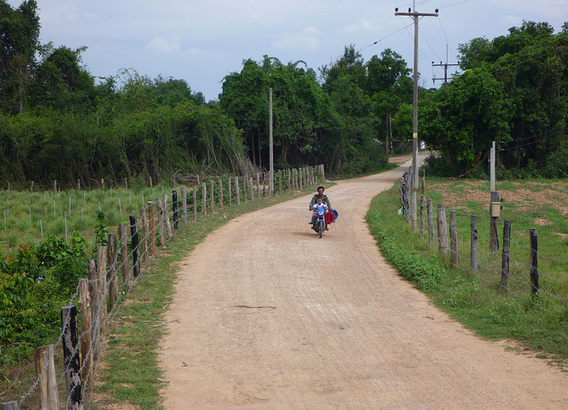 Passing locals as we trekked through the backcountry. We exchanged waves like I was in a parade, it was awesome. 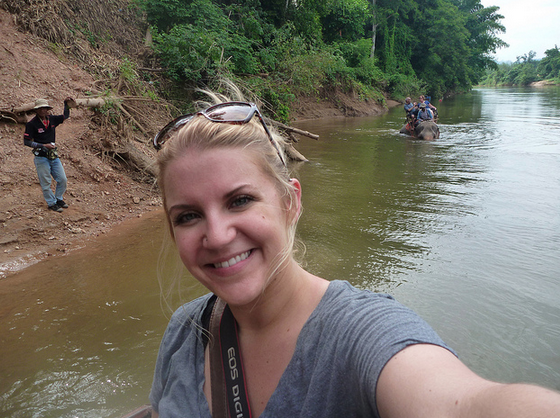 I know elephants are smart, but mine kept forgetting to breathe underwater. We had to keep tapping his head and say “come up, come up!” before he would lift his trunk out and take a breath. Yes, I got sprayed several times. 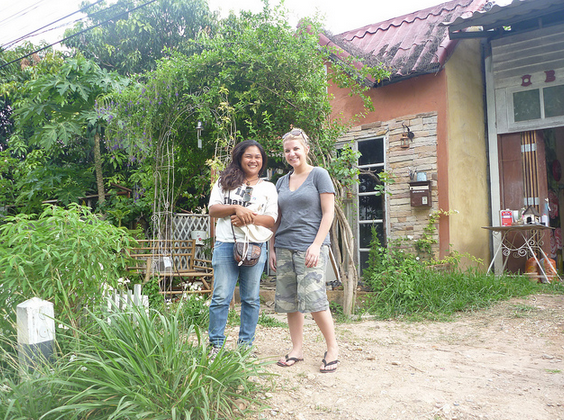 My amazing tour guide. I wish I would’ve written down her name because I know I’d butcher it if I even TRIED to spell it out. But she was an amazingly sweet person who was genuinely concerned with teaching me and making sure I had an awesome experience. Which I definitely did. We took this photo outside of her home before I headed back to Bangkok. 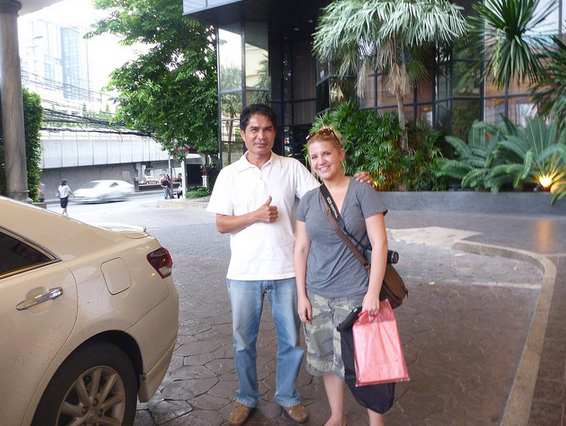 My personal driver for the day. Yet again another incredibly nice person that I actually didn’t mind the small talk with. Note to self: WRITE DOWN NAMES FROM NOW ON!

Bangkok: The City of Contradictions

Bangkok is unlike any city I've ever been to before. And not just because it's in Asia. It's intense, with...
Continue Reading