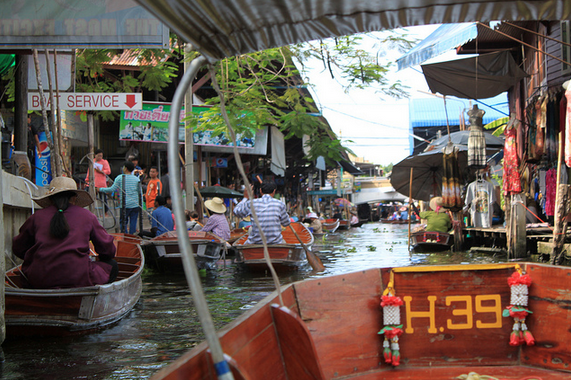 I’m a woman who hates shopping. In fact, I actually loathe the idea of pushing my way through crowded stores and digging through stacks of crap just to find one thing I actually want. Plus I’m extremely frugal, so if it’s not an item necessary for comfort or survival, it’s usually gotta be pretty kickass to get me to part with my beloved money. Even when I’m traveling the only souvenirs I usually bring back are things I pick up at the airport with my leftover cash in an attempt to avoid another currency conversion. So why in the hell did I go to the Damnoen Saduak Floating Market in Thailand? 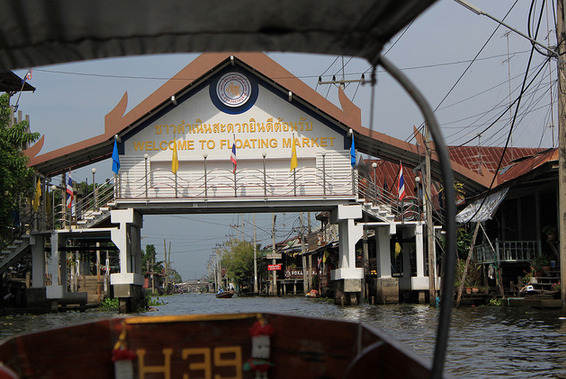 Welcome to the biggest tourist trap in Thailand

A little over an hour outside of Bangkok by car, this market appears to exist almost entirely for tourists. I jumped into a narrow longboat with a Thai man and a roaring motor in the back. We sped our way through narrow canals of thick green plants and houses on stilts before reaching the market.

Cruising through the canals, which are clearly not no-wake zones

When we finally got there I was a little surprised. I was expecting to see local Thai people going about their daily exchanges of fruits and vegetables, bartering, and cooking up soups, rice, and meat. But instead it was a congested slew of tourists in longboats led by aging Thai women, being accosted from pushy sellers with unoriginal souvenirs. Guess I should’ve done a bit more research.

There were hoards of boats full of tourists navigating through the canals under the shade of tarps. I use the word tarp loosely, as they’re mostly riddled with holes or simply just pieces of rope holding nets. Throngs of shops selling clothes, paintings, and keepsakes spilled out into boats selling fruity refreshments and hats. More than once we had to brush elbows with other tourists touting coconuts and SLRs. 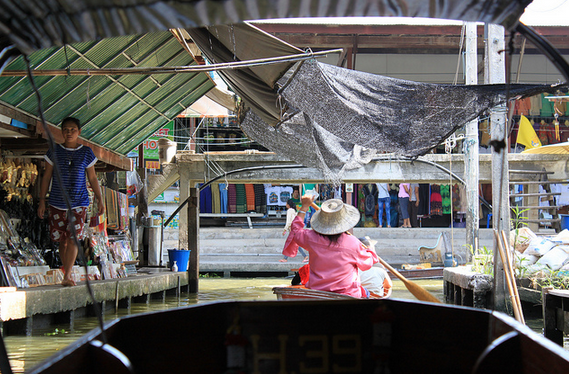 The men had motors, the women had paddles 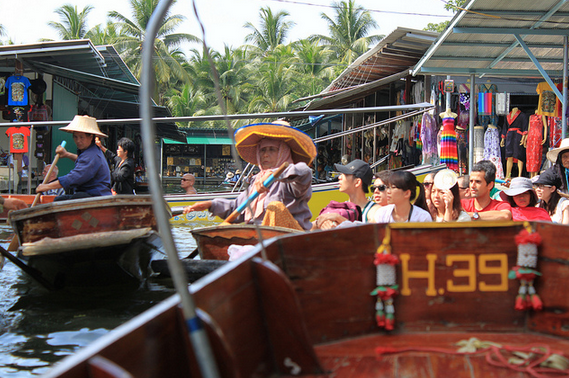 I was intrigued by the woman paddling this boat, but then the guy in the middle caught my attention… 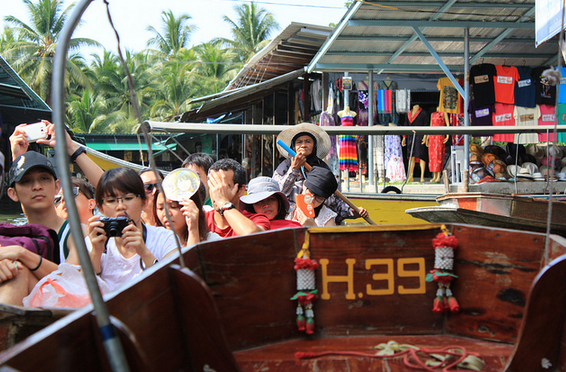 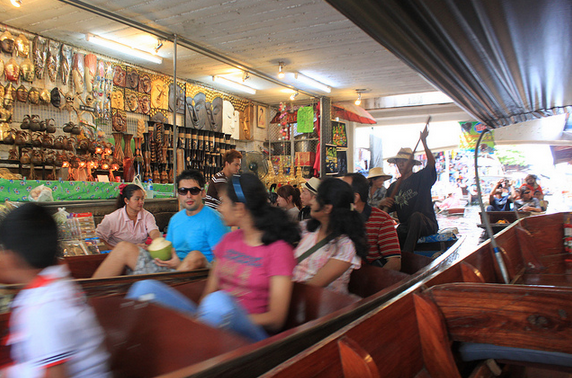 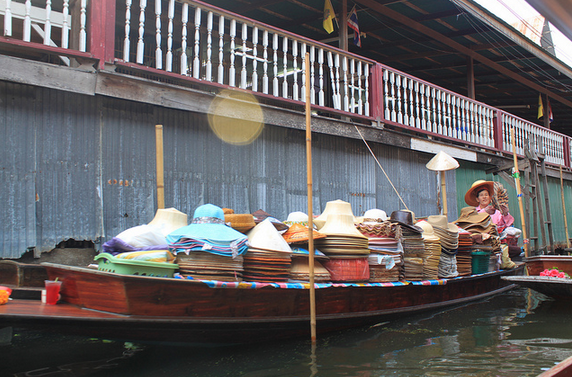 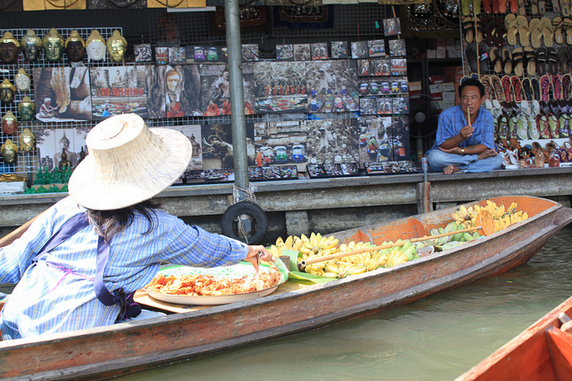 I felt a bit uncomfortable. Maybe it’s because I don’t like flea markets, but it probably has more to do with the fact that I didn’t have any money to spend. More than once a woman standing on shore would lure us over and show me some pretty beautiful items that I couldn’t even afford if I wanted to, so all I could say was “it’s very beautiful, but no thank you.” Then they would say something in Thai to my guide and they’d both laugh, which of course made my brain do the whole “are they talking about me?” thing. “Do they think I’m a cheap bitch?” 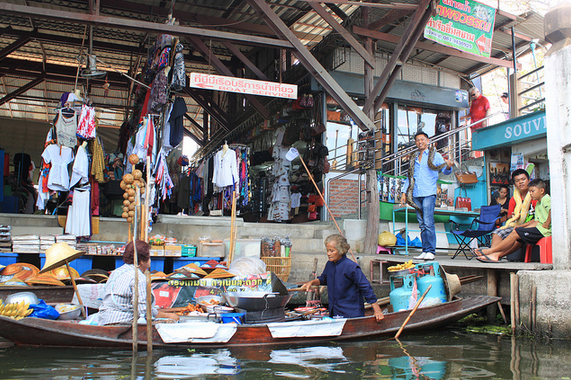 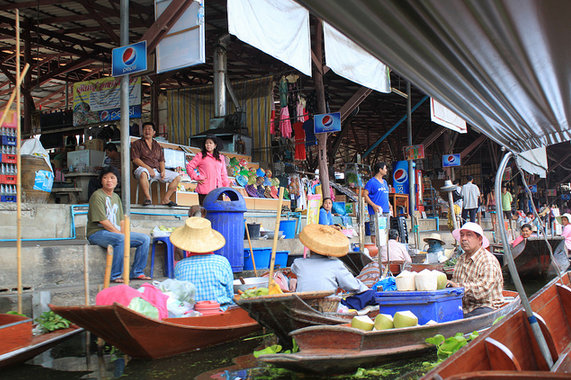 I’d hoped to find some awesome, unique nicknack or delicious spices that I couldn’t live without. Instead I found lots of outdated t-shirts (none I would ever wear, ever), unoriginal souvenirs, fresh coconuts, and grilled bananas. The only locals I saw were those running the stands. But just like the rest of Thailand, everybody is trying to sell you something. Except here it’s worse because you’re trapped in a boat with people shouting at you from every direction. My best advice: do NOT make eye contact. 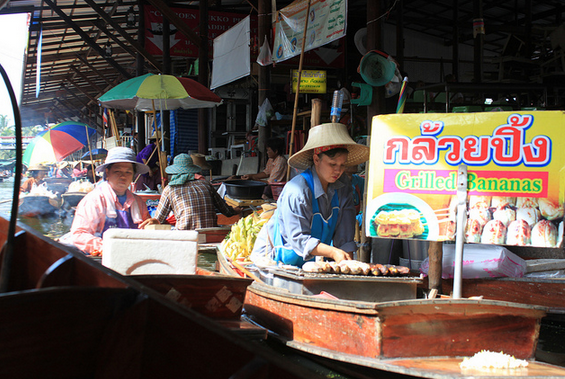 The smell of sweets and grilled bananas masked the murky waters

I’d like to think that I’m a polite person, but I’ve never said “no thank you” so many times in my entire life. By the end those words had lost all meaning and were now becoming increasingly hostile.

I’m not sure if all boats do this or it’s just because I wasn’t buying anything, but they dropped me off at a market at the end of the canal for 15 minutes. I struck up a conversation with the shop owners who were stirring coconut sugar, so they let me give it a go. Then they took the finished mixture and started scooping it out as these fresh new drops of coconut sugar. I tried one, and of course I was hooked. I needed an entire bag immediately. I also picked up some coconut pancakes (which are remarkably similar to ‘nilla wafers) and enjoyed a nice snack on the way back through the market. Having my mouth full became a good excuse not to talk to vendors. Double score! 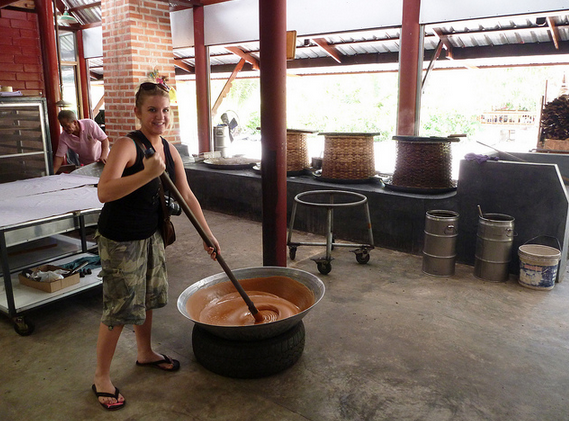 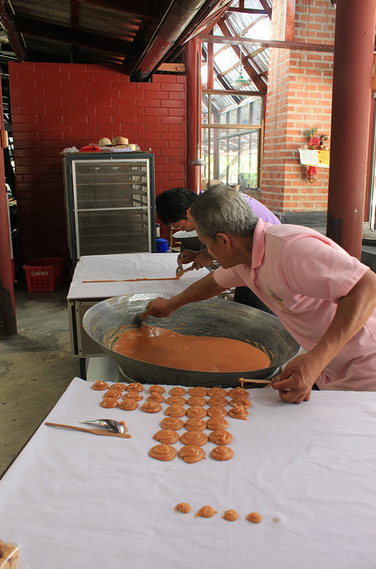 Apparently it’s very easy to bargain your way to a great deal, but if there’s one thing I hate more than shopping it’s bargaining. If you ever go there I hope you have better luck than I did!

15 Things I Wish I’d Known Before Traveling to Thailand

I just got back from my biggest trip to date, and if I had to sum it up in one...
Continue Reading

Getting Down and Dirty on ATVs in Thailand

Every day in Bangkok I found myself chugging endless amounts of water while wandering around in the hazy, humid streets...
Continue Reading