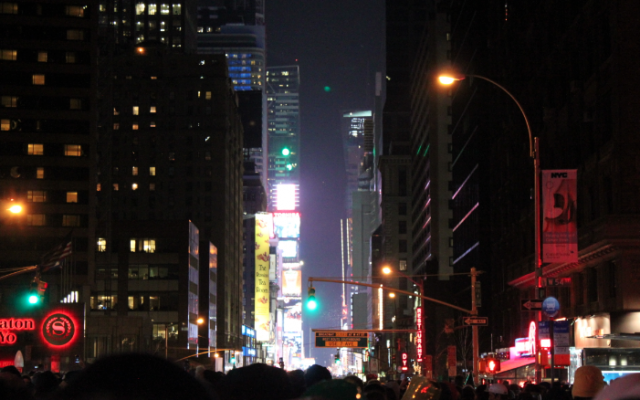 People from all over the world see Times Square as the place to be on New Years Eve. Ringing in 2011 as the 106th celebration, about a million people gather every year to stand in the cold and wait for the world’s largest crystal ball to descend atop One Times Square. For 39 years, Dick Clark’s Rockin’ New Years Eve has broadcasted the celebration to millions of people gathered around televisions for the final countdown. It’s known as a “once in a lifetime” thing that you’ve just got to do if you have the opportunity. Well I guess I’ve lived three lifetimes, because this past weekend I spent New Years Eve in Times Square for the third time.

The first time I saw the ball drop in Times Square was six or seven years ago, and I swore I’d never do it again. The crowds, the pushing, the waiting—the annoyance. But it’s hard to deny your loved ones the opportunity when they’re in town for the holidays. This year my mom made the trip just to spend New Years Eve in Times Square. I guess it’s true the third time’s a charm, because this time around it wasn’t so bad. Probably because I finally learned to enter Times Square by foot instead of by train. We had a cab drop us off on 57th and 7th, and walked down through the barriers before being stopped by a wall of people at 55th and 7th. We were just over a half mile away from the ball, which could have easily been mistaken for a glowing pencil eraser in the distance. Also it was close to 40 degrees outside, and there wasn’t any freezing rain pelting me in the face like the years before.

When you arrive in Times Square, you’re there for the long haul. If you have to step out for any food or bathroom breaks you’ll lose your spot. We didn’t have it in us to dehydrate ourselves and stand in the same spot for 12 hours, so we got down to Times Square around 8pm. Some people arrive in the early afternoon to stake out a place right in the center of all the action. The rest of us, semi-sane people, usually end up about 10-16 blocks away by coming in the early evening. The only entertainment around us were the people next to us; no music or TV cameras. My mom can’t go into any social setting without making small talk with everyone around her, so she made friends with some fellow Midwesterners who made the drive in from Michigan. I guess the New York way of life has jaded me because I’m the exact opposite. I always assume that those around me don’t want to be bothered, or they don’t speak English at all, so I just keep to myself. 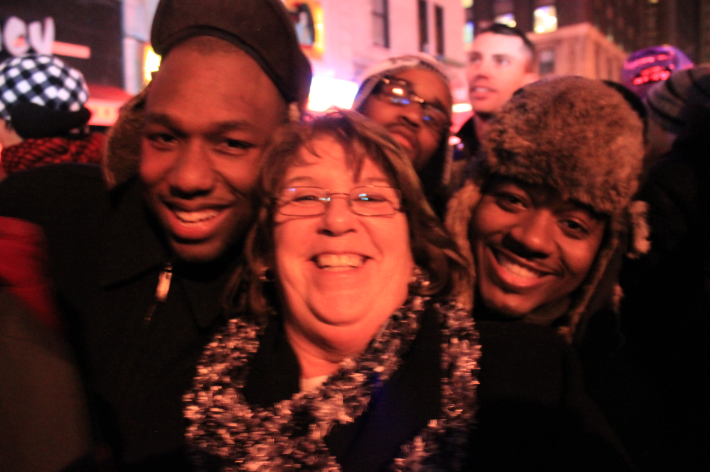 After the ball was raised at 6p, the clock counted down the final seconds of every hour to the beginning of a new year across different time zones. At 1159p the final 60 second countdown began and we all forgot about the people next to us stepping on our toes or pushing their elbows into our sides. We were in the last 10 seconds of 2010 and a bit overexcited, as the crowd began yelling even louder “10-9-8-7-6″ rather quickly. The last five seconds seemed to have lasted twice as long, followed by the sound of one million people screaming, blowing horns, whistling, and kissing those around them. The ball had dropped, “2011″ was glowing beneath it, and the fireworks fell over Times Square.

The fireworks in Times Square and Central Park at midnight.

Almost just as quickly as the countdown had happened, people began to file out of Times Square, many heading north to watch the fireworks over Central Park. I made my way towards Columbus Circle in a matter of ten minutes to catch the finale on film.

The fireworks finale in Central Park.

While it wasn’t so bad this time around, I hope that if I ever end up in Times Square for New Years again I’m at least at an apartment party on a balcony overlooking the sea of one million people below. But let’s hope that New Years 2012 holds something a little more unique and exciting for me. How did you spend your New Years? Where in the world would you like to celebrate next year?

Happy New Year everyone, and I hope 2011 brings you nothing but good fortunes and exciting adventures!

What’s Next After Making It In NYC?

For the past twelve years I've been working towards one massive life goal— move to New York City, finish school, get...
Continue Reading